In that day,” declares the Sovereign Lord,“I will make the sun go down at noon  and darken the earth in broad daylight. Amos 8:9 NIV 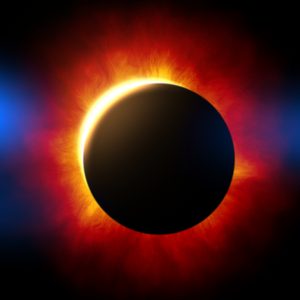 As many of you know, I became a Christian when I was watching Star Trek as a lonely and confused 17 year old teen. God spoke through a Life magazine article titled The Groovy Christians of Rye, New York. I was skimming the article while watching my favorite show. I was, am, and most likely will continue to be fascinated by the stars, often wondering what is out there. I remember wanting to be an astronaut as a middle schooler and an astronomer as a teen. Unfortunately, I am not a terribly coordinated and athletic person and my math skills are limited to being able to add and subtract quickly in my head. Astrophysics was beyond the gifts I had been given.

God saw fit to keep me earthbound and sent me on a journey in public health nursing where I would see, first hand, the devastating results of child abuse, domestic violence, drug addiction and poverty. My nursing skills would be invaluable when my 3 year old daughter was diagnosed with a brain tumor.

However, my fascination with the universe continues to this day. I love science fiction and I enjoy exploring the science behind creation. I still remember, roughly 6 months after becoming a Christian,a new friend handing me a copy of the first book of CS Lewis's science fiction trilogy, Out of the Silent Planet. I was thrilled to discover that Christians not only read, but wrote, science fiction. I will list a few of my favorite books at the end of the post.

Is the coming eclipse a sign of God's judgment on America?

Recently, I was startled to learn that some Christians were saying that the coming eclipse might be a sign of God's judgment on America. Google it. Rev. Mark Creech wrote The Solar Eclipse: A Sign of Judgment for America?

It's significant, I think, that the coming solar eclipse on August 21st is called the Great American Eclipse. It will arch the country from Oregon to South Carolina. This total eclipse will touch only one country: the United States. A century ago, the total eclipse of 1918 swept from the west coast to the east coast too, but it also visited the Bahamas. This one, with its possible implications of a coming judgment, seems strictly for America.

America is definitely ripe for judgment. This nation has become a fountainhead of moral putridity, and its influence is global. Judgment is always an act of God's justice against sin, but it can also be an act of his mercy. When God judged Adam and Eve for their sin, sentencing them to death and casting them out of Eden, it was an act of mercy lest they should live in an eternal state of depravity

…Is it a sign from the heavens calling upon our nation to turn from its sins and to Christ or suffer the consequences? I don't really know. What I do know, however, is that we would be wise to treat it as though this very well may be the case.

Charisma Magazine posted How You Can Pray During This Rare Solar Eclipse.

To start with, the Talmud does in fact state that an eclipse Is a bad omen for the world, a darkness coming because of sin. However, the ancient Jews knew that eclipses were natural phenomenon and could even predict them. The rabbis viewed eclipses as warnings against sin and judgment. Some held that eclipses were an opportunity for prayer and introspection.

What is a solar eclipse?

In What is a Solar Eclipse, it is defined as:

An eclipse of the Sun happens when the New Moon moves between the Sun and Earth, blocking out the Sun's rays and casting a shadow on parts of Earth.

The Moon's shadow is not big enough to engulf the entire planet, so the shadow is always limited to a certain area (see map illustrations below). This area changes during the course of the eclipse because the Moon and Earth are in constant motion: Earth continuously rotates around its axis while it orbits the Sun, and the Moon orbits Earth. This is why solar eclipses seem to travel from one place to another

The article goes on to define a total eclipse as:

Why the sun's location and the rotation of the moon and earth are vital to life as we know it.

I have read a number of articles that point to the exquisite alignment of factors that make this planet perfect for life. For example, read What is it about Earth that makes it just right for life? on the website, How Stuff Works. In the article, they discuss the Goldilocks Principle. The Goldilocks Principle applies Earth, Mars and Venus. It appears the Earth's atmosphere is *just right.*

Venus' atmosphere is too hot and heavy to sustain life while the atmosphere on Mars is too thin and frigid. That leaves Earth balanced between two inhospitable extremes.

Here are a couple of pertinent observations from the article.

The right moon: Our large moon ensures climate stability by minimizing changes in planetary tilt. If our planet didn't have a tilt, it wouldn't have seasons. Likewise, a severe tilt would result in extreme seasons.

The right star: The sun provides Earth with the energy for life and is thankfully rather stable. Imagine baking a pot roast with an oven that might suddenly surge in temperature, die or explode. It wouldn't work for your pot roast, and it certainly wouldn't work for life.

Another article, 15 “Goldilocks" Factors That Allow Life on Earth to Exist, points out:

1. Proximity to the Sun allowing liquid water.
This is essentially the greens-fee for any form of life in the universe.  Yes, it's possible that life can exist without water but those ideas are purely theoretical and no empirical evidence exists to support the assumption.

Our moon has a remarkable, stabilizing affect on our planet.  Without the moon, the rotation of the Earth would result in a day that averages about 4 hours.  The moon has slowed us down to a comfortable 24 hours and has also stabilized Earth's rotation on its axis.

8. Stability of the Sun as a star.

Our sun is actually a very average star in terms of size and activity.  That's a good thing.  That means the radiant heat and radiation is typically consistent although occasional solar flares do show up to send out bursts of radiation.  Fortunately we have survived those rare bursts for thousands of years.  Our sun is also a solitary star.  It's believed that 85% of stars in the Milky Way are binary stars.  It's interesting to think about two stars orbiting each other, but for planets in a solar system the gravitational forces would wreck havoc on the planets and probably cast asteroids and comets around like shot from a shotgun.

3. Stable Rotation: Earth's rotation brings the sun up each morning and, thankfully, puts it back down. If it weren't for this, one side of the world would be unbearably scorched and the other would freeze life to death. So you know, the moon is stealing some of Earth's rotational energy, slowing us down by about 1.5 milliseconds every century. If you can hang around for about 140 million years, you'll finally get that extra hour in the day you've been wishing for.

What am I driving at?

In the beginning, God created the heavens and the earth.(Gen1:1). God designed every aspect of this planet along with our sun, moon, solar system, placement in the Milky Way, etc. His was not a "let's throw it out there and see if it works" sort of creation. He was fastidious in His plan for the perfect place for His people.

So, when that eclipse happens on August 21, consider it to be a demonstration of His deliberate planning. He gave us a wonderful home. Eclipses occur because of the God- designed, consistent rotation of the earth and moon. In fact, it would be concerning if eclipses did not occur.

I plan to enjoy God's wondrous creation during the eclipse and think about his incredible and meticulous plan for our well being. The eclipse is an example of his love, not his judgment.

Eclipses are common in the world, not rare,

In the post, Solar Eclipses for Beginners, there is a chart which shows how many total eclipses will occur in the span of 6 years. For example, in 2016, there was a total eclipse which could be seen in Sumatra, Borneo and Sulawesi. Strangely enough, I do not remember hearing famous Christian leaders discussing the possibility of God judgment on Borneo. This lovely island (the third largest island in the world) is home to 21 million+ people.

Sometimes, I think we can become a bit egocentric in America. If it happens to us, it must be isuper mportant, because…why? I think this is worth mulling over and I would love to hear your thoughts. 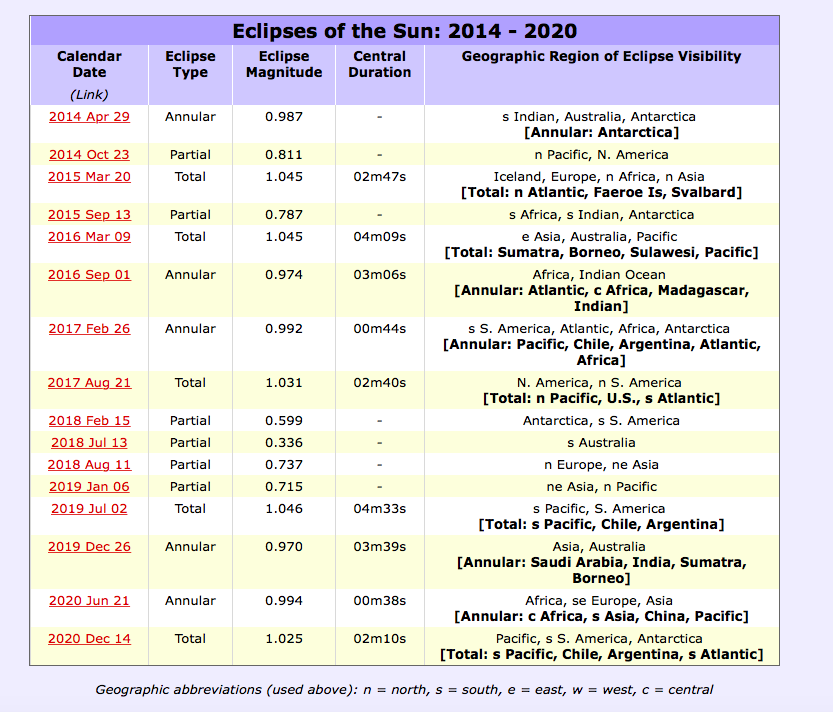 Science and fantasy fiction with a faith bent

Here are a few of my favorites. I would love for readers to suggest others.

Out of the Silent Plant Trilogy by CS Lewis

The Lamb Amongst the Stars Trilogy by Chris Walley

Unwind Dystology by Neil Shusterman (My son-in-law and I enjoeyd these books so much that he would text me from work when he read on break.) What does being alive really mean?

A Canticle for Leibowitz by Walter Miller

The Sparrow by Mary Dorai Russell

The Book of Strange New Things by Michael Faber

The Wrinkle in Time Quintet: Books 1-5 by Madeleine L'Engle

Do I really need to list The Lord of the Rings by J.R.R, Tolkien?

Updated 8/19/17: A really funny post about prophecy and the eclipse-wish I had thought of it.

Special thanks to our reader Ian who hails from acroos the Pond and is therefore not included in the *American Eclipse Judgment Day.*

Read Total Eclipse of the Mind by John Swanson. Here is an exmaple from the post in which he is answering questions by proving this exlpipse is a sign.

Jerusalem was originally called “Salem” in the days of Melchizedek (Genesis 14:18) who was a foreshadowing of Christ or possibly even a Christophany.

If that isn’t interesting enough, the closest road to the exact point where the two eclipses cross is Salem Road in Makanda, Illinois. What are the chances of that?

You got me there… not too great… but again, what Biblical text tells us to look for this sign of two eclipses crossing on Salem Road in Makanda, Illinois? Didn’t see those names in my Bible concordance.

After crossing Salem, Oregon, the path of totality then crosses Madras, which means “Mother of God” (reminiscent of the Revelation 12 Woman). Then it crosses the city of John Day, which of course reminds us of the Apostle John who recorded the Book of Revelation and described to us the Day of the LORD.

Ok… you’ve lost me now… My name is John and I think I am going to call it a day!

After that it crosses Weiser, Idaho, which is German for “wise man”.

Ian- thanks. I needed to read that!