“For my part, whatever anguish of spirit it may cost, I am willing to know the whole truth; to know the worst and to provide for it.” ― Patrick Henry link 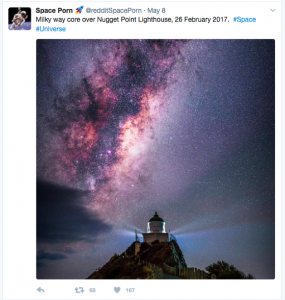 This post provides a perfect link link between The Little Blog That Roared.* The Controversy at First Baptist Church, Sapulpa, OK which illustrates the defective nature of 9 Marks style discipline and the anticipated Friday post which will be about another church which implemented the 9 Marks discipline playbook.

The saddest aspect of these incidents is that 9 Marks and Mark Dever refuse to open themselves to an in-depth case study on what is going wrong. They suggest that these churches are not doing discipline correctly but they can do nothing about it. However, they welcome anyone to be a *9 Marks church* on their website. I contend their organization holds some moral responsibility if it allows such churches to post their names on their website.

Our good friend, Todd Wilhelm, has offered to release his expectation of privacy to allow his case to be discussed in an open and thoughtful manner. 9 Marks outright refuses to do so.

TWW has posted a permanent page of abusive church discipline cases. 9 Marks must accept that something is not right if their BFFs like Matt Chandler act in outrageous ways to apply 9 Marks style church discipline.

Since they refuse to throw open the shutters to the internal workings of their organizations, it is left to us outsiders to assess the abusive aspects of 9 Marks style church discipline. They have little grounds on which to protest since they have refused the offer of Todd Wilhelm. In fact, there are more and more people who are willing to have their unjust discipline discussed in the public arena. It is odd that the leaderships of churches uniformly refuse to do so.

Authority driven pastors do not see themselves as possibly contributing to the problem.

Recently, the 9 Marks website posted Nine Lessons for Pastors Facing Leadership Conflict. I could not wait to see if they presented the possibility of the pastor contributing to the problem.

Two years into our church plant, we faced our first major crisis. Two elders left the church, but not before raising some serious accusations against me as the pastor. Suddenly, our young church had entered into the murky, dark, choppy waters of leadership conflict. As you might expect, the resignation of these two elders led to a series of very difficult members’ meetings.

I searched and searched for some mention of the issues raised at the membership meeting. Alas, those issues are not revealed and defined. Instead, the problems were foisted upon the real or imaginary wolves.™

And every church experiences it. Jesus spoke of false prophets who would come in among the disciples (Matt. 7:15–20). Likewise, Paul warned the Ephesian elders that wolves would arise from among them and would not spare the flock (Acts 20:29–30). Confronting such threats necessarily involves conflict.

Is it true? Who knows? 9 Marks ain't talking. I have been watching the TV series on The Tudors which looks at the life of Henry VIII and his wives. Of course, in Henry's eyes, his wives were the problems and getting rid of them was a full time occupation for his advisors. Rarely, if ever, did King Henry ever consider that he was the problem.

Here is what this 9 Marks pastor believes he should do during a leadership conflict.

Some of this sounds good, like turning the other cheek, loving your people, etc. How I would love to see more of this! Wade Burleson wrote a fantastic post in which he demonstrated these qualities in a church conflict in his church.

Unfortunately, what is absent is glaringly obvious to those of us who are not pastors.

The article does not acknowledge that it could be the pastor who is the problem. This omission is deeply concerning to TWW. Sadly, it appears that the pastor is somehow above the fray and must deal with the ornery little guy. If he grits his teeth and smiles a lot, maybe he will get through it. However, you can always institute church discipline.

Pastors should occasionally mingle with the bleating sheep. Maybe they can even learn something from them.

The Gospel™ Coalition called attention to these 9 Marks articles: Pastors, Learn From Non-Pastors and Pastors, Spend Time with Non-Pastors. The former post was taken from the latter post.

Here is a tweet I sent out this morning. 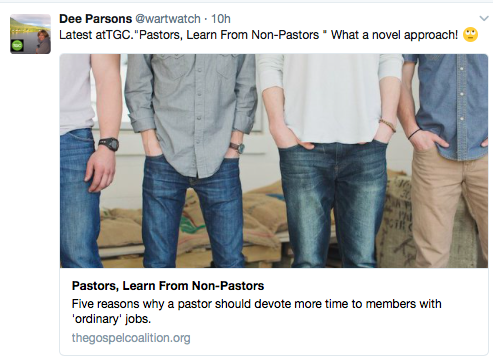 I remember a sermon that I heard in a large, Calvinista church in this area. The pastor was strutting around the stage, railing on people in our area who think they are smart because they have have PhDs. But, according to this pastor, they are really just "dumb sheep." He, of course, is the smart one.

Here are a couple of quotes from Pastors, Spend Time with Non-Pastors along with some comments from me.

Maybe, just maybe we should admit that there are pastors who are bullies.

The Gospel™ Coalition posted Pastoral Bullies by Erik Raymond. Raymond uses an example from 1 Samuel involving the abuse of Eli's sons. Here are some of his conclusions.

Nothing will change until open and honest case studies are used to help us learn from church conflicts.

These are all good points on pastoral bullies. However, until 9 Marks and The Gospel™ Coalition call out members of their organizations, nothing will change. Are there people out there who have the guts to open themselves up to a case study? Many pastors are probably glad that their health professionals must undergo review via Grand Rounds, etc. Yes, they are painful. But they prevent the same mistakes from happening again. Why are churches exempt?

TGC and 9 Marks refuse to discuss the frequent fails of pastors and church discipline within their groups. It all gets swept under the rug. Remember CJ Mahaney, Mark Driscoll, Matt Chandler's bumbling abuse of Karen Hinkley, and Darrin Patrick? What about Todd Wilhelm's abuse by UCC Dubai?

It is time to think outside of the same old, same old of pretending that all is well. For those of you who do not know what I mean by case studies, here is a good synopsis.

A case study is an account of an activity, event or problem that contains a real or hypothetical situation and includes the complexities you would encounter in the workplace. Case studies are used to help you see how the complexities of real life influence decisions.

Analysing a case study requires you to practice applying your knowledge and your thinking skills to a real situation. To learn from a case study analysis you will be "analysing, applying knowledge, reasoning and drawing conclusions" (Kardos & Smith 1979).

According to Kardos and Smith (1979) a good case has the following features:

Until churches get smart and vow to learn from their mistakes and abuses, TWW and others will be here, evaluating and exposing the problems in churches.