“General Snippet: I warn you, madam – I know the entire Geneva Convention by heart!
Grand Duchess Gloriana: Oh, how nice! You must recite it for me some evening; I play the harpsichord.” The Mouse that Roared link 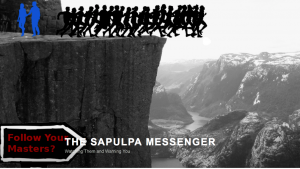 * This post is about a group of fine folks who wanted to get the truth to the members of First Baptist Church in Sapulpa OK. They started a blog called The Sapulpa Messenger. We heard from some of those who contribute to the blog.

Their story reminded me of one of my favorite books, The Mouse That Roared. If you haven’t read it, you must. It will make you smile and think at the same time.

The story starts with a new pastor enamored of church discipline a la 9Marks.

This story began when a new pastor is called to lead FBC. Smokey Hurst seemed like he would be a good fit for this congregation that would not have defined themselves as a Reformed congregation. Before Smokey came, most would not have recognized a reference to 9Marks. However, this was a group of people that were deeply committed to the church and to their faith.

Smokey had the privilege of playing in two national championship games, three Big XII championship games, and a total of five bowl games while at OU. But, his greatest contribution was the spiritual leadership he gave to the team. Coach Stoops asked if he would remain on the team another year because of the influence he had with the players. He graduated in the fall of 2003 with a Bachelor of Science in Environmental Design and had minors in History, Geography, and Business. Smokey and Meagan were married in the spring of 2003. After graduation, Smokey began his own landscaping company. Starting with one employee, his business grew to 25 employees in four years. At the height of his business, God called Smokey to walk away from it all and go into full-time ministry, so he sold everything he could and moved his family to Fort Worth for seminary in the fall of 2008. Smokey received his MDiv degree from Southwestern Baptist Theological Seminary, Fort Worth in 2011.

As you may know, Oklahoma is a big football state and it appeared that Smokey, a former OU football player, would fit right in. Dany Daniel served as an interim pastor until Smokey arrived. Daniel was very supportive of all that Smokey wanted to accomplish at the church.

And so it began. You will swear you are reading a Calvinista playbook.

The church was led by deacons which is common in many non-Reformed Baptist churches. Smokey was allegedly determined to change the way the church was run. He wanted to disband the deacons and install elders, emphasizing elder rule. This idea was not well received by the church members. So, according to our sources, the deacons kept their name but, in truth, function as elders.

One former pastor was allegedly fired by Smokey.

This is a church of approximately 500 members. It reportedly has a full time pastoral staff of 6 and one part time pastor. This does not include the office staff. I belong to a thriving church of 600 which makes itself do with two excellent pastors.

The pastor who was fired was well liked by the senior adults in the congregation. Smokey was asked why he fired him. He allegedly told a female member that he was firing him because he was “sinning, lying and stealing.” When confronted by others in the church to provide proof of these allegations, he claimed he never said anything of the sort. The woman was quite upset that he denied what he had originally said and made sure that church members were aware of it.

The church constitution and bylaws were slated to be changed and a membership covenant was to be introduced.

The changes seemed to indicate that the church would become discipline oriented. A link to 9Marks was added to their resource page. These actions reportedly cause a number of members to become concerned. When the bylaws did not change immediately, Smokey decided to interpret them in a way that gave him more authority in the church.

The Sapulpa Messenger was born! Let this be an example to other people dealing with these problems in churches.

FBC had some members who  began to do some research on these changes and found that these actions were becoming common within many churches. They decided to educate the people in the church by starting a blog.

The names of these folks shall remain anonymous since they are concerned about backlash from their new rulers in chief who do not know who is writing this great little blog. Here is how they describe themselves.

We are the handshake greeting you at the church door. We are the faces in the choir. We are your friends in Sunday School. We are the ones who make room for you in the pew.  We are the young.  We are the seasoned.  We are the men and women who built the church, have defended it in the past, and will do so again.  We understand that many Godly men and women have been deceived by a small group of domineering power brokers.  Many have been fooled into drawing battle lines against their brothers and sisters in the name of “unity”.

Many of the people in this congregation are still unaware of the mean spirited and diabolical schemes that have been launched behind the scenes against them.  Our readers know the truth.  Those that have taken the time to investigate our claims and check out the facts realizes how close this church is to the edge.  We have defended you against abusive church discipline, against legalistic contracts, against joining abortion friendly groups, against Calvinist control techniques, and against lawsuits.

We are convinced that eyes will be opened and the congregation will rise and set all things right if we can just get this information into the hands of our friends. It is our prayer that many of our faithful leaders and servants who have rescued this church in years gone by will recognize the challenges we face, though cloaked in secrecy, and stand beside us.

Friends, we need you to do your due diligence and test what we say.  They say “it’s all lies”.  All we ask is that you check it out for yourself.

Here is their main page salvo. I wish I had their expertise! Well done, folks!  Shortly after this video was posted, the 9Marks link was removed from the church’s resource page. It appears that the pastor is really into young earth creationism as well.

The password is only given to those with a need to know.

This groups is not out for revenge. They have been trying to keep this as an in-house matter. However, things began to change when they were threatened by a lawsuit. If you wish the password, you will need to contact the blog and give them a reason to let you have access to it. I do have the password and I am sharing things that are covered on those protected pages.

Things continued on a downward spiral.

What happened to a long time member of the church who was concerned about the secret bonus paid to Dany Daniel?

Here is the story as reported to TWW.

She was the one who discovered the secret bonus money.  She said when she found out that Dany lied to the church about receiving the money she had plans on making a motion at the next business meeting to expose and correct it.  She was open about this and the pastors found out.  She says Dany and 2 other pastors told her to quit talking about it and drop the issue.  She did not stop.  Dany and two deacons then came to her house and told her she’d been asked to stop and didn’t stop. They handed her a paper that documented all the times shed been asked to shut up. It was an itemized list of the Matthew 18 steps.

Thankfully, this woman did not back down. She took it to the business meeting anyway! What a smart, brave woman!

A lawsuit was threatened over the blog’s post on porn-related, third-party aggregate kickbacks to a well-loved supporter of Smokey but the blog prevails.

GRAPHIC TRIGGER WARNING FOR NEXT PICTURE ONLY

This ad has been removed by the radio station so we have removed it here.

In the meantime, an announcement is allegedly made in church that this businessman was going to sue the blog. How silly! The law in this regard is pretty clear. One has to prove that the person knowingly and deliberately lied in order to bring harm to another person. This picture does not lie. It appears that the businessman thought better of his proposed actions and decided to ditch the lawsuit as well as the third party aggregations.

Atta way to go Sapulpa Messenger! Thank you for cleaning things up

Then there is the story about a man and woman, long time church members, allegedly getting perp walked out of an Awana meeting!

Members who knew about this situation reported it to me. It is alleged  that this couple, both members, had worked for a long time leading the Awana club. For those of you who are in the know, it is sometimes hard to get dedicated, good leaders and they were reportedly excellent role models.

Apparently the husband got under Smokey’s skin at a church meeting in which he reportedly asked that proper procedures for meetings be used as defined in their bylaws. Smokey allegedly thought his authority was being questioned.

One night, during the Awana meeting which this couple was leading, the meeting was interrupted by an off duty policeman. The couple were asked to meet with him outside immediately. They were informed by this officer (who is a church member) that they would not be allowed to return to the class due their questioning of the pastor’s authority. They were also allegedly told that they would no longer be allowed to serve in any leadership capacity in the church. However, Smokey stopped short of throwing them out of the church.

When the woman asked why she was being thrown out of the class, she was allegedly told that her husband was the head of the household so she had bear the punishment as well.

Things for current members of FBC to consider

I wish I could show you all the posts written by The Sapulpa Messenger. They have been writing since 2015 and they have covered everything from the history of Calvinism to current day events such as Karen Hinkley and The Village Church. Let me leave this post with some recommendations for the members of FBC.

TWW will keep the folks of The Sapulpa Messenger in its thoughts and prayers. We would love to do a follow up on many other issues that we did not have time to address here. Well done!

Finally, for those from 9Marks who read this post, this is just one more 9Marks fail. The system is broken. 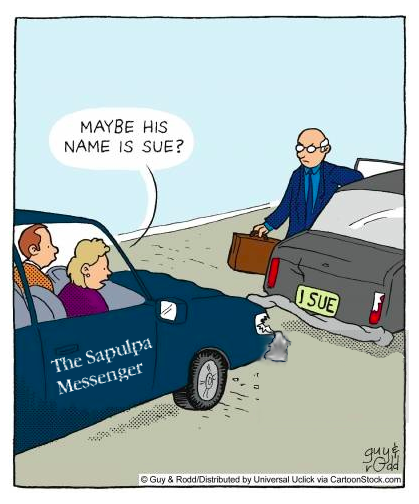