“You come of the Lord Adam and the Lady Eve," said Aslan. "And that is both honour enough to erect the head of the poorest beggar, and shame enough to bow the shoulders of the greatest emperor on earth. Be content.”― C.S. Lewis, Prince Caspian link 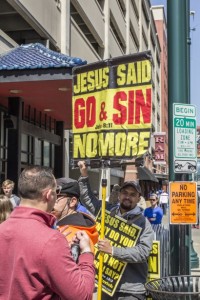 Before I begin, I want to mention two things that this post is not.

1. It is not meant to be a critique of a woman who has found comfort through her own tragedy. That is her story. However, her solution should not be expected to be appreciated or followed by others.
2. This is not meant to be a denial of the reality of sin in our life..

Two things that I want to question.

1. Is it the purpose of God to make you feel like a sinful worm as you deal with tragedy?
2. The Gospel Coalition editorial staff must believe that her method of coping is something to be emulated. Is it wise to push the sin issue in the midst of terrible pain?

Why I think that I can approach this issue with understanding.

As many know, my daughter Abby was diagnosed with a rare, extremely large malignant brain tumor when she was 3 years old. The prognosis was not good. Her tumor had developed large collateral vessels to feed the tumor. Bleeding in the brain is quite serious. For years, we wondered if the next day would be her last. For the first year, we coped with two very long brain surgeries along with a diagnosis of residual tumor after the second surgery.

By the way, as an aside and not to get into a political debate, it was during this time that I learned of Ben Carson as Abby's diagnosis was tossed around by a number of experts. I eventually got to meet him much later.  My opening greeting was "So glad to meet you here amidst smiles and coffee as opposed to watching you take my little girl to the OR." (My neurosurgeon would allow Abby to fall asleep in my lap and then carry her in his arms to the operating room.)

I get tragedy. I get the fear of daily thinking that this could be the last day of life for my sweet child. I coped with fear, anxiety and depression over the course of years, resulting in chronic IBS for me and occasional PTSD moments. I expected God to take her home and it was several years before I began to hope for a different outcome.

During this time, I never experienced condemnation or accusations of being sinful. In fact, I experience the love of Christ throughout the years. I prayed that He would help me walk through this difficult time and be a good parent to my two other children and to be the best mother I could be to Abby during her struggles. We had some wonderful church and neighborhood friends that allowed us to fear and grieve over a long period of time. We had a pastor who would come by and visit us for Abby's MRIs 4 years down the line. Not one person condemned me for being sinful. In some of my weakest moments, dear friends would grab my kids to give me some time to grieve and rest.

They taught me much about standing by people who are grieving or fighting disease over the years. It is something I now try to do for others.

Grief or a sin riddled mind?

Miscarriage and the Confusion of Sinful Grief by Jamie Carlson was posted at The Gospel Coalition website  on 11/6/15. She expressed her concern for the sins she committed after her miscarriage. I stopped for a minute, confused. Instead of discussing her pain, she felt she needed to discuss her sin.

After my miscarriage, it hit me—grieving and sinning go together. Perhaps the most confusing and ongoing part of miscarriage recovery was fighting temptation and rooting out the sins laid bare by suffering. Grief came as expected, but the intensity of emotions made it so difficult to distinguish temptation and sin from grief that I was paralyzed—unable to move forward toward healing.

She claimed sin and Satan were attacking her through baby announcements from friends.

At every announcement of pregnancy, every sight of a pregnant friend or the perfect stranger with a newborn at the Target check-out, and every ultrasound photo on Facebook I felt three simultaneous reactions: genuine joy for their happiness, genuine grief for my loss, and temptation in manifold expressions. The constant need to fight temptation was exhausting.

Is the following description sin or depression from grief and  hormones?

I became increasingly tired. Selfish and sometimes mean thoughts were crowding my mind. I was lost in the mire of sin and grief, unable to distinguish one from the other. My heart was wounded, angry, hard. My desire for righteousness was weak, my devotions wasted as my ability to concentrate waned.

The struggles with sins in her life

1. It was self-defense, in part, and yet even in my grief it was sinful to minimize the blessing and value of new life and to not rejoice with those who were rejoicing.

2. (ed. Feeling annoyance at each baby announcement)  Although I never actually opened my mouth, I still gave into an internalized anger and bitterness that was unjust.

3. (Feelings of jealousy) Wanting a baby wasn’t even so much the point of my jealousy; I was jealous of the joyful attention other expectant parents received.

A sin riddled mind or a human grieving and working through the pain?

Giving into temptation didn’t mean I was jealous of their healthy baby; I just wanted my grief to overshadow their joy. Oh, the stench of a sin-ridden mind.

She says that this death was God's best plan!

I failed to trust in the sovereign goodness of God. In my best moments I would remember he doesn’t withhold good from his people (Ps. 84:11). I would trust that in his infinite wisdom this was the best plan for our (and our baby’s) eternal good, to bring the most glory to him.

Fight your sin in the darkest of nights: a recipe for exhaustion.

If you’re in a similar place, I want to encourage you: God’s remarkable provision of sin-fighting grace is sweet in the darkest of nights.

Death is or isn't OK?

In a fascinating example of post positioning, the following article on death was suggested at the end of Carlson's post.

Here are some quotes from Death Is Not 'Okay" by Trillia Newbell that bring a depth to this conversation.

But death is not “okay.” Death is never “okay.”

Death is not “okay” because it’s the result of life in a fallen world. Death is not the way it was meant to be.

So why is death not okay? It’s not okay because even though God made everything good, the Fall rendered the perfect accursed.

…If the Lord intended for death to be okay, then there’d be no need for him to end death. But he will. He promises to create a new heaven and new earth where there’ll no longer be an infant who lives but a few days,

…When I stare death in the face, as I did earlier this year, I can have hope and faith

Jesus gets grief and sorrow and is not trying to beat you up over your sin.

1. It appears evident from Carlson's discussion that she was deeply depressed after  her miscarriage. Her exhaustion in  trying to cope with death righteously appeared to wear her down. I hope that she had a good counselor who could talk with her about the very real physical effects of depression. There are hormones associated with a lost pregnancy which could cause a woman to have depression, anxiety, etc.

2. She made the point that she needed to rejoice with those who rejoice. Since she was unable to do that, she was in sin. However, I wonder how those around her grieved along with her as she grieved. Did she give herself grace to cope with the pain of a very real loss or was she supposed to jump right in and throw baby showers for her friends? Did she take the time she needed to grieve?

3. I hope readers, when coping with the pain and loss surrounding death and dying , never, ever, ever look at their struggle as exhibiting "the stench of a sin filled mind." Good grief-what a burden she bears!

4. She ends by saying that she understands that the death of her baby was the best plan for their family because God only causes good. But, it is evident that death is not OK according to Newbell in the second, TGC recommended post.

5. Like Newbell, when my daughter was so sick, the only thing that I clung to was the hope of eternity with her even if her life on earth was short. I experienced God's promise each day as I wondered if Abby would survive. But I struggled…

6. This statement also troubled me.

"God’s remarkable provision of sin-fighting grace is sweet in the darkest of nights. "

Let me encourage all of you. When you are filled with pain because you or a loved one is suffering, God is not going to require you to do an inventory of your sin. He is going to weep along with you. He did precisely that when He was confronted the grief surrounding the death of His good friend, Lazarus. (John 11:31-35 NIV Bible Gateway)

When Mary reached the place where Jesus was and saw him, she fell at his feet and said, “Lord, if you had been here, my brother would not have died.”

When Jesus saw her weeping, and the Jews who had come along with her also weeping, he was deeply moved in spirit and troubled.  "Where have you laid him?” he asked. “Come and see, Lord,” they replied. Jesus wept. Then the Jews said, “See how he loved him!”

Look carefully at the response of Jesus. He did not rebuke Mary for her "sin filled" mind. He didn't tell her to "Go and sin no more." He didn't ask her why she wasn't out dancing at someone's wedding.

We all grieve differently. There is no normal timetable for mourning. Ecclesiastes says there is a time for mourning and a time for rejoicing. It is perfectly appropriate to mourn a miscarriage and not jump up and down when you BFF gets pregnant. Those who truly care about you will understand. In fact, a real BFF would put her arms around such a friend and weep with her as she tells her of her pregnancy.

You are not a slithering, sin filled worm.

Recently, I read a comment by a woman on another blog. A long time Christian, she spoke of herself as a worm slithering through the mud. Folks, this must stop. You are beloved by the King who came to rescue His people. The Father sees you through the eyes of Jesus, forgiven and loved.

“You come of the Lord Adam and the Lady Eve," said Aslan. "And that is both honour enough to erect the head of the poorest beggar, and shame enough to bow the shoulders of the greatest emperor on earth. Be content.”― C.S. Lewis, Prince Caspian link.