"Having something forbidden is exciting, don't you agree?" 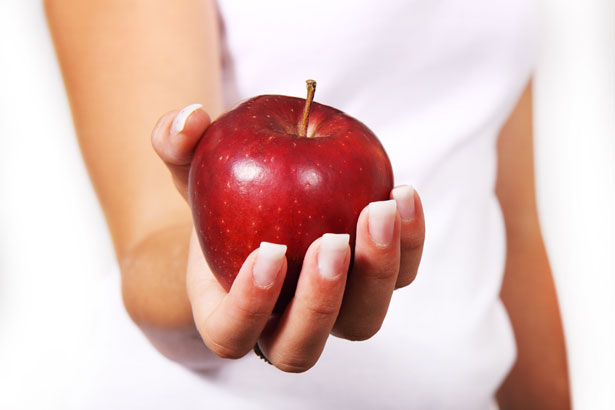 Just when the Duggars are desperately trying to dig themselves out of a deep, dark hole caused by oldest son Josh, the bottom falls out!

It seems some hackers who go by the name The Impact Team have been accusing an online cheaters' website of creating fake female profiles for its predominantly male user base and keeping customer information on file even after users paid $19 to have it completely deleted.

According to a New York Post article published earlier today, the online cheaters' website Ashley Madison was hacked, and…

Bold faced names implicated in the breach include disgraced reality TV star Josh Duggar — accused of molesting five minors — who signed up using a credit card linked to a billing address that matches his grandmother’s home in Fayetteville, Ark., according to Gawker.

The married man, who was at once time the executive director of the Family Research Council, allegedly paid $986.75 during his two-year subscription, the site reported, noting that his interests included “conventional sex,” “experimenting with sex toys,” “one-night stands,” and “cuddling & hugging.”

… many online reviewers have griped about getting strung along by beautiful make-believe women.

Divorce lawyers say the breach is great for their business.

“I think therapists will be busy first and it will ultimately trickle down to us,” said Manhattan divorce attorney Jacqueline Newman.

That's the bad news.  But the good news, according to the NYP article, is that no one's credit card information has been exposed.  (Sorry, couldn't resist 😉 )

the hackers threatened to leak nude photos, sexual fantasies, real names and credit card information for as many as 37 million customers worldwide of Ashley Madison, which uses the slogan: “Life is short. Have an affair.”

As you can imagine, the internet is abuzz with the latest Duggar Disaster.  Stories have now appeared in The Blaze, New York Magazine, New York Daily News, People, katv.com and last but not least Gawker. No doubt every American news outlet with be reporting on this latest scandal.

Furthermore, the shocking news has quickly spread abroad, as evidenced by the following screen shot from the UK Daily Mail. 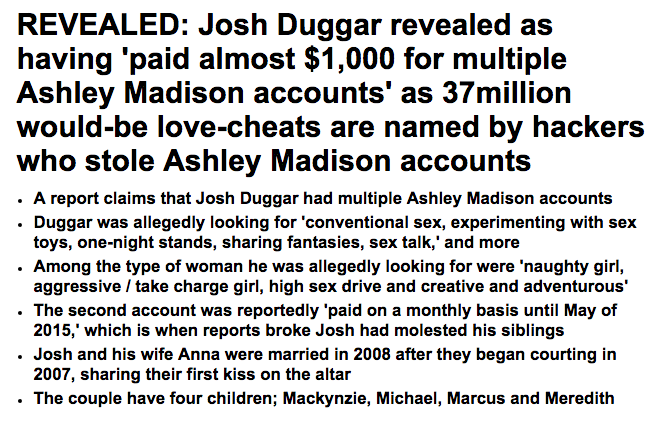 Gawker, which we believe broke the story, reached out to the Family Research Council (Josh's former employer), The Learning Channel, and the Duggar family for comment.  It promises to provide an update if and when it hears back from them.

When I first learned of the news, this old Otis Redding song, which has been brought back by The Black Crowes came to mind.  Looks like Josh, who shares a website with his wife Anna, has a lot of crow to eat (or worse) now that the jig is up. 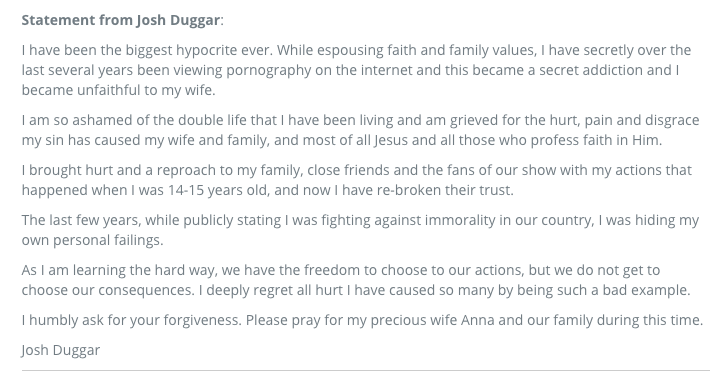