"Last month, Gene was found guilty in Chesterfield County Court of soliciting a prostitute. To this day, he continues to maintain that he is innocent of any illicit activity, though he has humbly acknowledged a significant lapse in judgement regarding his conduct throughout the situation."

So much for doing things the 'King's Way', as KingsWay Community Church, located on Sovereign Grace Drive in Midlothian, Virginia appears to profess.  Gene Emerson, the founding pastor of KingsWay (originally called Southside Church of Richmond), has suddenly stepped down due to what has been described as a 'lapse in judgment'.  Here is how the news was shared on the church website (see screen shot below).

Below you will find two screen shots of the court document for Gene Emerson's case.  As you can see, the charge was Solicitation of Prostitution, and the final disposition was Guilty.  The offense date and the arrest date was May 29, 2015, with Emerson being arraigned on June 9, 2015.  He was found guilty one month later and received a sixty days suspended sentence, along with a fine and court costs.  There is some question as to whether the complaintant is male or female. 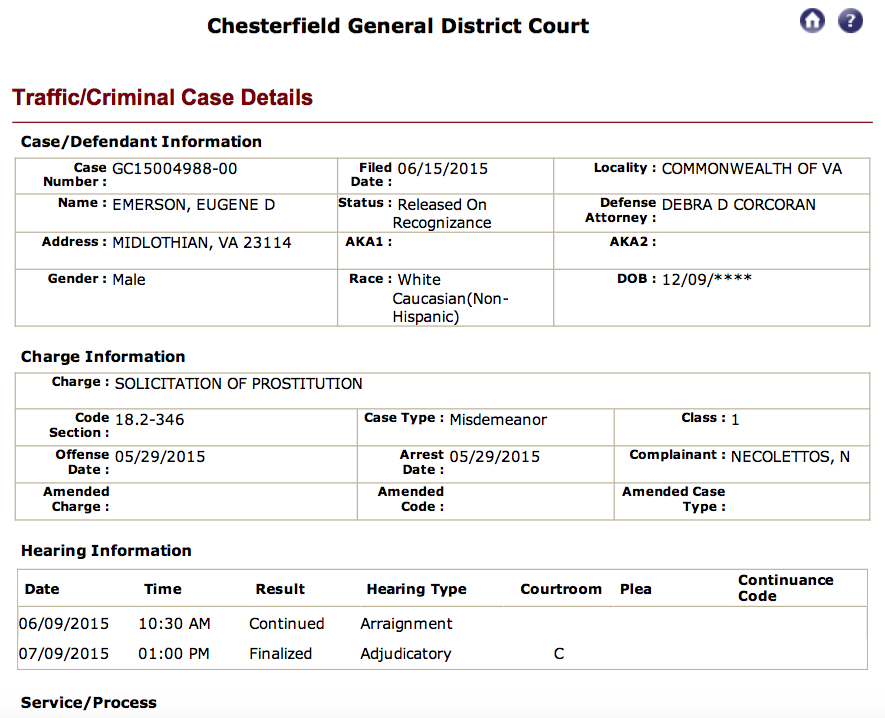 The KingsWay congregation appears to have been kept totally in the dark until the shocking announcement last Sunday.  Just three days after Emerson was found guilty, Matthew Williams, a pastor at the church, explained to the congregation that Gene Emerson is

"very much in need of an extended sabbatical from the normal work of pastoral ministry."

In his July 12, 2015 sermon, The Discipline of Renewal link, Williams, explained that Gene Emerson has been serving as senior pastor there for almost 30 years without a time of respite.  He further stated that the church is behind other denominations like the PCA, RCA and OPC in granting sabbaticals to its pastors.

Just after the 25:30 mark, Williams explained that 2010 had been a hard year for KingsWay, with half the congregation and several pastors leaving.  During this explanation, Williams boldly proclaimed that one of the things he loves about the KingsWay congregation is that "We don't hide stuff."  🙁

He went on to tell them that five years ago Gene was under constant fire and felt like many years of his ministry had been invalidated.  Matthew reassured those in attendance that this wasn't the case, at which point the congregation broke out in applause.  At that point, Matthew had Gene stand up and turn around to witness the congregational affirmation.

Beginning at the 51 minute mark, Gene Emerson addressed those in attendance.  At the 54 minute mark, he told them he recognizes his need for a sabbatical as an expression of his weakness in God that He has appointed so that his hope, his strength, and his life come only from Him and not from his own energies and gifting.  Gene acknowledged that he was being phased out for the time being but affirmed that he wants to finish the race well and finish it with them.  He concluded by quoting 1 Peter 5:10 and Psalm 23 and explained that this is what he needs.  As communicated in Matthew's July 12th message, Gene Emerson's sabbatical was to last six months during which time Gene and his wife would rekindle their romance, their affection, their communication as they are restored together, as God restores their souls together (1 hour, 2 minute mark).  Apparently, Gene and his wife spent two weeks in July on a missions trip to Bolivia.

On August 9th, Matthew Williams shared a message entitled The Goal of our Suffering with the KingsWay congregation.  He said that weakness is what God uses to show His strength.  He mentioned a members' meeting that occurred the evening prior (August 8th) in which this serious matter was discussed.  Matthew, who is now thirty-one years old, then explained that he was just six years old when he and his family came to KingsWay twenty-six years ago. Finally, he stated that Emerson is not qualified to serve as pastor right now.  To listen to this sermon, go here.

Matthew emphasized that when it comes to Gene Emerson, he will NOT:

– Judge or shame him

This clearly shows the double standard that exists in churches affiliated with Sovereign Grace Ministries.  How many horror stories have we heard where SGMers have been both shamed and shunned?

In last Sunday's message, Matthew went on to emphasize the following statement that was also published on the church website:

In his Sunday message Matthew emphasized the statement above about many of them doing far worse than Gene Emerson.  To what is he referring – the child sex allegations?  What does he mean by the statement "Many of us have done far worse"?

He then asked the KingsWay members to give the new leadership a chance to prove themselves, despite his erroneous statement on July 12 – "We don't hide stuff."  Keep in mind that Matthew, who earned a college degree and attended SGM's Pastors' College, is currently pursuing his M.Div. degree from Southern Baptist Theological Seminary through their distance education program. (link)

Now for those of you who may believe prostitution between two consenting adults is a victimless crime, think again.   A New York Times article The Myth of the Victimless Crime ends by making this crucial point:

Whether the woman is in a hotel room or on a side street in someone’s car, whether she’s trafficked from New York to Washington or from Mexico to Florida or from the city to the suburbs, the experience of being prostituted causes her immense psychological and physical harm. And it all starts with the buyer.

Tragically, so many caught up in prostitution are victims themselves.  We must not forget this!  As with the illegal drug trade, demand drives supply.  'Lapse in judgment' or not, Gene Emerson's actions served to perpetuate prostitution.

And let's not forget the loved ones who are feeling terribly betrayed, as well as friends and extended family.  No, prostitution between two consenting adults is not a victimless crime.

KingsWay Community Church has a strong presence in the Neo-Cal corner of Christendom.  As you probably guessed, KingsWay is a 9Marks affiliated church (see screen shot below).

There appears to be a glitch in the 9Marks church search because when we attempted to find 'KingsWay Community Church" on the 9Marks website, nothing came up.  However, when we did a church search of 9Marks congregations in the Richmond, Virginia area, the above information showed up in the list.

And then there's The Gospel Coalition…  Perhaps you're wondering whether KingsWay is a member church of TGC, as we were.

YES IT IS, and Gene Emerson is still listed as pastor (at the time of this posting).  Since The Gospel Coaltion has recently put into place a system for monitoring churches that may not be in full compliance, we believe the powers that be in TGC should be alerted that things are not being done the 'King's Way' at KingsWay from the behavior of the long-time pastor who had no choice but to step down to the interim pastor who we believe misled the congregation by assuring them that… "We don't hide stuff."