"No one makes me laugh and cry, worship and repent, pray and praise more than C.J. Mahaney…"

Thoughts After the Culmination of the Resolved Conference 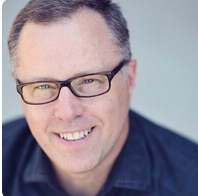 It appears that your 'discernment divas' have really fallen down on the job because we failed to call attention to a guest pastor who spoke at Sovereign Grace Church Louisville over a month ago.

Rick Holland, who currently serves as Senior Pastor of Mission Road Bible Church in Kansas sent out this Tweet hours before making his appearance. 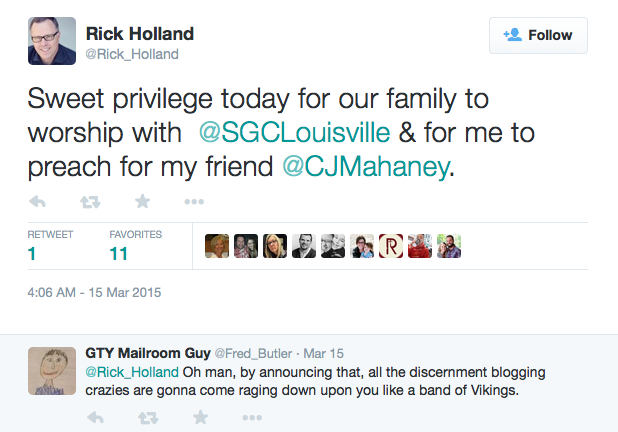 Had we seen GTY (Grace to You) Mailroom Guy's remark earlier than today, we might have chimed in sooner.

For our readers not familiar with Rick Holland, he served alongside John MacArthur at Grace Community Church for 25 years.  While there, he founded the Resolved Conference, which was held annually for eight years.  We knew nothing about it until the 2009 trailer was released in order to publicize the conference.  It was called The Scream of the Damned, and the tone and content of that video made me want to scream!  The following year I shared my concerns.

The Resolved team then launched another conference last summer called Anchored.  The Gospel Coalition announced this brand new conference last year, but as far as we can determine no announcement has been made about this conference for 2015. 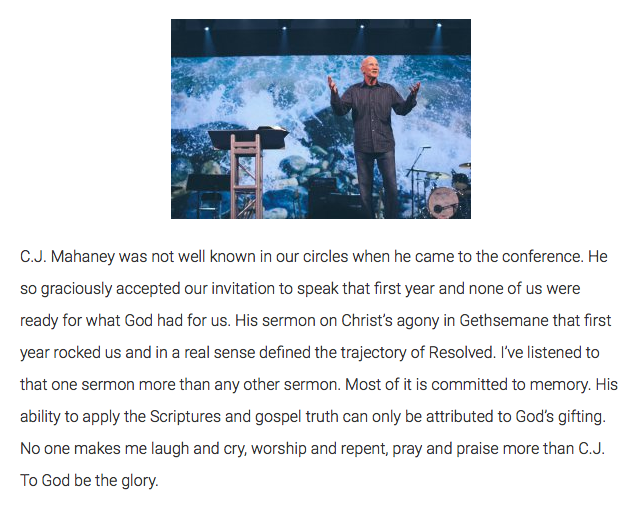 We are astounded by the way C.J. Mahaney's pastor friends continue to stand by their man despite the mounting evidence.

One of the most outspoken critics of SGCL guest preachers is Todd Wilhelm.  Todd's latest post alerted us about Rick Holland's visit to Louisville.  In case you haven't read it, we are including a portion of that post below.  Thanks Todd for your courage to speak out about some extremely serious matters.

It has been nearly two years since I wrote an article about seven celebrity pastors who made their way to C.J. Mahaney’s runaway church plant in Louisville, KY.  These men all delivered sermons at Mahaney’s church – apparently happy to utilize their celebrity status in an attempt to bolster the severely listing ship of Sovereign Grace Ministries and C.J. Mahaney.  If you have been reading my blog you will know that C.J. Mahaney was the leader of Sovereign Grace Ministries during the time period that SGM leadership was doing their best to cover-up a purportedly large scandal of sexual abuse of children in their churches.  Mahaney claimed, and still claims, ignorance of the whole situation, but a child of 3 could detect his Clintonesque lie.

Since the time I wrote my initial article on the shameful seven who preached at Mahaney’s runaway church plant much more evidence has come to light, all very damning to Mahaney and his group of psychophants. Included is the conviction and sentencing to 40 years in prison of Nathaniel Morales.  Morales worked with the youth at Covenant Life Church and sexually abused numerous boys.  His actions became known to church leadership, but they chose not to alert law enforcement, leaving Morales to continue abusing children.  Grant Layman, brother in-law of C.J. Mahaney and a former pastor at Covenant Life Church, testified to this under oath at the Morales trial.  Joshua Harris, who took over duties as senior pastor from Mahaney, also recently admitted this in an interview with the Washington Post.

There is now such a preponderance of evidence in this case that any individual with a lick of common sense would rightly wonder how a “man of God” could, with a clear conscience, accept an invitation to preach at C.J. Mahaney’s church.  Yet there seems to be a handful of  men with consciences sufficiently seared that are willing to make the trek to Louisville.

Rick Holland is one such preacher.  One can only guess at Holland’s motives.  He may say he is standing up for his friend, but I would suggest a true friend of Mahaney’s would advise him to resign from the ministry.  My guess is Holland has a burning desire to become one of the big name celebrities – you can detect it in his tweets and the conferences he organizes and speaks at.  Being a friend of Mahaney’s  used to propel one to celebrity status on the conference circuit. Not anymore.  Mahaney is damaged goods.  It seems nobody has gotten the word out to Rick Holland though, and he apparently is not bright enough to figure it out.  Celebrities like Mark Dever, Al Mohler, John Piper and John MacArthur all used to be vocal supporters of Mahaney, but even though they have never retracted their endorsements of the man, they seem to be doing all they can to distance themselves from him, at least publicly.

Back in June of 2014 Mahaney spoke at a conference organized by Rick Holland.  I, along with numerous others, wrote the conference organizers urging them not to have Mahaney as one of the speakers.  Below is my email.  I never received a response or even an acknowledgment of receipt. As a matter of fact I have a friend, Steve, who managed to have a phone conversation with Holland prior to the Anchored Conference. He attempted to dissuade Holland from having Mahaney as a speaker.  He was obviously unsuccessful. During the course of the conversation Holland told Steve he had never received an email from me, so Steve forwarded him a copy.

Dear Anchored Conference Organizers, I write to you in hopes that you will reconsider having C.J. Mahaney speak at your conference in June.  The man has blackmailed the co-founder of his organization and covered up sexual abuse in his church. That he is still in the pulpit is a travesty, that he is allowed to speak at conferences even worse.Thank you for considering my request.

A brother in Christ,

“Speak up for those who cannot speak for themselves; ensure justice for those being crushed. Yes, speak up for the poor and helpless, and see that they get justice.”  -Proverbs 31:8-9 NLT

“Despite what Baptist leaders may say publicly about “precious children,” when they leave predators in their pulpits and do nothing to help clergy victims, the message they send is the “you don’t matter” message. It is a terribly hateful lesson for religious leaders to teach and it betrays the very faith they purport to profess.  If I had fully believed the lesson that Baptist leaders taught, I would surely be dead by now. But I was graced to have other people in my life – people who worked hard to counter Baptist teachings and to constantly remind me that my life mattered. Thank God for non-Baptists and non-believers.”…Besides, to the extent I feel something akin to a “calling,” it is a calling that comes with the mere fact of being human. It is a calling that comes with being a mother. In fact, it is a calling that sounds for every mother, every parent, and every adult. We are all called upon to protect the young, and I will never understand how so many Baptist leaders can close their ears to that calling.”
-Christa Brown, “This Little Light: Beyond A Baptist Preacher Predator and His Gang,” pages 218-21

Mahaney seems to keep abreast of all the men of God who make their way to Louisville for various functions at Southern Baptist Theological Seminary.  He does his best to persuade these men to make a side trip to his small church plant while in town. I can understand that as one of five pastors for a congregation of about 80 a guy can get worn out attempting to keep up with all the work, so roping a guest speaker to address your church on Sunday morning provides a much needed respite from the weekly grind of preparing a sermon.

You can read the remainder of Todd Wilhelm's excellent post here.