I readily acknowledge I am an imperfect messenger of the gospel of Jesus Christ. There are many things I have confessed and repented of, privately and publicly, as you are well aware. Specifically, I have confessed to past pride, anger and a domineering spirit. As I shared with our church in August, “God has broken me many times in recent years by showing me where I have fallen short, and while my journey, at age 43, is far from over, I believe He has brought me a long way from some days I am not very proud of, and is making me more like Him every day.” 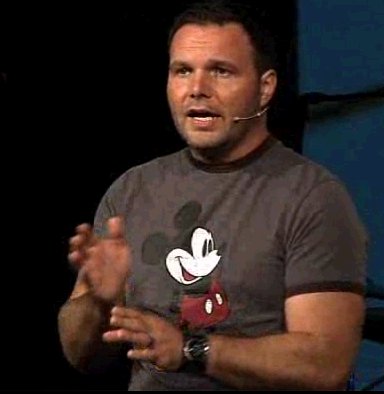 Shock jock preacher Mark Driscoll is once again garnering attention — this time because of his resignation from the church he co-founded back in 1996.  The elders of Mars Hill Church, along with a member of the Board of Overseers, promptly accepted his resignation.  This is how the news broke in Seattle.

It seems that almost every news outlet, both Christian and secular, has covered Mark Driscoll's resignation, and it has been a daunting task to keep up with what is being said and written.  In this post we want to focus on the response of those left in charge at Mars Hill and specifically on their opinion regarding Driscoll's future qualifications for the pastorate.

Surprised by Mark Driscoll's sudden resignation, these MH leaders released a statement on the church website the day after receiving said resignation letter.  What was most disconcerting to us was this portion of the statement (featured in a screen shot below). 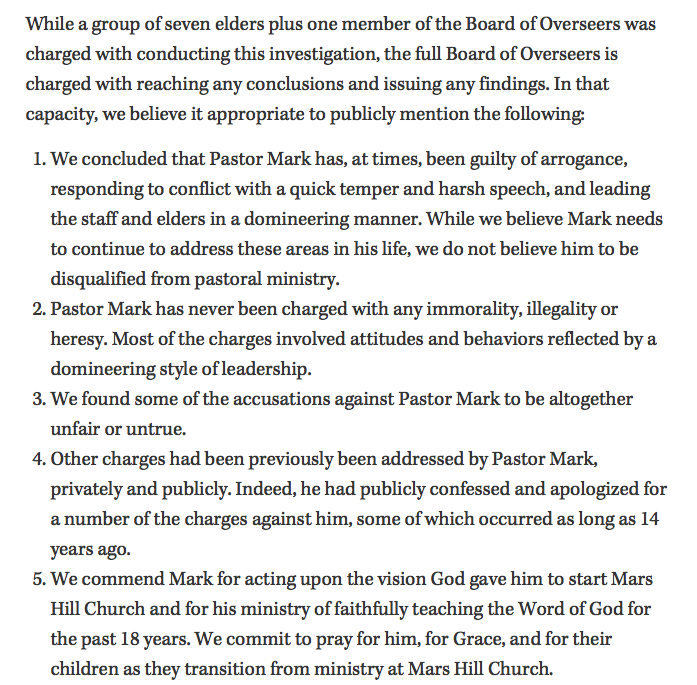 We are incensed by their contention that Mark Driscoll has not disqualified himself from pastoral ministry, as stated in item 1.  They immediately followed with this in item 2:

Pastor Mark has never been charged with any immorality, illegality, or heresay.

It is obvious to the average reader that Driscoll plagiarized multiple times in multiple books. Had he done so in the realm of academia, he would have failed the course and possibly been dismissed from the school.  And if he had done it in the secular realm, he most likely would have been sued because plagiarism is illegal and immoral.  Why is a Christian leader being given a pass?  What a terrible testimony to a watching world!  If this doesn't disqualify Mark Driscoll from the ministry, we don't know what would.

As far as we are concerned, Mark Driscoll's overall behavior has also disqualified him from the ministry.  His infamous remarks about bodies behind the Mars Hill bus were reprehensible.  There is no way he should be allowed to lead a church again.

Then there is his treatment of his wife in a public forum (i.e. Real Marriage).  Does a real pastor blame his wife before a watching world?  Not only that, would a 'real' pastor have written Real Marriage in the first place?

And what about the use of church funds to propel Real Marriage to the top of the New York Times bestseller list for what was it, a week?  If Driscoll had had his way, Mars Hill members would never have known about it.

Then there is the Global Fund, which actually wasn't established for a global outreach at all.  As Warren Throckmorton revealed in a post several days ago:

Dr. Throckmorton wrote a follow-up post on the Global Fund today.  Again, because of the terrible lack of transparency at Mars Hill, how would members ever have known anything about this?

And how about Mark Driscoll's provocative sex talks around he world?  We believe just this aspect of his ministry should disqualify him from the pastorate forever.  To make matters worse, Driscoll has inspired copycats, and there may be no end to the damage being done in the body of Christ by these Driscoll clones.

Michael Newnham, the Phoenix Preacher, has been doing a great job covering Mark Driscoll's resignation.  Xenia, a commenter on his website, posted the letter s(he) believes Driscoll should have written (instead of his non-apology).  See below.

“Dear Brothers and Sisters in Christ,

I write to you with a heavy heart because I know I have hurt so many of you over the years with my arrogance, anger, and bullying. I have stolen other people’s writings, I have cheated to aggrandize myself as an author, I have written humiliating things about my wife and I have thrown many precious people under my bus and bragged about it. I beg your forgiveness and in an attempt to begin to make amends, I am retiring from the ministry, a position I now realize (but have known for years, really) I am not fit to hold.

Brothers and sisters, forgive me.

Please pray for me.

Those left steering the Mars Hill ship have asked for patience while they adjust to life without Mark Driscoll.  Dave Bruskas will be serving as the primary teaching pastor for now until Driscoll's replacement can been found.  At this juncture, one has to wonder whether it is even realistic to seek a replacement…

Finally, we want to point out that Trevin Wax, presumably on behalf of The Gospel Coalition, has chimed in about the Mark Driscoll debacle with a post entitled The Mars Hill Postmortem.  You may remember that Mark Driscoll was one of the founding Council Members of The Gospel Coalition.  In fact, before we launched The Wartburg Watch, we were monitoring what was happening with TGC, and they were so excited that Mark Driscoll would be speaking at their National Conference in April 2009.  My what a difference five and a half years make…

Perhaps the most incredulous statement in Trevin Wax's post was the following:

If anything, evangelicals gifted with discernment and biblical doctrine of sin and grace should have been the first to expose these problems. I know some of this critique happened behind the scenes, inside and outside Mars Hill. But more could have been done sooner to warn and protect the flock.

We have been speaking out against Mark Driscoll's antics since the spring of 2009 (shortly after TWW began).  Not only that, we have been vilified by Driscoll sycophants.  And what have those over at The Gospel Coalition done in that same timeframe?  They have endorsed Driscoll by recommending his books, uploading videos featuring him, and having him speak at their conferences.  And now after Driscoll's resignation, a TGC spokesman says "more could have been done sooner to warn and protect the flock"???

So what are Mark Driscoll's plans for the future?  Perhaps his words — "while my journey, at age 43, is far from over" — provide a clue…

Dee and I predict that in the not too distant future Driscoll will be launching another ministry.  The Mars Hill door may be closed for its co-founder, but we believe Mark is making plans to re-emerge through an open window somewhere, possibly in sunny California.  We'll just have to wait and see…