“In other words, women within this movement are perceived to exist only for the end-goals communicated by the male leaders that perceive themselves as the ‘patriarchs’ of this world,” the lawsuit reads. The conclusion is that a woman who truly believed this—whose boss, mentor, and father figure taught her that total submission was her duty in life—was not able to effectively plot an escape from a sexually coercive relationship.

(discussing a lawsuit filed against Doug Phillips, et al by a former nanny) 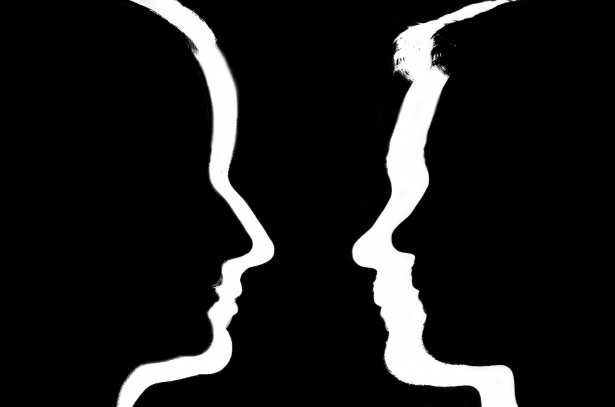 Faces of a Man and Woman

Those who have brought accusations against Bill Gothard have shared their testimonies on the Recovering Grace website, which led to Gothard stepping down from the helm of the ministry he founded over five decades ago – the Institute of Basic Life Principles.  Not surprisingly, 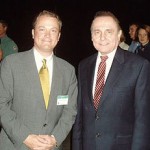 Doug Phillips, who launched Vision Forum in 1998, was influenced by Gothard's teachings, according to Jen's Gems.  Here they are pictured together (Phillips is on the left, Gothard is on the right).

Perhaps not surprisingly, the Duggar family, proponents of patriarchy and the quiverfull movement, has been the poster family of Gothardism and have enjoyed a cozy relationship with Doug Phillips.

According to an article published by the Christian News Wire:

Michelle Duggar, mother to 19 and star of TLC's "19 Kids and Counting" received the "Mother of the Year Award" as part of a special ceremony at the Baby Conference: A Historic Family Summit on the Triumph of Life Over the Culture of Death, held July 8-10 in San Antonio. Michelle and her husband Jim Bob were featured speakers at the event, sponsored by Vision Forum Ministries, which drew more than 1,500 to the Alamo City.

The information in the remainder of this post and at the links is GRAPHIC!

News broke yesterday about a lawsuit just filed against Doug Phillips by his alleged victim.  WND (formerly World Net Daily) published an article with this headline — Christian giant sued for 'using nanny as sex object'.  It begins as follows:

(Warning: This story contains explicit descriptions of alleged sexual conduct described in a lawsuit and may be offensive to some readers.)

The former leader of a popular Christian ministry – who resigned from his position after confessing to an “inappropriate” relationship – is now the subject of a lawsuit that claims he “methodically groomed” and made unwanted sexual contact with a young woman after serving as an authority figure in her life for more than a decade.

Doug Phillips, a husband and father of eight children, had been a popular and controversial figure in the homeschooling movement and a leading advocate of “biblical patriarchy” before his resignation from Vision Forum Ministries and Boerne Christian Assembly, a Baptist church outside San Antonio, Texas, at which he had served as an elder and preached hundreds of sermons.

Phillips was also founder of the San Antonio Independent Christian Film Festival and of the National Center for Family-Integrated Churches.

According to the teachings of the patriarchy movement, also known as the stay-at-home daughters or quiverfull movement, young women remain at home under the protection of their fathers. They’re generally expected not to work outside their home or go to college, and they’re taught to abide by strict gender roles in which men have authority over women.

The news traveled quickly around the internet, and other media outlets are beginning to focus on this important development.  The Daily Beast has picked up the story, as mentioned at the beginning of the post, and it appears the Christian patriarchy movement is in jeopardy.  What follows is an excerpt from The Daily Beast article:

The latest scandal is a doozy. Back in November 2013, Doug Phillips, who, in his capacity as the president of Vision Forum Ministries, is probably the most important leader in the world of Biblical patriarchy, confessed to cheating on his wife and resigned as president of his ministry. “I engaged in a lengthy, inappropriate relationship with a woman,” he wrote. “While we did not ‘know’ each other in a Biblical sense, it was nevertheless inappropriately romantic and affectionate.” Shortly after his confession, Vision Forum Ministries closed up shop, unable to continue with the stink of sex scandal upon them.

It’s hard to underestimate the importance of Phillips in the small world of extreme fundamentalists. His father is one of the most critical founding fathers of the Christian  right movement generally, and Doug extended his work by largely building this culture of the far Christian right as we know it, especially if you watch 19 Kids & Counting. The Duggar family are friends and acolytes of Phillips, and Vision Forum, in turn, has used Michelle Duggar in their efforts to demonize contraception, including giving her an award for “Mother of the Year” for having so many children.

On Tuesday, it was revealed that there may be more to this entire scandal than the typical minister-caught-cheating story. The woman with whom Phillips confessed to an “inappropriate” relationship, named Lourdes Torres-Manteufel, filed suit in Bexar County, Texas, accusing the powerful Christian right leader of pushing her into a multi-year abusive relationship that allegedly featured frequent sexual assault. While the complaint never mentions sexual intercourse, it does claim that he repeatedly groped and masturbated on her while she protested. The plaintiff alleges she was basically moved into Phillips’ house with his wife and children, taken on many family vacations, and given work as a caretaker for the family, all while secretly being bullied into sexual encounters without consent. She even claims that Phillips told her that they would marry soon, as he believed that his wife was about to die.

Torres-Manteufel’s lawyer provided me with a copy of the complaint. It is searing in its criticisms of Doug Phillips. “Phillips’s patriarchal movement teaches that men are, and should be, in the absolute control of women,” reads the complaint, claiming that Torres-Manteufel was therefore bullied into believing she had no choice but to submit to Phillips’ alleged sexual abuse, even though she feared it made her “damaged goods.”

Here is a screen shot of the parties named in the lawsuit:

The complaint is almost 30 pages long and can be accessed here.

It is worth noting that Lourdes Torres was recently married, which her legal name now reflects.

I have an interest in this story because back in the mid to late 1990s, I was homeschooling my daughters.  In May of 1998, I attended the North Carolina Homeschoolers' Conference in Winston-Salem, and Doug Phillips delivered the keynote address.  He was a dynamic speaker who exuberated his love of God, family, and country.  That was the first and last time I ever heard him speak in person.  Later that year, Phillips launched Vision Forum, and we received catalogs every year until my younger daughter was in high school.  I never ordered anything because I thought the merchandise was overpriced.  Perhaps it was providential that my daughters began attending a Christian school the following year because my family would never be influenced by Doug Phillips.

When Dee and I started doing internet research in the summer of 2008, we began coming across Phillips' name when researching patriarchy – a hot button topic we were investigating.  We launched The Wartburg Watch the following March, and four months later I wrote our first post about Doug Phillips, which was entitled Doug Phillips – Homeschooling Guru and QF Proponent.  We have continued to follow Phillips, Vision Forum, etc., since 2009 and have written a number of related posts.

We have not yet had time to digest all of the information in the complaint filed against Doug Phillips; but rest assured, we intend to slog through all that is available and publish additional posts to keep you informed.

It certainly appears that the conservative evangelical view of women will be highlighted if this complaint goes to trial, and it will be interesting to see how this patriarchal interpretation of Scripture is perceived by both Christians and unbelievers.

We leave you with a clip of Doug Phillips which was uploaded to YouTube in 2008 – ten years after I heard him at the homeschooling conference and not long after the alleged sexual conduct (or should we say 'misconduct') began. . .

We are certain that Doug Phillips NEVER imagined the day when he would be the subject of a scandalous story being told literally around the world via the internet.

While reading through comments on a related post over at Spiritual Sounding Board, I came across an incredible remark by our good friend Julie Anne Smith.  She reminded everyone that two years ago Vision Forum celebrated the 100th anniversary of the sinking of the Titanic.  This magnificent ship, which was believed to be unsinkable, struck an iceberg on April 14, 1912, and sunk hours later on April 15, 1912.

Was it 'providential' that the lawsuit was filed on April 15th – the 102nd anniversary of the sinking of the Titanic?

What an interesting twist to this incredulous story…