But if you show favoritism, you sin and are convicted by the law as lawbreakers. James 2:9 NIV 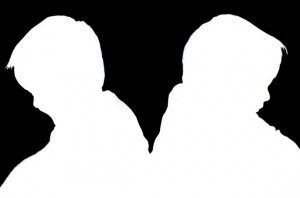 Children in the shadow link

There is a remarkable similarity between the stories of two pastors: Darrell Gilyard and CJ Mahaney that I think is worth exploring. In fact, I think it proves that it doesn't matter if one is Arminian or Reformed: sin affects our choice of friends and our views on authoritarian leadership. It is our hope that those who read this will note patterns of responses in their churches on such issues and be ready to confront them head on.

​Paige Patterson is currently President of Southwestern Baptist Theological Seminary and a former President of the SBC. He appears to hold an Arminian perspective in theology.

Gilyard is a recently released sex offender who is, once again, pastoring a church. In fact the church petitioned the court to allow children to attend his church. Thankfully, a wise judge said something to the effect of "over my dead body." In 2012, our good friend, Tom Rich, FBC Jax Watchdog covered that here. Darrell Gilyard had been recently released from serving three years in a Florida jail for sex offenses.

Gilyard's history of sexual predation goes back to the 1980s. Christa Brown of Stop Baptist Predators provides a revealing look at Gilyard's history with Paige Patterson. From a post titled How Many Does It Take:

How many wounded women and girls does it take before Southern Baptist leaders will take a stand?

In Florida, hundreds of pages of documents detail the sexually explicit text messages allegedly sent by pastor Darrell Gilyard to 14 and 15 year-old girls. A news account provides details of the molestation allegations against Gilyard.

So this is the Florida news, but look at the history of this pastor. Why didn't Baptist leaders stop him sooner?

As reported in the Dallas Morning News, Gilyard left Concord Missionary Baptist Church in Dallas in 1987 after about 25 women complained of his “sexual misconduct.” The senior pastor, Rev. E.K. Bailey, “assumed that would be the end of Darrell Gilyard’s bright evangelistic career.” How tragically wrong he was.

At that time, the First Baptist Church of Dallas and Criswell College president Paige Patterson were promoting Gilyard in Southern Baptist churches. He was considered a rising star. Despite the many allegations against Gilyard, First Baptist officials “decided there was not enough evidence” to further investigate Gilyard, and, according to Rev. Bailey, Paige Patterson wrote him “an unkind letter” saying that “he would have come out to my church and solved the problem for me if I had told him first.”

Apparently, 25 accusations weren’t enough for Paige Patterson. In fact, according to the Dallas Morning News, Patterson painted “Gilyard as a victim” and suggested the accusers were motivated by “jealousy, frustration and racism.”

Learning that Gilyard wanted to attend college and seminary but couldn't afford it, Vines (ed. note-well known pastor Jerry Vines) called on his friend Paige Patterson, at the time president of Criswell College in Dallas, who secured a scholarship for Gilyard. Gilyard didn't finish his degree, but Patterson continued to mentor him, helping him to land preaching gigs at Baptist state conventions and evangelistic rallies across the country.

Gilyard reciprocated by leading his multiracial Victory Baptist Church in Richardson, Texas, one of the fastest-growing in the nation, to join the Southern Baptist Convention in 1990.

The friendship ruptured in 1991, when Gilyard admitted to several adulterous affairs with women he was counseling. Gilyard resigned as pastor of Victory Baptist Church under pressure from SBC leaders. Patterson counseled him to stay out of the ministry for at least two years, but Gilyard ignored the advice and started a new church with about 125 former Victory members two weeks later.

…Gilyard gained national prominence on Jerry Falwell's "Old Time Gospel Hour" with an emotional story of growing up homeless and sleeping under a bridge in Palatka, Fla., in a sermon sold as "The Darrell Gilyard Miracle Story." The story unraveled, however, when the Dallas Morning News reported that Gilyard in fact was raised in a comfortable home by a woman who said she took him in as an infant and raised him as a son.

Gilyard became pastor at Shiloh Metropolitan Baptist Church in Jacksonville at age 31 in 1993. A church Web site credits Gilyard with leading the church to grow from 200 to more than 9,000 members and construct a 5,000-seat sanctuary .

In What Is Truth, TWW reported:

"Dr. Patterson said, "I was unwilling to call anyone guilty until I had demonstrable evidence that these allegations were true.'  Dr. Patterson said that according to Scriptures, action cannot be taken against a minister accused of adultery unless there are two or more witnesses.  He also asked for any other proof, such as photographs, videotapes or laboratory tests."

Christa Brown, writing for Associated Baptist Press, quoted Paige Patterson who wanted us to keep problems inside the church.

Southwestern Baptist Theological Seminary president Paige Patterson preaches that churches should resolve their conflicts internally and should not take them to “the world of unbelief.”

This means, he explains, that when a person has been “offended … misused and abused” within the church, he should take his complaint to church elders and the congregation, and should not go to the courts or talk to the press. In the final prayer of his sermon, Patterson included even “the government” among those to whom church members should not take their troubles.

… According to the Dallas Morning News, many of those claims were reported directly to Paige Patterson — but to no avail. By the time Gilyard was finally convicted on child sex charges in Florida, over 40 young women and underage teens had made allegations against him — and that’s just the ones we know about.

And what about Patterson’s insistence that his anti-outsider stance is somehow biblical? If Patterson needs a biblical basis for doing what’s right, then he should look to the first thing listed by the prophet Micah. “And what does God require of you? To act justly….” (Micah 6:8)

– Darrell Gilyard was FIRST promoted by Jerry Vines, where Vines’ church was told that Gilyard “grew up homeless under a bridge” in nearby Palatka, Florida. This was a lie. Sound familiar?

– Gilyard was heavily promoted by Vines as well as Patterson – Gilyard actually was the preacher for a youth trip at Vines’ church, in which Gilyard tried to seduce one of the young ladies from the church while on the mission trip. Vines knew about this. And ironically, that young woman was the one who later her blog to help gather information for the Jacksonville Sheriff’s Office in the investigation against Gilyard. And incidentally, Robert Hinson subpoened that blog as well as mine in his pseudo-investigation of 2008 that led to my successful First Amendment lawsuit against the city of Jacksonville.

– Even with the knowledge that Gilyard tried to seduce one of his own young church members, and with full knowledge of Gilyard’s sordid past in Texas, Vines after his retirement went to Gilyard’s church as a guest speaker in or around 2007. It was shortly after that when Gilyard was arrested for having sex with one of his underage members.

Let's go through some of the pertinent information from above.

In Mahaney and SGM's case, we are looking at allegations of child sex abuse cover-up.

Once​ again, we are not saying that CJ Mahaney was a predator. The accusations against him, instead, allege that he covered up child sex abuse which occurred within the SGM system.

Here is the question that deeply concerns me. Why is it that the celebrity church leaders seem to give more weight to the testimony of their buddies than the testimony of the alleged victims? Both of these instances are not an example of "He said…She said." Instead they are examples of He said….a lot of She saids." I guess if you are famous and protected, your one testimony trumps all the other testimonies. How gospel like…

My brothers and sisters, believers in our glorious Lord Jesus Christ must not show favoritism. 2 Suppose a man comes into your meeting wearing a gold ring and fine clothes, and a poor man in filthy old clothes also comes in.3 If you show special attention to the man wearing fine clothes and say, “Here’s a good seat for you,” but say to the poor man, “You stand there” or “Sit on the floor by my feet,” 4 have you not discriminated among yourselves and become judges with evil thoughts? 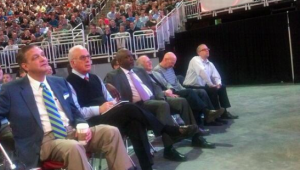 Question: Where are the children and families who have been hurt? Guess we know whose voice matters at T4G.