Long term domestic violence: Being abused in this manner is like being kidnapped and tortured for ransom but you will never have enough to pay off the kidnapper. by Rebecca J. Burns link 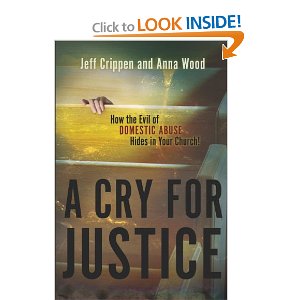 Violence. As Christians we often speak out against the senseless violence we see in our society. The massacres at a movie theater or school, late term abortions, and street crime all rivet our attention. Some of us put our hope in the church, thinking that going to a Christian church will put an end to senseless violence. Well, at least I used to believe this to be true. (*Face palm* for previous stupidity on my part).

Yet, in the Bible, we have the very real example of David, a man after God's own heart, killing the husband of his lover. So why do we think we are exempt from acts of violence?

As Christians, we are positionally holy; yet we are functionally still sinners. However, it seems we try to overlook this fact. Instead we point to the sins of those outside the church, preferring to turn a blind eye to the violence that occurs inside the rarefied atmosphere of the supposedly sanctified basilica. In fact, it is this continued violence that causes me to realize how much we need the grace of our Lord because we are not doing a good job in eradicating this sin from out midst. Domestic violence and child sex abuse remain a blot on the body of Christ.

If we truly believe that we are sinners, in need of daily grace and forgiveness, why are we so quick to hide our sins? Shouldn't we be the first to admit our fallen nature and our need for a Savior to our watching world? Instead, we cover and conceal our sins and vigorously point out the sins of the culture around us. They see through us every time, folks. We are only fooling ourselves.

Just as TWW believes that child sex abuse has been ignored and mishandled by many churches, we know that domestic violence counseling is equally neglected and botched in today's church. We will be writing on the subject of domestic violence and the church over the next week or so. We will focus on an excellent (super recommended) book by Jeff Crippen  and Anna Wood:

Victims of abuse are often discounted by their churches. When they gain courage to seek help, they are routinely given superficial advice. accused of not being good wives or children, told they are surely exaggerating the case, and then sent home to "do better" and suffer even more at the hands of their tormentor. And when the finally leave their abuser, either by separation or divorce, most often the victim is the one who must leave their church while the abuser remains.

The church, in other words, is enabling the wicked person.

Today, there were two major news items that dealt with domestic violence. Both of them present the complexities of dealing with violence and its effects. I have added two other stories to round out the discussion. It is our intent to show that domestic violence is prevalent in society and in all kinds of churches. The sad reality of this discussion is that churches do no better than the culture at large. Yet the church is sure loud when it comes to condemning society on their supposed rejection of "traditional" values. I guess that means that domestic violence is considered a "traditional" value in some churches.

Secular (as far as we know)

Nigella Lawson appears to be choked by husband in public link.

You can see the picture of what appears to be her husband choking her at the above link. Pay particular attention to the response by the husband in this account.

British police are investigating newspaper photos that show art collector Charles Saatchi with his hands around the throat of his wife, celebrity chef Nigella Lawson.

The pictures drew widespread condemnation after they were published by the Sunday People tabloid. The paper said the images were taken during an argument at a London restaurant on June 9.

The London police force said Monday it had not received a criminal complaint about the incident, and "inquiries are in hand to establish the facts" in order to assess whether a formal investigation is warranted.

In Britain a complaint from the victim is not necessary to lay assault charges if there is enough evidence from witnesses.

…her estranged husband who had threatened her showed up at her school, causing a lockdown.

The diocese will not renew her contract, in that school, or others in their district. Her children were banned from attending the school as well.

Here is the letter that she received from the diocese link.

We know from the most recent incident involving you and Mrs. Wright (the principal) while you were still physically at Holy Trinity School, that the temporary restraining order in effect were not a deterrent to him. Although we understand he is current incarcerated, we have no way of knowing how long or short a time he will actually serve and we understand from court files that he may be released as early as next fall. In the interest of the safety of the students, faculty and parents at Holy Trinity School, we simply cannot allow you to return to work there, or, unfortunately, at any other school in the Diocese

The Southern Baptist Outpost has an article with an excerpt from audio recordings and transcripts from a conference in 2000, in which Paige Patterson explains the counsel he gave one battered woman. Here’s the quote the Outpost posted:

Can anyone give a reason for why this is considered "biblical" advice?

This is a true story with names and location changed to protect the victims. This is about a large, Reformed Southern Baptist church. The leadership did not allow contact numbers for the local domestic abuse hotline to be posted in the church. We bet our readers are thinking that the pastors wanted to be consulted to give "biblical" support instead. If you did, you would be correct. Let's take a look at the "Scripturally correct" support that they did offer.

One of the gazillion pastors at this church was abusing his wife and, according to some reports, his young children. While the pastor was at work, the wife's family came to her home and got her to leave with the children. The family then called the lead pastor and requested his assistance in dealing with the abuse. He refused, saying that she would have to move back into the home in order for this to be handled in a "biblical" fashion. Thankfully, the family refused and instituted divorce proceedings. But the abused wife is the one being blamed by the church for the break-up of the marriage.

We will discuss these questions, and more, in subsequent posts. We will also continue to review A Cry for Justice. We look forward to hearing our readers' thoughts on these examples.