"Why a new student missions conference? … With 7,000 schools of higher learning, and 15,000,000 students, and a spread of 5,000 miles (from Maine to Hawaii), there is room in America for another conference about the most important issue in the world." 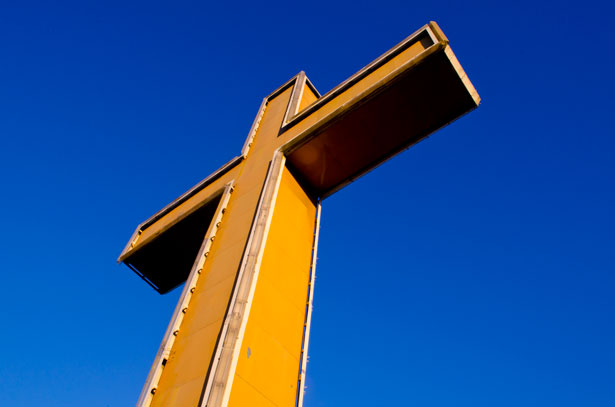 Park Of The Cross

If you're a college student who has been captivated by Young, Restless and Reformed movement, have we got the conference for you!  It's called the Cross Conference, and it is slated to take place December 27-30, 2013 in Louisville.

Last week Desiring God and The Gospel Coalition simultaneously announced the conference, and Kevin DeYoung quickly followed with his announcement – Come to Cross.  DeYoung explains that for several years some leaders have been 'dreaming and praying' about a student missions conference based on the doctrines of grace and focused on lost people groups around the world.  He then shares the following about the conference:

"Cross exists for the global purpose of magnifying the kingly majesty of Jesus Christ. Our focus is on all the unreached peoples of the world where Jesus is not worshipped as God and Savior.

To that end CROSS aims to mobilize students for the most dangerous and loving cause in the universe: rescuing people from eternal suffering and bringing them into the everlasting joy of friendship with Jesus.

Jesus said that every person without faith in him, remains under the wrath of God (John 3:36). He also said that God did not send him “to condemn the world, but that the world might be saved through him” (John 3:17).

That saving faith is born through the message of Jesus’ blood and righteousness—his cross. Everyone who believes is saved. But nobody believes without a messenger.

World missions is the glorious gospel enterprise of going like Christ into another cultural world to rescue people from eternal suffering, and renovate their broken lives, that they might render to God the splendor of his majesty through faith in Christ.

There is no better reason to lose your life and no greater way to live it."

The Cross website is up and running and features details about and the conference and its organizers.  We were especially interested in the Cross Leadership Team, which includes:  Thabiti Anyabwile, Kevin DeYoung, John Piper, David Platt, Zane Pratt, David Sitton, and Mack Stiles.  As many of our readers know, the first four are widely recognized, so we have provided links to their biographical information.  Because we were not as familiar with the last three, we decided to do a little digging…

Here is some information that might shed some light on why they were chosen for the leadership team.

According to the 1979 Chanticleer (Duke University's yearbook), Pratt earned his undergraduate degree that year.  He graduated two years ahead of me (Deb) and three years ahead of Mark Dever, although I never met either Pratt or Dever during my four years at Duke.   A Towers article published June 15, 2011, states:

"At both Duke and Gordon-Conwell, Pratt was a fellow student with Mark Dever, senior pastor of Capitol Hill Baptist Church in Washington, D.C."

Well, Pratt and Dever were fellow college students for one year, and it appears that Pratt worked at Duke after graduating.  In that Towers article, Mohler reveals his long-term friendship with Pratt this way:

“I’ve known Zane Pratt for more than 30 years. Few people have been more used of God in my life – and I know in the lives of so many others."

One factoid that surprised us about Zane Pratt and Mark Dever was revealed by Tom Schreiner, who wrote this last year:

"Pratt has been at SBTS for just a year, and he’s already one of the most popular professors due to his intellect, kindness, and incredible wealth of missions experience. Seriously–this guy is a gospel Navy SEAL (and won Mark Dever over to Calvinism while the two were at Duke)."

Now I remember hearing C.J. Mahaney interview Mark Dever for 9Marks back in 2007, and if I remember correctly, Dever admitted that he was an agnostic in his formative years.  Unfortunately, that audio has since been removed.  However, we can confirm Dever's agnosticism because he wrote this back in 2010:

"Reading Kell's book also made me thankful, in God's strange providence, for my time as an agnostic…"

It certainly sounds like Dever embraced Calvinism while he was in college, and now we know who influenced him.

Zane Pratt became dean of the Billy Graham School of Missions and Evangelism in 2011, and for the two decades prior he served overseas as a missionary.   Because of this background and his relationship with Mohler and Dever, he was likely selected for the Cross Leadership Team.

He is the author of Reckless Abandon and founder of To Every Tribe (located in Los Fresnos, Texas).  You can read his testimony here.  Sitton, a former church planter in New Guinea, was invited by John Piper to speak at the 2006 Desiring God Pastors Conference.  He returned in 2011 to speak at the Desiring God National Conference.  Here is a clip from Piper's interview of Sitton in 2011.

Among the To Every Tribe Board of Directors are Scott Anderson, Executive Director of Desiring God, and Gregg Harris (whose endorsement is also included on the website).

You might also want to take a look at To Every Tribe's Vision and Mission, which indicates that they are reformed and baptistic.

He lives in Dubai, United Arab Emirates, according to his Facebook account and is CEO for Gulf Digital Connections.  Stiles spoke at the 2012 Together for the Gospel conference and gave a talk called The Church, the Gospel and Our Call to the Nations.

He has been in Dubai for over a decade and became an elder of United Christian Church of Dubai – a 9Marks affiliated church.  He and the other church leaders hired the current pastor, John Folmar, and then that church planted Redeemer Church of Dubai where Stiles currently serves as an elder.  According to his bio, Stiles "served with InterVarsity in the US for over 20 years in various management roles" and has written several Christian books. Stiles' writings are sometimes featured on the 9Marks website.   An interesting tidbit he revealed in his T4G talk is that his son lived with Mark and Connie Dever while he was in college.

Plenary speakers at the first Cross Conference include a who's who of Calvinistas (not to be confused with 'traditional Calvinists'):

There are breakout speakers as well including: Kristie Anyabwile, Andy Davis, Mark Dever, Ligon Duncan, John Folmar, Greg Gilbert, Al Mohler, Zane Pratt, David Sitton, and others.  Oh, and how could we forget – C.J. Mahaney.  Look, don't sweat it about Mahaney and the class action lawsuit.  By all appearances, the Cross crowd isn't the least bit concerned…

As we hopefully have demonstrated, those involved in this student missions conference are "together for the Calvinista gospel".  No one outside of their camp is participating as far as we can determine.

Are we concerned?  You betcha!

When a member of the leadership team (Sitton) indicates they need to train 'the right kind of missionaries', and when a Southern Seminary professor (Schreiner) brags that Zane Pratt 'won Dever over to Calvinism', you can be sure that this crowd is advocating an extremely narrow approach to missions.

As parents, we would want to know this information before sending our children to this conference.  Check out this suggestive Tweet sent out earlier today:

Looking for a good Christmas gift? Come to #CrossCon2013 http://crosscon.com/register/

And that was the motivating factor for writing this post.  As our readers know, we believe in full disclosure…

Once again, we must emphasize that we are not attacking reformed theology per se or condemning traditional Calvinists who have a live and let live approach to theological differences.  Unfortunately, we don't believe the same can be said of the individuals involved in planning this conference.  It's their way or the highway…

Here is a perfect illustration of the superiority often demonstrated by those whom we label 'Calvinistas'.  Not long ago, R.C. Sproul, Jr. responded to a question on his website (see below).

Ask RC: Do Arminians go to heaven when they die?

"From one perspective, to even ask this question seems almost ghastly. From another perspective, asking this question seems like surrender. On the one hand, no one believes in justification by having all my theological ducks in a row. On the other hand, many of our fathers saw the divide between Arminian theology and Calvinistic theology as a decisive one. We want to honor our brothers if they are our brothers, and we want to honor our fathers, if they are right on this issue. Better still, we want to be true to the gospel of Jesus Christ.

My own earthly father has been known to answer this question this way- Arminians are Christians, barely."

To be clear, R.C. Sproul, Jr. is not involved in this conference, but his father has been known to share the platform with those who are "Together for the Gospel".

We are left wondering whether those involved in the Cross conference are more interested in coaxing attendees and unreached people groups to embrace Calvinism rather than Christianity in general.  They appear to marginalize anyone who does not believe their particular brand of theology.

We find it rather odd that the Calvinistas focus on college students and young adults but don't seem all that concerned about those in their thirties and beyond.

We are left wondering what will happen to the Young, Restless, and Reformed movement a decade from now.  Statistics appear to indicate that the 'Nones' – those who leave the church while maintaining their Christian faith – are on the rise, perhaps not so coincidentally as the YRR crowd has risen to power over the last decade.  Are the Neo-Cals driving Christians out of church?

On the surface, the New Reformed movement may have some appeal, but underneath there are some serious problems which we often address in this forum.  What will the future hold for the Calvinistas?  Only God knows…