"We are proud of our church for many reasons.  One of the biggest is what we call A.R.M.;  Annually Renewable Memberships.  Every year we wipe clean our membership rolls and provide our entire church family with a great opportunity to renew their memberships for another year." 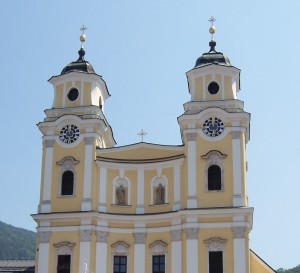 Collegiate Church at Mondsee, site of the wedding in The Sound of Music

Several weeks ago I was listening to a program on Christian radio, and the topic being discussed was Renewable Church Membership (RCM).  A pastor in our area – Scott Lehr of Southbridge Fellowship –  was interviewed, and his church began this newfangled type of membership last May.  What follows is a description of RCM:

"Renewable Church Membership (RCM) is an opportunity for every covenanted member to personally filter their lives through the vision and values they committed to by becoming part of Southbridge Fellowship.  The RCM survey informs the member of God’s grace in their life, gives opportunity for clarity in seeing where there is room for growth, and informs the eldership and leadership of Southbridge in which areas the member would like to see personal growth in coming year.  RCM is also a way to know who is still here and striving with us, and who is not."

As our loyal readers know, Dee and I do our best to write about Christian trends.  it will be interesting to see whether Renewable Church Membership catches on and is implemented by other churches.

Renewable Church Membership (RCM) causes me to raise a number of questions, such as:

– Is this approach going to be beneficial or detrimental to the 'health' of any given church long term?

– Do churches with RCM issue letters of transfer for members who fail to renew their membership?

– What happens if a member is incapacitated and unable to fill out the survey required to renew membership?

– Will there be an initiation fee or renewal fee for church members?

– Will RCM weed out those who have limited resources (financial or otherwise)?

– Will members be graded on what they have done throughout the year on behalf of the church?

– Will there be any age restrictions on those who join the church?

– Will those who are away for long periods of time (college students, those in the military, etc.) be able to renew their membership if they cannot make much effort to fulfill the church's mission?

– What are churches trying to accomplish by implementing Renewable Church Membership?

These are just some of the questions I have.  What comments and concerns do our TWW readers have?