"So every spin of the roulette wheel … you know Las Vegas … every roll of the dice in your family board game, every reaching of the hand for the scramble of the letter, is determined by God." 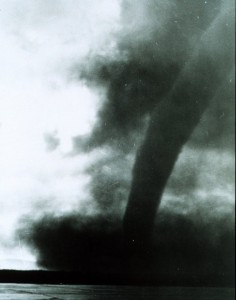 I am bracing myself in the wake of Hurricane Isaac… Why?  Because I am concerned about how John Piper might interpret this devastating weather event.  After all, in recent years Piper has attributed a bridge collapse and tornadoes to the mighty hand of God.  What will John Piper say about a hurricane that hit New Orleans seven years to the day of Hurricane Katrina? Seven is a significant 'Biblical' number…

If you don't remember the I-35 West bridge collapse that occurred five years ago, here is raw footage captured by the Corp of Engineers.  Sadly, in 1990 a warning was issued that such a catastrophe could possibly occur.  Take a look.

How did John Piper react to this calamity that happened in the area where he lives?  He wrote a blog post he called Putting My Daughter to Bed Two Hours After the Bridge Collapsed.

Talitha (11 years old) and Noel and I prayed earnestly for the families affected by the calamity and for the others in our city. Talitha prayed “Please don’t let anyone blame God for this but give thanks that they were saved.” When I sat on her bed and tucked her in and blessed her and sang over her a few minutes ago, I said, “You know, Talitha, that was a good prayer, because when people ‘blame’ God for something, they are angry with him, and they are saying that he has done something wrong. That’s what “blame” means: accuse somebody of wrongdoing. But you and I know that God did not do anything wrong. God always does what is wise. And you and I know that God could have held up that bridge with one hand.” Talitha said, “With his pinky.” “Yes,” I said, “with his pinky. Which means that God had a purpose for not holding up that bridge, knowing all that would happen, and he is infinitely wise in all that he wills.”

Talitha said, “Maybe he let it fall because he wanted all the people of Minneapolis to fear him.” “Yes, Talitha,” I said, “I am sure that is one of the reasons God let the bridge fall.”

John Piper signs off with these icy words:  "Weeping with those who weep, and those who should.  Pastor John"

Is this kind of approach toward the lost what Piper calls being 'missional'?  I call it cruel.  Is he trying to outdo Jonathan Edwards' "Sinners in the Hands of an Angry God" or what?  He was roundly criticized for his remarks about the bridge collapse, which must have led to him giving this explanation.  ( BTW, I'm not buying it!)

Three years ago a tornado hit Minneapolis. (Am I detecting a pattern here?)  John Piper explained what happened in a post he called The Tornado, the Lutherans, and Homosexuality.  Please take the time to read it.  Piper explains:

"On a day when no severe weather was predicted or expected…a tornado forms, baffling the weather experts—most saying they’ve never seen anything like it. It happens right in the city. The city: Minneapolis… The tornado happens on a Wednesday…during the Evangelical Lutheran Church of America's national convention in the Minneapolis Convention Center…

Conclusion: The tornado in Minneapolis was a gentle but firm warning to the ELCA and all of us: Turn from the approval of sin. Turn from the promotion of behaviors that lead to destruction. Reaffirm the great Lutheran heritage of allegiance to the truth and authority of Scripture. Turn back from distorting the grace of God into sensuality. Rejoice in the pardon of the cross of Christ and its power to transform left and right wing sinners."

Finally, earlier this year Piper chimed in about the 90 tornadoes that devastated 12 states in a post entitled:  Fierce Tornadoes and the Fingers of God.  Piper concluded with these words:

"Therefore, God’s will for America under his mighty hand, is that every Christian, every Jew, every Muslim, every person of every religion or non-religion, turn from sin and come to Jesus Christ for forgiveness and eternal life. Jesus rules the wind. The tornadoes were his.

But before Jesus took any life in rural America, he gave his own on the rugged cross. Come to me, he says, to America — to the devastated and to the smugly self-sufficient. Come to me, and I will give you hope and help now, and in the resurrection, more than you have ever lost."

And this is supposed to minister to those who have lost ALL their earthly possessions and perhaps even loved ones because of a catastrophe?  The more I learn about John Piper, the more I empathize with Eagle's faith struggles.  There was a time when he believed John Piper.

That thought-provoking article begins with these words:

"Does God merely watch a sin taking place in the world and then "use" that for good, or are even the worst of sins predestined and designed by Him? In a weekend seminar, preacher John Piper dealt with the complex issue of God's providence.

Piper spoke about God's sovereignty during the Saturday morning session of the seminar titled "The Pleasures of God," organized by the Desiring God ministry and held at Bethlehem Baptist Church in Minneapolis, Minn., where he has served as pastor for over three decades.

The 66-year-old preacher underlined that God has total control over everything, quoting verses from the Bible."

I wholeheartedly disagree with John Piper's contention that God causes calamities.  Forty years ago I was in a horrific car accident.  I was 12 (almost 13), and the vehicle in which I was riding was struck head-on by a drunk driver.  Both vehicles were traveling at approximately 60 mph.  The parents of my friend were thrown through the windshield of their GMC pick-up and killed instantly.  She and I were pinned in the wreckage, and it took two and a half hours for them to cut us out.  My friend grew up without her parents.  I do not hold God responsible for this tragedy.  To believe that He either caused it or could have prevented it (and chose not to) is unfathomable for me.  I have been pondering this life-altering event for four decades, and I do not hold Almighty God responsible for what happened.  I believe it was the result of our sinful state.    A foolish woman made a choice to drink and drive, and she alone was responsible for the deaths of two wonderful Christians, the horrible injuries sustained by my friend and me, and her own injuries (two broken legs).  She was tried for two counts of manslaughter and served a prison term.

Two years after that devastating accident, John Piper's mother was killed in a bus accident in Israel.  The year was 1974.  It appears that tragedy has had a profound impact on him and perhaps he has had to justify in his mind that his mom was taken away because it was God's sovereignty.  Sorry, I don't buy it.  I believe God has foreknowledge, but I do not believe He caused / allowed that bus accident that took the life of Piper's mom.

I will conclude by affirming that I wholeheartedly believe in God's sovereignty. I have experienced divine providence time and time again, but to claim that God's sovereignty is what causes calamities is unacceptable to me (8/31/12 – I have removed the word "allowed" because a sovereign God 'permits' catastrophes).

I believe that kind of thinking is extremely detrimental to the spread of the 'gospel' (the true Gospel).  What do you think?  Does God send / control tornadoes, hurricanes, and other devastating circumstances?