Anyone who doesn't take truth seriously in small matters cannot be trusted in large ones either.   Albert Einstein 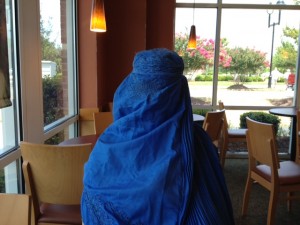 Guess who is in a Duke Blue burka? Special thanks to Eagle

For 3 years, TWW has been pushing back against a dangerous teaching that seems to be getting more play in the Calvinista crowd. They teach that women are gullible and easily deceived and that is one of the reasons that they should not be in leadership. This teaching is cropping up all over the place. It is seen in some of the Calvinista circles and in a number of the Family Integrated Churches.

Mark Driscoll  from our post Mark Driscoll: Narcissistic Cowboy of Knight Errant link had this to say:

“Without blushing, Paul is simply stating that when it comes to leading in the church, women are unfit because they are more gullible and easier to deceive than men. Before you get all emotional like a woman in hearing this, please consider the content of the women’s magazines at your local grocery store that encourages liberated women in our day to watch porno with their boyfriends, master oral sex for men who have no intention of marrying them, pay for their own dates in the name of equality, spend an average of three-fourths of their childbearing years having sex but trying not to get pregnant, and abort 1/3 of all babies – and ask yourself if it doesn’t look like the Serpent is still trolling the garden and that the daughters of Eve aren’t gullible in pronouncing progress, liberation, and equality.”

Please note that he has nothing to say about the men who buy into the same philosophy as the women's magazines. Need I say Playboy, Esquire or the Sports Illustrated Swimsuit Issue?  Women are deceived and gullible but these men are not?  What is Mark hiding here? I wonder…

In our recent posts on the pedophile abuse at a Household of Faith church, we were told that Gregg Harris refused to listen to an important psychosexual report on a pedophile offender because it was a woman who viewed it and "women are easily deceived." His spokesperson denied the report but we heard from the woman involved.  That response delayed pertinent knowledge getting out to the congregation who were still under the misunderstanding that all the pedophile did was "sneak a kiss." Here is what she had to say.

This meeting DID occur and Gregg Harris DID indeed say such a thing. My husband was the recipient of his admonition. At the meeting, which my husband attended with my oldest teenage son, it became apparent that Gregg had been brought in to squash any rebellious, divisive behavior, not seek the truth. (At this point, most of the church erroneously believed the elder perpetrated deception that it was "just a kiss" and couldn't understand all the fuss. We also DID NOT KNOW that the elders knew the full extent of the abuse case- if they did they wouldn't be defending Eddie and Patrick RIGHT?! ) My husband spoke up and said that it was important that the contents of the psycho-sexual evaluation be read by the Elders, that there were much bigger issues to consider. Gregg Harris asked if he had read it, to which my husband replied, "No but my wife has and we are very concerned about the contents." GH responded that I was gossiping and he shouldn't trust my account because women are easily deceived- "look what Eve did to Adam."  CRICKETS….. and then ONE YOUNG MAN stood and faced GH and said that he believed that I had been created to be my husbands help-meet and that I was trustworthy.  CRICKETS….

In a room full of HEADS of HOUSEHOLDS, many who had known me as a sister in Christ for YEARS, only one young man (in addition to my husband and son) dared to defend my integrity and speak against GH. If indeed  our church didn't hold to the 'women easily deceived doctrine' then why were our elders silent?  Why did all of those men sit there quietly maligning the integrity of their own wives by proxy? WHY were Gregg and our elders so set on ignoring and covering up the the truth?  Why was it so important to protect the perpetrator and villanize the victim and anyone who defended her?

Five years later the questions remain. But that was the last straw for my husband. He LITERALLY took off his shoes and banged them together (Matt 10:14) and we never returned. In 22 years of marriage I have not heard my husband swear before or since that day- but he did. We had tried tirelessly to speak truth into that situation for months to no avail. We still live in the midst of the small community and the cover-up continues."

From where does this damaging teaching arise? The first "proof" is from the story in Genesis 3: 1-6.  Eve is in the Garden and she is deceived by Satan. Then in 1 Timothy 2:14, Paul harks back to that incident and says: "For Adam was formed first, then Eve. And Adam was not the one deceived; it was the woman who was deceived and became a sinner."

Many of my pastors have vigorously warned about making a big, fat doctrine based on a stray verse. And that is what I believe is happening here. This is an alternative explanation by another blogger link.

"If these churches truly believe that the reason why women should not teach men is because women are more easily deceived, logic would suggest that women should not be trusted to teach vulnerable children and other, supposedly gullible, women.  Yet many women are trusted and even encouraged to teach children and other women, but remain barred from teaching grown men in church services.  This simply doesn’t make sense.  Surely Paul was suggesting something other than the idea of “female deception” when he brought Adam and Eve into his first letter to Timothy in verses 13-14."

"I believe that Paul mentioned Adam and Eve to correct a false teaching that was circulating in the Ephesian church which claimed that Eve was created first and Adam was the one deceived.  There are several gnostic texts which state this false, topsy-turvy thinking.  (Early church fathers, Irenaeus and Tertullian, quoted from 1 Timothy and identified the heresy in Ephesus as a form of gnosticism.)  Furthermore, in 1 Timothy 2:12, the word “to teach” is tied to the word “to domineer”.  This is a very important consideration.  Paul was not writing about sound teaching in his prohibition.  Moreover, Paul’s instructions were written in response to a particular problem in a particular congregation."

Back to the subject at hand. I want to prove the fallacy that women are the only ones who are gullible and easily deceived. This following list is not meant to be a screed against men. It merely is meant to show that men and women are in the same boat.

The faith, both within the Scripture and without, is filled with examples of men who have been deceived and, in return, have deceived many others. The Bible is replete with warnings about not being deceived. Why are those warnings not gender specific if it is women who are easily deceived? I contend that today's churches, by excluding women from leadership, may be rejecting the very voice of the Holy Spirit as He speaks through the lives of His beloved women. Such churches are opening themselves up to deception and danger.

Narcissistic church leaders are able to sideline over 50% of the adult population in their churches with this ridiculous assertion. For any pastor who is into hypercontrol, this is manna from heaven. Women are to shut up, never question the leaders, obey their husbands (even if he is bum) and know their place. Imagine the freedom of not having to listen to over half of your congregation?!!

Is the church missing out on valuable input from women? New statistics may indicate that the increase of feminism in the secular world may be resulting in the decline in child sexual abuse. In an article " Does the Rise of Feminism Explain Decline of Child Sex Abuse?" link .

"The rates of child sexual abuse in the United States, while still significant and troubling, have been decreasing steadily over the last two decades by several critical measures."

"At the same time, the willingness of children to report sexual abuse has increased. In a 2008 survey, Dr. Finkelhor, director of the Crimes Against Children Research Center at the University of New Hampshire, found that in 50 percent of sexual abuse cases, the child’s victimization had been reported to an authority, compared with 25 percent in 1992."

"Indeed, Grits suspects a major cultural shift unmentioned by the Times may account for much of the decline: The rise of the women's rights movement in the 1970s and the resulting transformation of American family life. While cases like Sandusky and Lynn get most of the headlines, in reality the overwhelming majority of child-sex abuse occurs in the home, which to me indicates it's being stopped in the home."

"Whereas women once had to climb a mountain of societal disapproval to stop an abusing husband, today she can throw the bum out with both personal and official support. Being able to leave the jerk who threatens your kids rather than feeling obligated to co-habitate could have a big preventive effect, eliminating opportunities for abuse on the front end. "

"Though this hypothesis is pure speculation, perhaps a major difference stems from women embracing and living out their hard-won equality, not just in the workforce but in the home.So first-time mothers in the 21st century arguably enter that phase of their life with more maturity and self-confidence that better enables them to defend themselves and their progeny."

I wonder. If Steve Gaines had women in leadership, would the pedophile situation have been handled differently? The same goes for my former church and for the Household of Faith and many, many other denominations and families of churches. Could churches be dangerous places for children precisely because the women are not privy to the discussion of those in authority?

Can you imagine all the things that women could know that do not need to be "received because they are deceived?" Pedophilies, domestic abuse, financial improprieties, affairs,  bad theology, etc are all able to be ignored because, well, you know, those women are soooo gullible. What a racket.

Another important point: I do not buy " the elders "consult" their wives" explanation. I have met many elders' wives who will not speak up because they are "submissive." But, even more importantly, single women have the Holy Spirit well. They have as much to say but are often marginalized by male church authority. I want the church to hear from our singles because they, too, have the Holy Spirit.

This leads to my radical suggestion to our readers. Get out of any church that sidelines women. Such an institution is paralyzing the Holy Spirit and that can, and has proven to be, perilous.