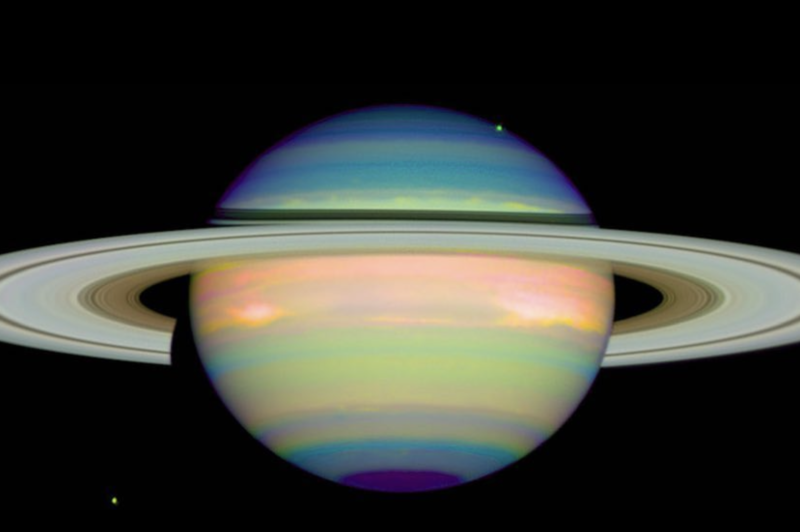 In 1998, Hubble captured this colorful view of Saturn in infrared light. NASA/Hubble

“There must always be some who are brighter and some who are stupider. The latter make up for it by being better workers.” Bertolt Brecht

Ghislaine Maxwell was just found guilty on 5 out of 6 charges.

This situation reminds me of the following saying from Run Forest Run.

I make it a point not to discuss politics on this blog. However, the following situation was so well known and the excuse so utterly ineffective that I wondered why anyone with half a brain would try a similar tactic. Please don’t descend into political commentary in the commentary. The question is “How did Perry Stone miss this debacle, spewed all over media?”  If he saw it, why did he channel this particularly well-known incident?

The former governor of New York had to step down after harassing women, implying his Italian heritage “Made me do it.” It was all a misunderstanding.

Note, in particular, the points I’m trying to make.

If critics thought New York Gov. Andrew Cuomo would relent in the face of 11 women accusing him of disgusting acts of sexual harassment, they do not know Andrew Cuomo. The man who once said “I am not a superhero” is now denying that he is actually a super villain who groped and harassed young women, including a current staff member.

…Cuomo spent much of his statement arguing that he is often misunderstood about his kissing, hugging and touching. As he spoke, pictures showed him kissingeveryone short of “a cop down on Thirty-Fourth and Vine.” The culprit, it would seem, is not “Love Potion No. 9” but his Italian heritage. Cuomo insisted that his mother taught him to hug and kiss everything short of lampposts.

Televangelist Perry Stone claims he isn’t perfect and his Italian heritage is to blame for his actions.

Who is Perry Stone?

Perry Stone, an ordained Bishop with the Church of God (Cleveland, Tennessee),1 which is a charismatic Pentecostal denomination that affirms essentials doctrines such as the inspiration of the Bible, the Trinity, and salvation through Christ;2 however, much of what he propagates through his ministry is controversial and, at points, heretical.

You can find his own, lengthy bio on his website here.

Yet, in the same way other Pentecostal stereotypes don’t apply to Stone, the uneducated, “backwoods” image doesn’t stick to him either. “I don’t say this boasting, by any means, but I have about 60,000 hours of Bible study and over 20,000 books in my library,” he says. “I study every possible theological theory to ensure that what I believe can be proven; that I can prove what I’m teaching people. I’m not the kind of person who only studies what I believe to enforce what I believe. If you’re going to defend your faith, you have to know what others believe.”

He supposedly has an accountability board that appears to include his own son.

Why is Perry Stone in trouble?

…“Information can be twisted by the god of this world so easily. So when you’re dealing with a Christian system who wants to be honest … secular individuals, it has been proven, they will give a false scenario and then you know, two, three years down the road come back and apologize for it and I don’t want to go into collusions and all that,” he said.

Apparently, the FBI may now be investigating him. The FBI cannot confirm or deny ongoing investigations but local folks claimed they have spoken with the agency. According to the Chattanooga Times Fee Press which wrote: Women in Perry Stone’s ministry allege sexual misconduct, say FBI is investigating televangelist

Last month, the Federal Bureau of Investigation began questioning people connected to Stone and his Cleveland-based ministries, according to five people with direct knowledge of the interactions.

At least seven people connected to the ministry, including some couples, have shared information that investigators sought about sexual misconduct allegations against Stone as well as the evangelist’s connections to Bradley County law enforcement, according to the five people.

…Meanwhile, more than a dozen people connected or formerly connected to Stone’s ministry told the Times Free Press they are becoming more concerned about the perceived lack of accountability for the internationally known spiritual leader a year and a half after allegations of inappropriate conduct involving women were first made public.

Some are angry at the board of directors at Voice of Evangelism, believing the ministry did not involve law enforcement or fully investigate claims of misconduct against Stone by women in his ministry, which included groping, unwanted kissing and showing women he was aroused.

Apparently, the ministry claims they sent out a voice file which they said were words from the Holy Spirit!

Days ago, we sent a voice file of the words spoken by the Holy Spirit that was spoken recently, to be translated (not interpreted), to several Arab friends, as there [were] three different dialects. All three sent back the same message from what they could understand. One part was a warning for me personally, from the Lord, exposing some people who were plotting and making war against me and the ministry,” Stone said, in part.

Dee, at this point, is banging her head on the table. It is sure nice that the Holy Spirit seems to it his way. In my particular walk, the Holy Spirit tends to slap me upside the head more than pat me on the head.

Didn’t Mark Driscoll’s wife give him a similar warning which eventually led them to hightail it out of Seattle?

Forgive me, I’m Italian and he’s “not perfect.” Didn’t I just say this above.

So, it appears that Stone felt it to his advantage to use the Cuomo defense. Does Stone know how that turned out for the FORMER governor? According to the Christian Post as linked above:

Stone later explained that the allegations against him were misinterpreted social behavior that is seen as normal in Italian culture.

“I am not a perfect man,” he said. “People have taken me hugging and kissing them on the cheek wrong. I quit that. I’m Italian. My whole family holds hands, rubs backs. I didn’t know you can look at somebody and say, ‘Hey, how you doing?’ and they can take it wrong.”

It’s deja vu all over again.

You see, it appears he did some similar before and had to step down but he’s back.

According to Ministry Watch in More Allegations Surface Against Televangelist Perry Stone:

His Cleveland, Tennessee-based ministry, Voice of Evangelism, announced in July that he had taken a leave of absence after admitting that he had acted inappropriately with female employees.

“I confess at times I’ve been inappropriate in all this weariness of just non-stop ministry,” Stone said in the message. “I let my guard down and I’ve asked, of course, God to forgive me for that. I sat down with my family, with my beautiful, precious wife Pam, the love of my life. I asked her to forgive me. And I very humbly and very sincerely ask those who have been hurt or offended by my actions to, please, also forgive me for those things.”

But a few months later, Stone was back in the pulpit.

A woman jumped up in a service and called him a “nasty perv.”

Stone said he was going to have her arrested. Here it is, straight from the Chattanooga Times Free Press, for your listening pleasure. If she is reading this, please contact me; dee@thewartburgwatch.com. I would looooove to speak with her.

And there is more. Does that surprise you?

The first thing I thought of when hearing about this is “Bet there is money involved.” I was pleased to see that Ministry Watch (Waren Cole Smith) went down that road.

According to Ministry Watch, the alleged FBI investigation is about more than Stone touching women as some groups seek to distance themselves from the ministry.

This disruption is not the only consequence of the increasingly public concerns about Stone.  Remnant, the young adult dance team that sometimes traveled with Stone, announced it would no longer be connected with the ministry. The Times Free Press said at least two members of the board of Stone’s ministry, Voice of  Evangelism — Frankie Powell and Wayne Penn — left after allegations were raised.

… the bureau is gathering information about the misconduct allegations, as well as Stone’s finances and connections to local law enforcement, like the Bradley County Sheriff’s Office.”  Voice of Evangelism has contributed more than $36,000 to the Sheriff’s Office since 2018, for the purchase of in-car cameras and body cameras.

…Stone’s ministry classifies itself as a church and no longer releases financial information.  However, its Form 990 from 2012 listed revenue of more than $17-million, though more recent reports indicate that current revenue might be in the $14-million range.

So let’s leave it here. Do you think he will resign or attempt to tough it through like certain politicians? It won’t work. I think he’s a goner.