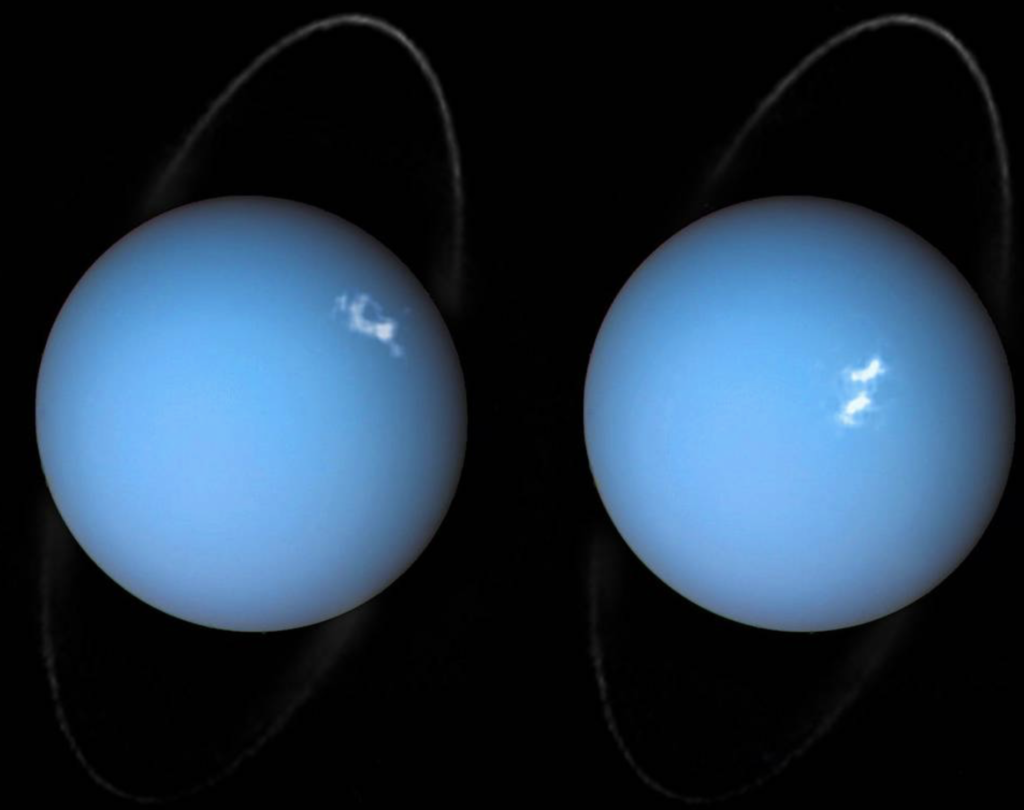 Composite image of Auroras on Uranus by Voyager 2-NASA

“It is not the absence of sin but the grieving over it which distinguishes the child of God from empty professors” ― A.W. Pink

Andy Savage and Tullian Tchividjian: If I had done what these two guys did, I would purposely sink into oblivion, ashamed of my actions. Neither of them shows any ability to earn money except at the hands of pew-sitters who willing to turn over their hard-earned money to two dudes, who in my opinion, have no business playing church. There are suckers born every minute…and these guys know how to play to their weaknesses.

Tullian and Stacie Tchividjian revel in their failures, fudge a bit and forget about repentance.

As most people know. Tullian crashed and burned in his PCA church. He had affairs and claimed that none of them were abusive or coercive.

Tchividjian denies any abuse and does not believe that authority in and of itself introduces abuse into a sexual relationship. He said, “I don’t care what role a person has, a consensual relationship between two adults is not abuse.”

Tchividjian was defrocked by the PCA. Frankly, he didn’t give a damn. He didn’t need the PCA because he came up with a grand new scheme and no one, but no one would tell him what to do. The Sanctuary, Florida, was started and is led by Tullian Tchividjian. He formed the *fuhgeddaboudit” church. Motto: “You don’t bring it up with us and we won’t bring it up with you.”

Of course, he doesn’t need to respond to the fact he was defrocked. He was able to leave the PCA so quickly that it causes me to wonder if he had really believed anything about that denomination, anyway. Did he just use the PCA to get himself a big, honking church and a good salary? He certainly didn’t care anything about the commitment he made to the PCA. He had affairs and then he got a devil of a good idea. “I’ll make everyone losers so no one will ever question the babe and me.”

The Sanctuary is a non-denominational church, gathering in the heart of Jupiter, Florida. Because of what Jesus has accomplished for us, we are a judgment-free zone where people can come as they are, not as they should be. A place to find love and laughter and hope and healing and acceptance and forgiveness and mercy and help.

*The odd thing about this little statement is that he leaves out the word *repentance.* In fact, I looked hard to find the word, *repentance,* anywhere on the church website. I even looked for it on his tullian.net  NADA.

In my Lutheran church’s weekly service, we have a time of confession/repentance. I wonder if TT is conflicted?  I bet that TT and Stacie know they have some issues that even they might think are problematic. For example, TT appears to know that using his position as the cool dudebro pastor to gain sexual favors just might fall under the category of *clergy abuse.”  So, he has adamantly claimed that the affair did not involve abuse. I think he knows if he admits to this, he is out the door.

Did he fudge what actually happened when he met Stacie?

Under the tab, Our Pastor, Tullian asserts the following.

As a result of infidelity, his first marriage ended in divorce and life as he knew it came to an end.

In the aftermath of his season of self-destruction, Tullian met his current wife Stacie—a native Texan. They have been married since August 2016, and together they have five children and two grandchildren.

In fact, TT decided to reconcile with his wife and, at the same time, began his affair with Stacie. Here is part of the timeline from Julie Anne Smith’s Spiritual Sounding Board. Her blog carefully documented TT’s rather prodigious, extramarital sex life.

[I]n the Summer of 2015. A woman by the name of Staci[sic] contacted Lisa and told her she was a friend of Tullian’s, and also lived in the same town as Lisa. She strongly pursued a friendship with Lisa, and regularly insisted the two of them should get together. After Lisa asked Tullian about Staci, and he confirmed that she was “a cool chick,” Lisa exchanged numbers with her. They began talking regularly and exchanged text messages frequently. They even went so far as to make plans to get together. However, Lisa was stood up each time by Staci. In one text exchange, Staci told Lisa that she was going to be in town, so they should get together. Lisa was appropriately confused and said, “I thought you live in my town…” Lisa soon learned that Staci had moved to Orlando for her job.

Orlando, of course, is where Tullian was living at the time. Lisa would later learn the two had begun dating during this time. Tullian and Staci married in September. [Correction: married August 26, 2016.]

This is especially curious, because Staci’s relationship with Tullian began in similar fashion to all the other women he targeted. In fact, he and Staci had been exchanging messages during the time Tullian claimed to be attempting to reconcile with his wife, Kim in the Summer of 2015, after his own sexual misconduct became public.

Stacie admits she began a relationship with TT while he was still married.  (She had a baby out of wedlock and had two divorces prior to becoming Staci Tchividjian.)

For example, I could have not cheated on my first husband. I could have postponed the development of my romantic relationship with Tullian until after his divorce was final

Once again, I believe that TT and ST know that they sinned and they know God can forgive them. But, the word *repentance* is curiously missing from their church, etc. Sadly, this missing element throws their entire enterprise into question.

Both of them should repent and go and do anything but leads a church. Go to a homeless shelter or rescue mission and help the poor and disenfranchised. But I think they really like being in charge and have set themselves up in a perfect little situation in which neither of them will ever be challenged to repent for the pain they have caused countless others.

Here is a little quote from the Sanctuary website that should cause heart spasms in some of our Reformed friends.

TT claims that The Sanctuary is a member of a network of churches knowns as Table Network. I have never heard of this group. Has anyone else? It is difficult to understand what this group stands for. They claim they are kind of like Alcoholics Anonymous.

It’s easy to miss the significance of the anonymity of this international fellowship. To befriend the recovering alcoholic is to sign up for great uncertainty and cost. In AA, there is no leadership ladder to climb, no currency for bartering in the public square, no illusion of leaving behind a shining legacy. They are a nameless, leaderless fellowship with only one condition upon entry: the desire to stop drinking. As a home for people who have tried everything and lost, AA seems like an admonition of sorts to us as we set out to help people find rest and belonging in the finished work of Jesus.

I couldn’t find out the identities of the members. They have been around since 2014.

OUR STORY
After 14 years of pastoring and planting churches in Asheville and Chicago, Russ & Christa found the freedom to be nothing but who they are, love others as they are, and let the good news be as reckless as it is.

​Knowing there were others who longed for the simple way of Jesus among friends and neighbors who hadn’t yet found rest and belonging, the Table Network was formed in 2014.
Today, you can find members extending good news from coast to coast and internationally.

However, you can take a course on their beliefs for a modest amount of money.

My prediction regarding TT:

Prepare for a further scandal. Since repentance isn’t required, why not take advantage of the *get out of jail free* card?

Taking a cue from Tchividjian’s playbook, Savage’s church emphasizes that the people at his church have failed, struggled, and experienced pain.

We are people who have faced valleys of struggle, failure, consequences, pain, and loss.
We have been radically changed by the reality that God’s Grace flows down to meet us where we are and changes us from the inside out.
With humility and gratitude, we have become “valley people” who seek to help others discover the grace we have found.

There is very little on the website that describes the set up of the church. It is definitely not Baptist. It is my guess that it is a nondenominational church. Interestingly, the website does not say who leads the church, either as pastor or a church leadership board.  We know the pastor must be Andy (no last name) because:

Andy starts a new series: Part 1, “Parables: God’s Kingdom Concealed & Revealed”.  Jesus often spoke in parables. Jesus used stories to capture attention, to reveal powerful truths, and to covertly reveal the ethics, values, and morality of God’s Kingdom. At a time where there is so much uncertainty, fear and chaos in the world we live in, this series on Parables will take you on a journey to see, understand, and hold tightly to the real source of peace, hope, and security.

There is a discussion of all those involved being in some sort of circle.

Wisdom – I will refuse to be wise in my own eyes. I will pursue self-awareness and personal growth by inviting feedback and counsel from those in my circle. I will operate in reality and accept disappointment, criticism, and struggles as a gift to help me grow and view blessings as the test of my values and my faith.

They have a stealth Facebook group which is private although it claims 792 members. My guess is that they are still running scared, anticipating protests due to Andy Savage’s molestation of Jules Woodson. They’re probably correct. I’m in the mood for a road trip.

OK, I need to hear from you all.

@AprilCArmstrong It’s sometimes hard when I attempt to quote somebody and I disagree with their assumption in what they say. Page emphasized that it was merely an affair and will not consider any other term. He’s back in the preaching circuit
View on Twitter
0
1

I support this Go Fund Me. My heart goes out to his survivor. https://t.co/csxxbMRNBQ
View on Twitter
2
5

5. Russell Moore's released letters. @CherylBSummers thinks the leak was planned. @wartwatch wants him to disclose who was responsible for "psychological tyranny" he described. What did he mean? #SBC2021
View on Twitter
2
0

6. Secret audio recordings of Ronnie Floyd who doesn't care what survivors say because he wants to maintain the base. @CherylBSummers notes that this is how survivors are treated in the SBC. @wartwatch wants to know who the base is after losing 400K members last year. #SBC2021
View on Twitter
1
0