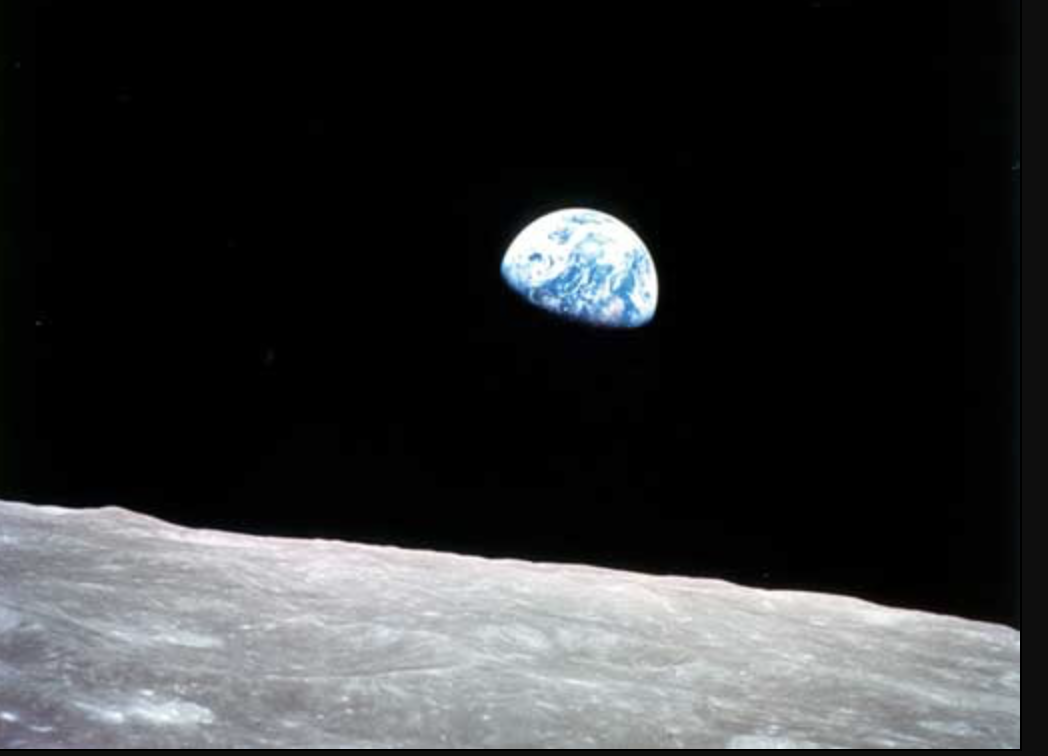 Thirty-five years ago this Christmas (2008), a turbulent world looked to the heavens for a unique view of our home planet. This photo of “Earthrise” over the lunar horizon was taken by the Apollo 8 crew in December 1968, showing Earth for the first time as it appears from deep space.

Astronauts Frank Borman, Jim Lovell and William Anders had become the first humans to leave Earth orbit, entering lunar orbit on Christmas Eve. In a historic live broadcast that night, the crew took turns reading from the Book of Genesis, closing with a holiday wish from Commander Borman: “We close with good night, good luck, a Merry Christmas, and God bless all of you — all of you on the good Earth.”

The writings of Philip Yancey have done much to encourage my faith. Two of his books have challenged me in ways I didn’t expect.

Two of his books have won the ECPA‘s Christian Book of the Year Award: The Jesus I Never Knew in 1996, and What’s So Amazing About Grace?

Yancey is not into notoriety. In fact, as a much loved editor at large of Christianity Today, he suddenly resigned and went to live in the mountains of Colorado.

He is not your typical evangelical. His writings have been admired by both conservatives and progressives. For example:

As a journalist, he has interviewed two U. S. presidents, and other notables such as Bono, Billy Graham, and the authors Annie Dillard, John Updike, and Henri Nouwen. Former President Jimmy Carter has called Yancey “my favorite modern author.

I met Yancey at a retreat in Boston while I was still a single. Even then, I realized that he has a different way of looking at things.I routinely recommences his books to those who are struggling to make sense of their Christian faith. I usually start with The Jesus I Never Knew but, I have read all of his major writings which can be seen at Wikipedia.

Recently, Yancey was interviewed by Nicolas Kristof of the New York Times. I have admired Kristof’s writings, finding him to be fair and thoughtful when it comes to matter of faith. Wikipedia describes him as such:

An American journalist and political commentator. A winner of two Pulitzer Prizes, he is a regular CNN contributor and has written an op-ed column for The New York Times since November 2001. Kristof is a self-described progressive.[1] According to The Washington Post, Kristof “rewrote opinion journalism” with his emphasis on human rights abuses and social injustices, such as human trafficking and the Darfur conflict.[2] Archbishop Desmond Tutu of South Africa has described Kristof as an “honorary African” for shining a spotlight on neglected conflicts.[3]

Was the Virgin Mary a Virgin? Does It Matter? Philip Yancey, an evangelical Christian writer, responds to my questions, and my doubts by Nicolas Kristof.

I loved the following dialog. You can sign up to view a few articles before they tell you that you need to subscribe.

Welcome to the latest in my occasional series of conversations about Christianity. Here’s my interview, edited for space, with Philip Yancey, an evangelical Christian writer who has more than 15 million books in print in more than 50 languages.

KRISTOF Merry Christmas! And let me start by asking about that first Christmas. Do you believe in the Virgin Birth? Doesn’t that seem like one of those tall tales that people tell to exaggerate an event’s significance?

YANCEY I’m smiling at the question. A hundred years ago, the Virgin Birth was considered so important that it made the list of five “fundamentals of the Christian faith.” Nowadays, with in vitro fertilization, virgin births are old news. For me, the issue centers not on the mechanics of reproduction but rather the nature of Jesus. In the Incarnation, God’s own self came to earth as a human. I wouldn’t pretend to guess how divinity interacted with human DNA, but that’s the mystery the Virgin Birth hints at.

So it’s no longer such a big deal? I can say that I doubt the Virgin Birth without whispering?

It’s only a big deal if you believe that Jesus is the Son of God, as most Christians do. Otherwise you have a different mystery: How did the child of two simple villagers end up changing history more than anyone before or since?

Kristof Isn’t it possible to admire Jesus’ message in the Sermon on the Mount without buying into the miracles? Why can’t we subscribe to Jesus’ message of love while dropping the walking on water, the multiplying of loaves and fishes, the raising Lazarus from the dead?

Yancey Certainly you can admire the message alone, and many people do. I don’t know of anyone who tried more conscientiously to follow the Sermon on the Mount than Mahatma Gandhi, a Hindu. But do we lose something by ignoring or rejecting the miracles? I think we do. John’s Gospel calls them “signs.” They signify something about a God who wants creation renewed so that the blind see, the lame walk, the hungry are fed and the dead resurrected.

Kristof  But if we give credit to Jesus for raising Lazarus from the dead, what about all the children who died whom he did not raise? And why allow them to die in the first place?

Yancey I have no solutions, merely a few observations. 1) You’re in good company. The Bible is full of honest lament about suffering, beginning with the Book of Job and including Jesus’ cry of abandonment on the cross. 2) God is on the side of the sufferer. Jesus demonstrated that by always responding with comfort and healing, and by refuting those who saw suffering as punishment. 3) As Dostoyevsky set forth so eloquently in “The Brothers Karamazov,” Jesus turned down shortcut solutions — “miracle, mystery and authority” — during his temptation in the desert. Somehow the ultimate healing required God’s own self-sacrifice on the cross.

Because of the books I’ve written on suffering, I’ve been invited to speak at Virginia Tech, Columbine and Newtown. Believe me, the hope of resurrection means something when you’ve just lost your child to a school shooter.

To end this post, I want to share my favorite Christmas song. I daily begin to feel despair as I write post after post about abuse and the church. Yet, somehow in the midst of feeling sad, I suddenly am encouraged as the Holy Spirit reminds me that God is still present, promising us that one day all tears will be wiped away and justice shall prevail.

In the meantime. I pray that all of us can express God’s peace and goodwill to men (and women.)

Merry Christmas. I am daily blessed by your presence and your stories.