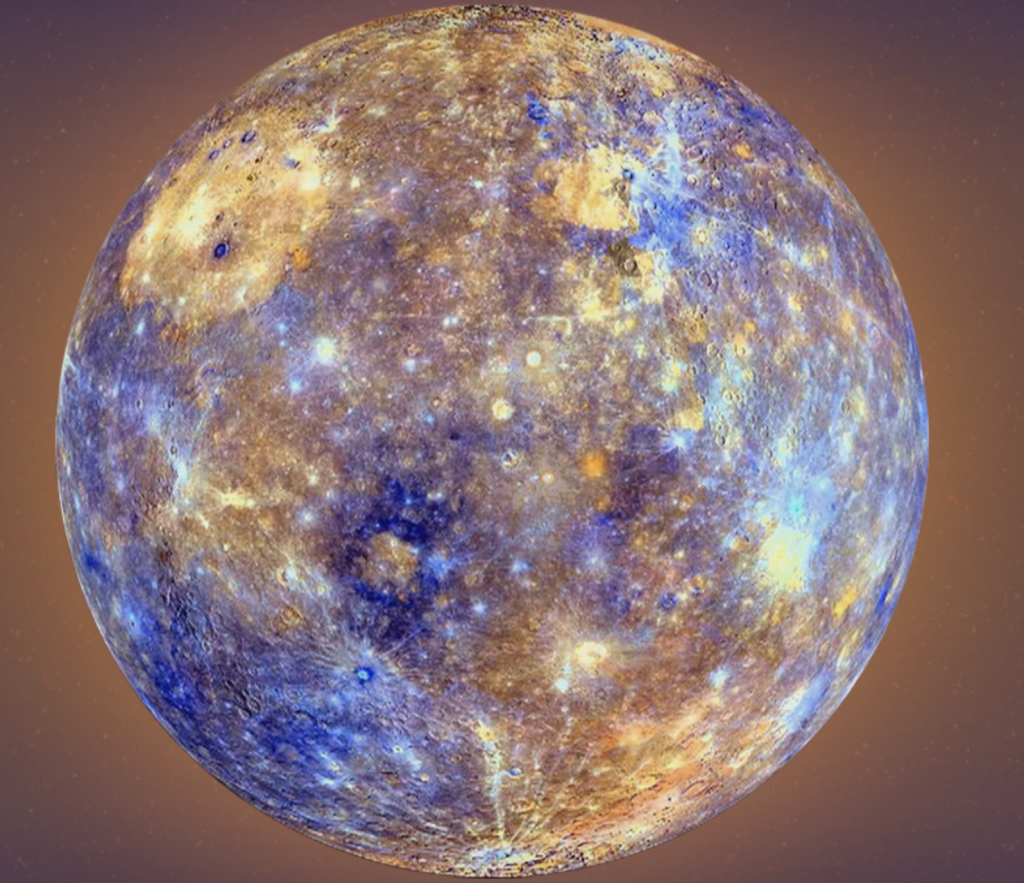 “Taking something from one man and making it worse is plagiarism.” George A. Moore

A number of us (bloggers and concerned citizens) were involved in the revelations surrounding the plagiarism by Mark Driscoll. (There was much, much more bizarre stuff about Driscoll but we will concentrate on plagiarism for this post.) Janet Mefferd confronted him on her radio show. Shortly after that Mefferd’s job was on the line because Al Mohler’s office registered his extreme displeasure at her willingness to speak the truth. It is important to understand that Papa Bear Mohler is one of the “4” in T4G. The other 3 are Mark Dever, CJ Mahaney, and Ligon Duncan. Papa Bear, Duncan and Dever were huge supporters of CJ Mahaney and also expressed their early on support of Mark Driscoll.

Dee is dying to see what is going to happen with T4G now that Mahaney has been thrown under the bus by Papa Bear. Ligon Duncan and Mark Dever have remained quiet, perhaps sticking their fingers in the air to see which way the wind bloweth.. I also wonder if there is some sort of contract between the 4 that involves money.

Papa Bear, Dever and Duncan issues a statement supporting their BFF and business associate, Mahaney here. Denny Burk couldn’t wait to jump onboard to be with the Fab 4,

I never understood these men who claimed that they are the elucidators of the true gospel. How did all of them get taken in by Mahaney and Driscoll?

As time has progressed, I’ve watched with confusion as these men and their many followers support each other in their various debacles. I’ve actually started keeping notes on those who jump to the defense of various men as I write posts, such as the one on Ed Stetzer and the car. Women, who stay quiet on the sex abuse in the SBC, jump into the Twitter fray to give support to the rather embarrassing antics of their tribal leaders. One day, I shall write a post with the notes I’ve kept….

Now, it should not come as any surprise that Ligon Duncan, fan boy of Mahaney and Driscoll, should jump to the defense of another one of the inner circle who appears to enjoy the words of other men so much that he incorporates them into his speech.

Here’s the bottom line. It appears that the tribal loyalties trump truth and transparency. Ligon Duncan has proven this time and again.

My good friend, Todd Wilhelm, has researched this critique carefully. It’s worth reading. Just know this-if your kid had done that at their seminary, they would have been expelled.

Side Note: Todd will be attending the next phase of Tom Chantry’s trials. We will keep you posted. 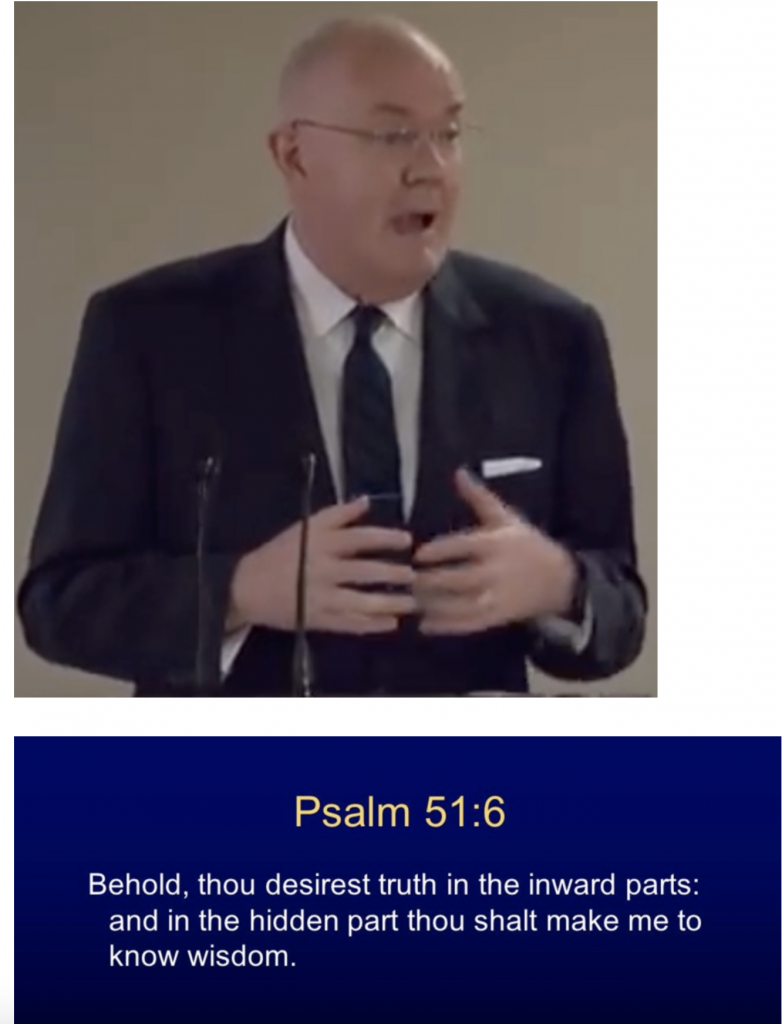 (Note: For helpful background on my article I suggest you first read the article “A matter of attribution” World Magazine, March 14, 2019 If, in the future the link above does not work the article may be accessed on the Wayback Machine at this link.)

The following story is one more example of shameful behavior by an Evangelical leader. This article is about Derek W.H. Thomas, a “distinguished” author, seminary professor and senior pastor. Thomas is also, in my opinion, a plagiarizer.

Adding to the troubling story of the plagiarism by Derek Thomas is the fact that Ligon Duncan, a friend of Derek Thomas, is once again found defending a man of questionable character. While Duncan is not the only man to defend Thomas’ actions, it is disturbing to see a de-facto “gatekeeper” of “the good-ole-boys club” once again provide cover for a colleague who, in my opinion, should be disqualified from the ministry and terminated from his job as a professor at the Reformed Theological Seminary. (You will recall that Ligon Duncan, along with Albert Mohler, and Mark Dever, signed a statement of support for their good friend and “Together for the Gospel” buddy C.J. Mahaney. Recently Albert Mohler has distanced himself from C.J. Mahaney, but to my knowledge Duncan and Dever have not retracted their signed statement of support nor ceased their support of him. Mahaney is credibly accused of blackmail and the covering up the sexual abuse of children while he was the leader of the Sovereign Grace network of churches.) 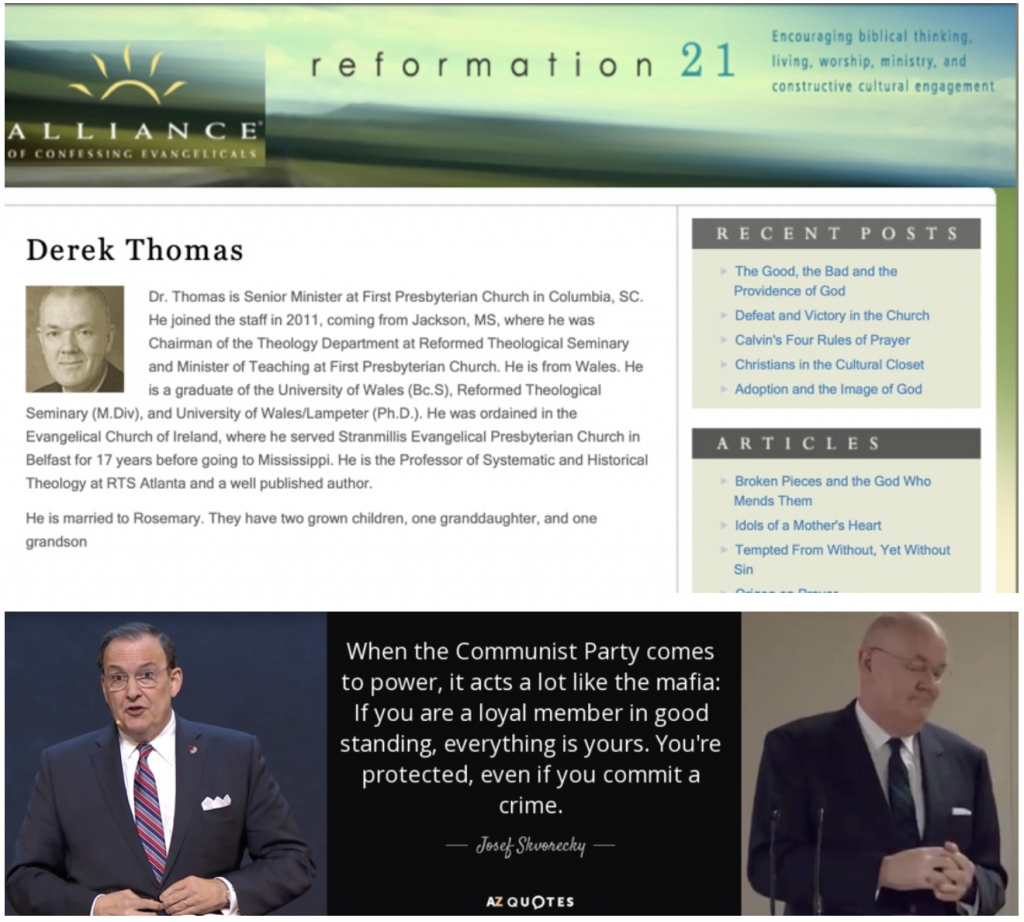 Carl Trueman from the Mortification of Spin Podcast of 6/18/2014 titled “Pastoral Plagiarism,” referring to Evangelicalism, states “the brand is fundamentally corrupt” and “tragically, as is so often the case, Evangelicalism, big church Evangelicalism, has much lower standards than the pagan world out there.” I agree with Trueman.

Todd Pruitt, a member of the Mortification of Spin team, praised Derek Thomas several years ago in a blog post he wrote. I will be watching to see if the MOS team will now be willing to call out Derek Thomas on his plagiarism.

P&R Publishing convened a committee of editors to look into the charges of plagiarism by Derek Thomas. While I do not know the names of all the committee members, I do know that Iain Duguid was one member. 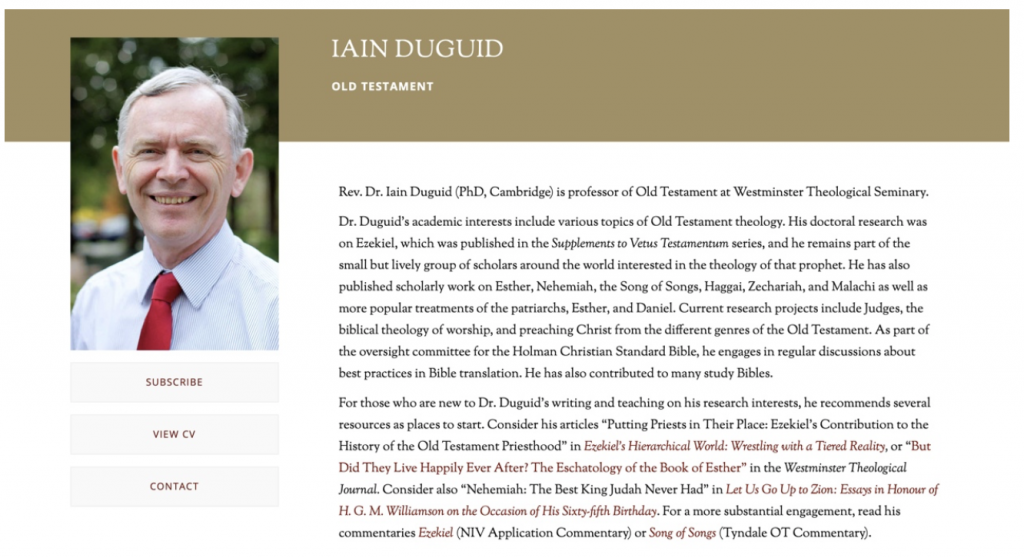 I’d like to believe Duguid is an honorable man, a man fit to teach aspiring pastors. As you can see from his comment below,  he knew plagiarism when he saw it and he has had the courage to publicly call Derek Thomas’ work what it is – serious and substanial plagiarism – not “unclear note-taking.” Unfortunately, it is obvious his viewpoint didn’t prevail with his colleagues. I don’t have inside information on how it all went down, but had I been on the committee I would have resigned rather than agree to calling Thomas’ plagiarism “unclear note-taking.”

I wish I could say the same for all the editors. Unfortunately, Evangelical Christianity is plagued with an abundance of men who fancy themselves leaders, but they lack the backbone to stand up under pressure and do the right thing. They are wimps in suits and their actions show them to be unfit leaders. 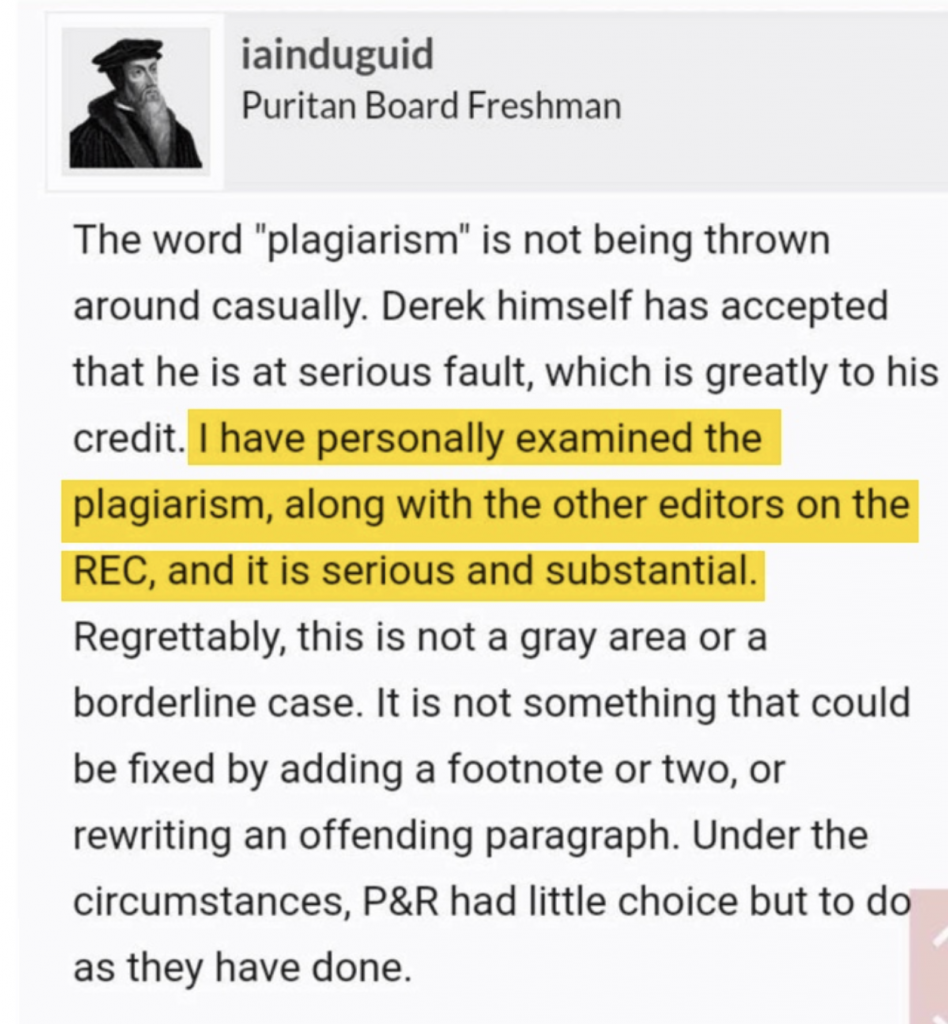 Evangelical leaders, do you wonder why we peasants in the pews are deserting your churches? Because we are watching you seminary professors, you senior pastors, you authors; we are watching and waiting for you to do the right thing, the godly thing, and time after time we are disappointed with your compromising ways. We are disgusted when you choose your paycheck, your career, and your path of ease over doing the right thing. We are done. You men who fancy yourselves leaders are rotting away on the inside, just like the old man in this video.

Let me now cut to the chase. Below is a side by side comparison of Sinclair Ferguson’s transcribed sermons and passages from Derek Thomas’ commentary on Acts.

Derek Thomas Plagiarism of … by on Scribd

Below is a screen shot from “The Daily Genevan” blog. To my knowledge they were the ones who first broke the story of the plagiarism of Derek Thomas.  I believe the blog post has now been removed. I totally agree with the words I highlighted in yellow. 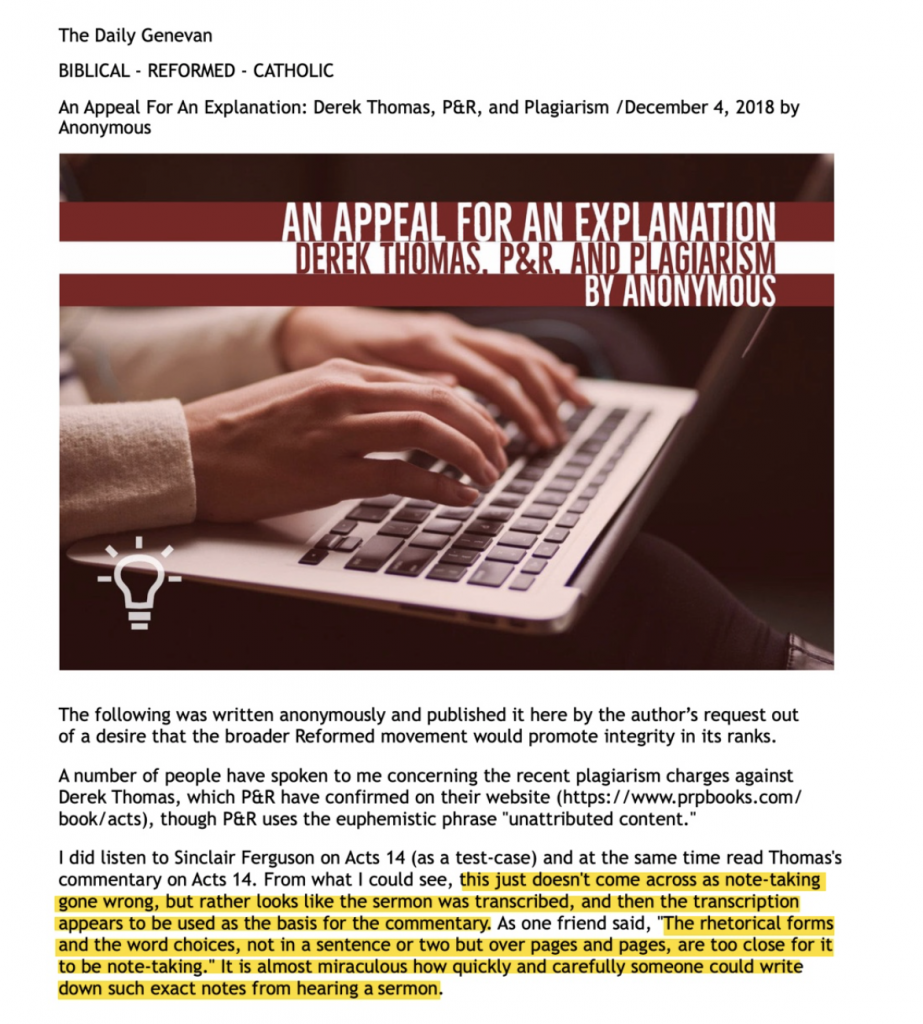 Below is a video taken from a sermon Derek Thomas preached on April 8, 2019 titled “The Holy Spirit and the Doctrine of the Trinity.”

What I find interesting is Thomas states that he could recite large chunks of Sinclair Ferguson’s book from memory, yet he would have us believe that this same keen mind was simply unclear when reviewing his notes from sermons by Sinclair Ferguson, notes which he often transcribed verbatim for his commentary on Acts.

Below is a video taken from a sermon Derek Thomas preached on May 12, 2015 titled “Be Ye Holy.”

Thomas gets a good laugh from his audience when he states he is terrified someone might steal his text! We are left to wonder how does he think other men feel when he steals their text?

Below is a video  of the distinguished Derek W.H. Thomas speaking at Kevin DeYoung’s church.

Thomas states that ten days prior to his speaking engagement at DeYoung’s church he realizes he had no notes on 2 Chronicles 21.  Lacking his own notes it appears our distinguished friend went on-line and listened to a sermon DeYoung preached at his church two years prior. You can access that sermon here.

Below the video clip you will find a side by side comparison I made of quotes from the two sermons. After you examine them I am confident that you will find, just as Ligon Duncan and I have, that the distinguished Derek W.H. Thomas is innocent of any knowing and intentional plagiarism. The similarities between the two sermons is obviously the result of unclear note-taking by Thomas.  From my standpoint I now consider the case closed. (Sarcasm off!)

I wonder if Kevin DeYoung knows his sermon was plagiarized by Derek Thomas. Thomas had the nerve to rip-off DeYoung’s material and then use it in a sermon he preached at DeYoung’s church!

It’s also interesting to note that Thomas suggests they “swap pulpits.” This is a common practice among our distinguished Evangelical leaders, used to make a quick buck or two. A guest speaker is typically given an honorarium fee, generally one or two thousand dollars.  Perhaps a man of Thomas’ stature demands even more.

I have heard that Kevin DeYoung has told others he believes Thomas is innocent of the accusations of plagiarism. Of course DeYoung also believes Mahaney is innocent of all accusations – he authored the official statement of support for Mahaney published by TGC. To my knowledge DeYoung has never retracted that statement. RevKev is one of the men I refer to above who is rotting on the inside. He is a shrewd businessman who would never bite the hand that feeds him. (One of those hands belongs to Derek Thomas’ friend Ligon Duncan – another empty suit.) 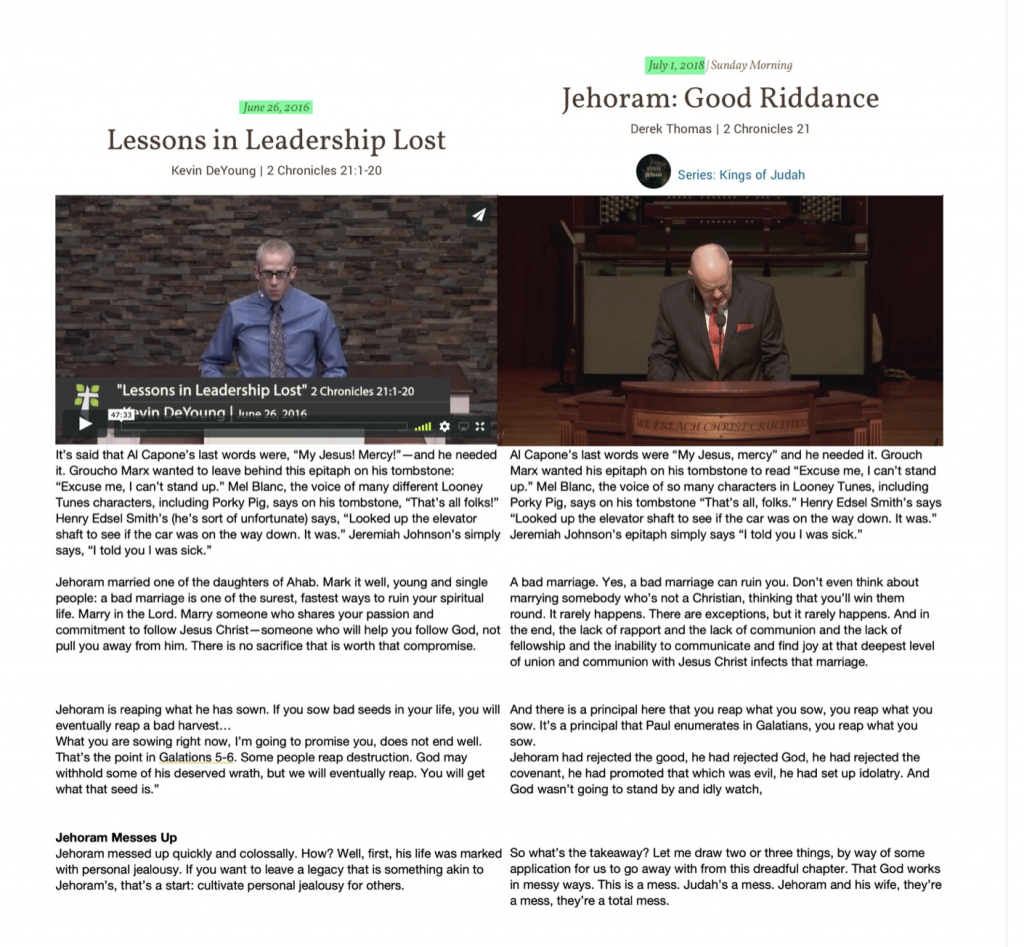 My question to the members of the Boards of these institutions is how, in the light of what Iain Duguid  classified as serious and substantial plagiarism by Derek Thomas, he can be allowed to continue to be employed as a professor at these seminaries? Students are expelled for plagiarizing, yet their professor remains employed! Is this not hypocritical? 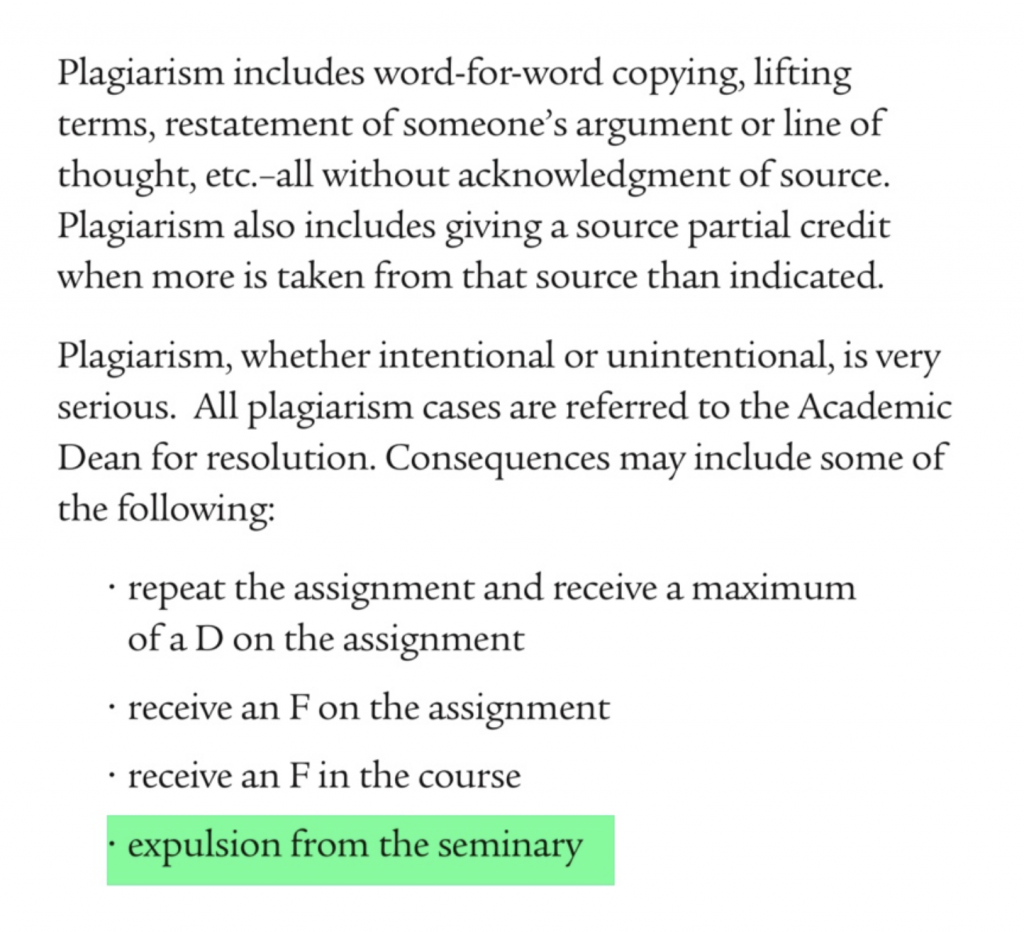 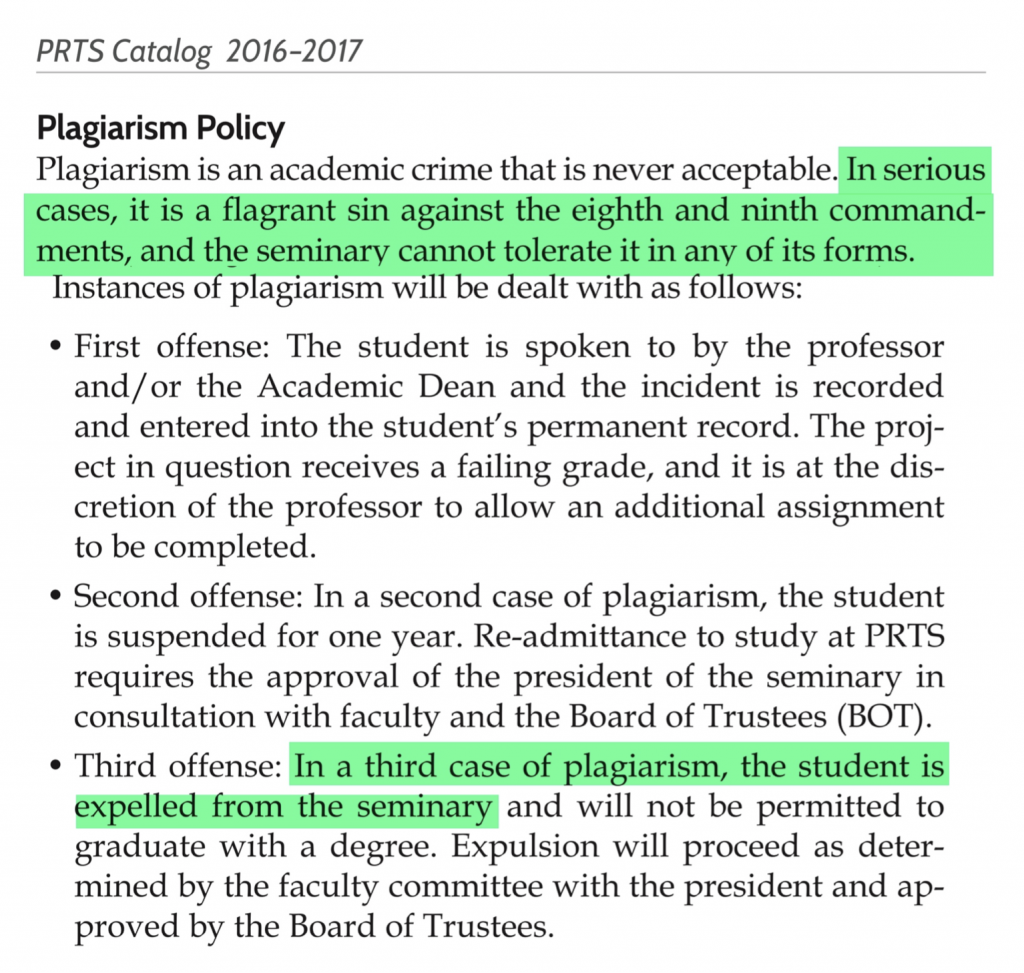 Does Plagiarism Matter to Christians? by Warren Throckmorton