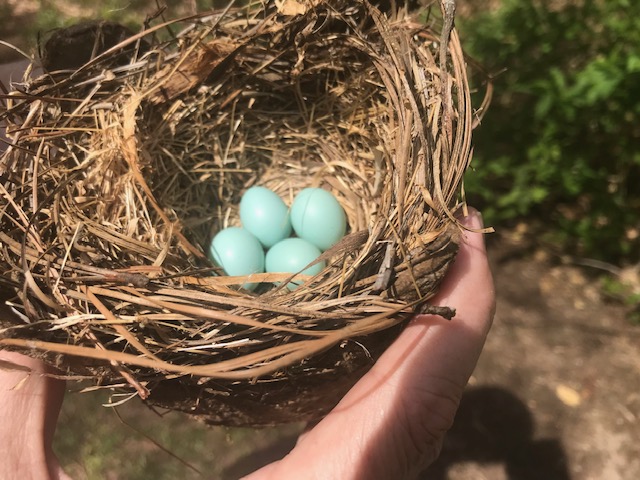 New life in my backyard- bluebird eggs (Yes- you can hold the nest! The mom knows me.) We have launched over 50 bluebirds through the years from our bluebird house.

“It is not your business to succeed, but to do right; when you have done so, the rest lies with God.” –

A two-month donation tally on Harvest Bible Chapel’s website hints at the turmoil the popular evangelical Christian church has been experiencing since the beginning of the year.

Tithes and offerings, the church said in a March 10 update, are down 40 percent since its charismatic but controversial pastor, James MacDonald, was fired in February.

….Since MacDonald was ousted, several other elders and church leaders, including MacDonald’s two sons, left the church. A national accreditation group suspended the church for violating financial stewardship standards. Then, last week, another shoe dropped: Rick Donald, an influential member of the executive ministry, resigned, and a respected elder quit after publishing a letter criticizing the board for carrying on business as usual.

A review of public records, internal church documents and interviews shows the discord at one of the biggest churches in the Chicago area has been boiling for years, the culmination of an aggressive expansion strategy and MacDonald’s ambitions in spreading the gospel. That growth led to a series of questionable financial maneuvers and a tangled web of property transactions, building purchases, mortgages and lawsuits.

In my opinion, The Chicago Tribune missed the deeper story. Sure, the church is experiencing significant debt. Yes, giving is down. It should be. Why would anyone would give even a dime to the church after hearing the embarrassing antics of those who ran this church? I wouldn’t give until I had proof positive that the church has cleaned up its act.

The apparent downright evil and sinister behavior on the part of James MacDonald, combined with the substandard and grossly negligent oversight on the part of the elders, along with the spineless, lily-livered pastors and ministry leaders who circled wagons around this man, have led the church to this hour.

The implosion of Harvest Bible Chapel and Willow Creek Community Church have led to a watershed moment for evangelicals in the Chicago area. Will Christians take a good hard look at how they define a church and how they *do* church or will they jump right back on the bandwagon, looking for the next leather jacketed, high rolling and high-profile pastor?

To be frank, I’m not sure what path will be chosen by the remaining members of these churches. Will they choose to live out the simple faith of Jesus or will they choose another Elvis-like showman? Believe it or not, the Christian faith will do just fine if HBC and WCCC fade into infamy. Jesus doesn’t need them. They (and we) need Jesus. We need to get our role in this whole faith thing straight. See the quote at the top of this post. Somehow, the faith will survive without a herd of white-tailed, trophy deer and stress free safaris for pastors.

The statement by Jacob Ross was sent to me by some folks who are trying to get past the false facade that was Harvest Bible Chapel and James MacDonald. Anyone who truly understands the Gospel should understand that man is sinful and that there is little value in trying to hid our darkness. The world is not stunned by our sin. They see it all quite clearly, even when we think we keep it cleverly hidden. The world is stunned by men and women who claim to *do it right* and then don’t. They see the lie.

Here is a difficult truth. We must not hide our dirty laundry. It must be brought into the sunlight so that the world can see what we mean when we say we need the Gospel. We must admit our propensity to sin in the presence of a watching world. Then we must repent and make reparations. Maybe then, seeing our humility, others might find this Jesus to be worth their time.

Jacob was James MacDonald’s personal assistant. It appears that MacDonald couldn’t get *de-stressed* without spending huge amounts of church money on things like safaris, resorts, luxury cars, etc. MacDonald didn’t really like to spend time with most of his staff and, if I had to guess, with most of the members of the church. He was far too busy with things like buying houses, acquiring trophy deer and killing beautiful bears.

It appears that he has a volatile temper which he coupled with insulting words thrown at anyone who didn’t do everything in his or her power to make MacDonald’s day filled with luxuries and ease.

Perhaps the most damning allegation of all was the fact that MacDonald believes that he is really, really special and that everyone needs to be fully aware of this fact, including pastors in Nepal who apparently didn’t appreciate the fact that they were in the presence of true greatness.

Isn’t there anyone in MacDonald’s life who can speak the truth to him? Or is everyone, even his own family, enjoying the lifestyle too much? Doesn’t he have any real friends or are they all just hangers on? In case you think he might be having a tough time right now, repenting on his sabbatical…take a look at an alleged good time being had by all in Cabo San Lucas.

Whenver I throw someone off my blog for being mean, I post this song “Time to Say Goodbye.” It seems a fitting end to this series of statements.