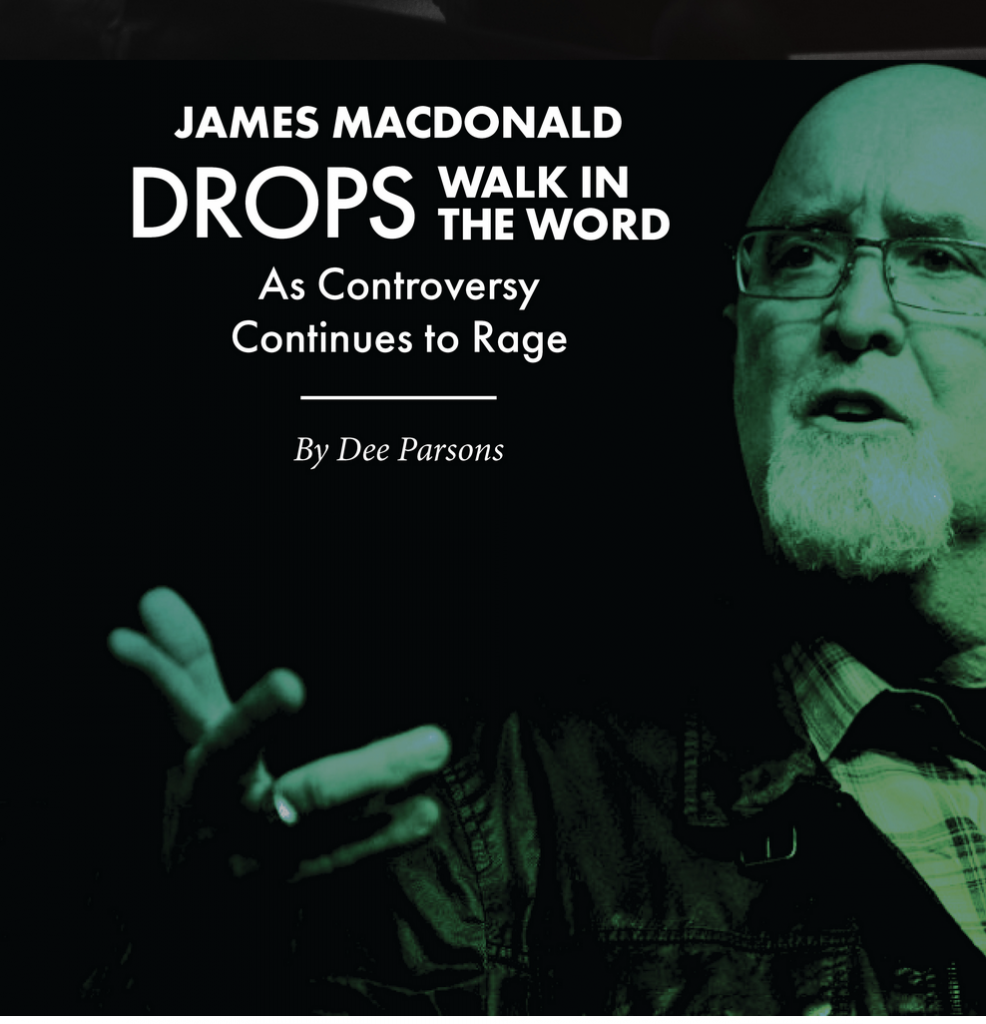 MacDonald claimed that he did this because:

What is the real story? Could it be the current controversy?

Over the past several weeks, numerous radio listeners have told me that they contacted Moody Radio to complain about the network carrying Walk in the Word.

“While we’re not at liberty to discuss programming selections, we prayerfully and closely monitor the impact of all Moody Radio programs to our constituents, and we invite you to join us in continued prayer for a Godly resolution to the internal conflict at Harvest Bible Chapel.”

MacDonald claimed that this decision was due the decline in traditional broadcasting.

But the elephant in the room is the current controversies swirling around MacDonald’s ministry. MacDonald hinted about this in Roy’s article.

Harvest Bible Chapel, anticipating that questions would arise around this decision, answered questions on their website. (Those elders are sure busy these days.) They claimed that younger consumer preferences for digital media was the driving factor in their decision.

Traditional media formats retain audiences that are (literally) dying off and completely missing the new generations of people who also hunger for strong, challenging biblical content. These typically younger audiences don’t watch Christian TV or listen to traditional radio; think of Netflix or podcasts as digital and network news or the local Christian station as traditional. While we love the idea of reaching seniors with content to feed their souls and support that season of life (which some of us are not far from :-), we believe we are called to invest in future generations who will serve Christ and build His church when we are gone.

HBC wants the readers to know that this is a decision that has been a long time in coming.

No, especially to those responsible for leading the ministry of WITW, which historically has discussed the gentrified broadcast schedule maintained by most Christian radio stations. In the past few years, staff hires have focused on accelerating the development of our digital footprint. In the spring of 2018, we moved away from a long-standing supportive partnership with Roger Kemp and Company, who helped produce and distribute our radio broadcast. Late last summer, when our much loved former Executive Director Janine Nelson relocated to Michigan, we brought in Dan Sumpter, a gifted young leader on our staff for 8 years, who has a calling to use digital media to reach a new generation.

The part that made me chuckle is when they pointed out  MacDonald’s *viral video* “Homeless man…is the pastor?” Ah, stunts-that’s what will bring them in….

Why didn’t they do this sooner? Let’s see if you can figure this one out.

In 2017, with the role of overseeing the churches we plant no longer sustainable, Harvest stepped away from leading Harvest Bible Fellowship (now grouped under multiple church planting entities, like Vertical Church Network and Great Commission Collective) and announced we would focus our efforts on helping midsize churches (1000+) and ‘mega’ churches (2000+) move into church planting as a recurring priority. An unforeseen benefit of that difficult decision was a release from maintaining any particular local broadcast signal in support of churches we had planted, who were also freed to associate and partner as they believe the Lord is leading them.

My take? HBC and MacDonald are experiencing significant blowback from their decision to sue The Elephant Debt, their wives and Julie Roys.

My recommendation? Drop the lawsuits and start acting like a church instead of conglomerate.