I went to law school. And I became a prosecutor. I took on a specialty that very few choose to pursue. I prosecuted child abuse and child homicide cases. Cases that were truly gut-wrenching. But standing up for those kids, being their voice for justice was the honor of a lifetime. Susana Martinez 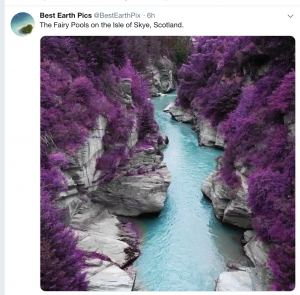 Todd Wilhelm has been writing up a storm since he returned from Dubai. As our readers know, Todd had a rough time in Dubai with 9 Marks. He was a member of a Sovereign Grace church prior to moving to Dubai. Needless to say, he knows the drill.

This is an horrific story. An ARBCA couple, who believed they were following the teachings of the *bible,* burned a tiny child by immersing her in scalding water, leaving permanent scarring on her bottom. I believe it is important for readers to understand that ARBCA and Sovereign Grace  place an emphasis on their teachings to be followed by their attendees.

*Biblical counseling* and the abuse of little child.

Would it surprise you to learn that the pastor of the Sovereign Grace Church considered himself a biblical™ counselor? I didn’t think so. In 2010, we posted Connecting the Dots . . . SGM, CCEF, and Peacemaker Ministries.

Add to that the series I’ve been doing on the embarrassing lack of education that *biblical counselors* receive and you can imagine the problems that might occur when said counselor is confronted by a terrible case of child abuse.

Then, there is the embarrassing history of Sovereign Grace Churches and alleged sex abuse coverup…

What is the relationship between Sovereign Grace and ARBCA ?

Could a merger be in the works?

I believe it is safe to assume that the ARBCA church and the Sovereign Grace church share similar teachings. So, could it be that Sovereign Grace Churches and the rapidly diminishing ARBCA denomination will join together in one happy, likeminded conglomeration? Stay tuned.

Two weeks ago I wrote an article titled “ARBCA Insider John Giarizzo is Caught Lying, Admits ARBCA Cover-up Yet Manages to Keep Job.” At the end of the article, I commented on the relationship between Giarrizzo’s church – Grace Covenant Church – and Sovereign Grace Church of Gilbert. (A church I was formerly a member of.)

You may recall that Trey Richardson, one of the pastors at Sovereign Grace, had lectured on Biblical counseling at a Sunday school class at Grace Covenant Church three years ago. In an attempt to ascertain what the relationship was between the two churches, I had attempted to contact Trey several times, leaving four messages, but he never returned any of my calls.

Trey Richardson fancies himself to be a professional counselor of sorts. His bio on the Sovereign Grace website states:

“Trey is a trained, experienced and skilled Biblical counselor who walks out his passion for prayer and pastoral care by overseeing Small Groups, the prayer team and compassionately counseling couples and individuals.”

But to my knowledge, Trey is not a professionally licensed counselor.  I believe he has taken some courses through CCEF (Christian Counseling & Educational Foundation) but CCEF, on their website, clearly states:

“Please note that CCEF is not a certifying agency. CCEF does not “certify” or “endorse” counselors who have completed one of our certificate programs. If you wish to refer to yourself as a “certified counselor” or “certified biblical counselor,” you should pursue certification through an organization that provides this type of certification. Some organizations will accept CCEF courses as part of their training requirement. Licensure as a professional counselor is offered through state agencies and typically requires a graduate degree from an accredited institution.”

That Trey Richardson is clearly not a professionally licensed counselor will become evident as you read the rest of this article.

As a prelude to this article, you may wish to read an article I published on August 14, 2018 titled, “More Child Abuse Perpetrated By Members of an ARBCA Church.” It will give you the necessary background to the information below.

Caleb and Mary Beery were members of San Tan Reformed Baptist Church, this church was a member of ARBCA and was “planted” by Grace Covenant Church, mentioned above. (I plan on writing another article which will deal more in-depth with the crimes of the Beery’s,  but the purpose of this article is to expose, once again, Sovereign Grace Churches care for the perpetrators of crimes against children while showing no concern for the wounded children. This seems to be systemic throughout the Sovereign Grace Churches denomination, a part of their DNA, if you will.)

The Beery’s are both now convicted felons, having plead guilty to two counts of child abuse. They both accepted plea bargains and will be serving six months in prison followed by seven years of probation. They claim to have used excessive force in disciplining a one-year-old child in their care whom they had hoped to adopt. They said they “disciplined” her for not coming when called by spanking her with a spatula. What in fact took place was the little baby was dipped in scalding water, causing burns on her bottom which have scarred her for life.

The screenshot below is taken from the Presentencing Investigation report. The entire document can be viewed at the end of this post. 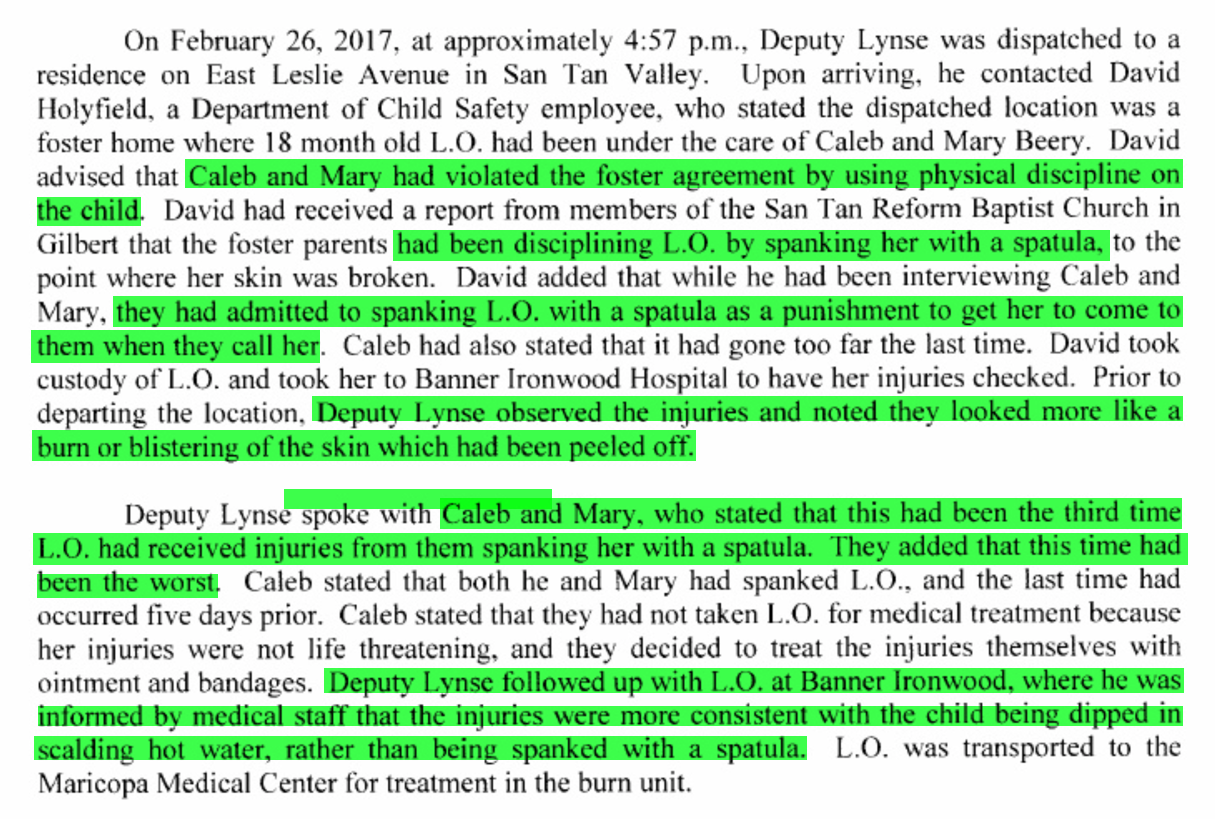 Here is what the adoptive father, speaking on behalf of the baby girl had to say:

Trey would not have had access to the Presentence Investigation report as it wasn’t filed with the court until October 10th.  If he would have had the report he would have known that the Beery’s purposely burned the infant in their care. As the evaluation below states, “the injuries caused to the victim are extremely troubling.” I also doubt the Beery’s were truthful with Trey and Charlotte because in all of the documents I have read nobody who is in contact mentions the burns. All they seem to admit to is that they spanked the child with a spatula, using excessive force. This is what they “repented” of.  They also admitted (and repented) for purposely disregarding the agreement they signed as foster parents to never use corporal punishment on the child.

I hope Trey was not aware of the fact that the Beery’s intentionally burned the infant in their care because if he was aware of that fact he should have known he was dealing with two individuals who have some serious problems, problems way beyond the scope of his counseling abilities. To know such information and not refer the Beery’s to a professional would be criminal, in my opinion.

Two weeks after the couple started attended the church, Sovereign Grace Pastor Richardson and his son, also a pastor under him, wrote letters of support for the couple to the church.

As it was, the Richardson family – Trey and his wife Charlotte, and their son Rich would have us believe they have gained enough insight into the character of the Beery’s over a two week time period to write positive character reference letters to Judge McCarville! The letters, submitted to the Court, can be viewed below.

Rich admits he has not known the Beerys very long, yet apparently long enough to recommend the Berrys be given work releases from their prison sentence! This is foolhardy. One would think that the senior pastor and a leader in the denomination would possess a bit more wisdom.

Trey, the “trained, experienced and skilled Biblical counselor” doesn’t prove any wiser. After counseling the Beery’s for a “few weeks” he can attest to the exemplary character of the Beery’s because for one thing, they do all their assigned homework! This is just incredibly naive.

What really aggravates me, and yet is historically typical of Sovereign Grace pastors, is their rush to forgive the criminals and even speak of them in glowing terms, while making no mention of the victims. One wonders if the Richardson clan have bothered contacting Jeff and Stephanie Ryan, the adoptive parents of the poor little child the Beerys burned, to express their care and concern for the infant and to see if the Ryan’s would approve of them writing letters to the Court, in essence, asking the judge t0 be lenient with the Beerys, because, after all, they do their assigned homework! This is outrageous. The Beerys should have received longer sentences and they surely do not need to be granted work release while serving their six months. And Sovereign Grace pastors wonder why those outside of their echo chamber detest them? Seriously? 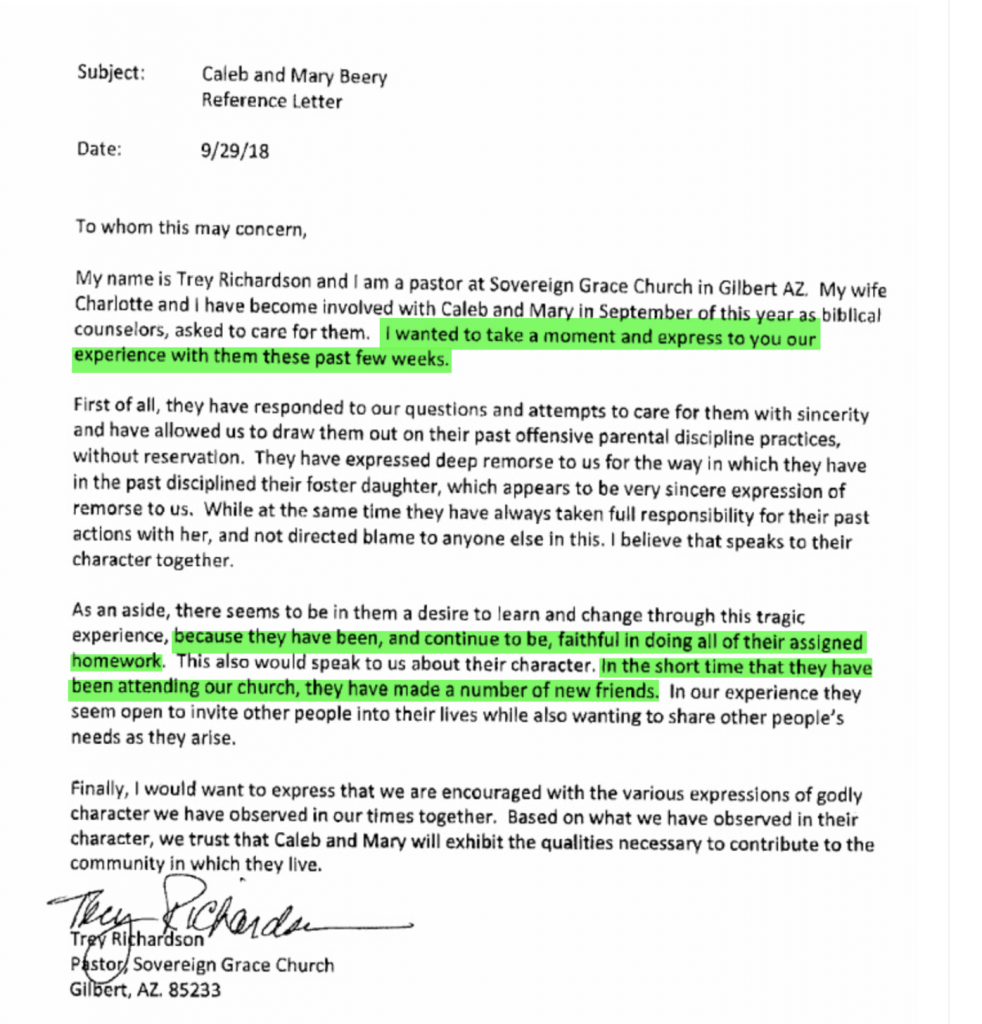 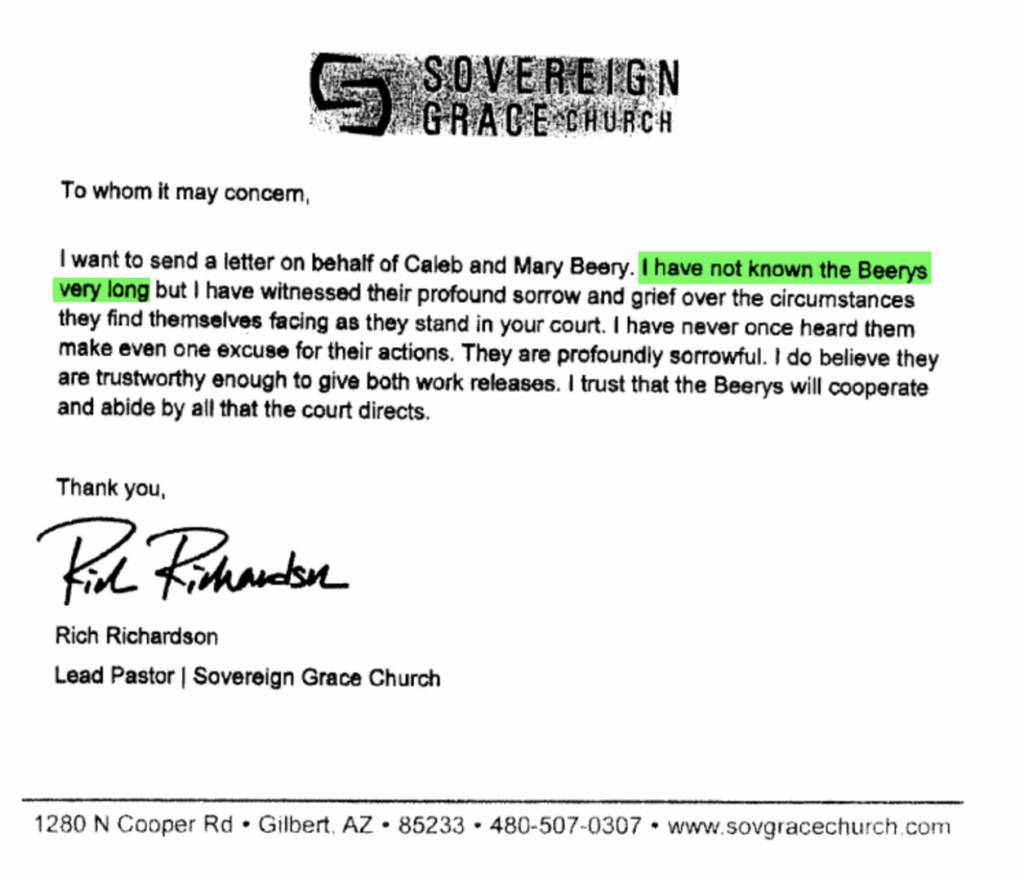 The results of the trial.

If you link to Todd’s post, you will see the entire sentencing document. Here is the synopsis (or whatever legal term they use) of the plea agreement for the wife. In the document you will see that she admits that she and her husband *misinterpreted the Bible.*

For further information on the Sovereign Grace denomination, please read the following articles:

Sovereign Grace Ministries and Abuse: Time to Speak Out
“And the abuser is seen as repentant and restored, and you think, well, maybe it’ll be okay. That process of rooting out sin is really thorough. And they have so much accountability–from their accountability partner and their care group leader and from the pastor.”

PUBLIC RESPONSE TO SOVEREIGN GRACE CHURCHES
by Rachael Denhollander
“In a recent article with Christianity Today I referenced deep concerns with the intentional failure to report sexual assault perpetrated in multiple churches, by multiple elders, at Sovereign Grace Ministries (SGM), now “Sovereign Grace Churches” (SGC). Three days ago, SGC responded to this article and stated I was “mistaken” in my statements and that these concerns “are not true and have never been true”. They further stated that they would not respond to my “false accusations” with evidence as to why they are false, because they would appear “unsympathetic” to victims of abuse. They linked, as proof, to the dismissal of the civil suit against them. The lawsuit was dismissed because the statute of limitations had expired. This is a dismissal on technical grounds only, it had nothing to do with the substantive claims made against SGM. It simply means that the time for which legal proceedings can be initiated has expired and therefore the court no longer has the authority to examine the merits of the plaintiff’s claims. Ultimately, this dismissal means that the evidence against SGM was never examined by the courts. This is not evidence, in any way, shape, or form, that SGM has not done what is alleged.”