“He suspected nothing, the affidavit says, until Pressler groped him when they were alone in the steam bath.” 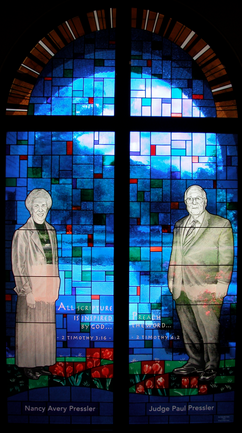 As the #MeToo and #ChurchToo movements have been gaining momentum, we can’t help but wonder whether they have propelled another ‘alleged’ victim of Judge Paul Pressler to come forward.

Earlier this week the attorney representing a man who is suing Paul Pressler for alleged sexual abuse filed the first in a series of affidavits in the United States District Court for the Second District of Texas Houston Division. The attorney claims those affidavits corroborate his client’s claims.

The unnamed individual is a married man, currently in his 50s, and living in New York, according to a Baptist News Global article.

When he was 16 or 17, he was a member of a youth group at a Presbyterian church in Houston. The leader of that church youth group was Paul Pressler. According to the Baptist News Global article, members of this youth group attended a weekend retreat at the Pressler Ranch. Allegedly, Pressler told the teen that there was a shortage of beds and asked if he would be willing to share a bunk with Pressler. According to the affidavit, the teen recalls “feeling a typical teenage aversion to sleeping beside him (Pressler)”, but did not think at the time that it was an unreasonable request. He recounts in the affidavit that during the night Paul Pressler told him that he was cold. Without asking for permission, Pressler rubbed his feet against the teen’s under the covers.

As an aside, how in the world did a Paul (the Presbyterian) Pressler come to have such a tremendous influence over the Southern Baptist Convention?

The affidavit also says Pressler used to take boys from the youth group to saunas and showers at the Houston Oaks Country Club, typically when no other club members were around. They usually would carpool after Bible study in groups of four to 12, but one night he rode with Pressler and noticed he was the only passenger. He asked who else was going, and Pressler said they were the only two.

He suspected nothing, the affidavit says, until Pressler groped him when they were alone in the steam bath.

“I was absolutely not aroused,” the statement says. “I froze. Shocked, stunned and utterly frightened, I had no idea what to expect next. I was naked and trapped — miles from home — and I needed to be beyond Pressler’s reach.”

“My instincts told me to carry on as though nothing had happened — to end the incident with no further incident. With great difficulty, I talked calmly, while staying alert. We returned to the locker room and dressed. Then Pressler drove me to my car without further incident. I went home and from that moment I have stayed away from him.”

Daniel Shea the Houston attorney who filed the April 3 motion, indicated that “other affidavits will follow” and “new corroborators continue to come forward.”

Shea’s motion came in response to a motion for summary judgment filed March 30 by the Southern Baptist Convention, one of a number of organizations and individuals accused in the lawsuit of being co-conspirators. While denying any wrongdoing, the SBC argued that the lawsuit is barred by statute of limitations.

Allowing the case to proceed, the motion said, “would involve discovery regarding documents, events and people spanning 40 years.”

The BNG article concludes with this:

Pressler, a former justice on the Texas 14th Court of Appeals, has denied all allegations in the lawsuit. His attorney did not immediately respond to a request for comment for this story.

You may recall that when the Pressler’s first accuser came forward last year, we covered it here. That post included screen shots of the petition filed on behalf of Gerald Duane Rollins, who alleges he was molested by Pressler from the age of 14 until about four years ago. That post contains some interesting historical information, which we strongly encourage you to read if you haven’t done so already. Here is the portion of that TWW post which bears repeating.

According to a Baptist Press article, it was 50 years ago (March 1967) that Paul Pressler and Paige Patterson had their infamous meeting in New Orleans at Cafe du Monde to discuss their mutual concerns about the liberal direction in which they believed the Southern Baptist Convention was heading. At the time, Patterson was a seminary student at New Orleans Baptist Theological Seminary and Pressler was an attorney (he would be appointed to the bench in Texas three years later).

In his book A Hill on Which to Die: One Southern Baptist’s Journey, Pressler recounts how the conservative resurgence (takeover) of the Southern Baptist Convention occurred. He figured out how to bring about a theological shift in the denomination by the systematic appointment of like-minded Southern Baptists to key positions. The turning point occurred in June of 1979 when Adrian Rogers, a Memphis pastor, was elected SBC president.

Those individuals who played significant roles in the Southern Baptist Convention’s takeover, are being immortalized in stained glass windows in Southwestern Baptist Theological Seminary’s new chapel – the J.W. MacForman Chapel and Performing Arts Center – which was dedicated six years ago.

The total number of stained glass windows that will adorn the chapel is expected to total 69. No doubt the images of SWBTS president Paige Patterson and his wife Dorothy will be featured prominently.

The stained glass window depicting Paul and Nancy Pressler was completed several years ago and has already been installed in the chapel.

What is wrong with this picture???

SBC Voices has also called attention to this most recent court filing against Paul Pressler, and we hope they will continue to follow these developments. We found one comment under the SBC Voices post to be intriguing (see below):

Rest assured, we will be updating our readers regarding any new developments involving Paul Pressler.