“Today, I spoke with Dr. Page and learned that his retirement announcement was precipitated by a morally inappropriate relationship in the recent past.”

Frank Page, one of the most powerful leaders in the Southern Baptist Convention, has suddenly resigned as president and CEO of the SBC’s Executive Committee. The day after he announced his resignation, he provided a fuller explanation, which was included in an article published by Christianity Today. (see screen shot below)

As EC president, the 65-year-old Page has held a key role in coordinating the work of the SBC’s national ministries—encompassing two mission boards, six seminaries, and other entities—and overseeing a Cooperative Program budget of nearly $200 million yearly. Page’s work also included building relationships with 42 state and regional Baptist conventions and 47,000-plus Southern Baptist churches in all 50 states.

Page was the 2006–2008 president of the SBC, elected to the post as pastor of First Baptist Church in Taylors, South Carolina. Before being elected as EC president in 2010, Page served as vice president of evangelization for the North American Mission Board from 2009 to 2010.

Among the hallmarks of Page’s eight years as EC president have been strong calls for personal evangelism; support for the Cooperative Program channel of Southern Baptist missions and ministry support; and inclusion of numerous ethnic groups, women, young leaders, and small-church pastors in the life of the convention.

A Religion News Service article highlighted some of the work Page has done in the SBC. (see excerpt below)

Page was known for bridging the denomination’s various divides. In 2013, Page helped bring together Calvinists and non-Calvinists during a squabble within the denomination about the theology of salvation. And last year, when some churches threatened to cut off support for the SBC after chief ethicist Russell Moore criticized Donald Trump, Page met with Moore and the two issued a statement of unity.

Nearly eleven years ago, when Page was serving as SBC president, a motion was made at the denomination’s annual meeting to develop a central database “listing Southern Baptist ministers who have been credibly accused of, confessed to or been convicted of sexual abuse or harassment.”  (link)

“The issue of preventing child abuse must be dealt with by all Christians, including the Southern Baptist Convention,” Burleson said in his Friday blog. “I don’t have all the answers, but I know that we must do all we can to stop the victimization of our children, and we cannot turn a blind eye toward those who commit such crimes.”

When this motion was presented, Dee and I had never even heard of Wade Burleson, nor had we researched any of the topics we discuss here at TWW; however, both of us were Southern Baptists at the time. As our readers know, Dee has since changed denominations, while I (Deb) continue my Southern Baptist affiliation.

Seven months later… “Southern Baptist Convention President Frank Page said critics of the convention’s policy on sexual abuse by clergy are not really advocating on behalf of children but rather are opportunists motivated by personal gain,” according to a follow-up article in Ethics Daily. Page’s remarks were in a Florida Baptist Witness article as well as a Baptist Press article, as pointed out by this piece in Ethics Daily; however, these two articles are no longer accessible.

According to the Ethics Daily article, Page went on to write the following:

“Let me also share one other word of clarification,” he wrote. “Please realize that there are groups who claim to be one thing when in reality they are another. It would be great if the many groups who are claiming to be groups of advocacy and encouragement in ministry were that which they claim. Please be aware that there are groups that are nothing more than opportunistic persons who are seeking to raise opportunities for personal gain.”

Bob Allen emailed Page prior to publishing his article for clarification regarding the group(s) to which he (Page) was referring; however, there was no response. The only group that had been advocating for the SBC to begin identifying clergy committing sexual abuse was SNAP (Survivors Network of those Abused by Priests).

Christa Brown of SNAP-Baptist called Page’s remarks “a slap in the face for the many, many people who have been victimized by the horrific crimes of Southern Baptist clergy and by the blind-eyed, do-nothing attitude of so many of this denomination’s leaders.”

Then in April 2007, “20/20” did a story on predatory preachers. Frank Page was interviewed and a few of his remarks were included in the program. We strongly encourage you to watch the short 20/20 segment that features Frank Page HERE. (Page appears at the 3:46 mark).

After seeing the “20/20” segment, Page called it “yellow journalism”, as you will see in the following excerpt from an Ethics Daily article.

Page appeared on Friday’s program, saying he agreed to an interview to provide balance to a story he expected to be “overwhelmingly negative.”

After seeing the program, Page, pastor of First Baptist Church in Taylors, S.C., complained Monday in Baptist Press that ABC News used just a few seconds of his two-hour interview, leaving out his comments about what the nation’s largest Protestant faith group is doing to address the problem.

“I felt that it was an intentional slice-and-dice effort to portray the SBC and its president as uncaring and uninformed,” he said. “It was more than a two-hour interview reduced to less than 60 seconds of choppy response. It was a prime example of yellow journalism, in which a broad brush was used and the whole truth was denied a fair hearing.”

August Boto, general counsel and vice president for convention policy with the Southern Baptist Convention Executive Committee, issued a statement criticizing what he said were inaccuracies in the report.

“Unfortunately, the ’20/20′ report last Friday had the effect of misleading at least some of its viewers to believe that the Southern Baptist Convention somehow condones, hides or denies sexual offenses committed by ministers in SBC-affiliated churches,” Boto said. “The convention does none of those things. Quite the contrary.”

Christa Brown shared her thoughts about Frank Page and the 20/20 segment in a post entitled: Blind to ministers’ child molestation convictions: How long does it take?

Perhaps it should come as no surprise that pedophile database has never become a reality in the Southern Baptist Convention. Here is how the news was reported in TIME (Nov. 2008) – see screen shot below. 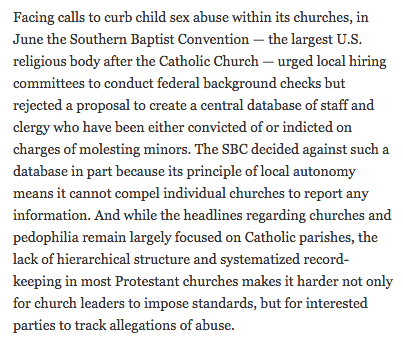 Six years later David Clohessy, Executive Director of SNAP, and Amy Smith, SNAP Leader in Texas, contacted Frank Page once again, and this was his response (see screen shot below). 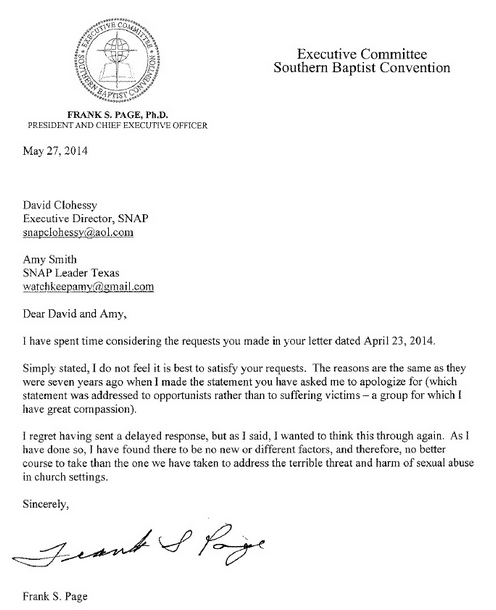 In the wake of the shocking revelation that Frank Page was involved in a “morally inappropriate relationship in the recent past”, we have many more questions about why the pedophile database was never considered by the SBC leadership.

Now that Page is ‘retired’, we believe the SBC should once again consider creating a central database with the names of Southern Baptist pastors who have been “credibly accused of, confessed to or been convicted of sexual abuse or harassment.”

NO MORE EXCUSES! It’s time to protect the children!!!