I’m enormously interested to see where neuroscience can take us in understanding these complexities of the human brain and how it works, but I do think there may be limits in terms of what science can tell us about what does good and evil mean anyway, and what are those concepts about? Francis Collins 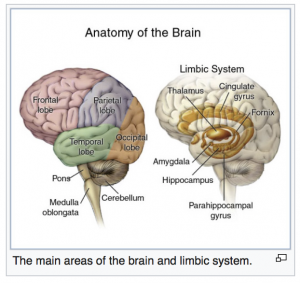 In light of the current tragedy in Florida, this post on the Biblical Counseling Movement (BCM) will be a bit different from the others. I will get back to their publicly available materials in my next post. I want to look beyond the gun control debate, which, while important, does not address the underlying difficulty of serious mental illness. By serious, I mean the type that would lead a young man to kill so many people.

This post is going to be delving a bit into the theology behind the movement in order to better view the inherent problem. I am also going to opening up a bit on the pain and sorrow that my foster grandchild has had to endure which is eerily like Heath Lambert’s story but with a different outcome.

Here are the three questions that I want to discuss. I do not expect easy answers like I believe that Lambert, the BCM and Piper offer. I also anticipate a fair amount of debate.

The infamous Desiring God tweet which stemmed from a John Piper quote in which the clarifying comment made things even more confusing.

Well, that solves all of our problems, doesn’t it? If we stop worrying about ourselves and think about God’s strength and beauty, our problems our solved-easy peasy. Warren Throckmorton wrote about this tweet in an excellent post Desiring God and Mental Health: Name It Claim It for Your Brain

Dr Throckmorton saved me some time by looking at the supposed clarification fn the tweet issued by Desiring God. 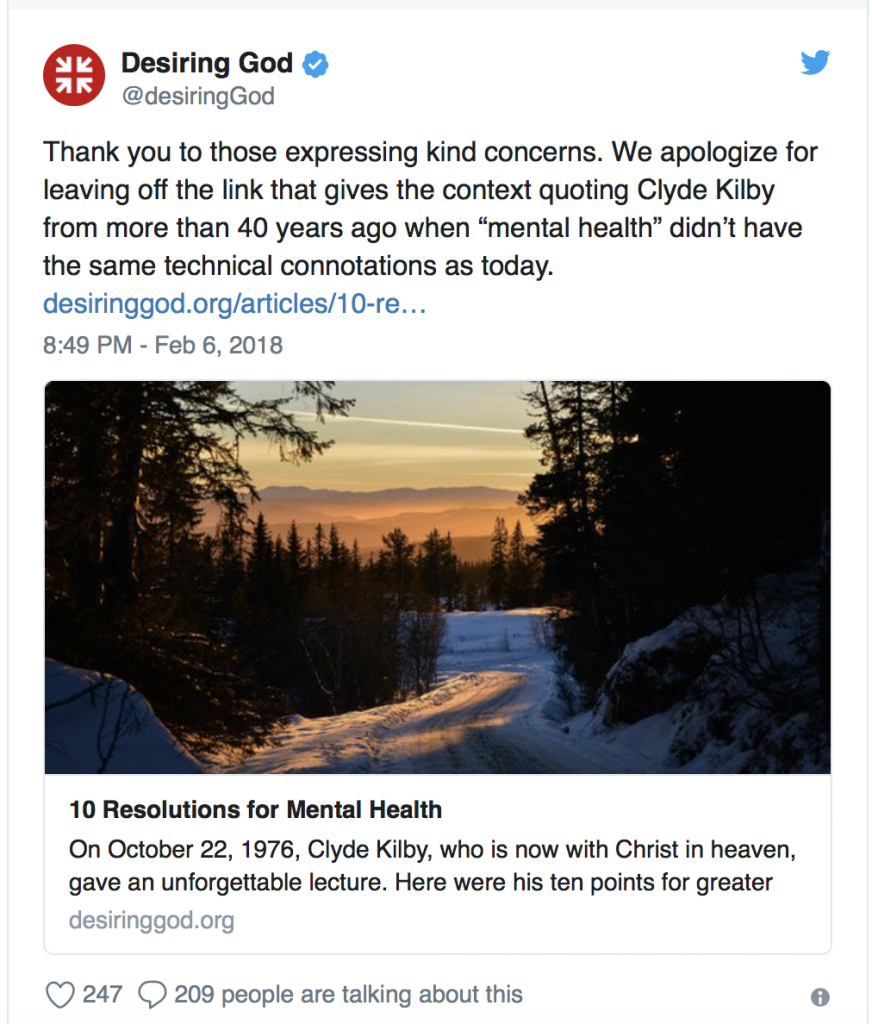 Here is what Dr Throckmortong said.

The link is to a 2007 tribute by John Piper to Clyde Kilby. This follow up tweet is confusing because the original tweet which aroused so much reaction isn’t found in the 2007 article. The closest statement to it is this statement attributed to Kilby by Piper:

Stop seeking mental health in the mirror of self-analysis, and start drinking in the remedies of God in nature.

This isn’t at all what Desiring God originally tweeted. The “remedies of God in nature” could easily refer to medication or therapy or an experience in nature. Since Piper quoted it approvingly I don’t really know what Kilby meant. In any case, I am less concerned with the Kilby article and more concerned with the spin engaged in by whoever is running the Twitter account at Desiring God.

So, it appears that Desiring God is not willing to clarify exactly what they meant. Given some recent tweets by Piper, I would imagine their lives are very busy indeed. The Twitterverse had a field day with this one.

But I digress. Dr Throckmorton said something most important in his discussion of the tweet. It is a criticism that I have had of the general trajectory of the BCM.

When those who don’t succeed with anti-mirror therapy go to church, they feel even worse because their faith is questioned. They are told, even if subtly or indirectly, that they don’t have enough faith. If they just believed harder or put God first, or dealt with the sin in their lives, then the advice would work.

Today, I spoke with a woman who was abused in a church setting by a youth pastor. I hope to be telling her story soon. She told me she was sent to a BCM counselors after discussing her abuse with her pastor. She went for two free sessions and refused to go back for the paid sessions due to the easy peasy approach to counseling. Basically, she was told to meditate on Romans 8 which I take to mean “all things work together for good” verse. Things didn’t quite work together for good as the abuse continued.

Dr Throckmorton gets something that many in the BCM do not.

Repeat after me: Mental health is health. Mental illness is illness. Brain is body.

For many, the remedy is simple. We don’t need meds. This is all in our head and the head is the sole purview of the Scriptures. Let me quote this Heath Lambert *Theses* from last week’s post.

#22. To affirm the authority and sufficiency of Scripture for counseling is to affirm the love and wisdom of God in giving his people what they need for life’s problems because most Christians throughout history and in most places in the world today have no access to secular therapy, but all Christians have had access to the Word of God.

Here is what is missing from this thinking. The brain is an organ, something I know all to well, having walked my daughter through a malignant brain tumor.That tumor ate away part of her brain. If you could have spent one day with me in the neuro-oncology unit of Dallas Children’s Hospital, you would have seen children who had profound limitations and personality changes due to their disease process. Yet, Lambert and Piper would have us believe that all that is needed is some contemplation on Scripture and just getting our morals and ethics in a line and all will be well.

Depression, anxiety, bipolar disease, schizophrenia, etc are not just simple *misunderstandings* of Scripture, fixed by meditating on the right verses. The brain is an organ which can be harmed, right? II sent the following message to Dr Throckmorton.

I was wondering if you had a resource to help me discuss the problem with drawing a hard line between the mind (psychological) and the brain (organic?) I am discussing some issues in the Biblical Counseling Movement. Their leaders sharply differentiate between mind and brain(biological). They claim the mind is totally the purview of the Bible while the physical is not.

He is in the process of doing some research in this area but made this point which is not only relevant but thought-provoking.

Where does mind come from if not from brain? What causes dementia if it isn’t deterioration of brain? Where does the consciousness of a dementia patient go?

Well, what are the answers? I don’t think that looking at God’s beauty is the answer to these profoundly difficult questions. No, the Scripture does NOT provide answers for everything that affects the brain, just like it does not give answers on how to treat a brain tumor.

Heath Lambert’s theses lack a depth of understanding which reflects itself in the sadly lacking training of those who ACBC claims are *competent to counsel.*

Heath Lambert was seriously abused as a child and claimed the gospel healed him when he was 14.

I think Heath Lambert’s own story of being abused as a child will help to explain his simplistic approach to mental health competency. His story moved me deeply because my own foster grandson’s early life is eerily identical to Lambert’s. My heart goes out to Lambert as he seeks to make sense of what happened to him, both in his early life and after he was saved by the gospel. However, his conclusions could be problematic to those, like my foster grandson, who did not “get the gospel cure.”

Special thanks go out to DZ, a reader who often shares interesting information with us.

Heath Lambert’s Story of Abuse from ACBC on Vimeo.

Like Lambert, Sam (not his real name) grew up in an abusive home with multiple children from different fathers. There was addiction and there was physical and sexual abuse. Sam used to run outside in the dead of winter, hiding behind bushes, along with his siblings, to avoid the abuse. He, too, often had to forage for his food. Eventually he, along with his siblings, were removed from the home and were scattered between numerous foster homes. There were too many kids with wildly diverse ages.

He entered the home of my daughter and her husband who are experienced foster parents. He was loved. He had stability, good food, and his education was carefully looked after. He got caught up in school and even began to excel at some subjects. He had medical care, psychiatric care, and in home counseling. Most of all, he too heard the gospel as well was saw it lived out for a couple of years. I will never forget the time he stayed at my house and, as I was praying with him, he pointed at a picture of an angel over his bed and said “I used to talk to Jesus when my father was hurting me.” It was all I could do to get out of the room before he saw me crying.

His story has not been one of “hear the gospel” and the path is clear. He continued to experience much pain and acted out that pain in difficult ways.  As those who knew him best said, “He was broken.” In spite of intense therapy, love, commitment, and the gospel, he has been rehospitalized in a long term care, residential program. He is still loved by his foster mom and dad but his future is uncertain and our hearts break.

My daughter and I had a good talk this week. She talked about how some kids are born with a resilient spirit. They can go through long term abuse and somehow make it out and flourish. Others do not. When I discussed the 95 Theses of Biblical coursing, she shook her head. It isn’t that simple.

Here is a paper put out by the NIH. Resilience in child maltreatment victims: a conceptual exploration.

While many child maltreatment victims suffer serious negative emotional sequelae, others do surprisingly well. Resilience in children is a relative concept which can change over time and is affected by environment and genetics. Resilience is fostered by protective factors which ameliorate or alter a child’s response to the hazards of maltreatment that usually predispose to maladaptive outcome. Personal characteristics or skills that may foster resilience include (1) rapid responsivity to danger; (2) precocious maturity; (3) dissociation of affect; (4) information seeking; (5) formation and utilization of relationships for survival; (6) positive projective anticipation; (7) decisive risk taking; (8) the conviction of being loved; (9) idealization of an aggressor’s competence; (10) cognitive restructuring of painful experiences; (11) altruism; and (12) optimism and hope. There are also generic life circumstances, such as having access to good health, educational, and social welfare services, that foster resilience in children regardless of the specific nature of the stressor.

Sadly, since the BCM does not believe that their spiritual methods for solving complex mental health scenarios should be studied, since “you can’t put a soul into a test tube,” one cannot even begin to assess their ability to deal with such painful situations. Given the woeful lack of BCM training, I believe that it is dangerous to put anyone who has gone through serious trauma into the hands of such “counselors.”

So I have a lot of questions. I would love to hear your answers.