A person who has been punished is not less inclined to behave in a given way; at best, he learns how to avoid punishment.- B. F. Skinner link

(Think about this quote and how it could apply to church discipline.) 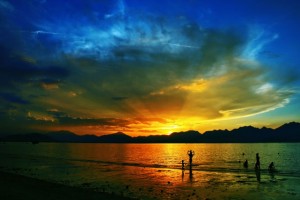 I live about 5 miles from Southeastern Baptist Theological Seminary. It is a seminary which, in most respects, marches lockstep with Southern Baptist Theological Seminary. This weekend 9Marks, represented by Jonathan Leeman and Mark Dever, are participating in the 7th annual 9Marks conference at the seminary. That, in itself, should help you to understand where this seminary stands in terms of theology and affiliation.

Although Jonathan Leeman kindly invited me to attend this conference, fearing that I might be the subject of a practical demonstration on discipline, I promptly headed to Florida to collect sea shells. This should irritate a number of members of this conference who, as followers of John Piper, would never waste their lives on such silliness when there are so many people to discipline and so little time to do so.

However, one can watch the live streaming of the conference. Most likely all of these discussions will be archived at the SEBTS website. They do have one member of the dude-bro contingent who, wearing a knitted cap and slouching, looks like a guy who could get the boys to show how shunning is really done in their neighborhood.

There is no question that we are getting through to the church discipline crowd since they are planning to discuss the wrong way to discipline.The Village Church treatment of Karen Hinkley has a number of people beginning to question the judgment of this gospel™ discipline crowd.

A couple days ago, probably in preparation for this conference, Jonathan Leeman posted 22 Mistakes Pastors Make in Practicing Church Discipline. Read all of the 22 mistakes he lists. Here are a few that I want to concentrate on so that I can get back to meaningful shell collection.

4. They fail to teach new members as they enter the church about the possibility of church discipline, and that preemptive resignations don’t work.

5. They fail to ensure that the church’s public documents (bylaws, constitution, articles of incorporation, etc.) address the procedures of church discipline, thereby exposing the church to legal risk.

10. They treat the processes of church discipline entirely as a legal process with little consideration for shepherding the unrepentant individual’s heart.

12. They forget that they too live by the gospel’s provision of mercy, and therefore prosecute the discipline from a posture of self-righteousness. Other mistakes follow from this wrong posture, such as an overly severe tone and standoffishness.

13. They fail to truly love the sinner . . . by not begging the Lord for his or her repentance.

15. They fail to properly instruct the congregation on how to interact with the unrepentant sinner, such as how to relate to him or her in social situations and how to pursue his or her repentance.

17. They put the responsibility for leading the discipline process entirely on the shoulders of one man, the senior pastor, thereby tempting individuals in the church to accuse the senior pastor of being personally vindictive.

18. They fail to have sufficient elder involvement in the congregation’s life, such that the elders are unaware of the state of the sheep. This failure of formative discipline will inevitably weaken the church’s ability to do corrective discipline well.

20. They allow the congregation to approach a case of discipline with a wrongful spirit of retribution, rather than with the loving desire to warn the unrepentant sinner about God’s ultimate retribution to come.

Here are some thoughts based on the above.

Most churches we deal with on this blog do mention church discipline in their membership guidelines, but they do not define what they will discipline. This is the heart of the problem.

The real problem is that they do not define what acts will lead to church discipline or they do not allow for flexibility when the inevitable exception arises. That is how abuse begins.

Todd Wilhelm, a former member of 9Marks (John Folmar) UCCDubai, had signed the membership contract which stated he would need to join another church as soon as he left UCCD. However, Todd Wilhelm objected to the bookstore that was selling CJ Mahaney books. They would not stop promoting Mahaney's books, so he resigned as a matter of conscience. Todd wanted to take his time in joining another church. This was not allowed and he was added to the *care list* which means he was headed for discipline.

This, frankly, is nuts but they would not bend. When he joined, he had no idea how kooky the process could be. (More on this shortly.)

He claims that preemptive resignation does not work.

Once again, they are walking on shaky legal ground here. US law allows one to resign from a voluntary organization. The Karen Hinkley debacle shows how vindictive this policy can be. She resigned, and The Village Church claimed she could not do so since she was under, get this, retroactive church discipline. TVC could have been subjected to a serious lawsuit, but Karen was kind and allowed the apology to stand.

Once again, they add insult to injury. They can abusively apply church discipline and then they attempt to prevent the abused person from leaving. Abuse upon abuse. This is silly. Let them go.

Wrong. I have read The Village Church's church discipline documents. Those documents were inadequate to deal with their foolish pursuit of discipline against Karen. We received a number of calls from lawyers who would have loved to defend Karen, pro bono, in a lawsuit against TVC.  Also, continuing to discuss a member who has resigned in public meetings, involving potentially thousands of members, is both dangerous and foolish when it comes to the law.

Instruct members that loving the sinner means begging God for their repentance.

Really? Even when the discipline is poorly defined and inequitably applied? Karen dealt with gospel™ people who reminded her that Hosea was married to an adulterer so staying in her marriage to the pedophile was justified. They told her she should repent and were praying that she would. However, the whole thing was bogus from the beginning.

Failure to instruct the congregation on how to deal with the disciplined member.

TWW will be writing a story of another 9Marks wannabe church which clearly instructed their church on how to shun a disciplined church member, leading to that person's inability to provide for the family. They also allowed certain rumors to be spread throughout the church which were untrue. Can you imagine a hot dog lawyer looking at this church?

They fail to invite disciplined people to continuing to attend the church.

This one is confusing, especially in light of the allowance for the shunning of the supposedly unrepentant person. Can you imagine going into a church which has disciplined you and is now shunning you? Cold, really cold…(Come to EChurch instead!!)

The senior pastor is viewed as vindictive when discipline goes badly. He needs to involve others.

Unfortunately, the buck must stop somewhere. In the end, it is in the lead pastor's lap. Matt Chandler realized this fact. When it comes to Todd Wilhelm's situation, most people will blame the senior pastor. Sure, one can involve others. However, most people recognize that the senior pastor almost always gets his way. He is either the leader and the one who takes the blame or he is not the leader. He can't have it both ways.

Here's the deal. When does formative discipline become corrective discipline, and how is that line crossed? Once again, I believe that a lack of specifics will lead to more and more incidents like The Village Church/Karen Hinkley and UCC Dubai/Todd Wilhelm.

Leaders need to instruct the members that this is not about retribution here but the divine retribution to come.

The word, "love" is being applied more and mote to mean church discipline. However, we are seeing more and more instances in which church discipline is both unloving and ridiculous. Not only are Christian bloggers picking up on this, but so are other forms of media. We are beginning to look ridiculous with some of these stories.

One other quick note of a theological nature. If someone sins badly but is really a Christian and they die, do they receive divine retribution? Do we all face retribution when we go to heaven and we are Christians?

Accurate case studies could be one of the solutions

Jonathan Leeman and I exchanged some tweets a couple of weeks ago. I told him that I will continue to be the loyal opposition to his current mandates on church discipline. I see it moving more and more into ridiculous directions.

I discussed my concern with the way John Folmar, BFF of Mark Dever, applied church discipline in Todd Wilhelm's situation. Leeman answered with the infamous line that Matt Chandler tried in the beginning of the Karen Hinkley saga.

You don't know the whole story.

Leeman appealed to confidentiality. So I contacted Todd and told Leeman that Todd would sign a release to allow Folmar to discuss this situation in public.

Leeman was not amused. He asked me who I would appoint to adjudicate the conversation. My intentions have nothing to do with a court trial. He didn't understand what I was getting at. Both Deb and I hold MBAs. Case studies of companies, both failures and successes, are an integral part of the MBA curriculum. By reading about all of the input in a particular decision, one can begin to understand how certain outcomes came into being.

The problem with today's churches is that many of them are fearful of taking a good, hard look at their decisions and sharing their experience with the wider Body of Christ.

What Leeman does not understand is this. The more open and honest we can be with our failures, the greater the possibility that we can justly apply actions in church discipline situations. Todd Wilhelm has given permission to have his case looked at by the public. 9Marks should do so. In fact, 9Marks should do this in all of their church discipline decisions in which the disciplined member is willing to have the books opened up to the light.

Until the rules of the game are defined prospectively and there is a willingness of the churches to assess individual cases of discipline, I will not trust or recommend joining a church that "believes in church discipline".