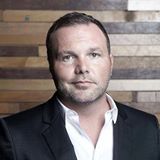 He's B-A-C-K!!!  In recent days there had been much speculation that Mark Driscoll would be preaching at Gold Creek Community Church.  Warren Throckmorton tipped us off last Thursday with this:

Last Sunday, a public announcement was made about a guest speaker who has been called one of the top 25 most popular preachers. The pastor also negatively referred to “sour milk” Christians as those who might not want to see Mr. Popular in the pulpit.

When Throckmorton phoned Gold Creek Community Church for confirmation, he was told they would not reveal the identity of the guest speaker.  He didn't have to wait long to find out.  Mark Driscoll preached during all three services Sunday morning, and the seattle pi reported that he received a standing ovation (see below).

Mark Driscoll hardly caught his breath after quitting as lead pastor at Mars Hill Church, as the Seattle-based mega church imploded in multiple scandals, before launching his own web site and once more appearing at evangelical conferences.

On Sunday, Driscoll delivered his first Seattle-area reappearance since last August at the big, box-like Gold Creek Community Church in Mill Creek.  He was  greeted with a standing ovation, with more than 100 people lining up to greet him after the 9 a.m. service.

According to the seattle pi,

lead pastor Dan Kellogg brought on Driscoll with the words:  “He’s in the middle of re-purposing his life.”  Kellogg claimed Driscoll was “unfairly treated by former staff and the media,” and exclaimed:  “He’s baptized 10,000 people who found Christ.”

So Mark Driscoll is playing the victim card…  How very predictable!  Those who have been hurt by Driscoll are not being fooled.  In fact, when some of them caught wind of Driscoll's possible appearance at Gold Creek Community Church, they planned a protest which was announced on Warren Throckmorton's website.  Here is a screen shot of what Throckmorton posted: 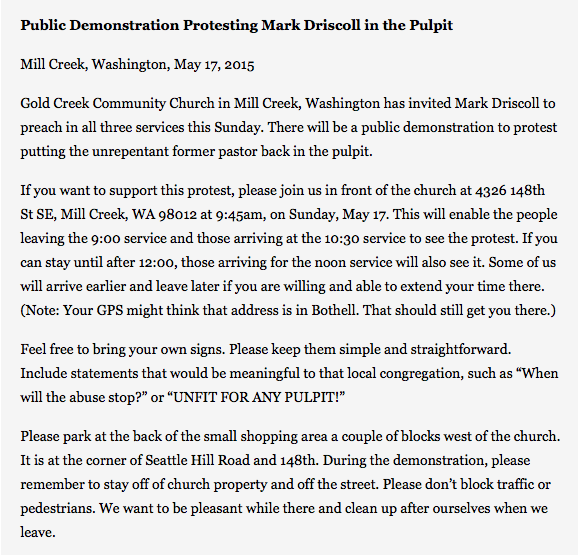 Several news sources revealed that there were a dozen or so protesters outside the Gold Creek Community Church accusing Driscoll of relaunching his ministry without repenting of his conduct and addressing the problems which led to its collapse.

Gold Creek Community Church is non-denominational according to its website.  It is located in Mill Creek, Washington near downtown Seattle.

Mark Driscoll made an appearance earlier this month at the Thrive Conference.  His thirty-four minute talk can be accessed here.

Driscoll made a public appearance at the Thrive Conference at Bayside Church in California where he spoke about how his family has suffered over the past several months and how he's relying on God to help him forgive those who have wronged him, according to Gospel Herald.

"I don't want to take this opportunity to talk about me — I want spend this time to serve you," he was quoted as telling attendees at the conference. "When sin happens, someone has to pay. Forgiveness is where the offended pays. As shepherds, we can sometimes preach a message of forgiveness without practicing it."

In his resignation letter, Driscoll admitted that "aspects of my personality and leadership style, had proven to be divisive within the Mars Hill context" and that he was resigning because he did not want "to be the source of anything that might detract from our church's mission to lead people to a personal and growing relationship with Jesus Christ."

The Mars Hill Board of Overseers' statement on his resignation affirmed that although "pastor Mark has, at times, been guilty of arrogance, responding to conflict with a quick temper and harsh speech, and leading the staff and elders in a domineering manner," they did not find cause for him "to be disqualified from pastoral ministry."

Dee and I first became acquainted with Mark Driscoll's ministry in February 2009 when he came to our area to speak at several venues — one being my daughter's college.  When I had the opportunity to hear this message online, I knew right away that there was something terribly off about this guy.  The campus ministry must have detected it as well because Mark's message was quickly removed from the website.

Then there was the Song of Solomon debacle that garnered much attention, not to mention the firing of two beloved Mars Hill elders, Bent Meyer and Paul Petry.  Driscoll was riding high as more and more bodies were piling up behind the Mars Hill bus.  Then we had the Real Marriage book and promotion tour, followed by charges of extensive plagiarism and the payment of $200,000 to Result Source to ensure Real Marriage would be on the New York Times bestseller list (for one week!).  These serious problems and others snowballed and led to the resignation of Mark Driscoll as pastor of Mars Hill Church, and the inevitable closure of all church locations.

It was stunning to hear Dan Kellogg's defense of Mark Driscoll in that video (starting at the 3 minute mark).  To the pastors and congregants of Gold Creek Community Church, we pray God convicts you of turning a blind eye to the destruction Mark Driscoll singlehandedly caused at what used to be known as Mars Hill Church.

We continue to stand with those who were victimized by Mark Driscoll.  May their faith and lives be restored in God's perfect time.