“I wish it need not have happened in my time," said Frodo.
"So do I," said Gandalf, "and so do all who live to see such times. But that is not for them to decide. All we have to decide is what to do with the time that is given us.” ― J.R.R. Tolkien, The Fellowship of the Ring link 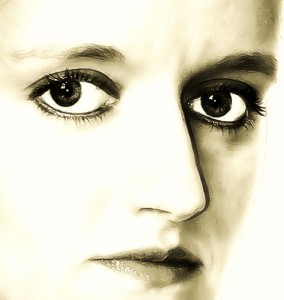 Owen Strachan: Bruce Jenner is transitioning because of male inferiority

In  Desperately Seeking Womanhood: Bruce Jenner & Masculine Inferiority, Owen Strachan puts forth the theory that Bruce Jenner is seeking to become a woman because feminists have driven him to it. His post purports a theory that no one else is proposing, except Calvinistas. He says it all started in Genesis 3:1-7 and Genesis 3:16

Now the serpent was more crafty than any of the wild animals the Lord God had made. He said to the woman, “Did God really say, ‘You must not eat from any tree in the garden’?”

4 “You will not certainly die,” the serpent said to the woman. 5 “For God knows that when you eat from it your eyes will be opened, and you will be like God, knowing good and evil.”

6 When the woman saw that the fruit of the tree was good for food and pleasing to the eye, and also desirable for gaining wisdom, she took some and ate it. She also gave some to her husband, who was with her, and he ate it.

7 Then the eyes of both of them were opened, and they realized they were naked; so they sewed fig leaves together and made coverings for themselves.

…16 To the woman he said,“I will make your pains in childbearing very severe; with painful labor you will give birth to children. Your desire will be for your husband, and he will rule over you.”

Without blinking an eye, Strachan goes on to interpret this passage as the beginning of women usurping the role of men. Here he is writing for Answers in Genesis.

Adam was called to exercise dominion over animals, and yet an animal mastered him in the Fall. Adam was the head of his wife, but he relinquished his headship when he allowed Satan to tempt his wife, and when he let his wife lead him to eat the forbidden fruit. While she was duped about the consequences of her rebellion, she knowingly led her husband into this sin of disobedience.

…The sexes were also put in competition, and Eve, the Lord said, would now have a desire for her husband. This word is also used in Genesis 4:7, where God tells Cain that sin’s desire is for him, which means that evil is seeking to master and rule over him. So the woman will now seek to lead and dominate her husband. When we listen to Satan, pain and brokenness follow, and the gender roles laid out for us in Scripture are undermined and attacked.

With these limited passages, Strachan *proves* that the Bible says that women are now engaged in a battle to dominate men. Satan made sure of it because Satan apparently hates gender roles…

We feel great compassion for those who are suffering this trial. These are the effects of the fall before our very eyes. Satan himself targeted Eve and encouraged her to own a role that was not hers (Gen. 3:1-7). The outcome of the curse is further hostility and confusion between the sexes (Gen. 3:16). The very root of the death of the human race, then, was a Satanic disruption of God’s plan for men and women. Satan promised Eve that she would be like God. In other words, he offered her a false gospel, one that creates untold pain and harm.

In the article on Jenner, Strachan has this to say:

Satan himself targeted Eve and encouraged her to own a role that was not hers (Gen. 3:1-7). The outcome of the curse is further hostility and confusion between the sexes (Gen. 3:16). The very root of the death of the human race, then, was a Satanic disruption of God’s plan for men and women.

It is important to be aware that there is significant disagreement, even within complementarianism, with this interpretation of Genesis 3. Wendy Alsup, a complementarian, wrote on A New Wave of Complementarianism. In this she takes on the view that seems to be expressed by Strachan.

Strachan moves into uncharted waters and blames feminists for Jenner's wish to transition. He forcefully makes the following statement.

Proofs and a study

He then offers *proof.* Well, sort of…

There is a narrative at play here that is bigger than a mere desire to change the body. Manhood has been demeaned as an institution for decades now. Men are seen as inferior to women, less mature than women, ignoble, stupid, less relationally skilled, and less evolved. In such a context, it begins to make sense for men to want to be women. The church cannot affirm this behavior based on unbiblical thinking–not by a country mile.

Then he quotes a study.

Some limited research suggests that there are more than three times as many male-to-female transgender people as the reverse. That is most assuredly an important–but undiscussed–statistic. Something is happening with modern men, and few seem to be noticing it.

Here is a link to the original study in the Netherlands.

Note that the starting data points were from 1975 and the last was collected in 1992. This study is 23 years. It is safe to say that views on transitioning, gender dysphoria, etc. have changed in the culture at large, becoming far more accepted. This study in no way *proves* that more men are becoming women as opposed to women becoming men. And, even if it were true, it does not prove that feminism and an incorrect understanding of Genesis 3 is the reason of this change. There must be a comprehensive study on biological and psychological factors that may be present in gender dysphoria before blaming this all on those darn women.

The data were collected from 1975 to the end of 1992. Over 95% of the Dutch transsexuals have been treated at the study center. Between 1975 and 1984 the annual number of female-to-male transsexuals increased, stabilizing thereafter. In the male-to-female transsexuals this trend continued up to 1989, declining slightly thereafter.

In fact, if Strachan had done his research, he would have discovered that Jenner felt like a woman from the age of 5. Bruce Jenner was born in 1949, and had these feelings in 1954, hardly the age of feminism.

Start focusing on the men

Strachan, continuing on in the theme of feminists being to blame for Jenner's transition, makes some suggestions and throws in his opinion on tattoos while he is at it. (Folks, I am having trouble playing this straight.) I guess women shouldn't  invest in their sons. (Darn undercover feminist women are going to turn all the boys into women??) Yep-Christianity needs a masculine feel. Where have we heard that before? John Piper, perhaps?

This sort of thinking is becoming the status quo in many circles.

Women are to be helpers to men.

Scot McKnight quoted a question and answer from a blog at Southern Baptist Theological Seminary. The writer, a woman, appears to believe that even single women must find men to help.

Question 1: As a young woman, if you have a desire to make disciples outside of America, does it mean you are called specifically to overseas missions?

Maybe, but not always. A desire should not be misunderstood as a calling. It may simply be a feeling. This feeling may be from God, or it may be an impulse of your own heart. What is clear is what is revealed in God’s Word.  Before looking at your specific calling, let’s look at God’s calling for women in general.

According to God’s Word, God’s highest calling for most women is being a wife and mom (Genesis 2:18; Titus 2:4). As a wife, I am designed to help my husband be the best man he can be as he lives out his calling to make disciples. So this means that if I am married, I can be confident that I am following God’s calling when I support my husband in his calling.

If you are called to singleness, you are still created to be a helper in a general sense to the body of Christ, but you are also able to maximize your giftedness in a unique, devoted way (1 Cor 7:32-35). So if you are single, I would encourage you to find a ministry that you love with leaders that you can work under and help. Then devote yourself to helping them be the best they can be as they further the kingdom.

[She then explores singleness and missionary work and you can read the rest of the piece at the link above.]

Complementarianism is crucial to discipleship, the gospel, and all sorts of other things.

Jonathan Leeman or 9 Marks had much to say on this subject.

…When a church holds up models of biblical masculinity and femininity, therefore, it makes the gospel easier to comprehend.

…Without such models, the gospel is simply harder to explain, almost like the Bible translator who wants to a describe Jesus as the “lamb” of God in a jungle culture that’s never heard of a lamb or a sacrifice. Is it any surprise that the devil, who hates the gospel, would want to homogenize men and women as well, thereby blurring one set of images for picturing the gospel?

…Instead of a church filled with passive men, who quickly rush their families to the car when the service ends, imagine a church full of men charging ahead to promote the ministry of the Word. Imagine the men doing this in the pulpit, in the music ministry, in the children’s ministry, in after-church events, in evangelistic work, in caring for outsiders. I dare say, that would be a church in which it would be easier for a godly woman to be a godly woman.

…In other words, women are often stuck having to take initiative and leadership in churches because men fail to do so. But to the extent men work hard in the garden of the church, sowing the seed and tilling the dirt, Christian women have good work to do by helping those men. They do this by following the leadership of worthy men, by extending the Word’s work into areas in which it can be more difficult for men to travel, as in the lives of children or younger women.

To me, this whole thing boils down to a few points.

No wonder Christians are becoming wary of signing membership contracts. One things is for certain. I would never sign one of those things if any of these men were in leadership. I would be disciplined on Day 1. Also, did Strachan ever apply the gender divide from the other point of view? Maybe he, along with his buddies, are the one who are causing the divide in gender relationships…