"This is the Horrible place [where] I spent 15 months as a teenager. It is a cult and my parents did not know….HE ABUSED US TEENAGE GIRLS, and screwed up our minds, and broke our spirits…There was no love. We are all still healing 20-30 yrs later."

The Lambs of Hephzibah House 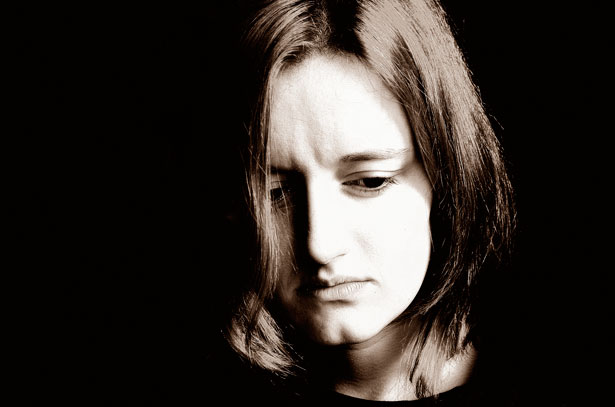 We are continuing our focus on girls' homes affiliated with Independent Fundamental Baptist Churches in the United States.  In this post we will be taking a look at a girls' home that continues to operate – Hephzibah House – located in Warsaw, Indiana.  It was established around 44 years ago (in 1971).  The screen shot below includes information currently provided on the website. 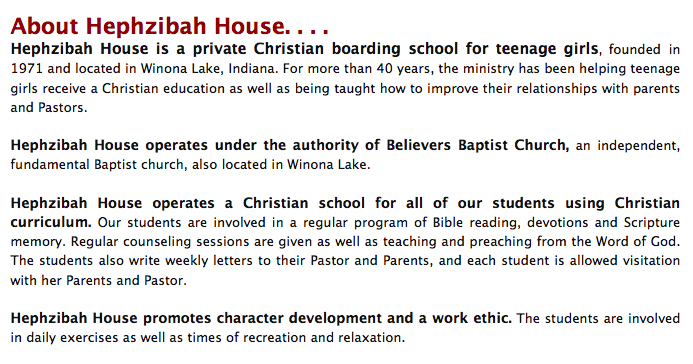 Hephzibah House may sound like a wholesome environment for teenage girls based on the information provided; however, individuals have come forward claiming it was anything but that.  A number of years ago, a group of Hephzibah House 'survivors' began speaking out about their horrific experiences while living there.  One very concerned woman who brought attention to these alleged abuses was Jeri Massi, who wrote Schizophrenic Christianity.  This book, which was published in 2008, denounced corruption within Christian Fundamentalism that has brought great harm, particularly to children.  Dee has mentioned Schizophrenic Christianity it in several of her posts, and I am in the process of reading it. You can find Massi's book, along with a summary, over at Amazon.  NOTE:  This is an unsolicited, unpaid endorsement.

One of the blessings of blogging is that we get to know so many wonderful people, and not just through exchanges on the internet.  Several years ago we had a wonderful lunch with Jeri Massi, who happens to be a HUGE Dr. Who fan.  She is a such a blessing to the downtrodden in the Independent Fundamental Baptist movement.

This is stunningly well done. Everyone…should listen. How can you judge without HEARING the witnesses? – Husband of a Hephzibah House Surviror, Minnesota

Gary Tuchman, who is featured in this video clip, interviewed some of the same former residents who shared their testimonies with Jeri.

With more and more people speaking out about Hephzibah House and other abusive girls' homes, survivors became more vocal about what they experienced.   Some even staged a protest, as the following video shows.

The legislation mentioned in this clip passed in the State House but not in the Senate.  🙁  However, the good news is that this information is finally getting out to an unsuspecting public.

Someone who blogs at Chucklestravels is also trying to educate the public about Hephzibah House.  Here is just some of the information published on that website:

The Hephzibah House is a Winona Lake, Indiana boarding school for troubled teenage girls usually committed by their parents and recommended by Baptist pastors. The school/home does not fit any category for a state license. A private religious school does not require state certification. In other words, there’s not much the state government can do about the abuse of former members unless the laws are changed.  As mentioned in Tuchman’s interview, according to current Indiana law there needs to be a complaint while a student is a current student.  Girls rarely, if ever leave the compound the entire time they are at Hephzibah House.  Phone calls to the girls parents are listened in on by a staff member on an extension.  The girls are told they can only talk about positives at Hephzibah House on these calls.  Letters home to parents are censored.  If the letter does not pass the censor, the letter is given back to the girl to be re-written.

What is written above, are not isolated incidents.  The former Hephzibah House ladies have been telling horrifying, very similar accounts for nearly 4 decades.

In the wake of all this criticism, the three staff members of Hepzibah House — Ronald Williams (the founder), Donald Williams (son of the founder), and David Halyaman sent out this letter, presumably to the supporters of girls' home.  Please take the time to click on the link and read the letter.  In case you'd like to read the bios of these three men, they can be found here.   Perhaps not surprisingly, the Hephzibah House website also includes Rebuttals which attempt to discredit the critics.

With regard to the claims of spankings by the survivors who have come forward, there is an open admittance on the website that they did, in fact, take place. See the following screen shot from the site.

If you look at the other allegations against Hephzibah House, the ones about keeping track of bodily functions seems rather odd… (these are included in the list of Rebuttals linked above).  And in the FAQ section on the website, Hephzibah House leaders respond to these questions:

And as expected, the website includes Testimonies that endorse the work being done at Hephzibah House.

One thing is for certain, the changes that have occurred at this Indiana girls' home would not have occurred had survivors not come forward with their own testimonies.  In the wake of the information shared by these whistleblowers, we have one simple question, why would anyone send their child to one of these homes?  Surely there is another alternative…