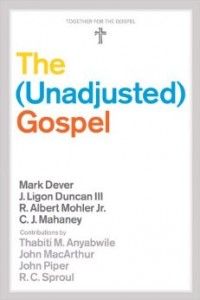 Yesterday I spoke about the close ties between big business and ministry. Financial ties should be disclosed in order to separate out business and ministry statements. Refer to yesterday's post if you do not see the correlation. Thanks to a sharp eyed "Eagle," I found out about a new book that is to be published in April 2014 by Crossway. The full title of this word is The (Unadjusted) Gospel (Together for the Gospel). The authors are (in same order as on the book cover)

Here is part of the summary at Amazon:

the contributors draw on their extensive ministry experience to offer readers a thoughtful plea for safeguarding the message of the gospel in the midst of our pluralistic world.

For once, I am not going to pontificate except to say that one of my points in yesterday's post defintely has some play. I shall leave the commentary on this book, published by Crossway, in the hands of our able readers.