"In fact, they [sheep] may well be just about the dumbest animals in the world." 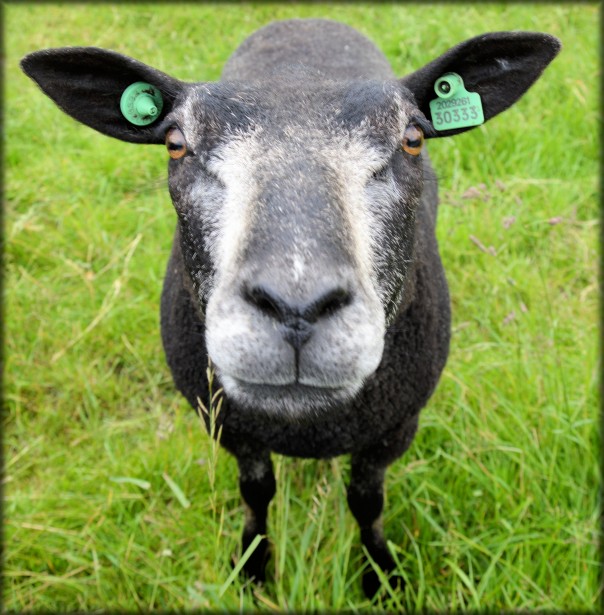 Here we go again…  Another Calvinista discussing sheep and how utterly dumb they are!

In a recent post Tim Challies berated the poor sheep yet again (explanation to follow) by writing:

"Why sheep? Why not cheetahs or wolves or ligers [tigers, perhaps?] or another animal with a bit of flair, a bit of class? But the Bible tells us often that we are sheep. We are sheep and God is a shepherd. That sheep/shepherd word picture is at the heart of the best-loved Psalm—Psalm 23. I spent some time with that psalm lately and tried to gain a better appreciation of why God saw fit to tell us we are sheep.

I will admit I am not the world’s foremost expert on sheep. I grew up in the city and even now live in an area of town that explicitly forbids owning livestock. In place of first-hand knowledge, I spent some time reading about sheep. It was funny. And kind of humbling."

Hmmm…  Challies admits that he knows nothing first-hand about sheep; yet he pontificates about how DUMB, DIRECTIONLESS, AND DEFENSELESS he believes they are.

Tim Challies certainly thinks so.  Here's how he illustrates his point:

"This is a real news story that aptly tells us the first reason sheep need a shepherd: because sheep are dumb.

Hundreds of sheep followed their leader off a cliff in eastern Turkey, plunging to their deaths this week while shepherds looked on in dismay. Four hundred sheep fell 15 metres to their deaths in a ravine in Van province near Iran but broke the fall of another 1,100 animals who survived. Shepherds from a nearby village neglected the flock while eating breakfast, leaving the sheep to roam free. The loss to local farmers was estimated at $74,000.

One sheep wandered off a cliff and 1,499 others just followed along. Can you picture it? 1,500 sheep, each walking off a cliff, one after the other. Soon they were piled so deep that the ones at the bottom were crushed to death and the ones on top were lying on a big downy-soft pillow. It is completely absurd and tells us one important fact about sheep and the first reason sheep absolutely need a shepherd: they are not the smartest animals in the world. In fact, they may well be just about the dumbest animals in the world."

In case you aren't aware, Tim Challies has gotten a lot of mileage out of the news story cited above.   He first mentioned it in a March 2006 post entitled It's Not a Compliment.  Then he recycled it in December 2009.  The title of that post was Dumb as Sheep.

Now let's take a look at a 'dumb' sheep…

Tim Challies continues putting down sheep with a contention that could easily be attributed to Mark Dever / 9 Marks.  In fact, maybe that's where the idea originated.  He explains:

"Sheep are prone to wander. Even if you put them in an absolutely perfect environment…sooner or later they will just wander off. If a shepherd doesn’t manage them, if he doesn’t micromanage them and keep them under constant surveillance, they’ll wander off and be lost."

Jamieson concluded with this admonition:

"KEEP AN EYE ON THE BACK DOOR

So pastors, just as you pay careful attention to the front door of your church, keep a close eye on the back door, too. Make sure that the sheep can’t simply open the gate themselves and disappear from sight. Refuse to allow people to resign into thin air, both for the sake of your church’s witness to the gospel and for the good of every single sheep—especially those who tend to wander off."

Maybe Bobby Jamieson knows what he's talking about after all…  Take a look.

This sheep is quite the escape artist! I wonder if he's teaching this trick to the rest of the flock. 🙂

On this third point, Challies explains:

"Sheep can’t fight, they can’t run away, and they can’t scare away. So what does a sheep do when danger comes? It flocks. When a bear approaches, the sheep will gather with others in a pack and run in circles in complete panic, just hoping that the bear will choose someone else. Without a shepherd to protect them, they’ll be picked off and eaten one by one."

Robin, who commented under the Challies post, disagrees with his second-hand assessment by writing:

"I realize and appreciate your larger point. We ARE sheep in God's eyes and the analogy/metaphor is a very good one. But we have raised sheep for 17 years and there are a few things worth pointing out, that perhaps may prove to be a useful metaphor also, things that are not widely known. A ewe will protect her lamb. Our sheep are a very large breed and when a ewe with a lamb thought our golden was going after her baby (he wasn't), she relentlessly rammed him till we had to get him away before he was hurt. Sheep will also stomp if threatened; not a great defense, but they don't necessarily just run. A ram can kill someone. It happens from time to time; never turn your back and a horned one is really touchy. Sheep may not be smart but are equipped with strategies to survive. Some, usually becomes the leader, are pretty intelligent, seemingly, and can figure out how to open gates with their lips. Some also have very good memories and are affectionate; a bottle baby my daughter raised is now 3 and still runs to my daughter when she calls and is not all that comfortable being a sheep, although her instincts kicked in when she had her own lambs. Caveat: we have farm sheep, not nomadic like the Bible is talking about. Nevertheless, their flocking instinct is remarkable. So I will give the sheep off the cliff story that. However, it sounds like they didn't have a good dog, which is necessary with those kinds of numbers.

Sorry. This is a very good piece and I fully agree that we are sheep and need a Shepherd. But I thought I'd stick up for them a little in the practical sense…"

Here is a clip of a fearless sheep.

In all seriousness, the Calvinistas really need to STOP with the dumb sheep metaphor.  Analogies can be carried far beyond that which was intended.  When God utilized the sheep metaphor, He never used it to berate His children for being stupid.  He stressed by inspiration of the Holy Spirit that He is the loving shepherd who cares and protects His flock.

Why are the Neo-Cals going in this direction?  Is it because they believe we are so utterly depraved that we have to be constantly reminded how sinful and dumb we are? On the contrary, we are created in the image of God.  His emphasis doesn’t seem to be our wretchedness, much to the disagreement of the Calvinistas.  Christians have the Holy Spirit dwelling in them.

If the Calvinistas are intentionally using the dumb sheep metaphor, then it appears to us that the Shepherding Movement is being unleashed on unsuspecting victims once again.  Tragically, those who may be hurt are probably too young to remember the devastation that occurred with the original Shepherding Movement (1970s-1980s).  A few weeks after we began blogging, we wrote on this unbiblical practice (and the Fort Lauderdale Five who carried it out) in an attempt to warn our readers.  Here are two posts that we highly recommend:

In conclusion, we have just two words for the Calvinistas whenever they attempt to advance their dumb sheep metaphor…