It is not because angels are holier than men or devils that makes them angels, but because they do not expect holiness from one another, but from God only. William Blake link. 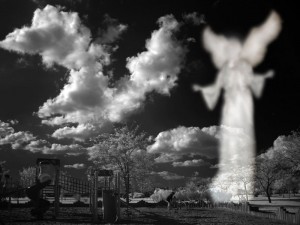 When Deb and I visited a Sovereign Grace Church around 5 years ago, we noticed that several women wore head coverings during  the church service. We had become acquainted with SGM through the SGM Survivors blog and were not terribly surprised.

Around the same time, we learned that Mrs. Doctor Dorothy Patterson wears a hat. In fact, we eventually wrote a post about her opinion on head coverings called Dorothy Patterson on Biblical Head Coverings. Here is an excerpt from the post.

So perhaps the Lord decided because my husband was going to be in a public position and because I was going to have to find every way I could to show that I wanted to stand under his authority – I have a slight independent streak, it’s very slight but some people have picked it up – and so perhaps in light of that the Lord just put in my heart a desire to wear hats. And it was a fashion reason actually in the beginning, but as I have looked at this passage again and again I do feel very comfortable in saying yes I’m happy with that application if it is a way of bearing testimony to those who cross my path that I did choose to marry and I do choose to stand under the authority of my husband.

One might be tempted to say that Mrs. Patterson is just an elderly lady who likes hats, so what's the big deal? TWW believes that gender roles are being elevated to primary doctrine. Such doctrine will include issues like men being in authority over women and men being the leader in the home. As these doctrines get pushed, we believe that issues, such as head coverings, which were relegated to the cultural trash heap, will make a comeback. It will be important for those who really, really believe these doctrines to make a public statement of their adherence. They might even get a speaking slot at the next conference!

The Bayly brothers like head coverings because it exemplifies a "real" woman.

On July 17, 2013 the Baylyblog published A Good Resource on Christian Headcovering in Worship here. Speaking about the fact that his wife, Mary, wears a head covering in church, Tim Bayly says:

Mary Lee and I began this practice and commend it to each of you who are married. It is a clear confession of the Christian faith to postmoderns who are so twisted by our culture that they find themselves most comfortable with femininity in men (doubting themselves, using hedge words and phrases, wearing jewelry, abdicating authority, shedding tears, being vain in their appearance) and masculinity in women (taking leadership and authority, working out, getting ripped, teaching men, playing soldier, playing cop, playing pastor, being brash).

What constitutes gender bending according to Bayly?

So, women who ignore their roles commit such gender sins of:

Men who ignore their roles commit such gender sins of:

According to the Bayly post, 20% of the women in their church wear head coverings. I pity the 80% who do not. Bayly then says:

Break out of your conformity to the androgynous patterns of our evil world. Be handsome and beautiful. Be man and wife. Take your manhood and womanhood to corporate worship this week and use them there to glorify God.

RC Sproul: The doctrinal leader in the head covering movement

So, is Tim Bayly coming up with this on his own? Of course not. He quotes RC Sproul as his evidence.

One blog, The Voice of One Crying Out in Suburbia link

I like a lot of what he (Sproul) has to say here and his wife Vespa wears a hat in the corporate gathering of the church. He points out that the revolt against women covering their heads corresponded with the general revolt against the headship of the husband in the family. Little wonder that as men abandoned their leadership in the home and church, women filled the vacuum and stopped covering their heads along with taking over leadership in the church and home.

The blog Modesty:The Forgotten Virtue link documents some other quotes by RC Sproul on the matter. Here are a couple.

Head Coverings Are Required  for Women: “One’s dress reflects the principles that one lives by . . . . even our exterior must conform to the order that God has established, especially in matters pertaining to public worship. The apostle makes the point that the veil [a.k.a. head covering], as a symbol of authority, is inconsistent with the position of the man, but it is required for women, who are subordinate to men.” (18 June 1996)

The Head Covering Is God’s Command: “While [Charles] Hodge says that women should conform to the ‘rules of decorum,’ it must be maintained that these rules, regarding the worship of God, are established by God Himself not by the whims of culture. It is proper for a woman to have a symbol of authority upon her head; what that symbol consists of does not matter, but the necessity of the symbol remains fixed even as the authority of man remains fixed. . . . As in all things regarding worship, we must strive to be conformed to God’s regulations in all things, no matter how seemingly insignificant.” (21 June 1996)

Not surprisingly, a blog called The Head Covering Movement has recently been launched. They quote directly from Sproul on their homepage

The wearing of fabric head coverings in worship was universally the practice of Christian women until the twentieth century. What happened? Did we suddenly find some biblical truth to which the saints for thousands of years were blind? Or were our biblical views of women gradually eroded by the modern feminist movement that has infiltrated the Church…? – R.C. Sproul

RC Sproul Jr gets in on the act

They quote from RC Sproul Jr on the subject as well.

Women must wear hats because of the angels!

Now, here is where it gets interesting. According Charles Spurgeon, women must cover their heads because of the angels!

The apostle says a woman is to have a covering because of the angels because the angels are present in the assembly and they mark every act of decorum.

A man ought not to cover his head,since he is the image and glory of God; but woman is the glory of man.  For man did not come from woman, but woman from man; neither was man created for woman, but woman for man. It is for this reason that a woman ought to have authority over her own head, because of the angels.

It is OK to build a doctrine on a "vague verse."

In a section on the head covering blog they wrote the Why Head Coverings? Reason #2 Angels link they say

Since this is a very short and vague verse, there’s no way we can know with absolute certainty what it means. However, there are many Scriptures about angels that I believe shed light on this passage. Through examining them we’re going to end up with two possible conclusions to explain this verse. Both conclusions could be right as they don’t contradict each other, but it may be only one that Paul had meant.

Here is where it gets rather bizarre.

They see enemies of God now worshiping because they’re forgiven and redeemed. They see Jews and Gentiles worshiping together as members of one another in unity. They see males and females worshiping together as equals. On top of all that through head coverings our women show all present that their position as a woman is also redeemed. No longer are they at war usurping and longing for the mans position of authority (Gen 3:16). Instead they’re content in the role God ordained for them in Genesis 2.

The men likewise through their bare heads communicate that they will exercise authority in their respective roles. However, no longer will it be through domineering (Gen 3:16) or being passive like the first Adam. Their position as a man is also redeemed.

The angels with their jaws dropped must cry out as they watch this, “behold the manifold wisdom of God!”

Women wear hats because the angels will be reporting on you to God.

Did you think that it was odd to read comments at SGM Survivors that Sovereign Grace Ministry care group leaders were to make reports to the pastors about the meetings? You ain't seen nothing yet!

So in summary, if God is primarily concerned with the angels benefit, then this reason means one or two things. It would be an appeal to not offend the angels by our disobedience or a command to accurately show them a picture of the created order. If on the other hand God is primarily concerned with our benefit, then this is a warning as a means of accountability. God would be graciously reminding us that the angels are watching us worship and bringing our prayers before Him (Rev 8:3-4). They will let Him know if we’re obeying this command or not.

Keep an eye out for the rise of the head covering movement. We predict it might become the latest trend to mark the really, really dedicated, gospel women.  Remember, the angels are watching and reporting…