"There are going to be a lot of people who are disappointed that I gave this book a positive review. That's kind of sad, isn't it?" 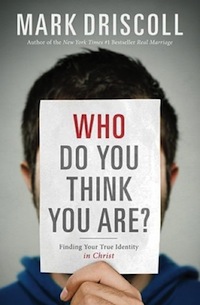 A few days ago Tim Challies posted a review of Driscoll's new book and gave it a thumbs up.  No surprise there…  Challies begins his review with these words:

"One of the great questions of life is the question of identity. Who am I? When faced with this question—a question we must all answer at one time or another—some respond with their vocation: I am a pastor or a police officer. Others respond with deep pain from the past: I am a victim of sexual assault or I am a drug addict. Others respond with their greatest success or most shameful failure. Yet none of these get right to the heart of the matter. These may be what we do or what we have done or what has been done to us, but none goes deep enough.

The Christian answer can and should and must be different. It is this, the matter of identity, that is at the heart of Mark Driscoll’s new book Who Do You Think You Are?. Driscoll says rightly that even as Christians 'we’re continually forgetting who we are in Christ and filling that void by placing our identity in pretty much anything else.' The question 'Who am I?' is 'far-reaching, belief-revealing, life-shaping and identity-forming. How you answer determines your identity and your testimony. Tragically, few people—even few Bible-believing, Jesus-loving Christians—rightly answer that question.' "

Then he describes how Driscoll writes like a pastor.  Here is how Challies explains the book's contents:

"Working his way through the book of Ephesians, Driscoll provides a long list of answers to this question of Who Am I?: I am in Christ, I am a saint, I am blessed, I am appreciated, I am saved, I am reconciled, I am afflicted, I am heard, I am gifted, I am new, I am forgiven, I am adopted, I am loved, I am rewarded, I am victorious. Each one is firmly grounded in Scripture. Each one flows from the good news of the gospel.

I am quite certain that I have read each one of Driscoll’s books, and I am confident that this one displays the greatest level of pastoral care and sensitivity. Driscoll is writing as a pastor and often illustrates his points by relating the stories of people in his church, describing how they came to find a new identity in Jesus Christ. He writes humbly and with carefully-chosen words, rarely turning far from the biblical text. He dedicates this book to his daughter and it is a book most fathers would be very glad to have their daughters read."

You see, that's the problem.  Time and time again, Mark Driscoll has demonstrated his incredible immaturity and inability to show 'pastoral care and sensitivity'.  Now that he has garnered so much criticism for his crass language, for firing two beloved Mars Hill elders, for consolidating power at his church, for his 'marriage' manual, for his pornovisions, and on and on and on, Driscoll is trying to change his bad boy image, and Calvinistas like Tim Challies are helping him do it.  Thankfully, there are those who are challenging him.  Here are two responses Challies received on his website.

"Exactly. Just because someone who is unqualified for the ministry finally writes a book that doesn't contain horrific perversion doesn't mean he is now qualified for the ministry. Just because Driscoll is a Calvinist doesn't mean he should get a pass on LITERALLY EVERYTHING else he does. He claims God gives him visions of people having sex. He says he married his wife because God audibly told him to. Same with his "ministry call." He encourages wives to get plastic surgery if it would make their husband more sexually satisfied. His church's government is horrible, and he has crafted it to be that way to give himself ultimate power and very little accountability. He plays footsie with heretics like TD Jakes and with dangerous charismatics and egalitarians like Judah Smith. He validates the "ministries" of people like Perry Noble and Steven Furtick. What, I ask, could he possibly do that would finally earn an open, public rebuke from TGC? If not these things listed above and the many others, then what? I'm glad he is correct on some of the important doctrines, but that does not make him qualified for the ministry. He needs to step down for a time and focus on cleaning his heart and mind."

YankeeGospelGirl had this to say:

"I'm not sure how I feel about people continuing to speak of Driscoll and review his books favorably. It seems to me that he's ventured into dangerous territory, both sexually and spiritually, and that other pastors would be wise to take a step back from endorsing him as a consequence. I've heard some hair-raising stories about how he's handled his leadership of Mars Hill. Perhaps we should reconsider whether he truly is "in the fold" of solid spiritual leadership and orthodoxy.'

I do give Tim Challies credit for allowing these critical comments to stand in response to his favorable review of Driscoll's book.

Yet, the Calvinistas are so busy circling the wagons that they have no idea how ridiculous they appear to those of us who are outside their little YRR bubble.  The longer they remain silent about the Mahaney/SGM debacle while actively promoting Mark Driscoll, the more suspect they appear.  Guys, it's time to man-up!  No more covering up the sins of your brothers.  Too many people have been hurt by these characters who are masquerading as shepherds.  It's way past time to stop promoting the Calvinista brethren who have serious issues.   We are watching, and so is our Lord and Savior Jesus Christ.

She was offered a way out by her brother. She had options to protect her children but chose not to.
View on Twitter
16
0