"The second woman Rachel quotes is Stacy McDonald, who wrote a book entitled, Passionate Housewives Desperate for God. McDonald is associated with the Vision Forum and the biblical patriarchy movement, so it’s clear that she isn’t representative of the core of modern evangelical complementarianism either. I don’t even know who she is . . . though if I googled “housewife + homemaking + evangelical” and threw “homeschooling” in there for good measure, her name would undoubtedly come up. (p. 24)." 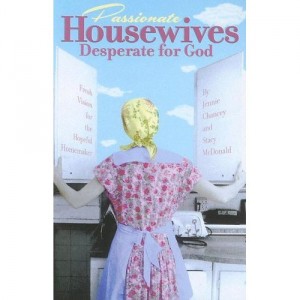 When I read Mary Kassian's remark (quoted above) in her critique of A Year of Biblical Womanhood, I wondered — does Mary live in a vacuum? (no – not the kind housewives use! 🙂 )

Then I realized it is virtually impossible that Kassian does not know about Jennie Chancey and Stacy McDonald, authors of Passionate Housewives Desperate for God.  Why?

(2) Kassian and Dorothy Patterson have served together as Council Members for the Council on Biblical Manhood and Womanhood for YEARS, probably since its inception.  Surely in her dealings with Biblical Womanhood matters at SBTS and with CBMW she has discovered that Dorothy endorsed Passionate Housewives Desperate for God.  Here is that endorsement proudly featured on Doug Phillips' blog — Mrs. Paige Patterson Endorses Passionate Housewives Desperate for God.

“The biblical paradigm for womanhood is marked by clear, though often hidden, distinctives. Especially are these noted in the Proverbs 31 description of the ‘woman of strength.’ PASSIONATE HOUSEWIVES DESPERATE FOR GOD provides the bookends for the life of this remarkable woman—on the one hand, she is passionate, enthusiastic about everything to which she puts her hand, even the most mundane tasks in her home; on the other hand, she is totally committed to what God wants her to be and to do without being swayed by culture or peers. She makes no apology about devoting her foremost energies and greatest creativity to her own family and household, and in so doing she is confident of offering her best and most precious gift to the Lord! Give us passionate women who are desperate for God, and we will change the world!” Dorothy Patterson, wife of Paige Patterson, president of Southwestern Baptist Theological Seminary."

(3) Nancy Leigh DeMoss, Kassian's close friend who recently co-wrote True Womanhood 101: Divine Design with her) interviewed Jennie Chancey and Stacy McDonald for her radio broadcast when their book was published.  Here is DeMoss pictured with these two passionate housewives.  I find it difficult to believe that DeMoss never mentioned this interview to Kassian.

Before Dee and I launched The Wartburg Watch in 2009, we read everything we could find on 'biblical patriarchy' and 'godly womanhood'.  Here are just a few of those resources:

And What Is It About Biblical Patriarchy That Scares Us? (Wade Burleson)

Given that Kassian is on the faculty of Southern Seminary, isn't it her responsibility to stay informed on these matters?

As an aside, I find it interesting that Doug Phillips' father – Howard Phillips – and Nancy Leigh DeMoss' father – Arthur DeMoss – worked together with Jerry Falwell to establish the "Moral Majority".  Here is how Howard Phillips described that connection.  (link)

"During a series of meetings, I proposed that the name of a new organization which Jerry would lead be the “Moral Majority”. In this, I was supported by several of Dr. Falwell’s colleagues, including Arthur DeMoss (head of the Lincoln National Life Insurance Company)."

Then there are these remarks by Mary Kassian in her review of Rachel Held Evans' book:

"A few sentences later, I had my first and best laugh of the whole book. “Evangelical complementarianism,” claims Rachel, “[is] a movement that began as a reaction to second-wave feminism and found some of its first expressions in the writings of Edith Schaeffer (The Hidden Art of Homemaking, 1971) and Elisabeth Elliot (Let Me Be a Woman, 1976).” Rachel goes on to explain that complementarianism rests on the “uncompromising conviction [that] the virtuous woman serves primarily from the home as a submissive wife, diligent homemaker, and loving mother.” (p. xix).

“The Hidden Art of Homemaking???!!” I just about fell off my chair. That book was written seventeen years before the inception of CBMW and about twenty years before we adopted the term “complementarian.” I have never even heard of it. I highly doubt whether John Piper and Wayne Grudem—the founders of CBMW—have read it. So to cite it as the first expression of evangelical complementarianism is hardly defensible. Complementarians would certainly not identify it as such."

Had Mary Kassian been keeping up with the 'girl talkers' (Carolyn Mahaney and her three daughters), she would have discovered this fun fact in their post — Girl-to-Girl Talk: Noel Piper.  Here is what Noel had to say:

"The best “spiritual” book I’ve ever read (besides the Bible) is: …and besides my husband’s books . . .  Combining bad memory with too many books, I’ll mention authors instead: Elisabeth Elliot, Joni Eareckson Tada, Edith Schaeffer. One with long-lasting impact is Schaeffer’s Hidden Art (now with the unfortunately-limited title, The Hidden Art of Homemaking."

If Kassian has been a close friend of John Piper for all these years and an author of books on womanhood, why doesn't she know that Noel Piper has been tremendously influenced by Edith Shaeffer's book The Hidden Art of Homemaking?

Finally, why is Mary Kassian consulting the matriarch of the homemaking movement – Dorothy Paterson – if she (Kassian) is disparaging homemaking to some degree in her review?

Kassian has been involved with CBMW since its inception, and I would really like to know why their website has been 'under construction' for over SEVEN MONTHS?!  Are they scrubbing it?

It certainly appears that Mary Kassian is obfuscating, and we have to wonder why…