"The Bible is a book that has been read more and examined less than any book that ever existed." –Thomas Paine 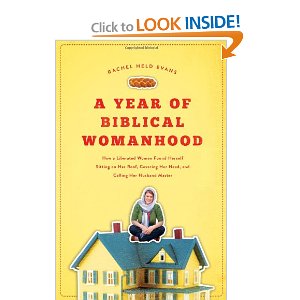 Oh good night! The “really saved” brigade is out, proclaiming that Rachel Held Evans, in her books and her blog musings, is guilty of heretical ravings. Some even claim that she is not a Christian and will be judged by God! (Did you not know that there are people on earth that know God's inner thoughts? In some circles that might be considered borderline mental illness.)  Of particular concern is her current book, A Year of Biblical Womanhood.  This book is garnering the interest of major news outlets, and, as such, deserves intelligent conversation that goes beyond “stomping feet.” I believe her critics and, to some extent, Rachel Held Evans herself, are missing out on a golden opportunity.

Denny Burk weighed in with a negative review here. Please read the comments. He does get pushback.

Of course, The Gospel Coalition weighed in and linked here to a negative review of the book by a woman on the Desiring God site.

Note to The Gospel Coalition: We are in Day 7 of silence on the filed lawsuit against one of your founders, CJ Mahaney. I guess child sex abuse takes a back seat to an “uppity” woman, hmm?

Roger Olson wrote a positive review of the book here.

I have watched her interviews, read her blog, and previewed some marketing videos. Please watch Evans' seven minute MSNBC interview and her two, one-minute videos promoting the book.

My review is not about the book, which I will read on an upcoming vacation. Instead, I want to discuss an underlying issue that I think many have missed no matter one’s opinion of the book.

Simply stated: The Old Testament is hard to understand for almost everybody except John Piper and some first year seminary students at SBTS.  Even Bible studies that purport to examine the “entire” Bible fail miserably in dealing with what I call the “please God, don't let them ask me about that verse" verses.

Through the years, I have listened and watched as Christians attempt to explain the Old Testament to inquirers.  It goes something like this. ”That was the Old Covenant that pointed us to our sins and our need for forgiveness. No one follows that anymore. Jesus took care of it. Let’s go to the book of John.”

But, we do practice some OT commands in some churches:

In other words, we still accept these things but attempt to put a New Testament spin on it. Most average Christians are visibly uncomfortable when confronted with issues such as:

When questioned on specific verses by outsiders, many run the other way. They excuse their inability to speak to the issue raised by condemning the questioner. “They don’t really want to know about God, they just want to criticize us. Don’t throw your pearls before swine.”

So, many stay inside their safe little churches and condemn atheists and agnostics for asking the hard questions. However, within those safe enclaves, strange theories abound and are tolerated. “If I can find it, I can claim it!” I have read those proclaiming the wonders of “The Leviticus Diet” and those selling the therapeutic oils of the Old Testament.” Here and here

Let’s face it. Many of the stories, commands, and the lifestyles of the Old Testament  can be difficult to understand and even harder to explain to those who are outside of the faith. For example, Christians condemn the polygamy of the early Mormons. Yet, David had multiple wives and concubines. The usual throw away Christian answer is that God allowed it due to David’s “hardness of heart.” The easy retort is, “So, why not now? I know lots of people who are hard in their hearts.” Of course, there are other ways to approach these questions but many Christians can't even get to first base.

Let’s take a look at a few rules of the OT from the NIV at Bible Gateway.

Leviticus 19:27, “‘Do not cut the hair at the sides of your head or clip off the edges of your beard.

Leviticus 21:17-23 “Say to Aaron: ‘For the generations to come none of your descendants who has a defect may come near to offer the food of his God. 18 No man who has any defect may come near: no man who is blind or lame, disfigured or deformed; 19 no man with a crippled foot or hand, 20 or who is a hunchback or a dwarf, or who has any eye defect, or who has festering or running sores or damaged testicles. 21 No descendant of Aaron the priest who has any defect is to come near to present the food offerings to the Lord. He has a defect; he must not come near to offer the food of his God. 22 He may eat the most holy food of his God, as well as the holy food; 23 yet because of his defect, he must not go near the curtain or approach the altar, and so desecrate my sanctuary.

Leviticus 12:1-5 Say to the Israelites: ‘A woman who becomes pregnant and gives birth to a son will be ceremonially unclean for seven days, just as she is unclean during her monthly period. 3 On the eighth day the boy is to be circumcised. 4 Then the woman must wait thirty-three days to be purified from her bleeding. She must not touch anything sacred or go to the sanctuary until the days of her purification are over. 5 If she gives birth to a daughter, for two weeks the woman will be unclean, as during her period. Then she must wait sixty-six days to be purified from her bleeding.


It is important for us to remember that the Israelites were living under a theocracy. God functioned as the ancient FDA, CDC, police force, refuse management, etc.

So some of the rules make sense. The Israelites could not eat shellfish because shellfish are bottom dwellers and eat anything that sinks to the bottom of their habitat – including human waste. Such a rule would protect the Israelites from an E Coli gastroenteritis which can be fatal for the young and the elderly.

Added at 4:50PM "And this begs the obvious question. What makes someone pure? I can imagine that all of those priests, etc bringing the offering all had their impurities hiding under the surface. So, is God interested in only the "superficial?" Who is more pure: a dwarf or a priest who is lusting after HIldah?"

Other rules are not so easy to explain, especially the command that those with birth defects were prohibited from bringing food offerings to God. The flip answer about "purity" pales beside the concern for compassion of the person with a birth defect. Of course, I could take the John Piper approach and call anyone who doesn't like it a sinner. That takes care of that, doesn't it?

Please feel free to share with all of us your particular “weird” law of the Old Testament. Try to explain why you think that law was instituted. Here is an example of what I mean

Leviticus 19:19
“‘Do not mate different kinds of animals.”
(Perhaps due to the sterility issue?)

“‘Do not plant your field with two kinds of seed.”
(Bad for the nutrients in the soil, one attracts vermin from which the other did not have immunity?)

“‘Do not wear clothing woven of two kinds of material.”
(Possible shrinkage making the item too small and misshapen, rendering it useless. Difficult if resources are scarce?)


My good friend, Eagle, and I have had frequent conversations in which I have told him that I do not have answers for all of the verses in the Bible. I do, however, believe that the Scriptures give me the single best narrative that explains the world around me.

So, here is my concern for everyone in this conflict. I do not believe that Christians have done a great job of explaining the Old Testament and why we pick and choose what we will follow. I also do not think Evans’ explanation of “just following Jesus” immunizes her either, although I understand her sentiments. We are given the whole Bible and cannot cut out the inconvenient parts.

We (all of us, not just the theologians) must deal with the inherent difficulties in parts of the Scripture. We need to be able to communicate these struggles to a questioning world. I am most frustrated that this conflict has boiled down to critics claiming heresy instead of kindly explaining their understanding of the issues to those who are listening. I think Evans could ramp it up a bit as well. For example, she could explain how Jesus fulfilled the law and how the dietary restrictions were lifted in the New Testament.

I think everyone should read Evans' book and wrestle with the issues she raises. I also think that her critics, especially all the self-proclaimed “gospelly correct” leaders, need to look at themselves and figure out how they can do a much, much better job in helping a watching world, along with people in the churches, to better understand the Old Testament laws and their relationship to the New Testament. For example,they could explain why God declared a woman, during her period, unclean for 12 days. That would be much more interesting than the usual ho-hum "look at the heretic" response.

Right now, it looks as if Evans' critics are more concerned about "proving" her heresy as opposed to taking this unique opportunity to explain the Old Testament to a confused world. We sure shoot our own, don't we? Oh yeah, "they" don't think she is one of our own.