"Stand fast therefore in the liberty by which Christ has made us free, and do not be entangled again with a yoke of bondage." 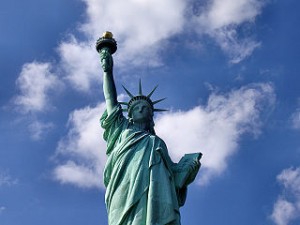 Ten years ago my family began attending a church plant from a well-established Southern Baptist congregation.  That was before all the "church planting" hype that has become so prevalent.  It was the most wonderful church, and I was ecstatic to be a part of this fellowship of believers.  Our church had an interim pastor, whom I enjoyed tremendously, but he was approaching the end of a long career of ministry.  The search was on for a full-time pastor.  A number of candidates came and preached, and finally the congregation called a young and talented man of God.  That was the following June.  On September 7, 2003, our church was formally established with close to 250 members.

How did we become church members?  We attended a couple of membership classes and were interviewed by two of the church leaders (primarily to share our testimony).  Since it was a Baptist church, those of us who joined had to have been baptized by immersion.  Then during that beautiful Sunday morning service in September, we signed a Covenant.  This was something entirely new to me; however, it didn't bother me at the time.  Everyone who joined the church was committed to seeking unity, sharing responsibility, and serving in the ministry.  Who could argue with those Christian ideals?

A year went by, and the event was commemorated on what has come to be known as Covenant Sunday with all the members agreeing once again to abide by the membership covenant they had signed.  This congregation just celebrated its ninth anniversary last Sunday by re-affirming its covenant.

My family only reaffirmed the covenant once (in 2004) because by the time the next Covenant Sunday rolled around, we were long gone!  You see, our church went through a terrible ordeal.  Suffice it to say that influential elders wanted a change in leadership not long after the church had been formally established, and they went about it in what appeared to be an underhanded way.  When the strife became known after months of back room wrangling, it caused tremendous dissension within the congregation.  The mishandling of the situation was threatening to split this newly established church.  I expressed my outrage in a three-page letter addressed to the head elder.  I hand-delivered it to the church, but it was NEVER acknowledged.  It was an extremely upsetting experience for everyone in the congregation.

Early in 2005 a seminary president began meeting with the pastor and elders on a weekly basis.  Things became much more settled.  Then on the first Sunday in April, Dee's husband visited our church for the first (and last) time.  My husband and I were pleasantly surprised to see him seated in the worship center.  During his message, our pastor informed us that he would be making a special announcement after the service.  Dee's hubby hung around to try and learn more about our church.  All of us were in complete shock when our pastor announced his resignation, effective May 1, 2005 (my wedding anniversary).  I was devastated!

I took the resignation very hard because I really liked my pastor.  No, he wasn't perfect.  Who is?  But he had such a tremendous gift for teaching God's Word.  My faith and understanding of the Bible were growing by leaps and bounds under his leadership.

In the middle of April I felt compelled to write a memorandum to the head elder, who had replaced the one to whom I addressed my scathing letter several months before.  Looking back, I realize that this was how I got my start in what I am doing now through TWW.  I handed the memo to him in person just as I entered the worship center on a Sunday evening.  After the service, I happened to meet the head elder in the hallway.  He had read my memo, and we had a verbal exchange which probably lasted about ten minutes.  I reiterated what I had written, which was my extreme disappointment over what had occurred.  He got so exasperated with me that he blurted out the words in Luke 6:41-42.  Needless to say, that brought our verbal  exchange to an abrupt end.  This man holds a prominent position in our state and is up for re-election.   I do plan to vote for him again, despite my great disappointment in his behavior toward me.

A couple weeks later, my pastor preached his final sermon, and we were gone!  Looking back, it's a blessing that I did not have to undergo church discipline!  In subsequent years, I have become more circumspect about everything that happened.

In the aftermath of that awful experience, I have come to believe that these unfortunate events were indeed providential.  I believe that God has used them to help me understand what is going on in Christendom.  What have I discovered?  Well, there have been some big changes in recent years, which we write about on our blog.  With regard to covenants that are becoming so prevalent, it certainly appears that they are legal documents used to keep church members in line.  While churches that implement these covenants may enforce them in a variety of ways, we have shared testimonies where they were used to invoke church discipline on members who simply disagreed.  Paul Petry and Bent Meyer, the two pastors that Mark Driscoll fired, are the first ones who come to mind.

Speaking of Mars Hill Church, many of our readers are aware that Mark Driscoll and his cohorts changed the church by-laws a number of years ago and put in place a new covenant that EVERYONE (including current members) had to sign in order to remain members.  Those who failed to sign the membership covenant were no longer members of Mars Hill (and there were quite a few of them).  Here is the current Mars Hill Membership Covenant.  Please read through it in order to gain an understanding of how covenants can be so controlling of church members.

Before signing a covenant, I would want to know whether it was prepared by an attorney and whether it is enforceable as a legal document.  We have written a number of posts that address membership covenants, which appear to be a growing trend in Christendom.  We hope you will find these topics helpful.

Another Mars Hill "Testimony:  One More Reason to Beware of Covenants

Peacemaker or Kingmaker?  Beware of "Covenants"