It is for freedom that Christ has set us free. Stand firm, then, and do not let yourselves be burdened again by a yoke of slavery.         -Galations 5:1 NIV 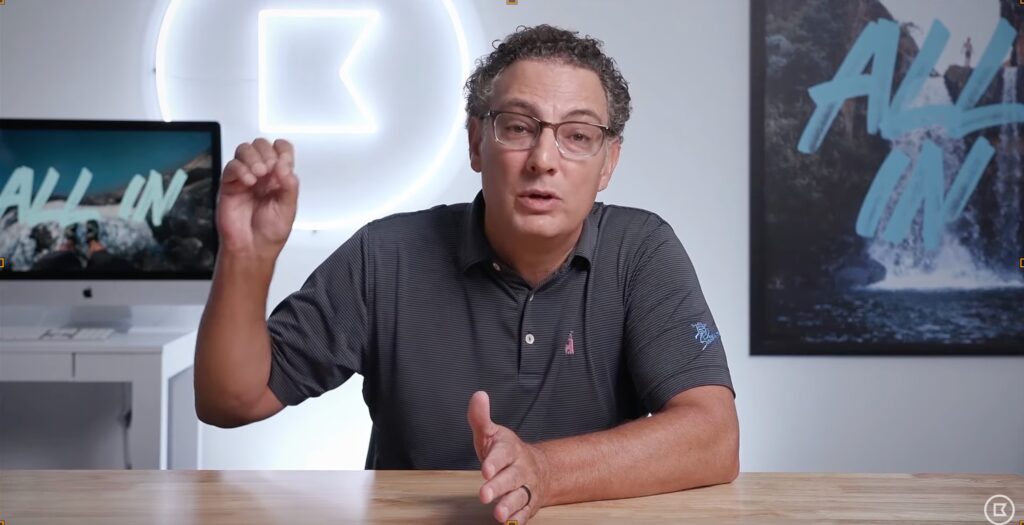 I was given an anonymous tip about a charismatic Baptist pastor that had people jumping off a cliff into a lake below as part of cleverly contrived plan to raise $50 million for the church. My interest was piqued, so I started researching the Southern Baptist, multi-campus church located in Tulsa.

What I found was a bright, energetic pastor that was a good public speaker and a gifted salesman; the type of guy that could sell sand to the Egyptians. Coupled with an expert media department that created slick videos and a company named Generis (comprised of professionals that work with churches to implement giving programs with proven results), Himaya spent six weeks of Sunday mornings preaching to his faithful followers about the importance of being “All In” for Jesus.  Sure, you would be asked to sacrificially give of your money, but you would reap a closer walk with Jesus and heavenly rewards in the next life.

What I witnessed was a slightly scaled-back, calmer version of the crazy Charismatic name it-claim it propaganda.

In that first article I also highlighted Alex Himaya’s close relationships with two former SBC Presidents – Ronnie “Armani” Floyd and Johnny Hunt. I also embedded a podcast in which NAMB National Director, Kevin Ezell and Johnny Hunt interviewed Alex Himaya about evangelism. IMO, these individuals integrity is less than one would hope for in an individual involved in full-time Christian work. But this is not surprising. These men are all part of the “good old boy” network of SBC leaders that the United States Department of Justice is investigating.

Below is a screenshot of the BattleCreek Leadership Team at the time of my first article. 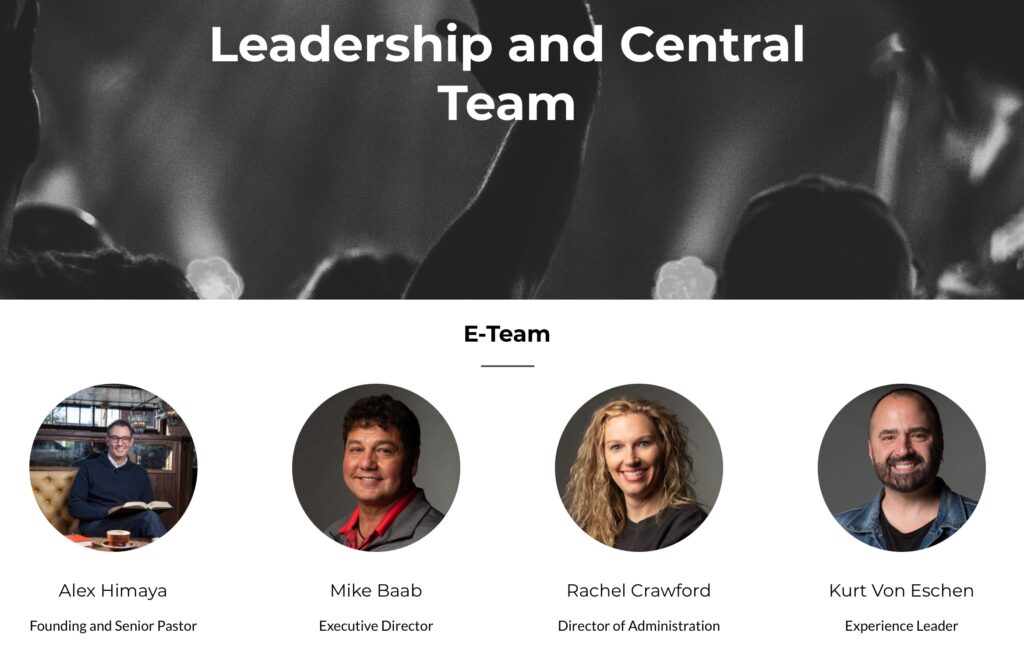 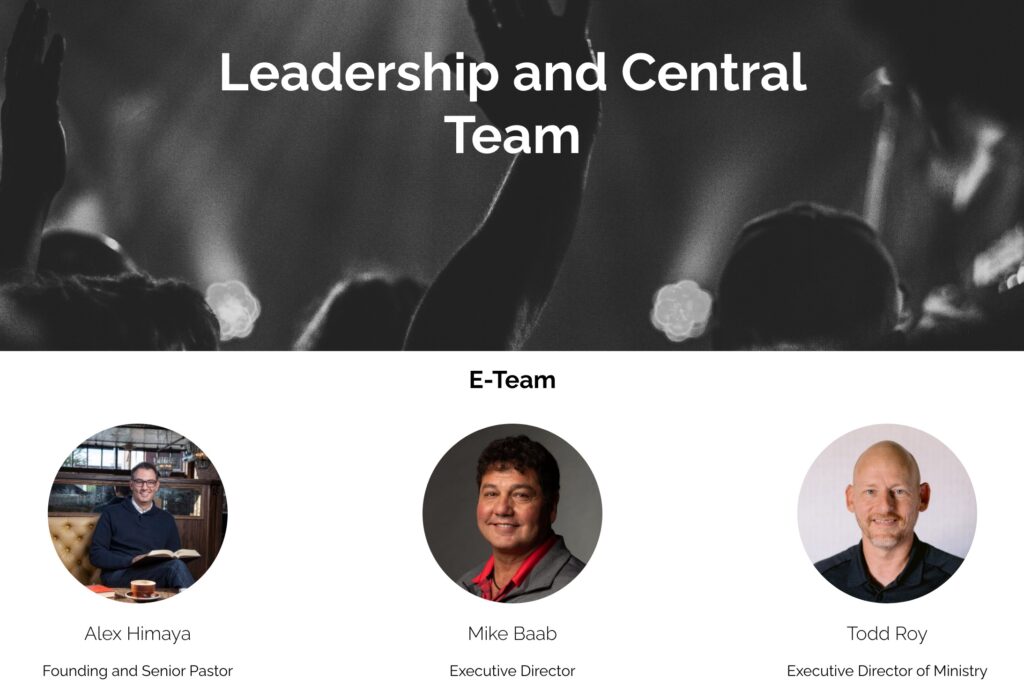 Why do I believe Kurt Von Eschen was terminated? Because after he suddenly left BattleCreek he moved to Conway, AR to be the “Pastor of Engagement” at New Life Church. Von Eschen seems to have been at that job for only a few months. From there he went back to Willow Creek to be the Worship Pastor.  So it would seem he didn’t leave BattleCreek for his dream job in Arkansas.  I am speculating here, but I would guess an old friend from Willow Creek called Von Eschen and persuaded him to move back to the Chicago area and be the worship leader for a Willow Creek church that was moving to a new building. Von Eschen is the lead singer, hopping around in the middle of the video below.

Now check out Kurt Von Eschen’s resume. I took these screenshots from LinkedIn at different dates, the older one is the bottom section. It is apparent that Von Eschen has doctored his resume. Why would he do this? Is he hiding something? This is unethical and it comes from a guy who has been in full-time ministry for his entire adult life. 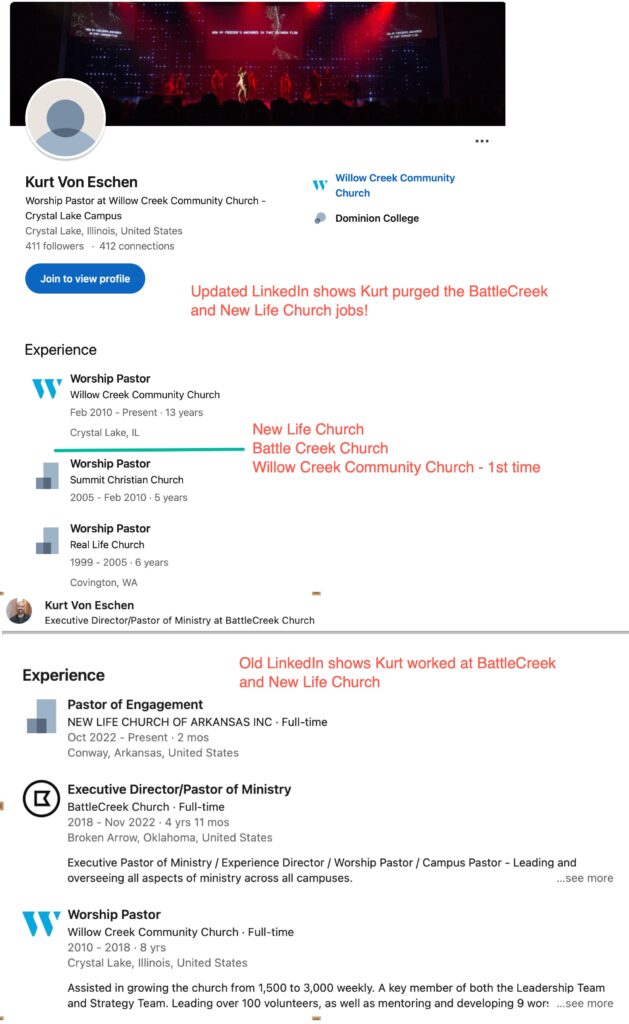 You may recall in a previous article I posted a video in which Alex Himaya gave a glowing introduction of Julie Bullock. She works for Generis and is also serves on the Board of BattleCreek Church. 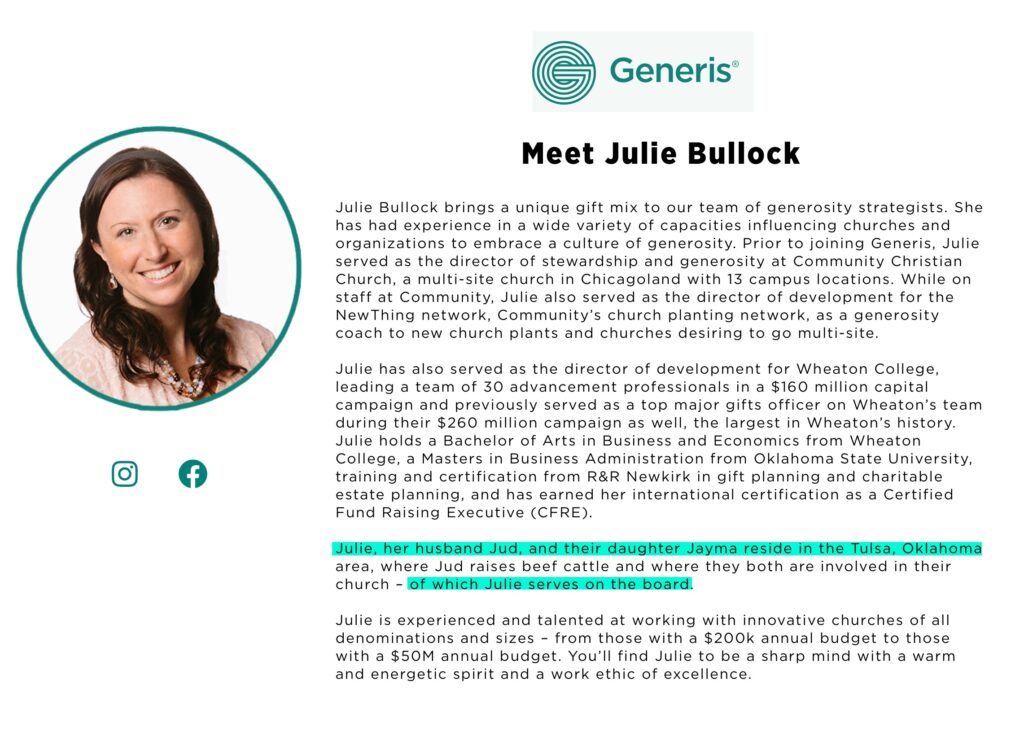 Below is a video of Julie Bullock. In this video Bullock says the majority of churches she has been working with didn’t need their PPP funds, so maybe they put more money in the bank than ever before!

PPP “loans” were basically free money given to help hurting businesses make it through the tough times during the COVID 19 epidemic. The money was to be used for payroll or utilities. As long as you didn’t fire or lay-off any employees these “loans” would be forgiven – so it was basically a huge government give-away. Evangelical churches across the nation jumped on this free money like a hungry duck on a june bug. Yet Bullock appears to gleefully tell her audience that most churches didn’t need the money and implies that they banked it! She is smart enough not to identify any of these church, or say for certain they banked the money, but again, I find this news repulsive. Churches, of all organizations, should not be bilking the taxpayers out of their money. I venture a guess that Bullock knew the rules for the PPP loans, therefore her reaction when she heard from churches that “maybe” banked the “loans” should have been to advise them that this was not a legal use of the taxpayers money.

BattleCreek Church received nearly $1.3 million dollars from the US taxpayers. I wonder if perhaps they were one of the churches that, wink-wink, banked the giveaway?  Can any member of BattleCreek Church tell me if they see a yearly budget? Does the church have an outside audit by an independent company?  Members with integrity should insist on this. 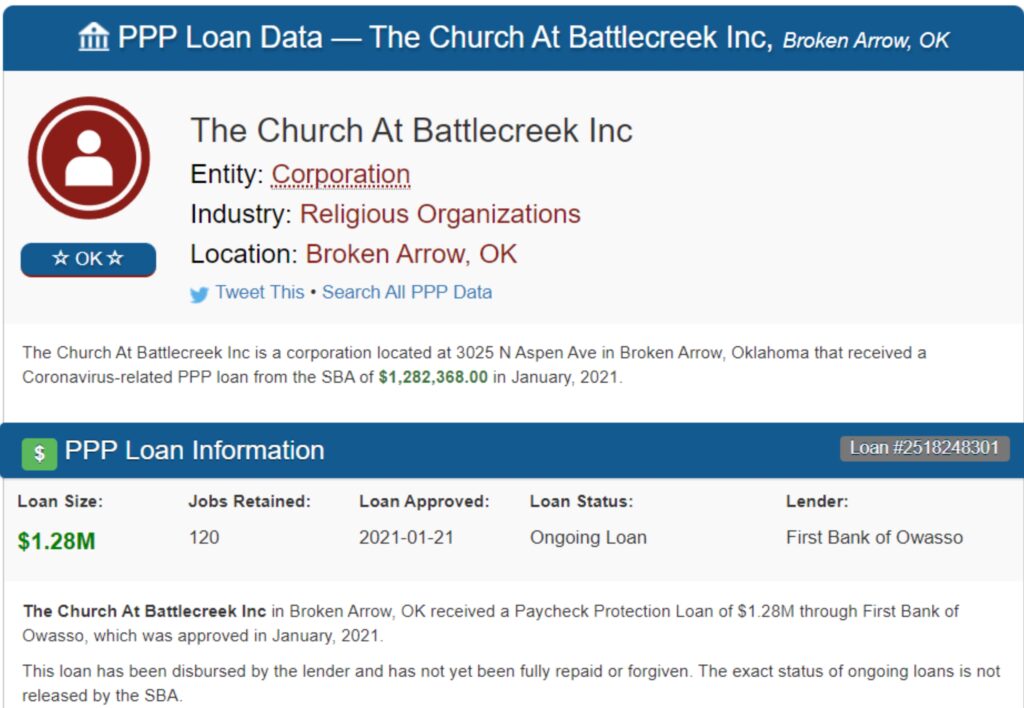 Next, meet Chris Campbell. He is a former associate pastor at BattleCreek church and now is the leader of the 111 Project. 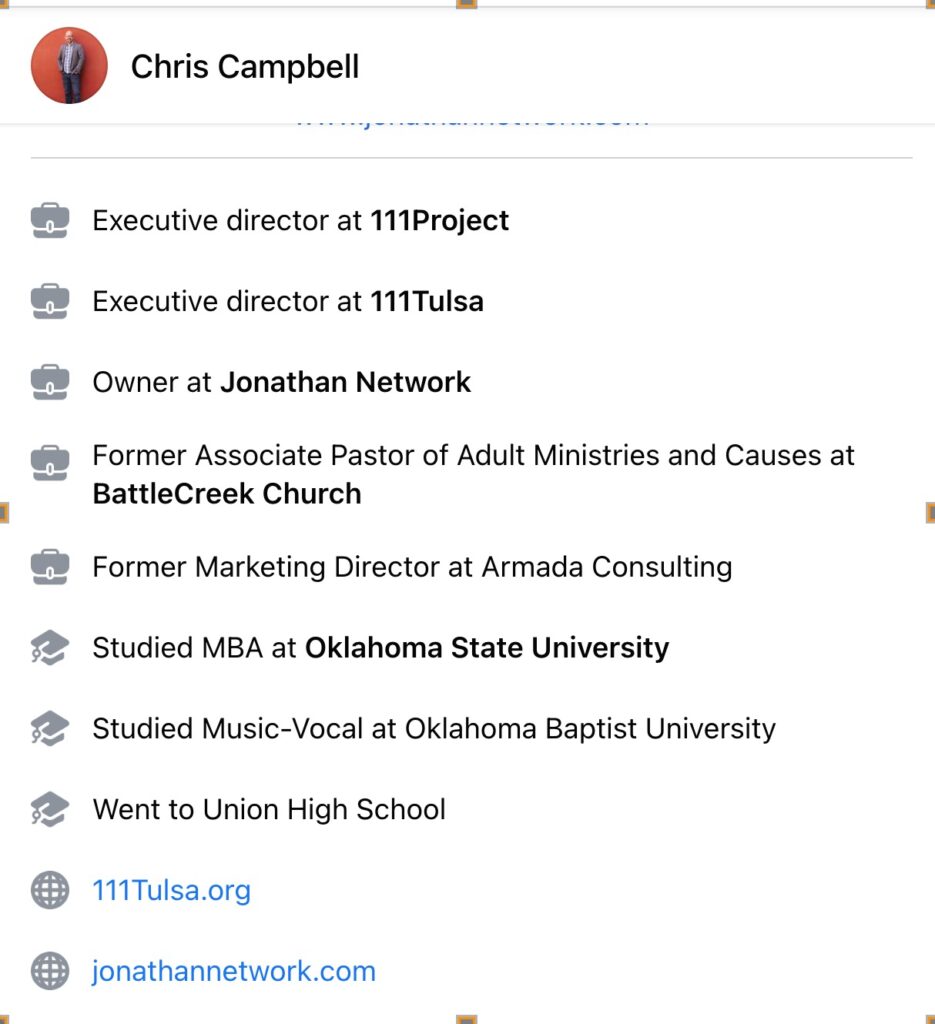 The video briefly explains what they do.

111Project Introduction from 111Project on Vimeo.

Care Portal sounds like a worthy project and BattleCreek is a big supporter of it. As I understand it, the 111 Project works to connect churches with the Care Portal project. The natural question to ask is where does the 111 Project obtain their money?  It appears to be from individual donors as well as churches. 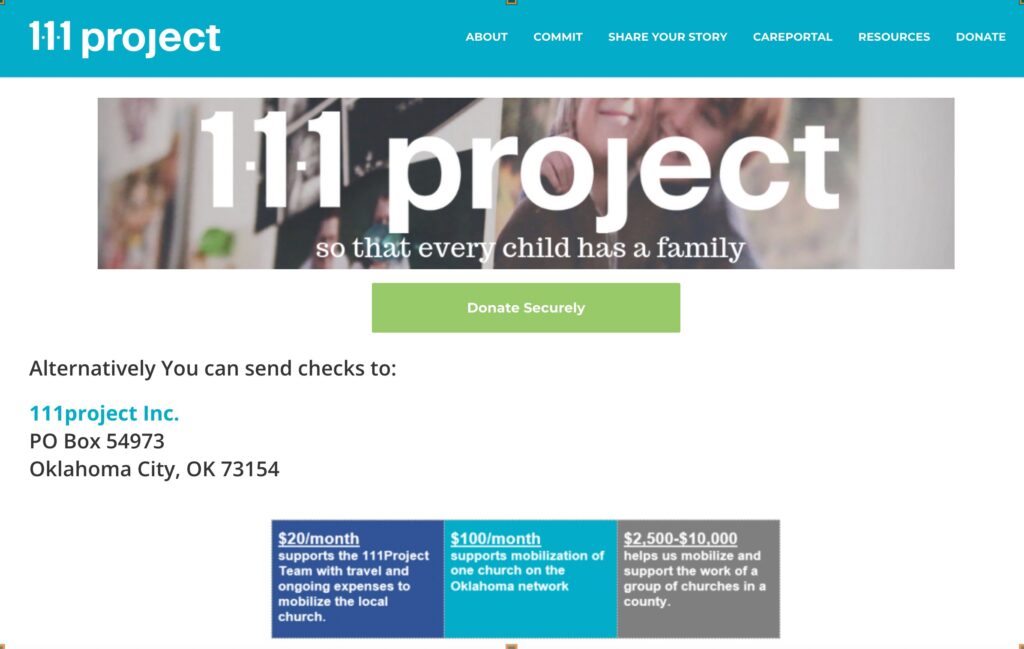 So where do I have issues with the 111 Project? Well, I have an elementary problem whenever the Church and State start working together. As James Madison said so eloquently:

“Every new & successful example therefore of a perfect separation between ecclesiastical and civil matters, is of importance. And I have no doubt that every new example, will succeed, as every past one has done, in shewing that religion & Govt. will both exist in greater purity, the less they are mixed together.”

See below for an additional issue I have. 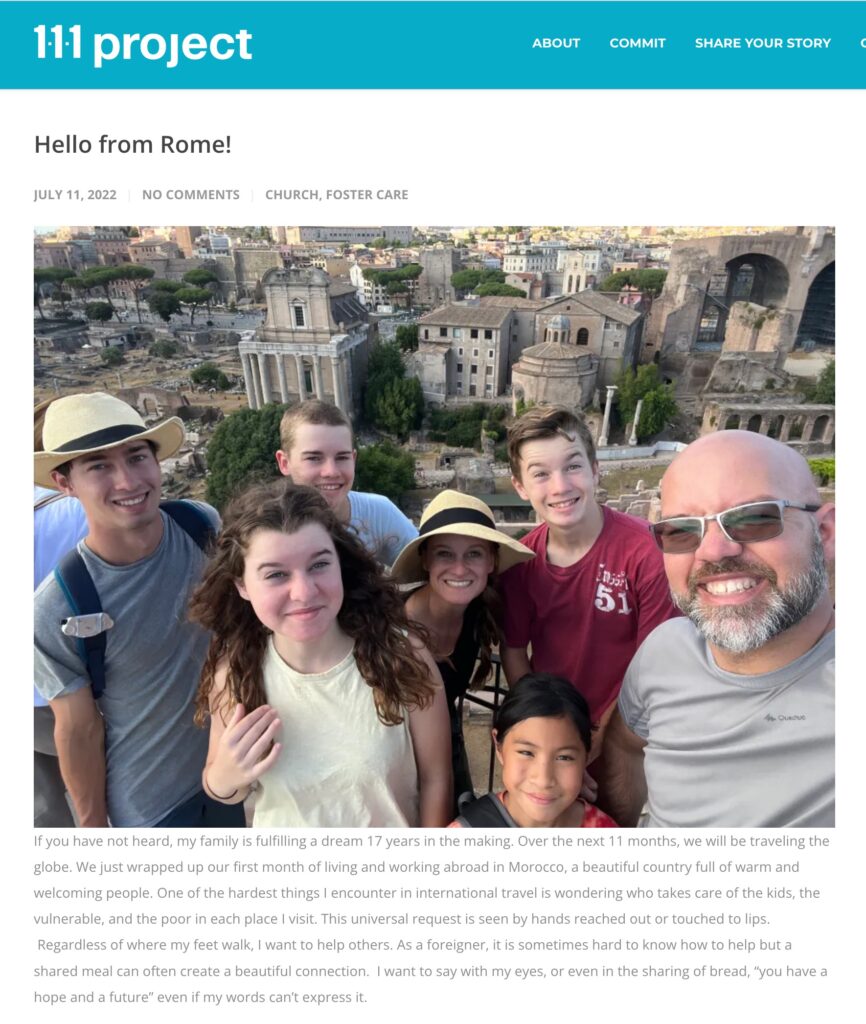 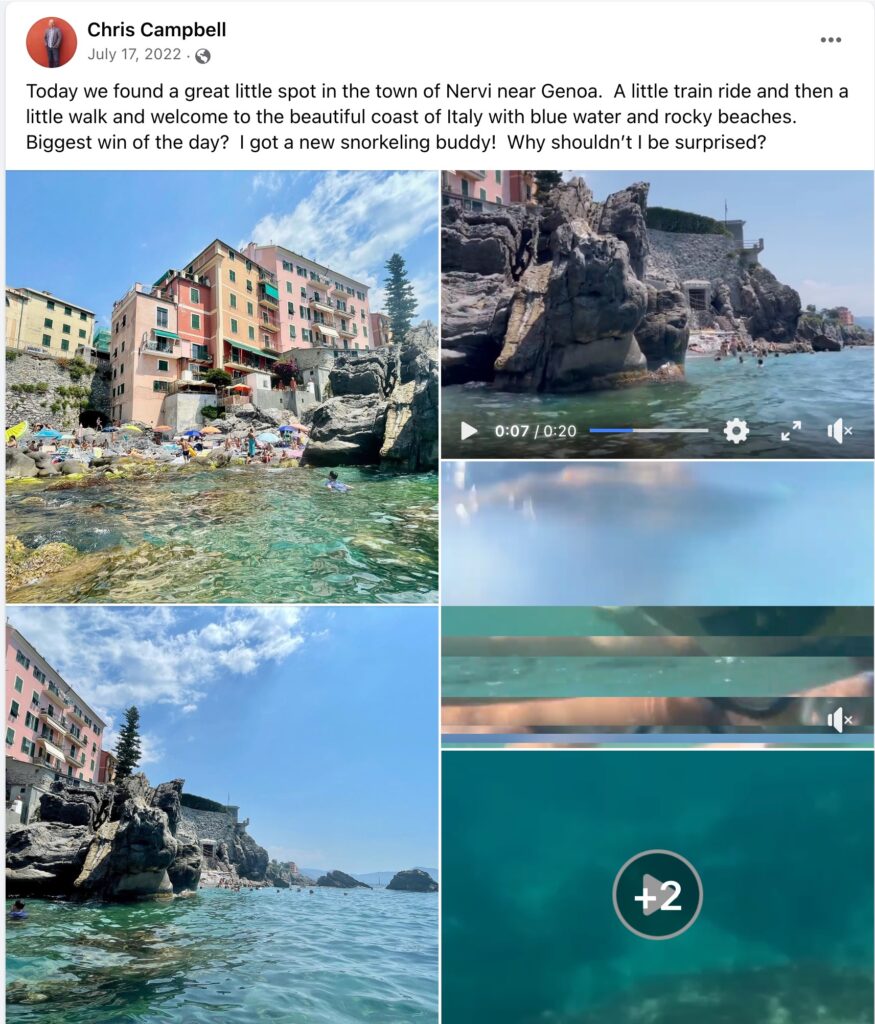 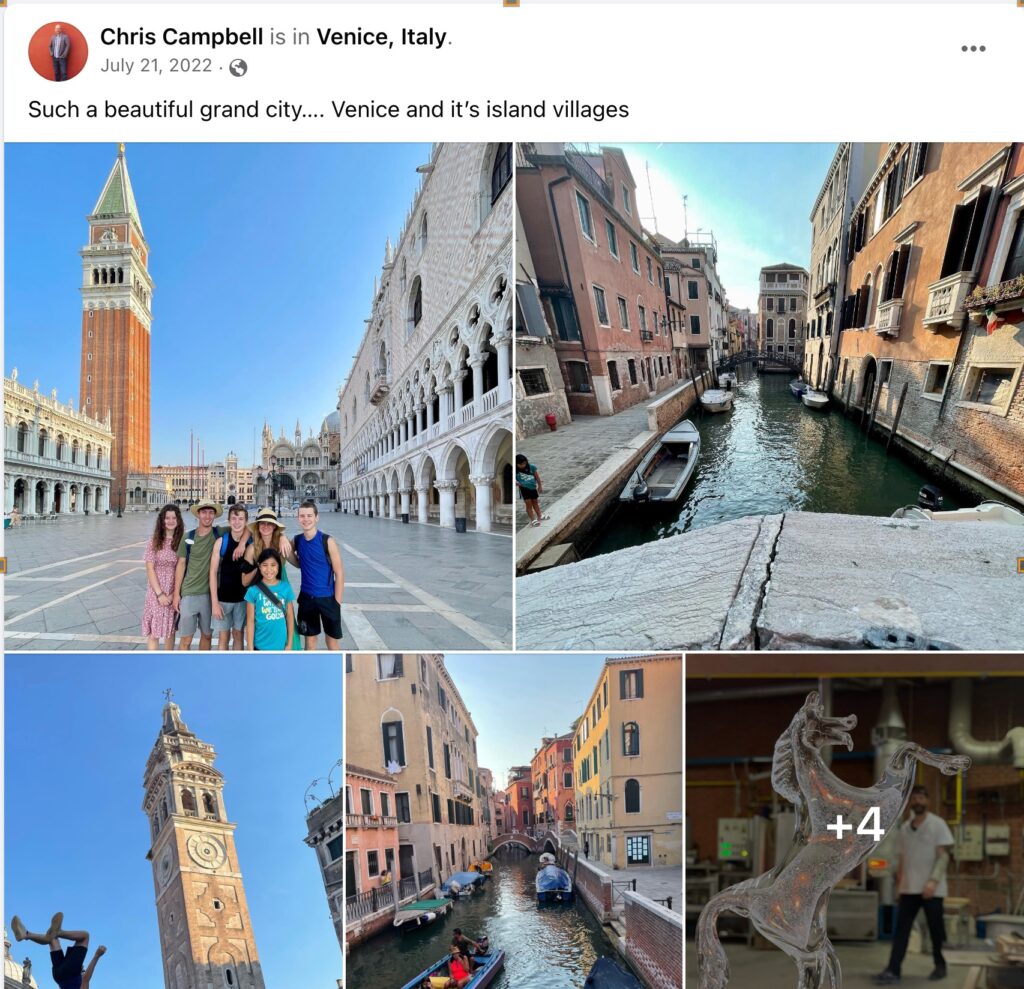 You get the idea.

If a family wants to travel the world, more power to them. I wholeheartedly endorse the venture. Just do it on your own time. If the 111 Project can manage for a year with Campbell having a few zoom meetings and answering emails, maybe they don’t really need the guy. Trim his job and be responsible with money from donors. Admittedly, I don’t know all the details of this arrangement, but on the surface the visuals are not good. If Campbell wants to share the rest of the story with me I will be happy to publish it. Meanwhile I probably wouldn’t recommend Christians donate any money to the organization, and were I a member of a church utilizing an “All In” type of program to put the squeeze on members, I would think twice about “giving till it hurts” while the leader of a charitable organization whose goal is find a home for children in Oklahoma is drawing his salary while traveling the world.

Finally, I want to end with an exchange I had with a BattleCreek Church member whose family was featured on the church’s social media. I have all the information saved, but decided not to embarrass the guy as I believe he has had enough struggles in life without me piling on. Suffice it to say that he was portrayed as being blessed by God with a good job, he was also an “All In” giver. I asked him a simple, straightforward question which he did not answer truthfully.  I have factual data that shows the guy has filed bankruptcy, he has had 2 lawsuits filed against him and his business was shut down. He currently opened a company under a different name, doing the same thing he did with the first company. He told me that Alex Himaya was a good friend. Maybe he is, but I don’t know if it’s wise to spread that around. Kind of like saying Johnny Hunt is a close friend and one of the world’s top pulpiteers of our generation, but I digress. 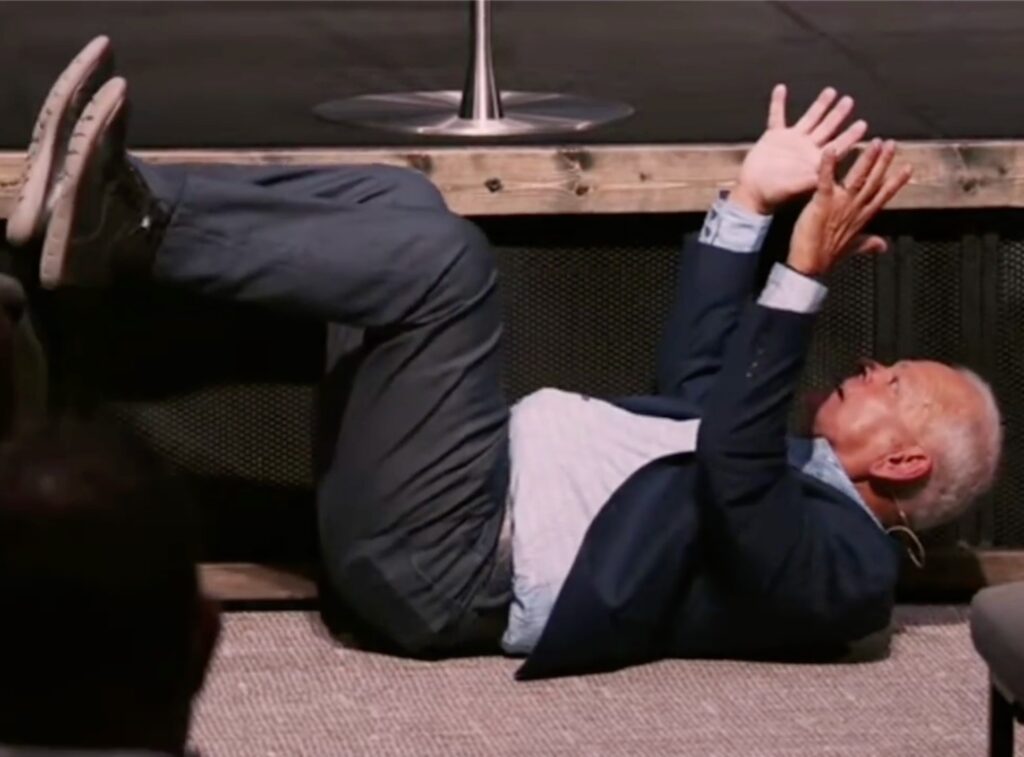 My opinion is that there are a whole lot of families attending BattleCreek Church that have been pressured to give beyond their means. Give freely, give cheerfully but give sensibly. Sure, Alex Himaya gets up in front of the church and tells how he and Meredith are also giving way, way above the tithe. They are your example. But are they really? Can anyone tell me how much Alex makes per year? If I am earning $1 million dollars a year it’s much easier to give $150,000 to the church than it is for someone earning $50,000 to donate $7,500 to the church.  See my point? And this is just an example, I have no idea what Himaya earns per year. I can guess that he spends a boatload of money to put his daughter through law school at the University of Texas. He said he had 2 boys in college, but one of them has since dropped out of Liberty and is now on the BattleCreek payroll, so that helps. He has another daughter in a private Christian High School. I wonder what he payed for the destination wedding to Guatemala? I know the photographer was probably the best in the business with prices starting at $12,500.  His home in Tulsa is worth over $800,000. He also owns a much more modest home in Lynchburg, where I would guess his children lived while attending Liberty University. (And where his best friend, David Nasser formerly worked as the right-hand man for Jerry Falwell Jr.)