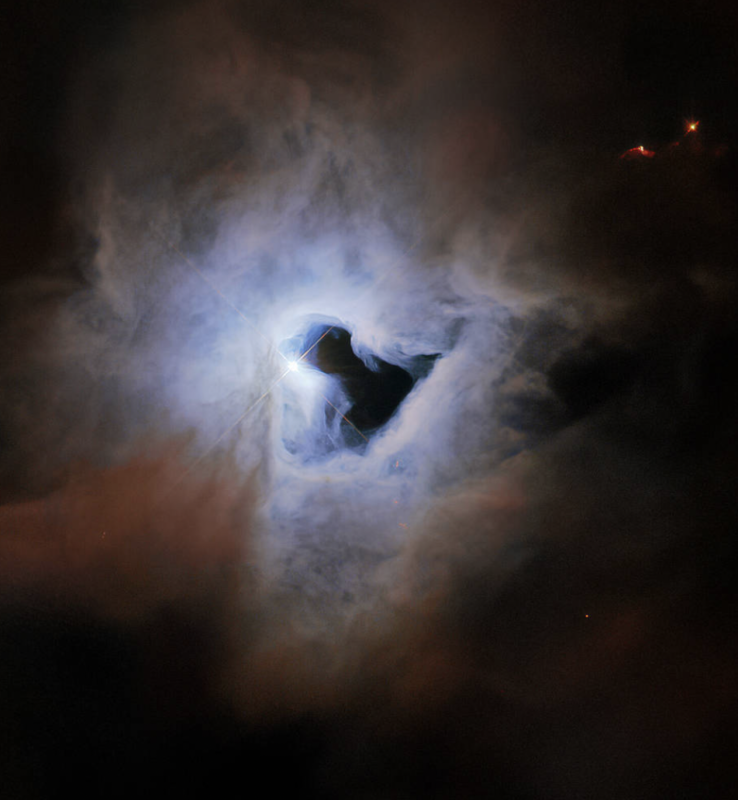 A reflection nebula in the constellation Orion. NASA

Today’s post took me on a journey into my past. Over the last year, I have become increasingly aware of God’s gracious leading of me that would one day result in this blog. As many know, I grew up in Salem, Massachusetts. My love of history was forged in playing hide and seek in Salem’s Essex and Peabody Museums which have now been combined. Students in Salem were allowed free admission. Most of my friends and I lived within walking distance of these sites, and we gave the guards a run for their money. (I repent, but I had the best hiding spot.)

I lived a block from St James Church, a Catholic Church that, in better days, had a nunnery, rectory, school, and a beautiful church. It had a huge, concrete parking lot, and when school/church wasn’t in session, Fr. Joseph Birmingham allowed us to race go-karts there. He even invited us into the rectory, offering cold drinks and snacks. He was so nice to us that I told my mom I wanted to become Catholic.

However, read the link for St James Church.

The priest pedophile scandals have especial resonance for St James Parish, for it was here that one of the first priest sex scandals came to light. The Rev. Joseph Birmingham molested dozens, perhaps even hundreds, of young boys during his tenure at St James in the late 1960’s. It was one of those molested, Paul Cultrera, who went public in 1992, causing dozens of others to come forward with their stories of molestation at the hands of Rev. Birmingham. The Catholic hierarchy naturally suppressed Cultrera’s disclosures, an effort abetted by Birmingham’s “fortunate” premature demise in 1989.

It was not until the Spotlight team at the Boston Globe revealed the multitude of priestly molestations in 2002 that the Birmingham crimes again came to light. The full shocking story is ably covered in Hand of God, a documentary put out in 2006 by Joe Cultrera, brother of Paul, and a film that should be must viewing for all Salemites. Bonus credit to any viewer who grasps the sexual pun in the title.

I would later learn that he molested one of our friends. I have often wondered about the other boys in our group. Birmingham preferred boys.

I called my mom today since I still have to distance myself due to Covid. She turns 94 this coming week. When I brought up the story, she said it upset her too much to talk about it.

.Of course, I saw the movie Spotlight, and my parents shared with me the information from the Boston Globe. I spent quite a bit reading about Birmingham and have written about this here.

So why this long history? I had become aware of something that the RCC did when this scandal became known. They offered a hotline where victims could call and report their crimes. The phone was being answered by lawyers and associates whose job was to protect the RCC. I was shocked by this. I am thankful for the work of Jeff Anderson and Associates. Jeff kindly advised me regarding the legalities of libel/defamation when I began blogging, and I have been forever grateful to Jeff and the good people of SNAP.

SBC’s ethical dilemmas: Does Rachel Denhollander wear two hats, and is this a conflict of interest?

(Christa is a retired appellate lawyer, and Denhollander is also an attorney.)

Given my background, I became concerned when I read the following post on Baptist New Global written by Christa Brown: SBC’s sexual abuse hotline raises an ethical issue. This was a difficult post for Christa to write. I, too, hesitated, but Christa speaks truth graciously. Rachel Denhollander is a respected abuse advocate who was also molested. Who can ever forget her role in bringing Larry Nasser to justice? At the same time, who can forget Christa Brown’s sexual abuse in the SBC and the decades of work that she has devoted to bringing this travesty into the public eye? She is the mother of all sex abuse victims and advocates in the SBC. I cut my teeth by reading Stop Baptist Predators.

Remember what I said about the RCC hotline in the early days? Abused people were unknowingly speaking with lawyers for the RCC. Therefore, it is incumbent on the SBC to take that knowledge and do a better job. As of now, it appears that the SBC might have a conflict of interest in how it functions.

Did you know this? I’m betting most of you didn’t. It’s information about the hotline that has not been widely disseminated. And that’s troubling.

For clergy sex abuse survivors, whom church and denominational leaders have often lied to, deceived and betrayed — again and again and again — maximum transparency about the entirety of the reporting process is essential for cultivating trust.

According to Brown, who has confirmed this information with Denhollander and Guideposts, here is what currently happens.

Since I get health care, not legal stuff,  I looked up the definition of the word “retain” in the Legal Dictionary.

” To engage the services of an attorney or counsellor to manage a cause, at which time it is usual to givehim a fee, called the retaining fee. The act by which the attorney is authorized to act in the case is called a retainer.”

…There is an implied contract on the part of an attorney who has been retained, that he will use due diligence in thecourse of legal proceedings, but it is not an undertaking to recover a judgment.

Two roles? A conflict of interest?

The question raised is interesting. Does Denhollander wear two hats, and is this in the victim’s best interest when considering contact with the SBC? According to Brown, she may be, wittingly or unwittingly, occupying “dual and potentially conflicting roles.”

One of the reasons I refuse to accept advertisements, kickbacks, etc., is that I want to avoid any claim I write to make money. However, I didn’t realize that a conflict of interest can occur whether or not the person (in this instance, me) involved is being paid.

When there is a conflict of interest in the legal field, attorneys and judges will recuse themselves from one of the conflicts. Could this possibly be a solution here?

The bottom line: This is about garnering the trust of survivors.

I bet you think I am saying that one cannot “trust” Rachel Denhollander. Not at all. This has little to do with trust. I am saying that we must go out of our way to avoid any appearance of conflicts of interest by setting up standards that keep us in accepted lanes. The SBC cannot afford to look like RCC 2.0. Survivors need transparency.

The SBC is not without continued scandal. Therefore, it must strive to work within accepted legal standards in order to bring order to the continued chaos.

Christa wrote another column in August 2022 for BNG: Skepticism holds seeds of hope: The SBC and clergy sex abuse.

I am unapologetically skeptical about the sexual abuse reforms passed by the Southern Baptist Convention last June in Anaheim. It is a skepticism founded on the SBC’s documented “damnable” history in this arena and on the fact that details of the new reforms are deeply troubling.

…At the very core of my skepticism rests a belief that transformational change may yet be possible within the SBC. If I didn’t believe that, I would not bother with repeatedly voicing my skepticisms and criticisms and would simply walk away, as a great many other SBC clergy sex abuse survivors have very rationally done.

…We all yearn for happy endings. But if we allow our own yearning to cause us to trust in words without concomitant deeds — to see what is not yet there in reality — then we do a disservice to the countless people who have suffered and sacrificed to try to move this faith group toward accountability and care. And we do a disservice to future generations of church kids as well.

Rather, it is a reflection on how deeply entrenched these systemic evils are within the institution of the Southern Baptist Convention — the sexual abuse of kids and congregants, the absence of clergy accountability, the cover-ups by churches, the maltreatment and bullying of survivors, and institutional betrayal at all levels.

The SBC has its work cut out for them. I have also voiced my concerns that the SBC may not be able to make significant inroads in preventing sexual abuse in its churches. Recent chatter on social media has focused on the “autonomy of churches” within the SBC family. I believe that the SBC is between a rock and a hard place. I am concerned that this belief can, and will, interfere with the ability to make significant strides in fighting sex abuse in a denomination that is quickly being viewed as the RCC of evangelicalism.

Denhollander’s critical role must be carefully defined and limited.

This is not about “liking” or “trusting”  Denhollander. As Christa said (and I agree),

My purpose is not in any way to degrade Denhollander, an individual for whom I hold great admiration and gratitude for all she has done in broadly raising awareness about the dynamics of sexual abuse.

It is no surprise to me that these groups contract and retain her. However, the SBC and Guidepost Solutions should agree that scrupulously following accepted legal standards and practices regarding conflicts of interest will go a long way in garnering trust in the victims, the “autonomous” churches of the SBC, and a weary world which is looking on.

I think David Bumgardner got it right.