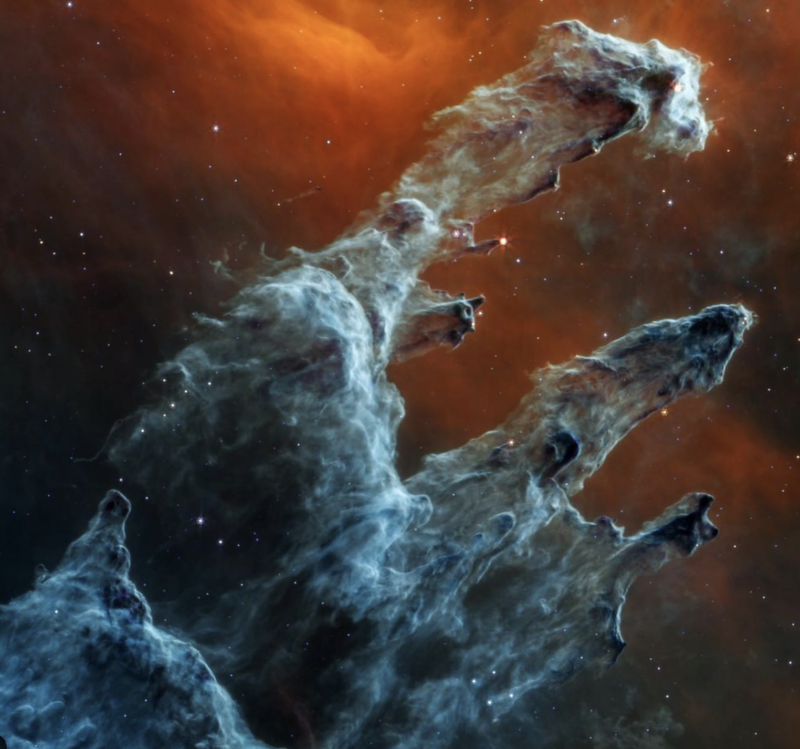 This weekend, after serving at an event at our church, Bill and I decided to watch God Forbid, The Scandal That  Brought Down a Dynasty, the Hulu documentary. “God Forbid” highlights the perversions of the Falwells, who pretend to care about and uphold the moral standards of the students who attend Liberty University. I wasn’t sure I wanted to watch it, given that I wrote extensively about the fall of Jerry Falwell Jr. and his wife, Becki, during the incidents In question.

For me, it started when Robert Downene retweeted this pic of Falwell. 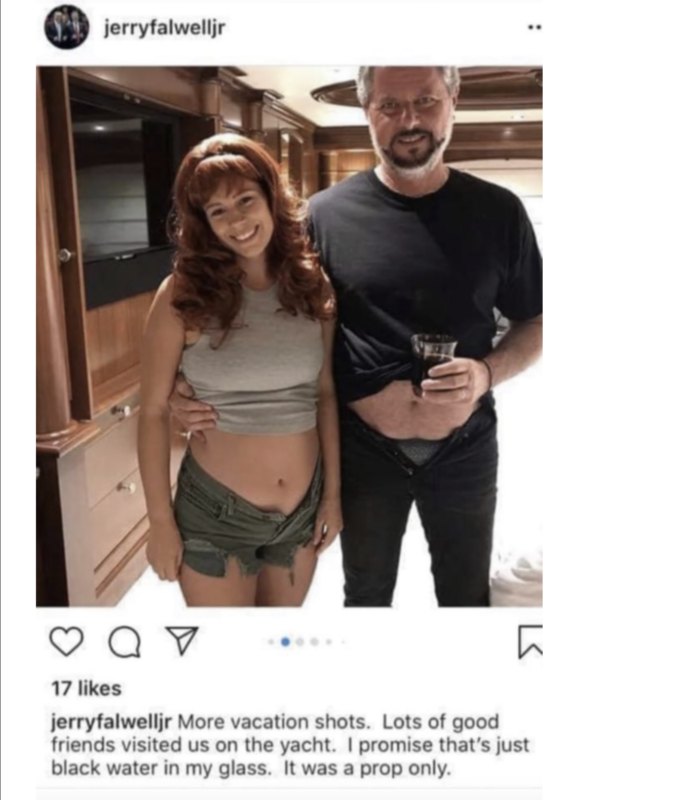 Downen discovered it was taken at a costume party, so he thought it might not be relevant. I, along with others, urged him to look into the picture, which proved to be the beginning of the end for Falwell.

Was this about sexual abuse? I believe that it was.

I will take a different approach than NPR in A new documentary follows an affair that felled evangelist Jerry Falwell Jr.’s career. I do not believe this was simply sex between consenting individuals, as NPR claimed. They seemed to want to focus on how the Falwells were merely poor role models for the LU community. Yes, they were terrible role models, but they were far more. They were predators.

This documentary does not set out to kink-shame the Falwells. Spend your money, go party, have consensual safe sex – that’s great. The issue is the hypocrisy. They are punishing people and they are threatening their financial security because there are fines for violating the Liberty way. They are threatening their academic future. They ruined people’s lives for holding them to a standard that the Falwells themselves never lived up to.

If one watches the entire documentary, one will see evidence that the Falwells utilized their power and influence to keep the pool boy on the hook, sexually servicing both Becki and Jerry. Let’s go back to the beginning.

What was this about a pool boy?

While working as a pool attendant at Miami Beach’s luxurious Fontainebleau hotel, Granda met Becki Falwell, who he said was sitting by the pool and taking photos of him from afar. Granda recalled that Becki had told him, “Don’t waste your time with the younger ones, they don’t know what they are doing.”

Becki and Jerry allegedly invited the pool boy to have sex with Becki while Jerry watched and masturbated.

That night, Granda received a phone call from Becki via a blocked private number. She asked that Granda meet her and her husband at a nearby Days Inn instead of at their Fontainebleau room because their children were staying there. Granda met Becki in the lobby of the hotel, where she gave him a cup of Jack Daniel’s whiskey to calm his nerves and proceeded to stroke his inner thigh.

Granda said that when he and Becki went up to her hotel room, Jerry Jr. was laid out on the bed with his jeans unzipped and a drink in his hand. While Granda and Becki had sex, which was “anything but penetrative,” Jerry Jr. took off his jeans and masturbated in the corner.

Becki and Jerry admitted to her relationship with Granda but denied that Jerry ever watched.

All news outlets reported this. According to People Magazine:

The Falwells have previously denied Jerry’s involvement and accused Granda of trying to blackmail them, which he has denied.

Strangely (Actually, everything about this story is strange and yucky,) Becki allegedly claimed she loved Granda within three weeks of meeting him and reportedly began to sleep with Granda on the bed while Jerry slept nearby on a couch.

Granda claims he and Becki would fall asleep in bed, while Jerry would stay on the couch

“The sleeping arrangement was, I slept on the bed with Becki, and you know, Jerry slept next to the bed,” Granda said. “Thinking back, it’s kind of strange.”

“Becki was the first person … outside of my family to say ‘I love you,’ and it’s just three weeks after meeting them,” Granda said.

Eventually, Granda claimed there were three-way sexual encounters with Becki and Jerry.

Granda becomes like “one of the Falwell kids” and got involved in a business deal with Jerry.

From there, Granda, who was then earning $200 a day as a pool attendant, says in the doc that the wealthy holy rollers roped him into an emotionally-charged sexual relationship, luring him in with trips on their private jet, interludes with their high-profile friends like Trump and promises of 50% equity share in a $4.65 million hostel in the heart of Miami.

An enchanted Granda leaped on the deal. “It felt like I was living in a movie,” he says. .

And he got to meet Trump, whom he admired.

Then, in July 2012, Granda tapped a friend to help him land the commercial property that would become the Miami Hostel. The vibrant property was furnished with an Italian restaurant, a liquor store and accommodations for overnight boarders, but the friend soon became suspicious about his relationship with Jerry and Becki.

“[He was] very curious about what was going on [between me and the Falwells],” says Granda. “[I’d say] ‘They just want to help me out,’ but obviously that didn’t make sense. They were convinced that there was more to it, and they were right.”

And as Granda’s alleged sexual and professional dealings with Jerry and Becki grew, so did the role that he played in their lives.

Rather than being a secret lover that they kept out of sight, the Falwells showcased him like a trophy. Granda says in the doc that he became close to their kids — with whom he was already close in age. He joined their family on holidays and special occasions.

And when Trump gave the convocation address at Liberty University in September 2012, Granda sat front row.

Add to this is Michael Cohen (Yes, that one) reportedly got involved to deep-six some unseemly pictures that Granda’s friend had. You can’t make this stuff up.

Back to the Salon article, which focused on Falwell appearing to threaten  Granda.

Granda recalled that the Falwells owned a 500-600 acre farm with a Confederate cemetery and a shooting range in their backyard. He added that Jerry Jr. had once told him, “Well, the good thing is now I know if Becki were to run away with someone, I know who it is. If that were to happen, if she tried to divorce me, I’d probably have her killed.”

Granda had enough and decided to expose the Falwells with Becki’s nude video.

Granda kept many of the texts and videos they shared over the years. However, one was both eye-opening and damning. In the documentary, Granda played a video of her that he kept on his phone in which Becki strips naked and takes him on a tour of all the places they had sex in their home, including in the kids’ bedrooms. Jerry makes a brief appearance.

According to Newsweek in Where is Giancarlo Granda Now?

n an excerpt of his book provided to People, Granda wrote: “Beyond my own complicity and moral failings, there was the fact that the Falwells had half a dozen tapes of Becki and me having sex, and those were just the ones I knew about. Aside from the embarrassment and chaos they could unleash, they also represented an unspoken form of blackmail, since implicitly, I had to do whatever they wanted. And what they wanted was to keep having sex.

“This eventually would reach a breaking point, and it turned out this was it. When our story finally went public, I said they had been blackmailing me the whole time, and I stand by that, even if they might not articulate it the same way. They always had these tapes hanging over my head, and for every second of that time, I carried a gnawing fear in the pit of my stomach that this would be my downfall. It almost was.”

All of this got exposed in 2020 in a Reuters article: Business partner of Falwells says affair with evangelical power couple spanned seven years. In the film, Granda said he was having trouble getting jobs after graduating from Georgetown.

Granda first emerged as a figure in the Falwells’ circle two years ago, when BuzzFeed News reported that the couple had befriended Granda and gone into business with him, buying a Miami Beach youth hostel in 2013. At the time of the BuzzFeed article, a representative of the Falwell family said Granda was “offered a share” in Alton Hostel LLC because Granda lived in Miami and would act as a manager of the youth hostel. Corporate records show that Granda currently has a stake in that venture.

There seem to be more and more long-term sexual predators being revealed in the evangelical world.

This long-term sexual affair with Becki Falwell, and allegedly with Jerry Falwell Jr, carried on for seven years. The Falwells supposedly represented Christian values and ethics due to their position at Liberty University. They were also supposed to be the faces of the quasi-evangelical movement and were profound failures. Becki would later be accused of having a sexual encounter with a LU student. Both she and Jerry appear to be sexual predators.

The Falwells used Jerry’s position to carry out their strange proclivities with pool boy. I’m not at all convinced that this was completely consensual for Granda. The Falwells appear to have used their position and money to influence Granda unfairly. That may mean this was not a simple consensual affair due to the power differential.

Ravi Zacharias went to his death with 100s of pictures of women on his phone. It is hard for me to imagine that the Falwells and Zacharias were Christians. The fact that these activities continued over long periods with no expressed remorse is indicative of their faith which appears to be dead and buried.

Warning to naive Christians: wake up and smell the coffee! Predators are targeting gullible Christians as well as those outside the church.

Jesus told us that there would be wolves who would attempt to harm the sheep. We assumed they would be around, teaching wrong doctrines like “denying the Trinity.” Instead, these wolves are men and women who look to harm folks. Never forget that all have sinned and fallen short of the glory of God. Some have sinned and have long left behind the faith they pretended to profess.