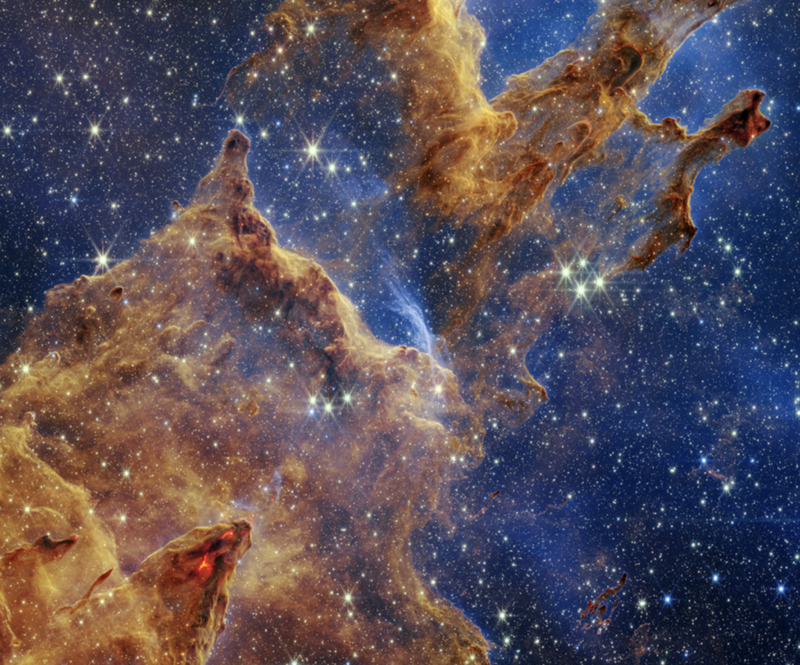 This incredible image of the “Pillars of Creation” where young stars are forming. James Webb/NASA

“Life is beautiful, but people are crazy.” Charles Osgood

Matt Chandler is coming back. 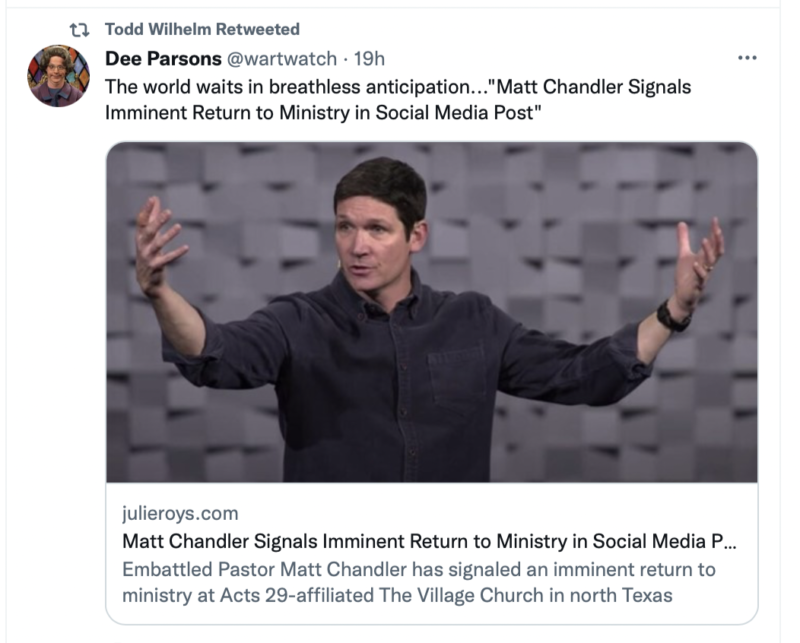 In his Instagram post Monday, Chandler wrote that his mantra the past few months has been: “Jesus, I don’t want to do this without you.”

He added, “Whether it has been going on a walk, heading out to our river cabin or even walking into Jiu Jitsu I have been more aware than ever of that earnest and angsty prayer of David’s in Psalm 27:4. He has been my sustaining grace and the strength of this season.”

It looks like he had a fabulous vacation. He even let us know he has a “river cabin.” Chandler appears to be pretty well off.

He thinks he would do it again? Missions and masturbation-his words, not mine. https://t.co/gkv0vFajCR

Mark Driscoll continues to exhibit what seems to me to be a “They’re always out to get me” syndrome. Is he bonkers?

I have been writing about Driscoll since I started this blog. I kept thinking he was going away, and then, like a bad cold that one can’t seem to shake, he’s back. Julie Roys wrote about this in Mark Driscoll Claims Mars Hill Leaders Were Plotting to Accuse Him of Adultery.

Driscoll alleged that prior to resigning from Mars Hill, God told him “that a trap was set.” Then, during an 18-month hiatus following his resignation, Driscoll said he met multiple times at Panera with some “critics and enemies” who used to be friends, “some who were pastors, some who are still pastors.”

Driscoll said when he asked these former friends about a possible trap, they responded that “the nuclear option was that we were going to accuse you of adultery.”

Driscoll said the plan was to get him “out of the pulpit.”

Sutton Turner denied it was true.

However, I am going to disagree with Turner. Driscoll doesn’t seem to be merely “throwing dirt  on the former investigative elders.” I believe that it is possible that he has been and is now exhibiting signs of paranoia.

Psychiatry. a mental disorder characterized by systematized delusions and the projection of personal conflicts, which are ascribed to the supposed hostility of others, sometimes progressing to disturbances of consciousness and aggressive acts believed to be performed in self-defense or as a mission.

One can look back on his circles of trust, which I wrote about in Dear Mark Driscoll. He’s Back and, If the Stories Are True, He Appears to Be Bonkers.*

There was a group of men who were trusted to be part of Driscoll’s security entourage.

The detail was formed to provide safety for you and your family, with Marc Stirton running the screening and selection process for those so allowed to be in your “inner circle” as he is a “trusted” friend of the family.

Driscoll is increasingly isolating himself and is allegedly building a secret corridor(I wonder if the church members are paying for this?)
You currently have an engineering team working on drafting the plans to blast a hole through the concrete and steel wall backstage to have a private entrance into your office from behind stage so you “don’t have to deal with being interrupted by people.”

The spectrum of trust when the Driscolls are a level 10!

Brandon said my ability to lead my family was in question because I was seen in a photo with a Pastor Dustin, whom you treated horribly and slandered. Brandon said he just sat through a staff meeting where you went over a “Spectrum of Trust” with the staff, where you rated individuals on a sliding scale of 0-10 based on how much trust you and the church have in them. He pulled up a picture he took from the dry erase board in your office and proceeded to brief me on this spectrum of trust. Brandon said that the higher the level of trust, the more access someone gets. I asked, “access to what?” to which Brandon replied, “The Driscolls because they are at level 10“. Once again, It’s All About the Driscolls.

And now you know some of what I did on Twitter today. Yes, there was more.