My thanks to Cheryl Watson, a former ARBCA church member, for following the Thomas Chantry case very closely over the past several years and providing me with many Court documents. She has posted a good article concerning this most recent news at her blog, which can be viewed here.

Allow me to briefly bring you up to speed on the Thomas Chantry case.

On May 12, 2019 Thomas Chantry was found guilty on 4 counts of molestation of a child (Read this post for more details.)

On July 19, 2019 Thomas Chantry “received the maximum possible sentence of 24 years for each of the 4 counts of which he was found guilty. The sentences will be served concurrently, which means that he will serve 24 years. The sentences must be served in full, so he will serve the full 24 years (minus 404 days of pre-trial credit).” (Read Cheryl Watson’s post here for further details.)

On February 25, 2021 the Arizona Court of Appeals reversed the conviction of Thomas Chantry on four counts of molestation of a child and remanded the case for a new trial. (Read this post for more details.)

A third trial was to begin May 10, 2022 but on May 2, 2022 the Yavapai County Deputy Attorney, Susan Eazer, filed the following motion:

MOTION DISMISS WITHOUT PREJUDICE by Todd Wilhelm on Scribd

Attached to this motion was a statement written by the victim:

Based on the above motion Judge Krista M. Carman filed the Order Dismissing Case Without Prejudice. (See below.)

What does “Dismissed Without Prejudice” mean?

“When a judge dismisses pending criminal charges, the case is either dismissed with prejudice or dismissed without prejudice. The character of the dismissal makes a significant difference to both the defendant and the prosecutor.

Dismissal of a criminal case may occur before, during, or after trial. It may be the result of a motion to dismiss by the prosecutor or by the defendant, or due to a determination made by the court without a motion from either party.

In the dismissal context, the term prejudice refers to whether the court has made a final determination on the case. The prejudice relates to the prosecutor’s ability to pursue the charges in another subsequent proceeding.

Reasons for Dismissal With Prejudice

Other errors in a case also may lead a court to dismiss a case with prejudice. Dismissal with prejudice also may occur for other reasons, such as a defendant who enters and successfully completes a local diversion program.

Reasons for Dismissal Without Prejudice

While a dismissal without prejudice allows the prosecutor to refile charges, there will be some cases in which no more charges are filed. For example, if the statute of limitations on the criminal charge expires or the investigators cannot find additional evidence to resolve the issue that led to dismissal, the prosecutor may not file new charges.” 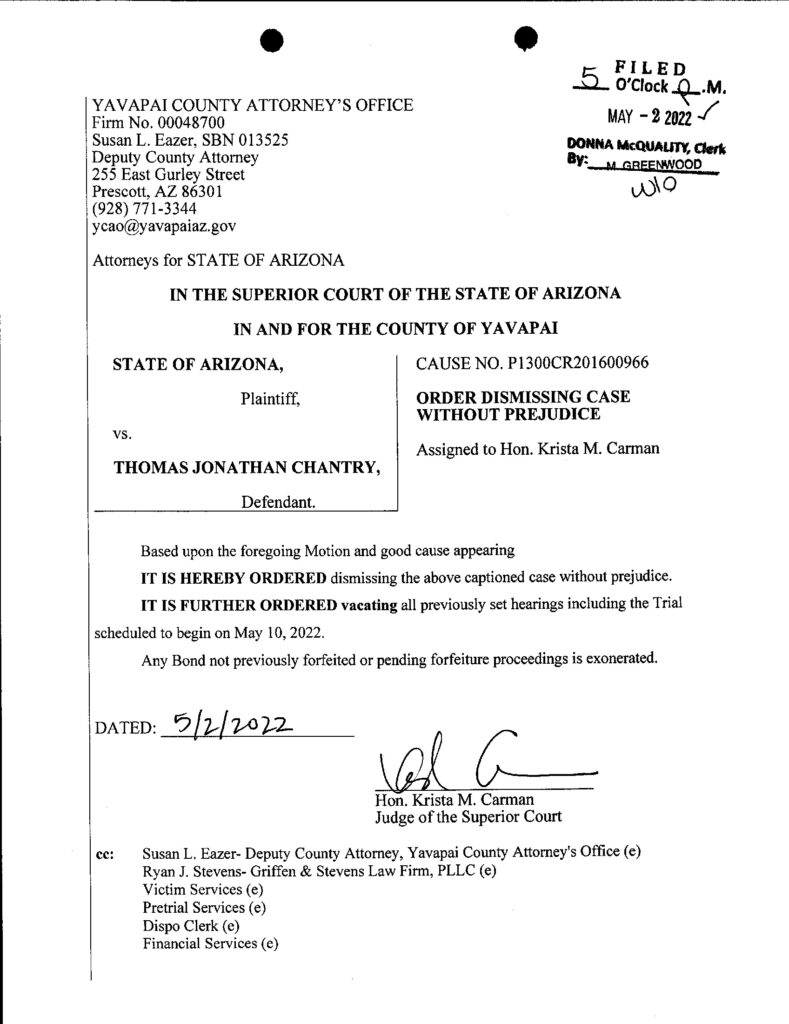 So what is my take on this?

First, I totally sympathize with the victim in this case. I was at both trials and witnessed the victim testifying. It was gut-wrenching to watch. I have some understanding of how tough it was, but I don’t think we who have never been on the witness stand and had to re-live the experience of physical and sexual abuse can fully comprehend just how traumatic it is. I understand not wanting to testify for a third time.

Second, I think the Yavapai County Attorney’s Office made the right choice in not compelling the victim to testify a third time. This was a compassionate decision.

Third, I believe and stand with what the victim said in their statement above – “he (Thomas Chantry) is guilty of everything which I have accused him.”

Fourth, 23 of 24 jurors believed the victim and voted to convict Thomas Chantry of 4 counts of molestation.  The one juror who did not vote to convict in the first trial was convicted of perjury in the jury selection process.

Fifth, I support our legal system – even when I am disappointed by the rulings handed down. I am no expert in law, but, as much as it pains me to say it, if things in Chantry’s trial were contrary to the law, then it was proper that the verdict was set aside and he was granted a new trial.

Seventh, ARBCA has been reduced from a high of about 85 churches to 13. Many members have left the churches that remain.  This is, in my opinion, a direct result of the corrupt men that were in leadership positions in ARBCA and worked to coverup the Chantry scandal.

“If anyone causes one of these little ones—those who believe in me—to stumble, it would be better for them if a large millstone were hung around their neck and they were thrown into the sea.” -Mark 9:42 NIV.

Ninth – God is compassionate, merciful, and gracious.
“Rend your heart and not your garments. Return to the LORD your God, for he is gracious and compassionate, slow to anger and abounding in love, and he relents from sending calamity.” – Joel 2:13 NIV.

Tenth – Our world is a cruel and twisted place.

The publication of this article has emboldened one of the few remaining supporters of Thomas Chantry to submit two anonymous comments. I will not be approving the comments but I did want to address the following statement he made in one of his comments:

If Thomas Chantry’s friend would like to forward evidence of his charge I would be happy to look at it. In the meantime I provide court documents to support my claim.

The last page of this document contains a letter from a juror in the first trial that supports my claim that 23 of 24 jurors believed Thomas Chantry sexually molested victim MJ.  The first trial had a hung jury on the 4 counts of sexual molestation. To convict the vote must be unanimous. This juror stated that “I believe we could have come to a guilty verdict on all the other charges were it not for one juror.”  The 4 counts were retried in a second trial and Thomas Chantry was found guilty on all 4 counts. By my math that makes 23 of 24 jurors believed Thomas Chantry sexually molested MJ.