I included this video because it allows you to verify that J.D. Greear and Bruce Ashford are good friends and roomed together in college. I think it is also useful to display another passionate rant by a celebrity Christian against “discernment bloggers.” Ah yes, it’s old “Ahab” Greear who, when he reads another blog article revealing he has hired a corrupt elder he screeches, “Is that you, you troubler of Israel?” If we could only have unity! Translation – you discernment bloggers need to shut your pie-holes. 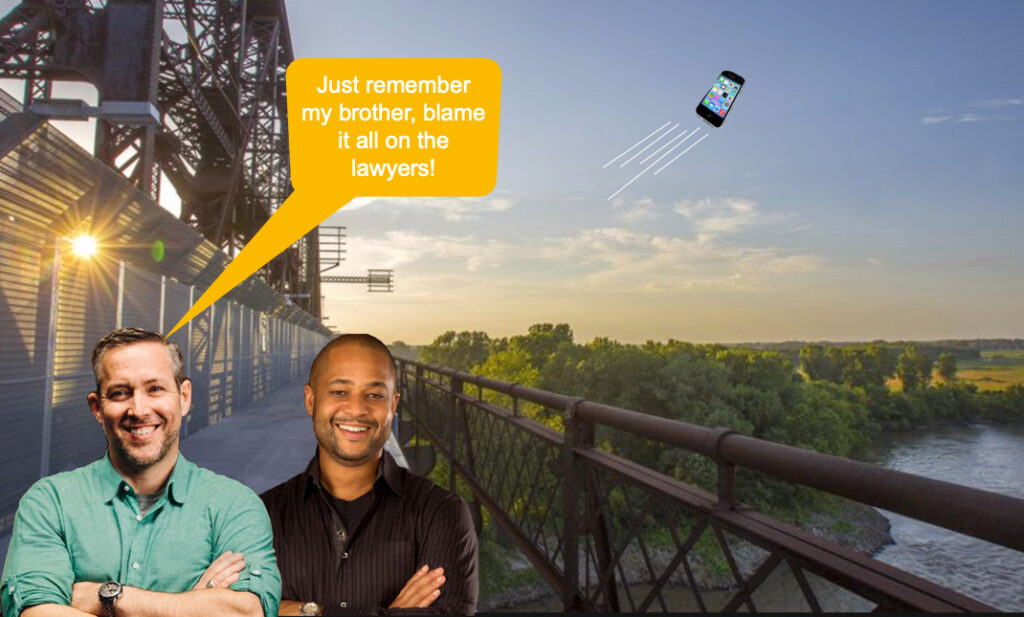 But I digress. On to the video:

On August 9, 2021 Dee published an article titled, “Where’s Bruce Ashford? Did They Give Him a Cake?”

In her article Dee documented the fact that Bruce Ashford and J.D. Greear were college roommates and Ashford was an elder at The Summit Church, where the Senior Pastor is J.D. Greear. At some point we believe Ashford was removed from his position and we do not believe there has been an official, public statement released giving the reason for Ashford’s removal. That’s what builds unity, 1 Timothy 5:20 be damned! (“But those elders who are sinning you are to reprove before everyone, so that the others may take warning.”)

Below is a quote taken from Dee’s article:

Here is part of his bio from BruceAshford.net.

I knew that American Christians needed to find ways to witness to Christ not only in private via interpersonal conversations but also in public via education, politics, art, and entertainment. I knew that I wanted to spend the rest of my life motivating and equipping Christians to be public witnesses. I sensed that the best way for me to do that was through higher education.

So I enrolled in a Ph.D. program in Theological Studies. In 2003, I completed the Ph.D., defending my dissertation on a philosopher named Ludwig Wittgenstein. I was hired to teach philosophy and History of Ideas for the undergraduate program at Southeastern Baptist Theological Seminary (SEBTS). Today, I remain at SEBTS as Provost and Professor of Theology & Culture.

Except, he hasn’t remained Provost as far as I can tell.

Dee also established the fact that Ashford resigned from his job of Provost at Southeastern Baptist Theological Seminary in the summer of 2020 and was shifted to a full-time professor at the SEBTS. In the middle of Ashford’s first semester of work as a full-time professor (October 2020) Ashford’s employment at SEBTS came to an abrupt end. Again, we can find no official reason given for this, nor does there seem to be an email to the staff claiming another “resignation.”

Danny Aiken, the President of SEBTS, has remained noticeably quiet on the termination of Bruce Ashford.

Here is a screenshot I took from Bruce Ashford’s CV. You will notice that he honestly states the dates of his employment at SEBTS. 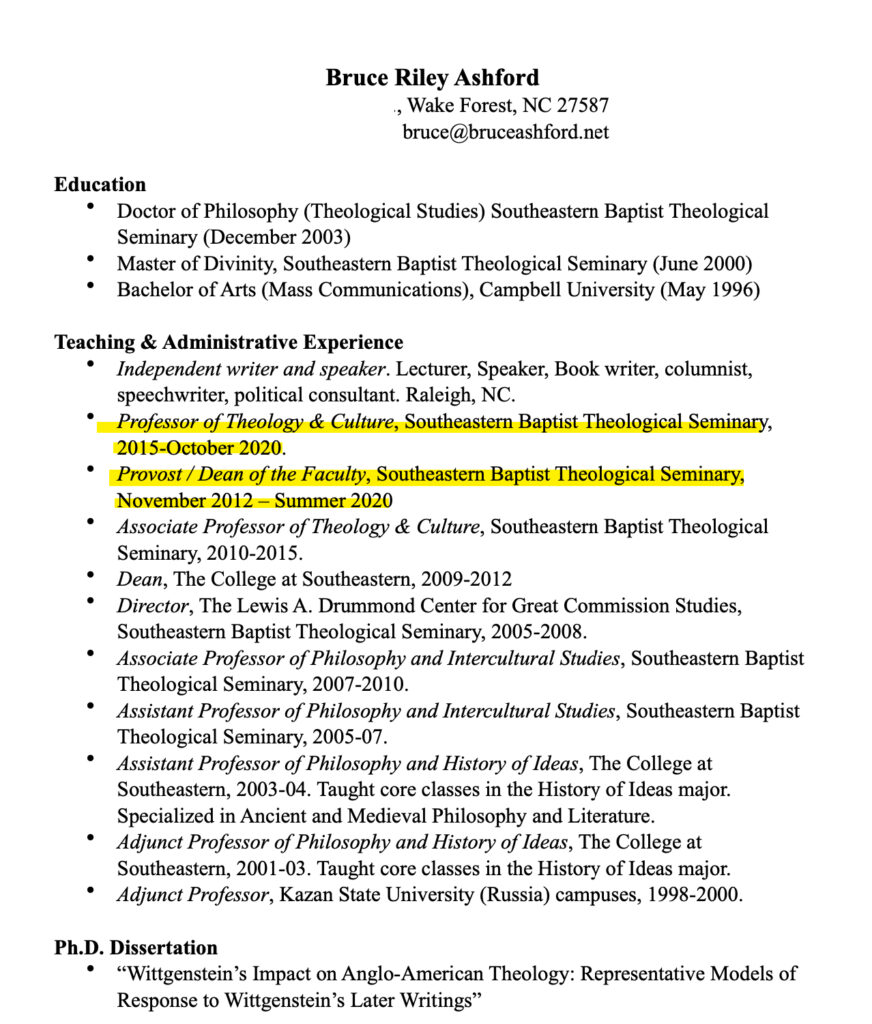 I continue to keep an eye on Bruce Ashford and I recently checked his personal blog. I was stunned to see that in his bio he still claims to be the Provost and a professor at SEBTS. I wrote him the email below, and he responded the following day. 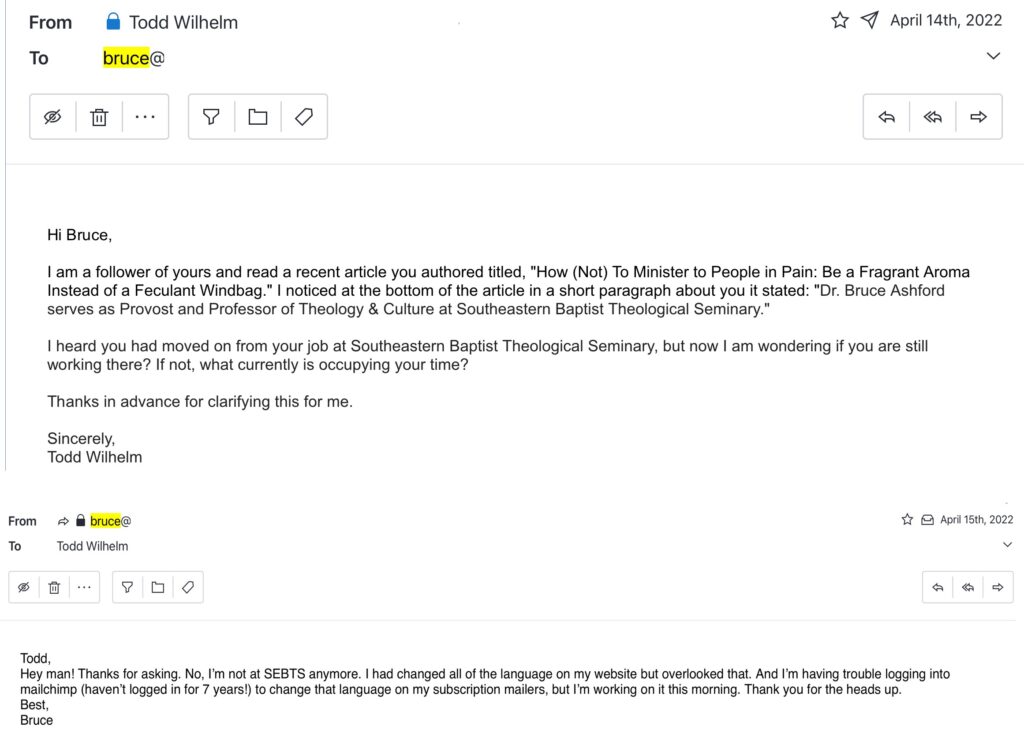 So, Ashford was terminated from all employment at SEBTS in October 2020.  Eighteen months later his blog continues to state he “serves as Provost and Professor of Theology and Culture at Southeastern Baptist Theological Seminary.”  I guess I should cut  Ashford some slack.  As a fellow blogger I realize how difficult it is to delete a sentence from a bio.  I did find it encouraging that Ashford thanked me for the “heads up” and said, on April 15th, that he was “working on it this morning.”

I checked his blog this morning, 5 days after he was working on it, and nothing has changed. Oh well, as they say – Rome wasn’t built in a day. 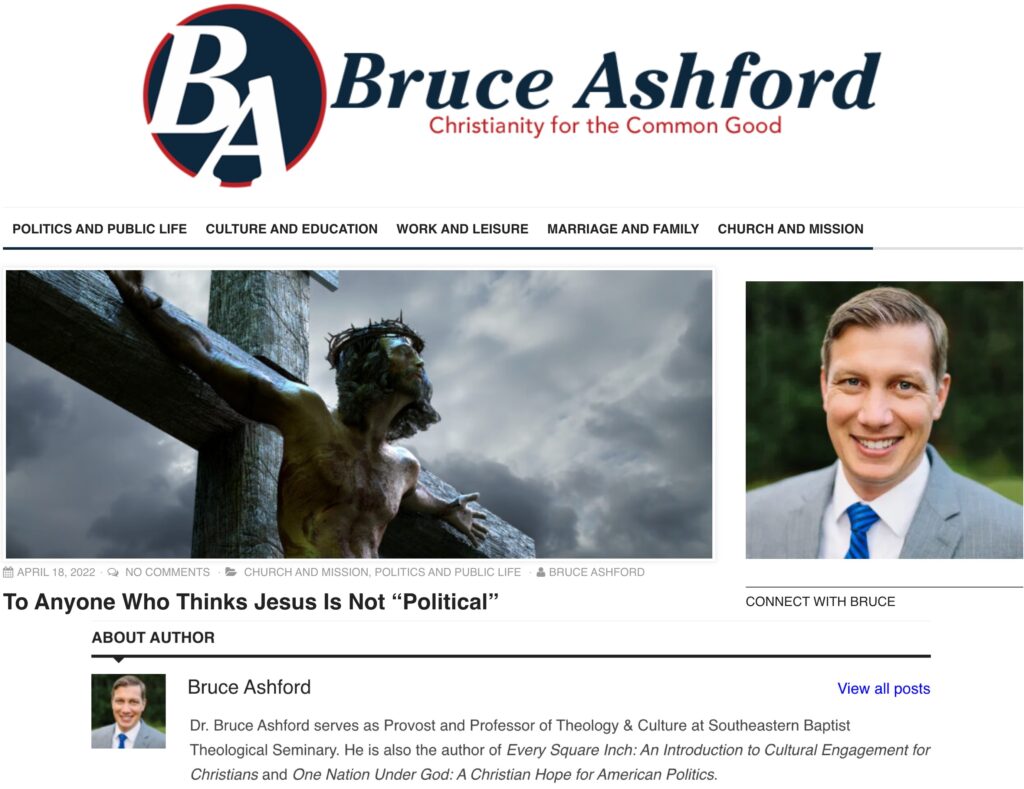