I have never met Marybeth Arnold or Amanda Hodson, but I have followed their story since 2018 and admire them greatly. They have waged an arduous battle in an attempt to bring Ben Cole to justice for sexually abusing them and also to keep Cole from sexually abusing other young girls.

While both of their lives have been permanently impacted in many negative ways because of what Cole did to them when they were young teenagers, they had the satisfaction of seeing Cole convicted on Friday, February 11, 2022 and sentenced to nine years in prison. 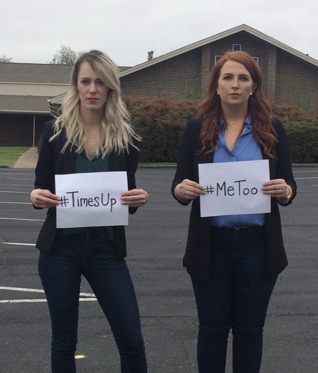 Marybeth’s brother, Peter, was kind enough to inform me of the decision on Friday and said:

He [Ben Cole] got 4.5 years for each count and the judge has him serving them back to back, so 9 years, but he gets credit for 2 years he’s served awaiting trial. Technically this was only for what he did to Amanda even though Marybeth was a corroborating character reference. What he did to Marybeth was not as severe and would be harder to convict. The state is not pursuing her case and everyone feels that justice has been served!

Further details of the case can be read in the Fort Worth Star-Telegram in an article titled, “Man who sexually abused two teenage girls from Mansfield church sentenced to 9 years.”

What I want to briefly touch on is the unhealthy group of churches that have a well documented history of leadership covering up sexual abuse in their churches. I am speaking of ARBCA (The Association of Reformed Baptist Churches of America).  This Association once numbered over 80 churches, but saw their numbers decimated after they staunchly defended Tom Chantry and he was convicted in two trials of physical and sexual abuse of children. [Note from editor – Chantry’s conviction in his second trial was recently overturned on appeal and he will be facing a third trial.]

ARBCA now consists of a mere 13 churches. One of these is Heritage Baptist Church of Mansfield, TX. This is the church Ben Cole, Marybeth Arnold, and Amanda Hodson attended. (There were others Cole targeted.) Cole was a legal adult. The girls he abused were minors.

Peter Arnold wrote a concise review of Heritage Baptist Church nearly 4 years ago. (See below.) Larry Vincent is no longer the senior pastor. I have heard reports that his health is failing. Jarrett Downs, a former Police Officer, is now the senior pastor. Steve Garrick planted another ARBCA church and Matt Vincent, son of Larry, is a pastor there.  Price Jones is the other pastor at Heritage. Jones is the son-in-law of Larry Vincent and is the man Peter refers to in his review. 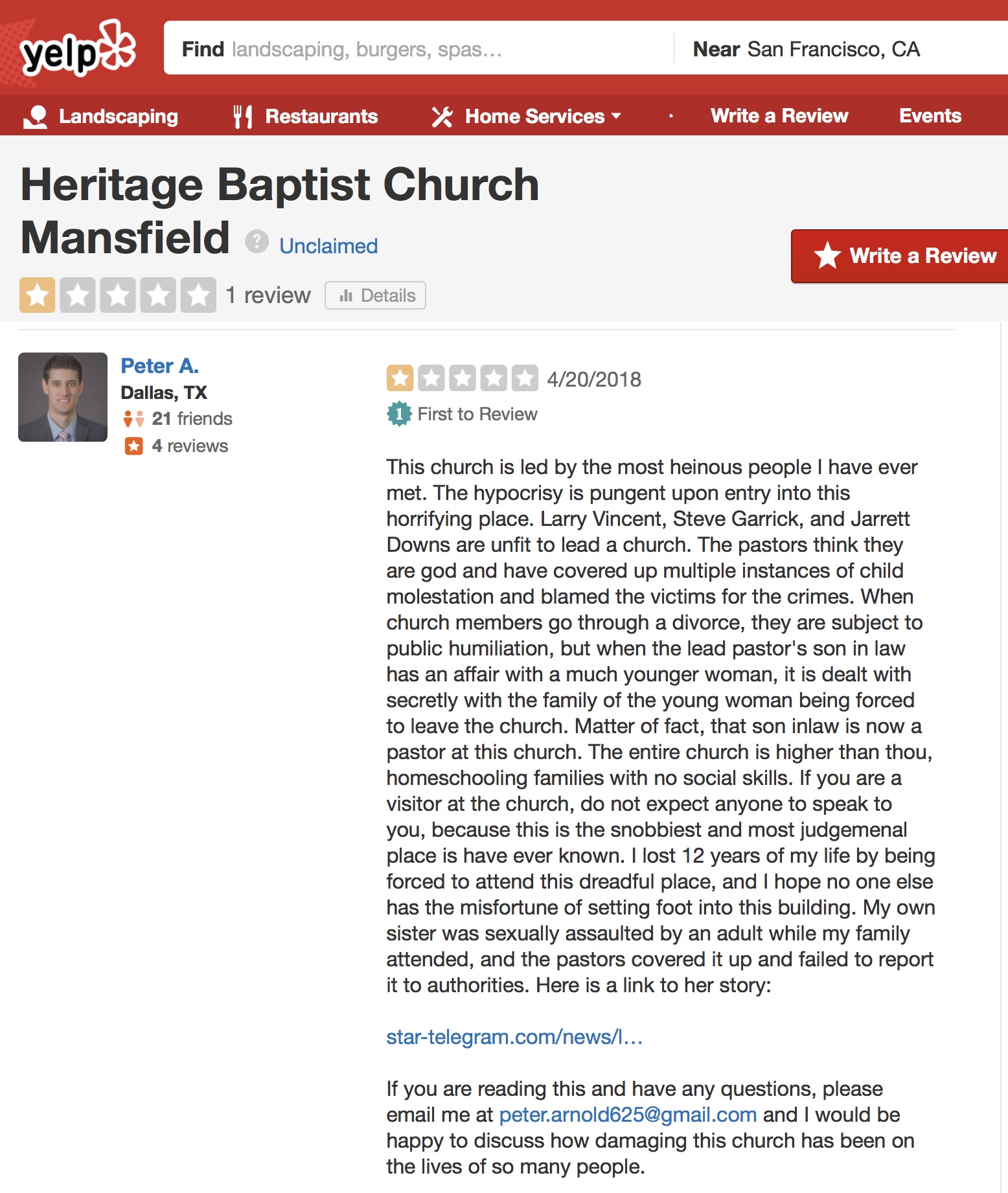 Here is a statement Heritage Baptist Church sent to the Fort Worth Star-Telegram in 2019. 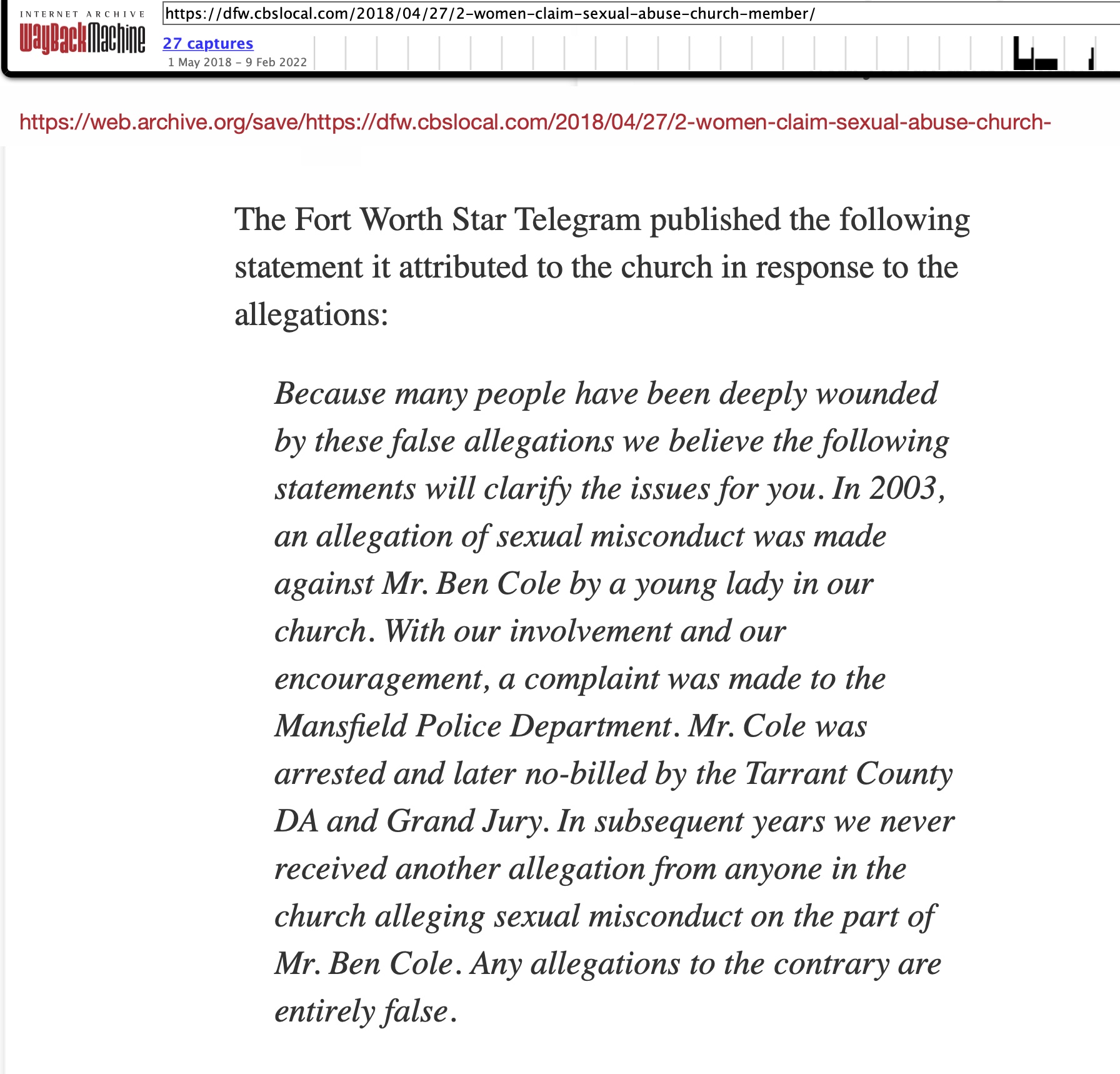 This statement appears to be inaccurate.  Read on.

“She [Amanda] said her father said he’d make some phone calls, which she now realizes was to the church’s elders. She and her dad were later brought before the three elders [Larry Vincent, Jarrett Downs, and Steve Garrick] in a closed-door meeting in the fall of 2005. She remembers the elders asking her questions about what she had done to encourage Cole’s actions.

“It was basically just all this counseling about why I should be ashamed for my part in it,” she added.

And they said, “Don’t talk to anybody about this. We will handle him. We will discipline him; that’s not up to you.’”

Amanda said what infuriates her now is knowing the pastors were aware that Cole had been involved with two other underage girls before her.

“The fact that they didn’t jump out of their chairs right then and pick up a phone and call police is what now just sickens me,“ she said.

Even more troubling, she said, is that one of the pastors, Jarrett Downs, was a police officer, working with the Burleson Police Department between July 2004 and June 2008.

Yesterday I sent an email to Paul Hodson, the father of Amanda. I have not received a reply and am doubtful I ever will. Should Paul decide to write me at some future date I will gladly post his response here. Below is a copy of the email I sent him. 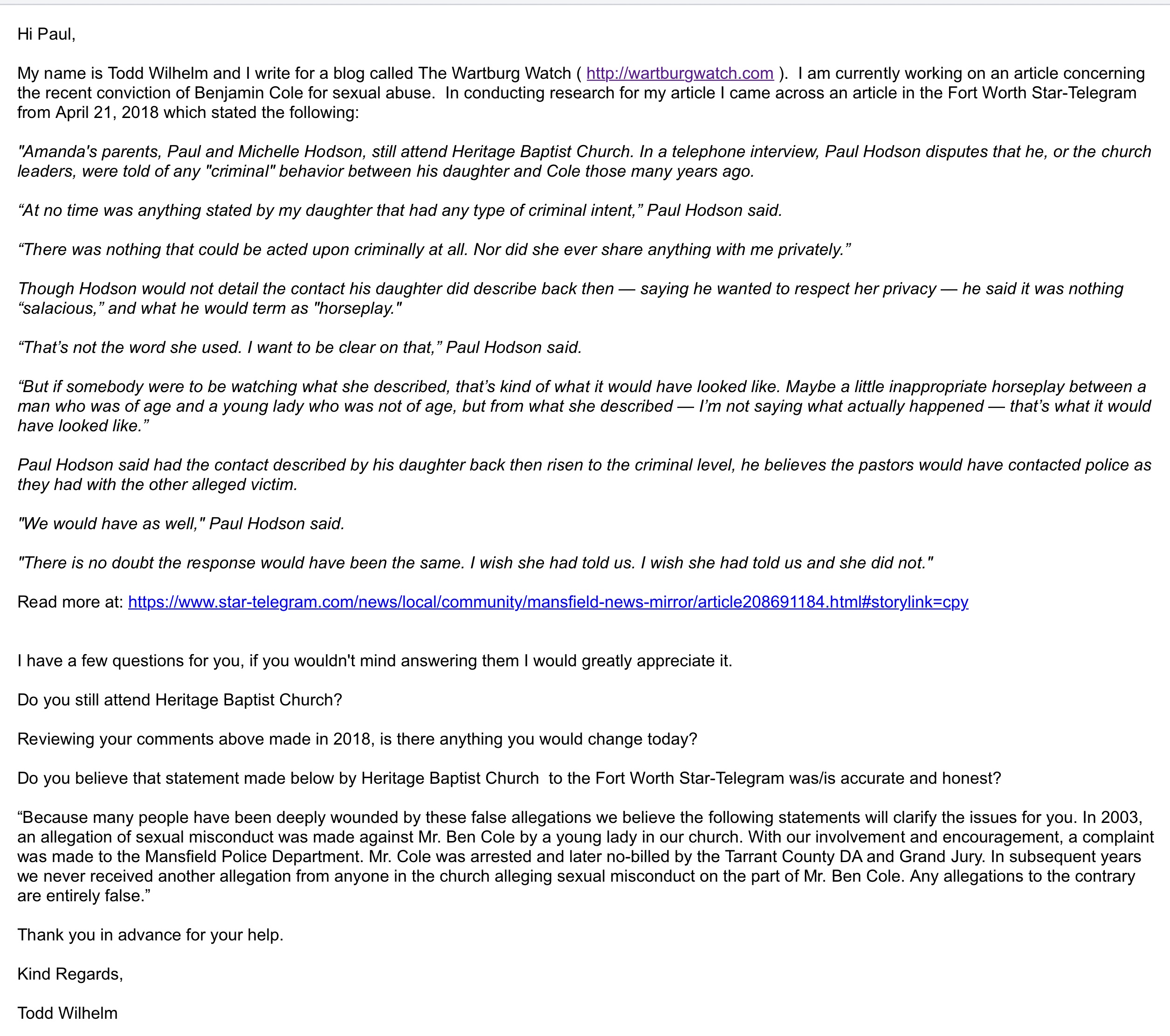 I don’t pretend to know all that has transpired between Amanda and her parents, perhaps their relationship will never be restored. That said, I must question why, at the very least, Amanda’s parents still attend Heritage Baptist Church. In my opinion they have clearly lied in their statement to the press concerning Ben Cole.

[Note from editor 2/14/2022] I received the following update from Peter Arnold today. Unfortunately, I believe it provides a valuable insight into the character of Amanda Hodson’s parents. I can only hope their behavior isn’t reflective of all who attend Heritage Baptist Church because I find their behavior despicable:

“One thing to note about the Hodson parents is that they were in attendance [at the trial] scoffing and whispering when witnesses were testifying. After I left, the judge publicly admonished them. Here is how one person I know who was present described that moment:

“They were scoffing and making noises, obviously in disagreement with you and Marybeth. The judge sent the jury out and then publicly pointed at [Amanda’s] parents and yelled at them. He said it had come to his attention they were being distracting and trying to sway the jury and [intimidate the witnesses]. He told them he would charge them and lock them up today if he heard anything from them again and then he yelled at them, “if you can’t control yourself get out right now.””

I watched the entire Heritage Baptist Church service this morning. Trust me, it was painful. I would estimate there were 50 people in attendance. I would guess Jarrett Downs and Price Jones were aware of the verdict in the Ben Cole case.  Yet not a word was said about it.  I am not surprised. From what I have seen, being a leader in an ARBCA church means never having to say you were wrong, nor do you ever need to publicly say you were sorry for publishing a false statement to the media.  I did see Price Jones carry on for nearly 15 minutes in his pastoral prayer, most of it confessing we are all terrible sinners and worms in God’s sight, etc. But I would think his time would have been better spent first making a public apology.  Then again, what do I know? Conduct your church service and your service to God as you see fit.  Fortunately, in my opinion, there are only a handful of deluded people paying to listen to your hypocrisy.

On a final note, in considering “who is ARBCA” please remember that in the last days they (congregations) will accumulate for themselves teachers in accordance to their own desires” (2 Timothy 4:3). The corrupt men of ARBCA did not become who they are by themselves. The members of ARBCA churches allow these rogues to do whatever they please. Pray for the eyes of the members of ARBCA churches to be opened to the truth of this corruption.

Source: Awareness in Reformed Baptist Churches of America, “Who is ARBCA?”

“Often the leaders do not want their followers to even consider information. Attacking the motives and credibility of a critic is an effective way to accomplish this. When members are conditioned by leaders to believe that information is credible only if the source of that information is acceptable, it is unlikely followers will seriously consider anything said by those ridiculed by the leaders. These victims become putty in the hands of these leaders.”