“In researching this book I have had first-hand accounts from several of John Smyth’s victims. I have also had access to court documents, church records, letters to and from John Smyth, historic material from Iwerne camps and Zambesi Ministries, as well as scores of conversations with people who have been affected by the Iwerne movement over half a century. Some of this has been hard work. Even now, there are people who would prefer that this story was not told. Sometimes that is because they carry shame from what they have done, or what has been done to them. For others, the call to live out the gospel in the form in which it is represented by the Iwerne movement is of such overwhelming importance that they feel that furthering that work is more important than telling the truth about it.

In Zimbabwe, John Smyth was charged with abusing 90 boys. Most of them will never be known. The names and number of Smyth’s victims in South Africa remain unknown as yet, except to God.”

-Andrew Graystone. “Bleeding for Jesus: John Smyth and the cult of the Iwerne Camps” (p.8-9). 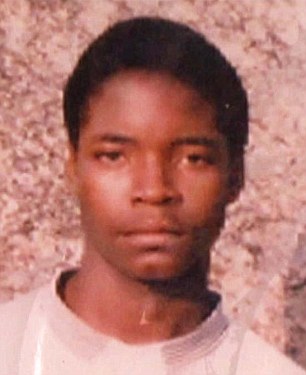 On the morning of December 15, 1992, twenty-nine years ago, Guide Nyachuru’s naked body was found floating in a swimming pool at a camp run by John Smyth of Zambesi Ministries. PJ Smyth, then 22 years old and the son of camp director, John Smyth, was one of three counselors looking after the boys assigned to the Chancellor dormitory. Guide Nyachuru was assigned to the Chancellors dormitory.

Here is a clip taken from Channel 4 News of the UK. Cathy Newman is the reporter. This story was aired in 2017.

The following two paragraphs can be found in Wade Mullen’s recently released report on PJ Smyth. As notated in his report, this material was quoted from Andrew Graystone’s very informative book, “Bleeding for Jesus: John Smyth and the cult of the Iwerne Camps”

“Guide was placed in a dormitory called Chancellors with seven other boys and three leaders: PJ Smyth, Paul ‘Spike’ Milligan and Dion Floquet. After an introductory safety talk by the Adjutant, Andrew Ellis, the boys were divided into three groups. What happened during the following 12 hours is unclear. After dark, PJ told the boys they were going skinny-dipping in the outdoor swimming pool. This involved leaving their clothes in the dormitory and walking naked to the pool, which was surrounded by a low wall. The boys were accompanied by their dormitory leaders, but John Smyth later said in evidence that he wasn’t present at the pool, or in the dormitory that night. In typical Iwerne fashion each boy had a partner whose job was to keep an eye on them. Guide Nyachuru was partnered with Mandla Nyathi, an older boy from Plumtree School who he had met for the first time that day. Nyathi was probably the last person to see Guide Nyachuru alive.

At 5 a.m. next morning, the whole camp was woken by a bell. They were told that a boy was missing. Sure enough, Guide’s bed was empty. It hadn’t been slept in. He had been missing all night. Tendai, who was one of the dormitory leaders, was woken up by John Smyth. He was in a flat panic. ‘Tendai, something terrible has happened.’ Then one of the school staff called out, ‘There’s a body in the pool.’ All the campers ran to the pool to find a naked black body floating lifelessly in the deep end. Two senior leaders dived into the pool and pulled him out. His skin was grey. He had clearly been dead for hours. One witness reports seeing bruises on his legs and groin. ‘He’s from your dormitory, isn’t he?’ Smyth said to Tendai. He wasn’t. He was in Chancellors.”

I find several things odd about this incident. First, John Smyth poses a question to Tendai – “He’s from your dormitory, isn’t he?” Was Smyth honestly confused, or was he attempting to subtly change the narrative, hoping Tendai was uncertain what dormitory Nyachuru had been assigned to?

Second, what about the bruises to Guide Nyachuru’s legs and groin?

Third, I find the ratio of campers to dorm leaders very low. There were eight campers in the Chancellors dormitory and 3 leaders! I attended several camps in my youth and to the best of my recollection we had 12-20 campers in our cabin with only one leader.

Fourth, all the camps I attended had a strict “buddy system” in place. We always swam in pairs and whenever the lifeguard blew his whistle we immediately paired up with our buddy.  Prior to entering the water there was a number count of pairs and upon leaving the water buddies were paired up again and counted to make sure the same number that went in the water came out of the water.  Additionally, the pool was checked by the Lifeguard to make certain there were no bodies in the pool.

Fifth, prior to lights out for the night, our cabin leader checked to make sure everyone assigned to his cabin was present and accounted for.

It seems like these same procedures were likely in place at the Zambesi camp. As we heard in the video, the youth went to the pool with their assigned buddy and walked back to their dormitory with their assigned buddy. John Smyth watched them enter and leave through the gate to the pool. They also had a “lights out” time, (see the quote below taken from Graystone’s “Bleeding For Jesus” book) and I assume the leaders would have been responsible to ensure all their campers were in their beds. 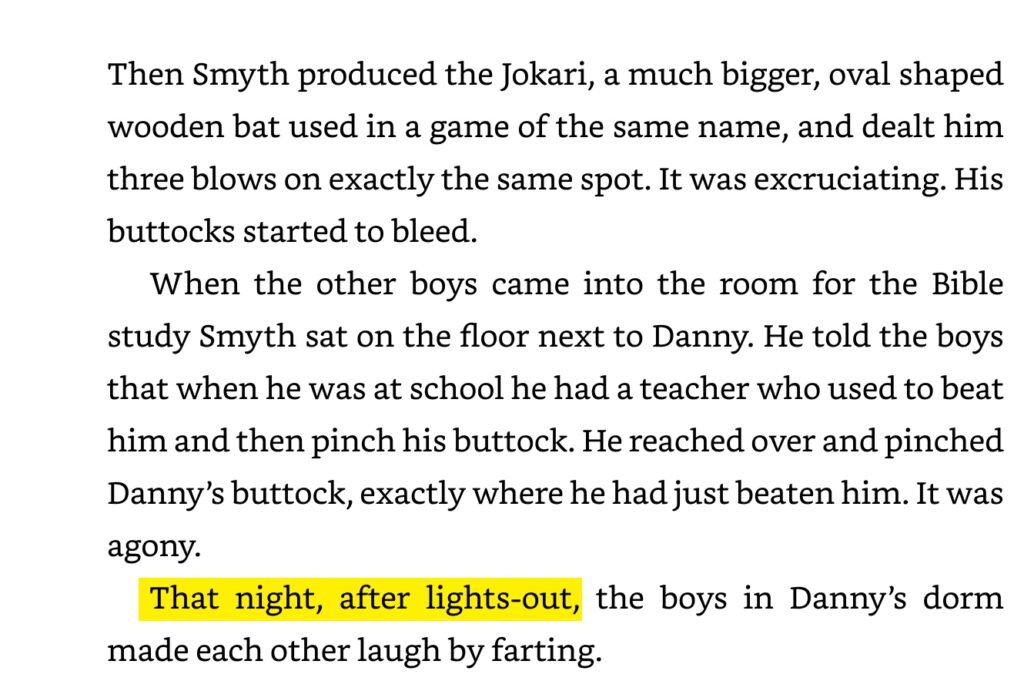 I find it hard to believe that 3 leaders, in charge of watching over 7 youth, would not have noticed Guide Nyachuru was missing.  As we read above, Guide’s bed had not been slept in.

Below is some information from Wade Mullen’s report. You can see how PJ Smyth slightly altered his story concerning the death of Guide Nyachuru 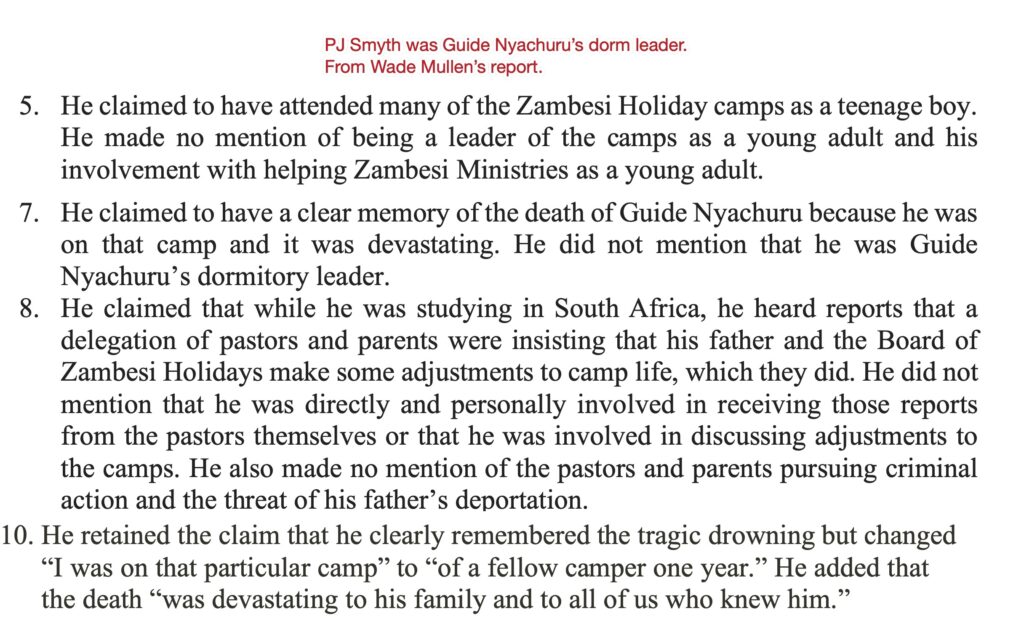 At the end of the day we are left wondering if Guide Nyachuru’s death was an accidental drowning, or whether something more sinister was at play.  Again, I quote from Andrew Graystone’s. “Bleeding for Jesus: John Smyth and the cult of the Iwerne Camps.”

“Over the following months a narrative developed around the events of Guide’s death. Perhaps he fell awkwardly, or hit his head whilst diving, and drowned. Probably, as a country boy from a small school, he wasn’t a good swimmer (though his father and sister later testified that he was). Perhaps he died of heart failure. It had been dark, and his absence wasn’t noticed on the return to the dormitory. All of these are plausible. It is equally plausible that Guide Nyachuru died in some other way, perhaps as a result of an accident whilst resisting assault, and that his body was deliberately placed in the pool, to be found when the sun rose next morning, We will probably never know.”

Finally, if you are interested in reading more about John and PJ Smyth, I highly recommend this book by Andrew Graystone. 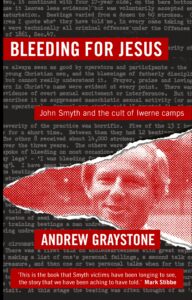