My brothers and sisters, believers in our glorious Lord Jesus Christ must not show favoritism. Suppose a man comes into your meeting wearing a gold ring and fine clothes, and a poor man in filthy old clothes also comes in. If you show special attention to the man wearing fine clothes and say, “Here’s a good seat for you,” but say to the poor man, “You stand there” or “Sit on the floor by my feet,” have you not discriminated among yourselves and become judges with evil thoughts?

Listen, my dear brothers and sisters: Has not God chosen those who are poor in the eyes of the world to be rich in faith and to inherit the kingdom he promised those who love him? But you have dishonored the poor. Is it not the rich who are exploiting you? Are they not the ones who are dragging you into court? Are they not the ones who are blaspheming the noble name of him to whom you belong?

If you really keep the royal law found in Scripture, “Love your neighbor as yourself,” you are doing right. But if you show favoritism, you sin and are convicted by the law as lawbreakers.
-James 2:1-9 (NIV) 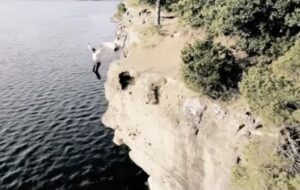 Senior Pastor Alex Himaya encourages BattleCreek Church members to go “All In” for their latest giving campaign by jumping off a cliff.

A Closer Look at Alex Himaya

The bio below is somewhat dated, but useful. Himaya seems to have shifted away from the theChurch.at, now favoring tcSouth, or tcCairo, etc., the tc standing for “the church.” Also, the church in DuPage, IL apparently is no longer in existence. I cannot find any information about it on BattleCreek Church’s website and individuals I have spoken with who are familiar with BattleCreek know nothing about it. 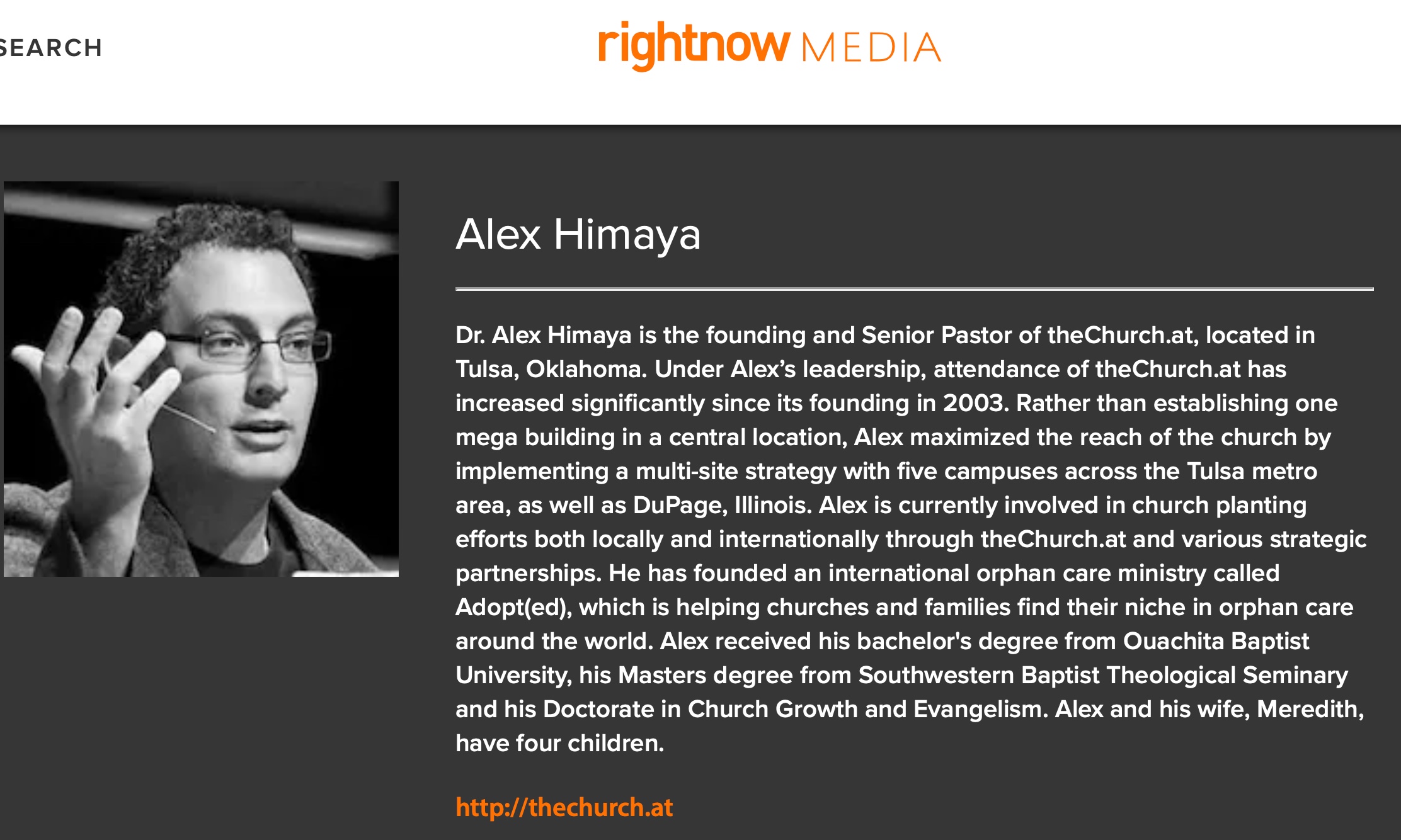 Also note that Himaya reportedly has a doctorate in church growth and evangelism. What I find odd is that nowhere could I find any reference to what institution Himaya earned his doctorate from. This is unusual, as most bio’s list where their doctorate was earned. (See below.) 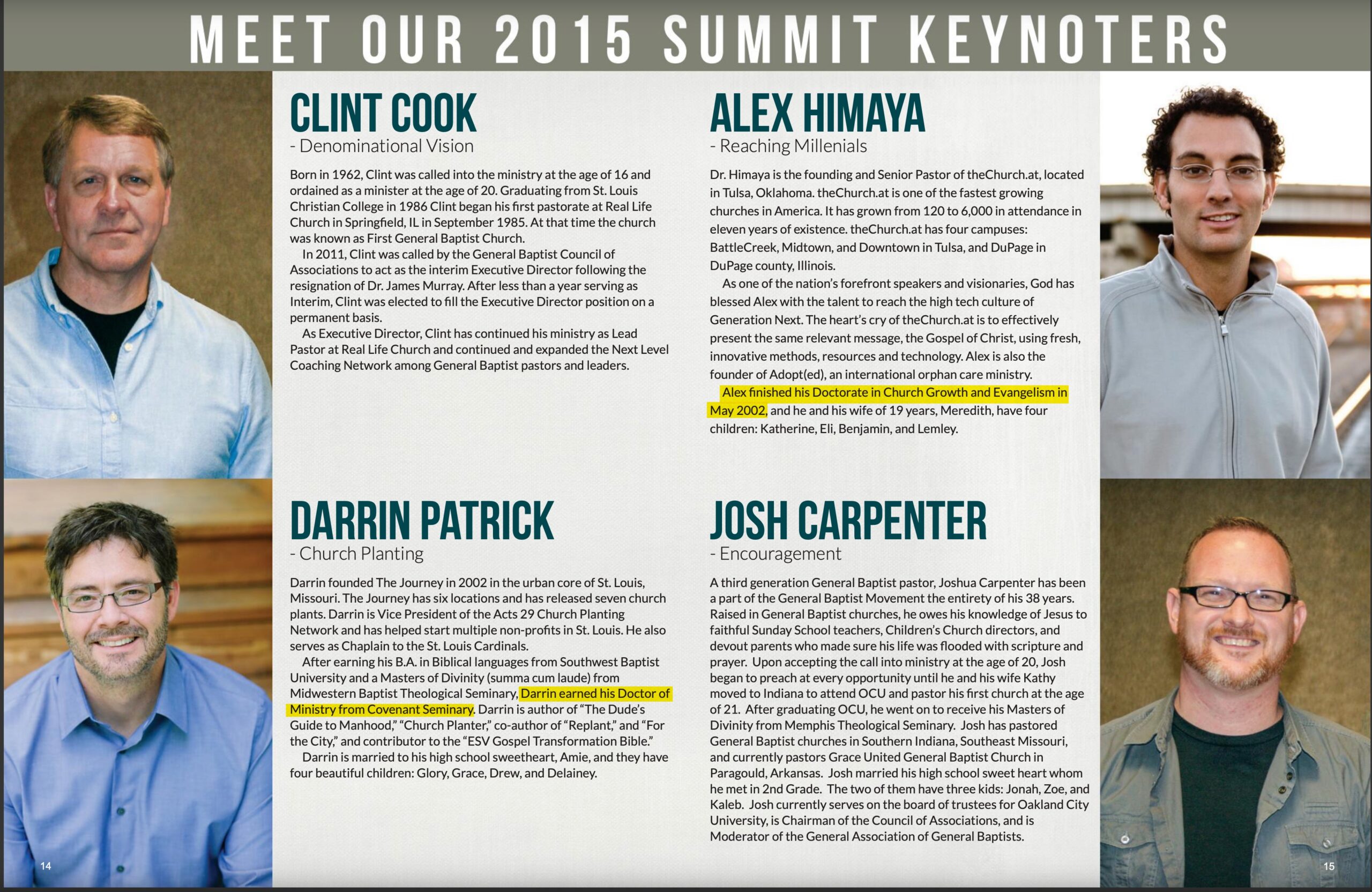 I placed a call to Southwestern Baptist Theological Seminary, thinking that since Himaya earned his M.Div there he may have also earned his doctorate there. The Registar verified that Himaya did, in fact, earn his M.Div at SWBTS, but they have no record of him earning a doctorate there.

I was stymied, so I enlisted the help of an anonymous individual who frequently helps Dee and I find factual data that we have been unable to locate. This individual came through for me and said that Himaya had earned his D.Min. at Midwestern Baptist Theological Seminary. His thesis at MBTS is titled: “Providing early ministerial preparation for God-called students at First Baptist Church of Springdale, Arkansas.”

I submitted a request for a copy of Himaya’s thesis through Researchgate. In order to receive a copy of the thesis Alex Himaya has to approve the request. It has been about two weeks since the request was submitted and I have not heard back from Himaya, nor have I received the thesis. It’s my feeling that I will not be receiving Himaya’s thesis anytime soon. I would like to know why Himaya claims his D.Min. is on “Church Growth and Evangelism” when the subject was actually “Providing early ministerial preparation for God-called students at First Baptist Church of Springdale, Arkansas.”

Just speculation, but I would guess Himaya received work-related credit towards his D.Min. for the six years he spent as Youth Pastor at Ronnie Floyd’s church.

Next I will bring to light a possible ethical situation that I would like to hear an explanation for. First watch the video below, than I will explain.

To recap, Alex Himaya said, Find a church “that is not so much interested in how many followers they have on Instagram and what kind of a splash they can make in the world, and how many on-line participants they can have, but how many men and women are coming alongside, making a difference in the city that they belong in.”

Now take a look at this: 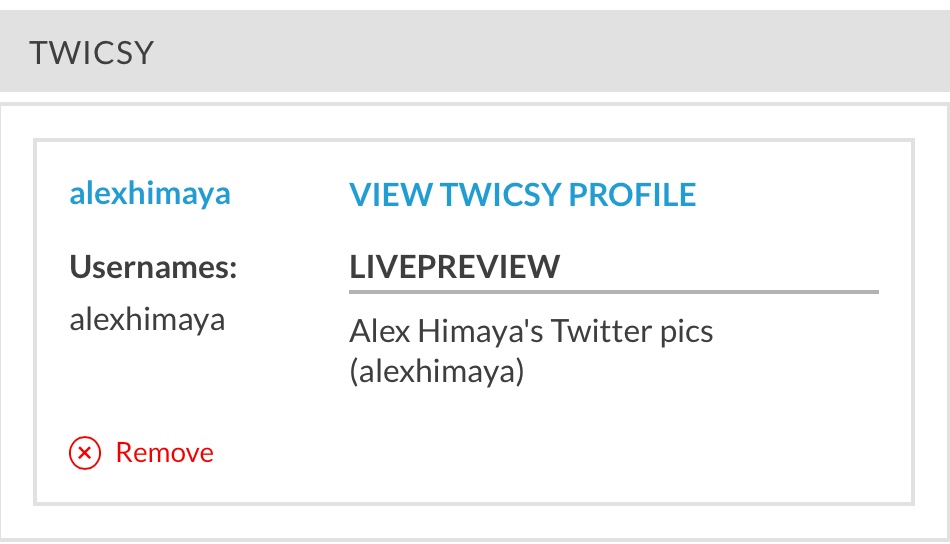 Alex Himaya has a “TWICSY” account. What is a TWICSY account? It is an account used to purchase “likes” on Social Media. It makes an individual look like he has more people liking his posts than he actually does. Therefore, if Alex Himaya has purchased non-existent “likes” perhaps you should take him at his word and find a church where the pastor is not so interested in how many followers he has on Instagram. 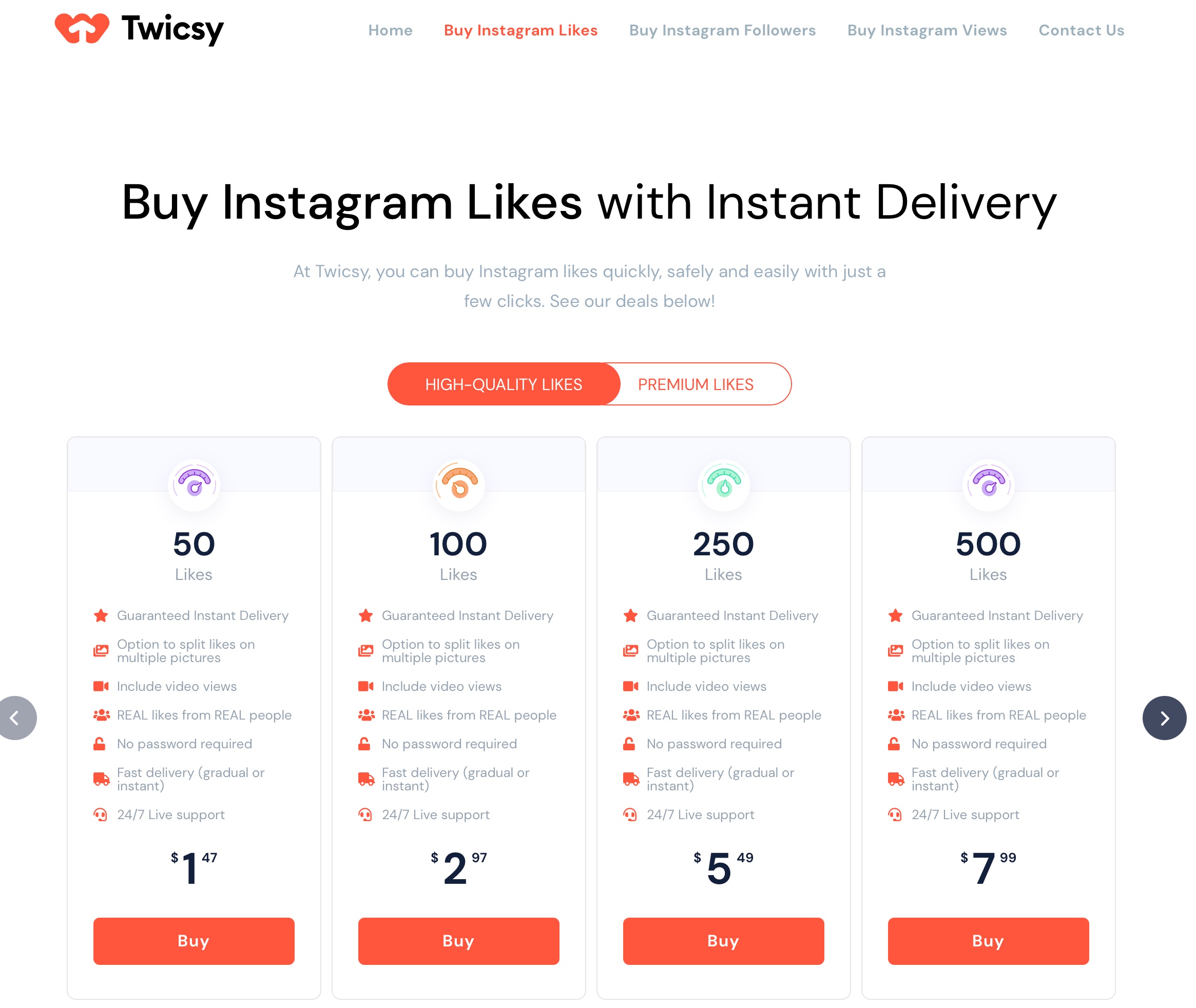 Next, take a look at this glowing endorsement of Chris Colvin by Alex Himaya:

Colvin basically writes sermons for a living. No preacher wants to admit that, so they routinely say the service provided saves them many hours from doing what a pastor is paid to do -prepare and deliver sermons, freeing them up to disciple his underlings while enjoying the great outdoors.

Unfortunately, Himaya still hasn’t freed up enough time to show up at a memorial service  – a woman recently widowed by the sudden and unexpected death of her husband lamented that fact in a comment she left on Himaya’s Facebook post of golfing at a private country club with his wealthy buddy, Mike Baab. The comment was quickly removed, but not before someone grabbed a screenshot of it!

Wild guess here, but it’s doubtful that Mrs. Young will be participating in the “All In” giving campaign. 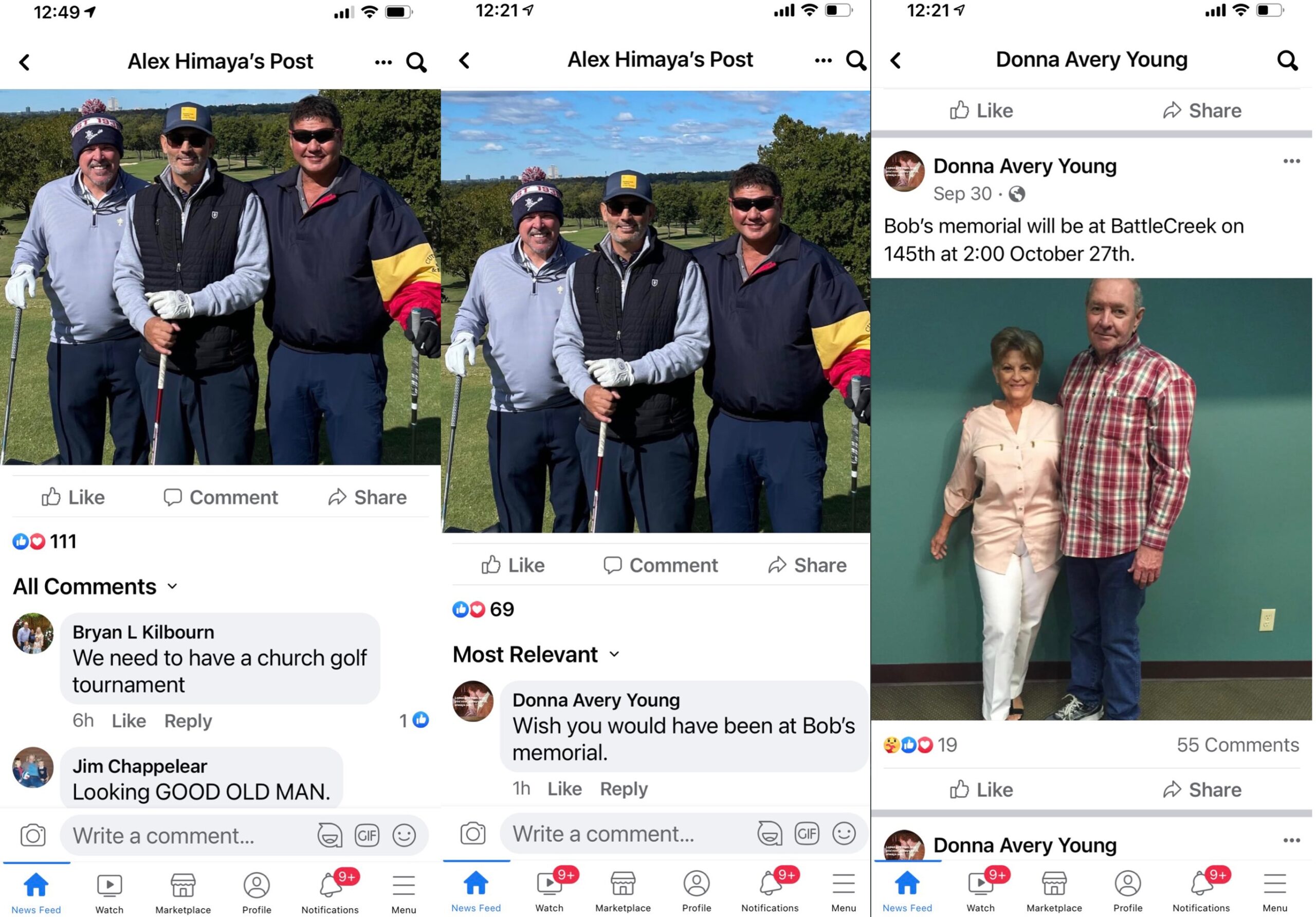 Back to Chris Colvin. I don’t believe he is still employed by BattleCreek Church, but at one time he was in their “communications” department. He may have even been a member of the Pastor’s Council, although I have not been able to confirm that. According to the information below, Colvin now lives in Springfield, MO.

Take note of that big orange button on the screenshot below that says “Contact Me!”  Two weeks ago I utilized that button and asked how much Chris charges to write sermons. I have not heard back from Chris. I’m guessing he’s too busy writing sermons for Himaya and his ilk – no time to respond to questions from the rock-throwing peasants such as me. I was hoping I could enlist Colvin’s services to write a blog post or two for me. I’d be willing to pay him $10 per post! I’m sure that wouldn’t impress him, but it’s $10 more than I earn.

Ah, well. I was so hopeful to have “him by my side so I can increase my capacity 10 to 15 hours or even 20 extra hours each week!”  I would have been able to “spend my time doing other important tasks, like leading my team and casting vision.”

Well, he probably wouldn’t meet my standards anyway. Nowhere in his material did I see him mention “gospel centered,” as in “gospel-centered vision casting.” So I doubt he is even a Christian. He surely isn’t a very winsome fella. 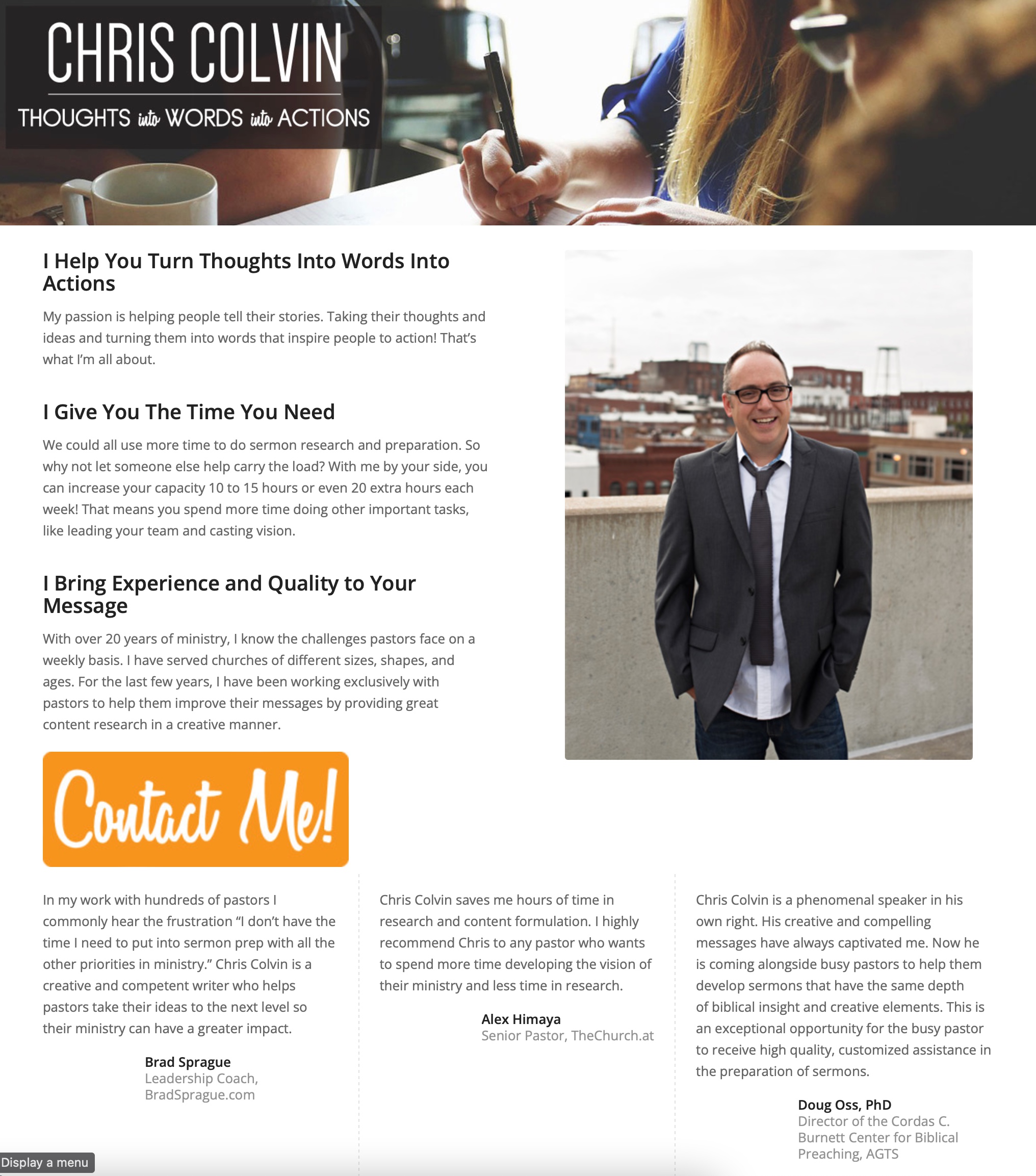 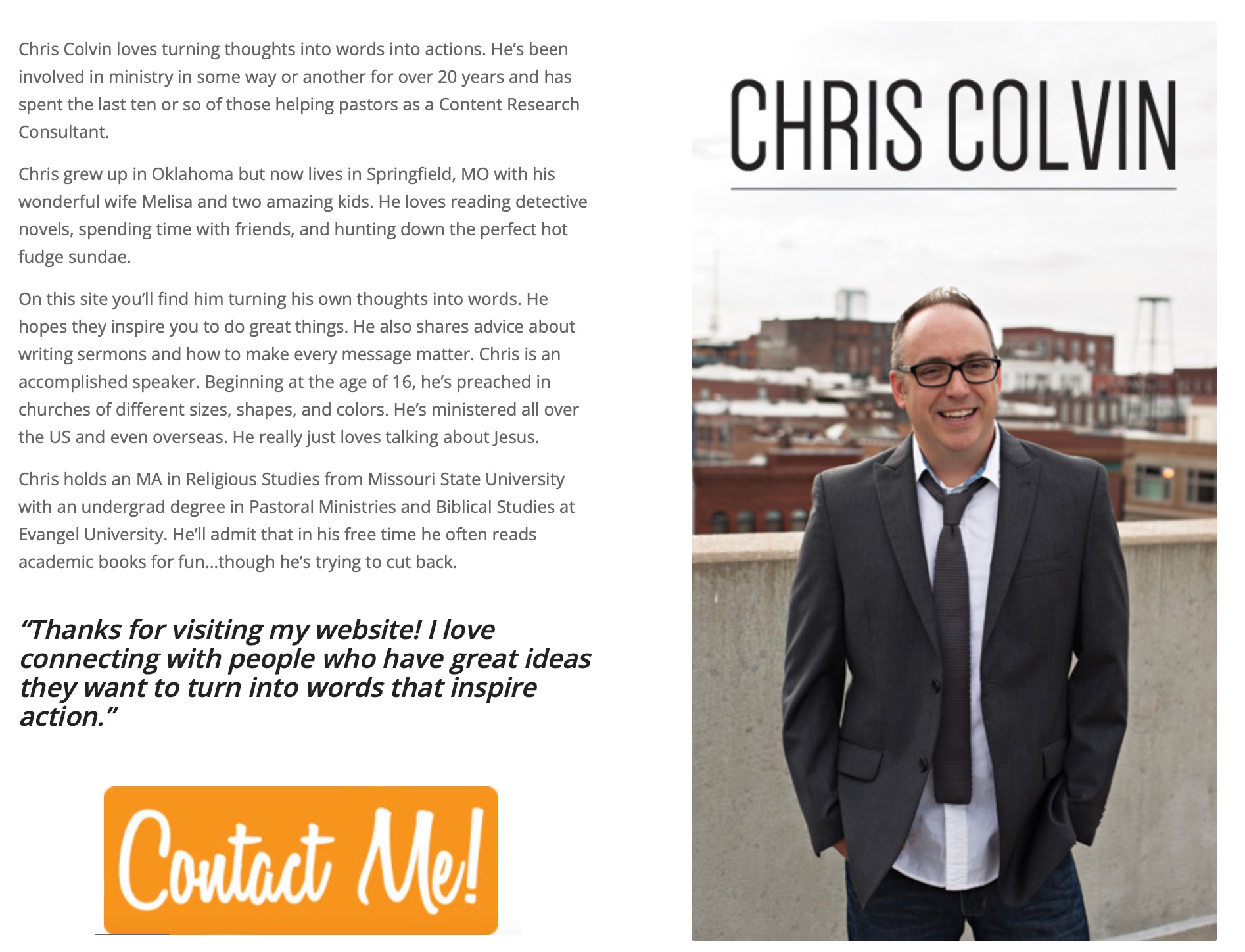 A Closer Look at Generis

Generis is a large consultant group that works with pastors. Their motto is “Accelerating Generosity Towards God-Inspired Vision.”

Translated that means they teach pastors how to effectively squeeze every available penny from church members. Of course, Generis advisors would likely cringe at my crass interpretation of their work, preferring to couch what they do in nice religious language.

One of the heavy-lifters at Generis is Julie Bullock. Obviously intelligent and energized, she is highly praised by her colleagues and customers alike. She is a member of Alex Himaya’s BattleCreek Church and a member of Himaya’s Pastor’s Council; she undoubtedly played a major roll in designing BattleCreek’s current “All In” giving campaign. 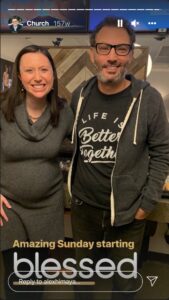 Below is a short video taken from an introduction to Julie Bullock teaching on giving at the BattleCreek Church on November 4, 2018.

In my previous blog there is a video in which two Generis consultants were teaching on the importance of monitoring church members giving. They suggested a software program which tracks donors giving in great detail. This software can alert church staff of first-time givers, givers that have reduced their amount or frequency of giving, and any number of other things. Church staff will then use this as a “pastoral moment” and get in touch with this member.

Below is a video in which Generis employees Jon Bennett and Brad Leeper emphasize to pastors the importance of monitoring members giving.

One thing I find troubling with Generis is the amount of attention they suggest pastors should give to wealthy church members. In my opinion, Generis disregards the exhortation of James (see the top of this post) to not show favoritism to the rich. Watch the short video below for an example of what I am troubled by.

Jesus sat down near the collection box in the Temple and watched as the crowds dropped in their money. Many rich people put in large amounts. Then a poor widow came and dropped in two small coins. Jesus called his disciples to him and said, “I tell you the truth, this poor widow has given more than all the others who are making contributions. For they gave a tiny part of their surplus, but she, poor as she is, has given everything she had to live on.”
-Mark 12:41-44 (NLT)

Below is a screenshot from Generis’ website. I have edited this, but the full article may be viewed here.

Well, it looks like I need a part three in this series. I have plenty more to share, but this post is long enough. Look for part 3 next week.