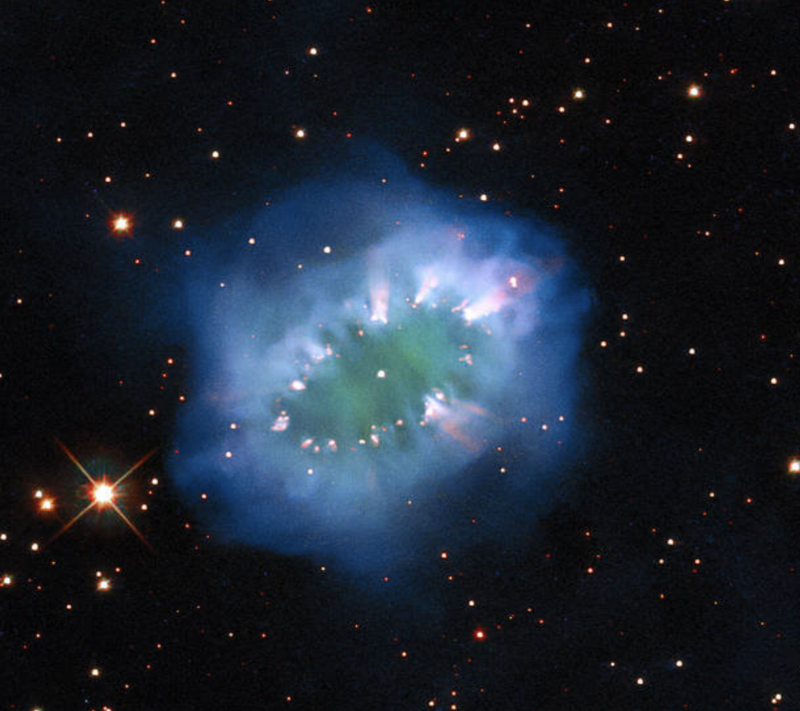 ” The first step to be a good man is this. You must deeply feel the burden of the stones some else is carrying.”  Mehmet Murat ildan

Moderates, hard right, conservative: Do the words really describe what is being said?

If I had been a Baptist and a messenger to the SBC, I probably would have voted for Ed Litton. At the minimum, he’s a truly nice guy, something that couldn’t be said for many candidates, past and present, in my opinion.  Most news reports are calling him a moderate.

The NY Times headlined it as Southern Baptists Narrowly Head Off Conservative Takeover It was subtitled Ed Litton, a moderate pastor from Alabama, won a high-stakes presidential election with the potential to reshape the future of the country’s largest Protestant denomination.

In a dramatic showdown on Tuesday, Southern Baptists elected a moderate pastor from Alabama as their next president, narrowly heading off an attempted takeover by the denomination’s insurgent right wing..

The Washington Post reported Southern Baptists elect Ed Litton as their president, a defeat for the hard right:

Other SBC presidential candidates included Albert Mohler, the president of the Southern Baptist Theological Seminary. In the first round of voting, Mohler garnered fewer votes than Litton and Stone. In a runoff, Litton received 52 percent of the vote, while Stone received 47.81 percent.

Stone had the support of a group called the Conservative Baptist Network that formed in 2020 to try to steer the convention in a hard-right direction. The CBN hosted its own gathering Tuesday at a nearby hotel featuring speakers who lamented the direction of the country and convention, including the state of public schools, how young people are leaving churches, and “woke” ideologies.

Litton defeated rival Mike Stone by 52 to 48 percent in a run-off vote after other candidates were eliminated. The Post said that Stone was backed by the hard-right Conservative Baptist Network, which held its own meeting at a Nashville hotel where speakers complained about “woke” ideologies and delegates wore stickers reading “Beat the Biden Baptists.”

… Ed Litton’s election at the convention’s annual meeting in Nashville was reported by the Washington Post, which described it as “a defeat for the hard-right within the nation’s largest Protestant denomination.”

My thoughts and pushback

This election was not between conservatives and moderates. It was between ultra-conservatives and conservatives. Ed Litton is no moderate when it comes to the SBC. He is a supporter of the Baptist Faith and Message. Here is how he responded when asked about the appointment of women pastors by Saddleback Church.

“Without hesitation or reservation I am a complementarian and I wholeheartedly affirm the BF&M (2000). The Bible clearly teaches that the office of pastor is reserved only for qualified men, and I also want to encourage my sisters in Christ to be equipped, using every gift God has given them for the church and its mission with the gospel.”

It is my opinion that the focus of Litton’s presidency will be on racial reconciliation and addressing the painful problem of sex abuse in the SBC.

It is naive to compare his win to the win of Joe Biden over Donald Trump. This election has nothing to do with politics as carried out on the secular stage. This is a religious matter and should be divorced from national politics although some in the SBC have brought this comparison on themselves, given the last few elections.

For the past six years, he’s been active in a Mobile coalition called the Pledge Group, a movement of leaders from different racial, religious and vocational backgrounds who want to shrink the city’s racial divide.

Litton was nominated for president at Tuesday’s SBC meeting by pastor Fred Luter, who in 2012 became the SBC’s first and thus far only Black president. Luter said he’d known Litton for more than 20 years, initially teaming up to preach on behalf of racial reconciliation.

That cause has been an enduring one for Litton, who has built strong relationships with many Black pastors.

Late last year, racial tensions in the SBC were heightened when the presidents of the SBC’s six seminaries — all of them white — issued a statement repudiating critical race theory, a term used to describe critiques of systemic racism. In response, a diverse group of Southern Baptists, including Litton and Luter, co-signed a statement asserting that systemic racial injustice is a reality.

During his presidential campaign, Litton identified unity and diversity as two of his top priorities.

Washington Post referenced above has this to say about reconciliation.

Litton, pastor of First Baptist Church North Mobile in Alabama, pitched himself as someone who would lead the convention toward more racial reconciliation. Fred Luter, the first and only Black pastor to serve as president of the SBC, nominated Litton for the position. At the meeting Tuesday, Litton spoke fondly of how he and Luter have swapped pulpits. The crowd cheered after Luter’s speech in favor of Litton, in which Luter said Litton “brings a compassionate and shepherding heart. We need a pastor who has a love for God and God’s people.”

The following statement by Greear in the WAPO was amusing for me. I bet many TWW readers will figure out why;

Before they voted on resolutions, which included several proposed ones concerning CRT, SBC President J.D. Greear told the convention that it “looks like an SBC that expends more energy decrying things like CRT than they have done lamenting the devastating consequences of years of racial bigotry and discrimination.”

It’s odd how the past can be glossed over. According to Seminary presidents reaffirm BFM, declare CRT incompatible:

…Greear said. “While we lament the painful legacy that racism and discrimination have left in our country and remain committed to fighting it in every form, we also declare that ideological frameworks like Critical Race Theory are incompatible with the BFM. The Gospel gives a better answer.”

Dwight McKissic, a pastor whom I admire greatly, had said he would leave the SBC if Moher or Stone were elected. Here is what he said late last evening.

My thoughts on this matter.

I thought one of the more boneheaded moves by the SBC was to write the statement condemning Critical Race Theory. At the time this was being written, African American pastors were pulling out of the SBC. This only contributed to the exodus. First of all, it was not necessary to make that statement, no matter what they believed. To make matters worse, the statement was signed by 5 aging white guys. None of them took the time to investigate how SBC African American pastors felt about the issue. Basically, it was one of those white privilege moves that are being talked about when it comes to this issue.

Then we had Al Mohler quoting a slave owner on the practice of women preaching. 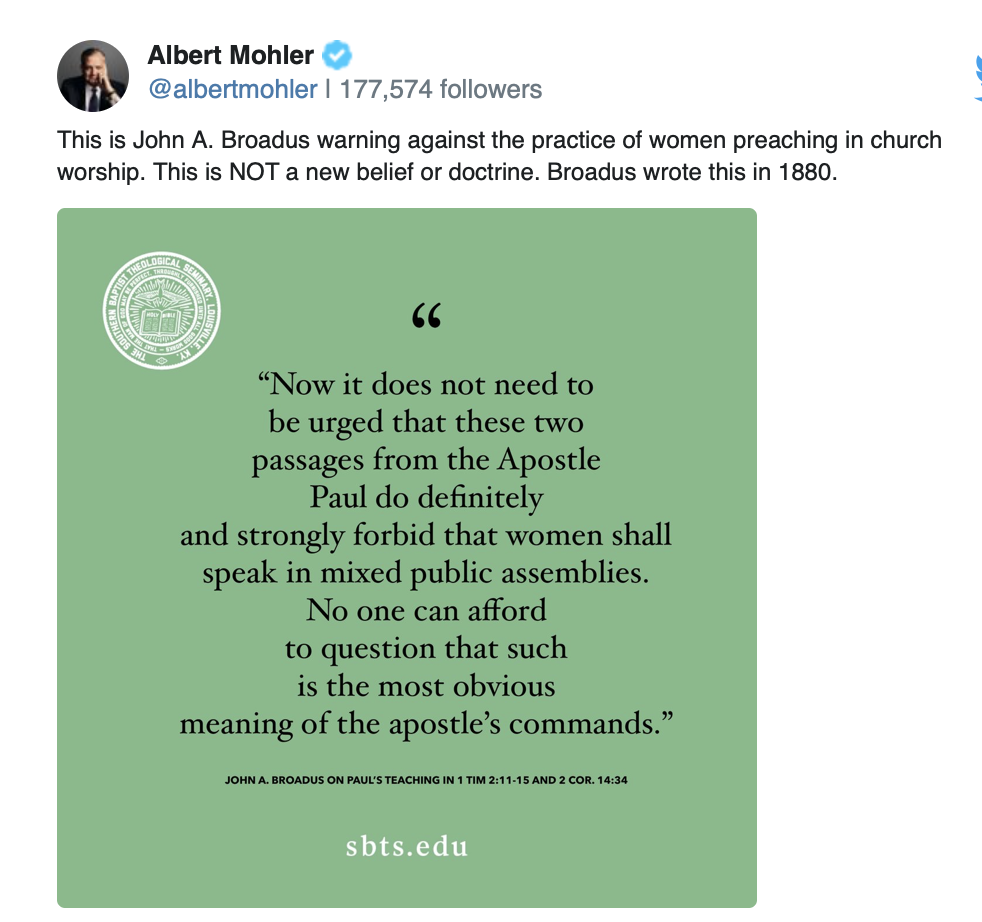 Here is a nice response from DR Warre Throckmorton.

What in the world is wrong with these guys?

What happened in the election of the president.

This election was fascinating and should be a warning that the SBC presidency only lasts one year unless there is a pandemic and then it lasted 2 years. I want to be honest. Although I hoped that Litton would win, I thought that the people would go for predictability which means Al Mohler should have won. He didn’t. He came in third. I slapped myself upside my head because three-way races are often unpredictable.

Here is how the elections went according to the New York Times article quoted above.

The election of the pastor, Ed Litton, was the result of what was effectively a three-way standoff for the leadership of the nation’s largest Protestant denomination. In the first round of voting on Tuesday afternoon, Southern Baptists rejected a prominent mainstream candidate and onetime favorite for the presidency, Al Mohler Jr., who received 26 percent of some 14,000 votes.

The race then headed for an immediate runoff vote that pitted an ultraconservative pastor from Georgia, Mike Stone, against Mr. Litton, who has largely avoided the culture wars. When officials announced the results from the stage — Mr. Litton bested Mr. Stone by just 556 votes, or about four percentage points — the floor erupted in a mixture of cheers and boos.

I was watching this in real-time. When Mohler was defeated, I began to think that Litton would win. I assumed that the majority of Mohler’s votes would swing towards Litton. I was right, but barely. My assumption was flawed. In fact, Mike Stone came close to winning, too close. And we should keep this in mind as we look to one year from now. I am surprised that Mike Stone, who is on the steering committee of the Conservative Baptist Network and former Chairman of the SBC Executive Committee, got so many votes. I predict that he will run again on a  platform like  “My SBC will Never Be Woke.” And he might win.

For now, let’s take a breather and enjoy Litton. I hope he deals well with the sex abuse issues as well as racial reconciliation.

Here is a helpful post from Religion News Services: Who is Ed Litton, the new Southern Baptist Convention president?