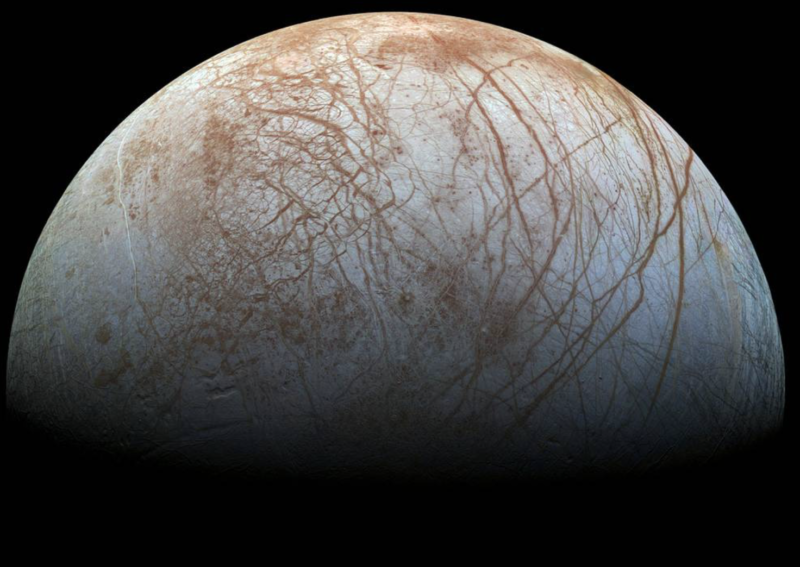 If a spiritual teacher says something that doesn’t make sense to you, you should always listen to yourself and not the teacher. A little common sense would end all cults.-Frederick Lenz

To members of Trinity Church who might read this:  I am a Christian who is a member of a conservative Lutheran church. My hope is that you might come to understand that your church leadership is rather odd. Good churches do not do stuff like is discussed in this post.

To quote Yogi Berra, “It’s deja vu all over again.” When I started this blog, there were two ministries we majored in: CJ Mahaney/Sovereign Grace Ministries and Mark Driscoll. I am on vacation in Florida. Todd kindly wrote two articles on Sovereign Grace Churches (Did the name change fool you?) I shall follow that up with reports of major creepiness at Trinity Church- Mark Driscoll’s latest attempt at founding and running a church in lovely Scottsdale, Arizona. I believe that it is possible that Driscoll was so surprised, as well as angered, by the downfall of Mars Hill that he has become obsessed with protecting himself from any sort of negativity. That extends to his family as well.

However, given his preaching and leadership style, he will continue to be under the microscope. Unfortunately, it is my opinion that we are looking at emotional instability in the pulpit.

The Trinity Church is run by the Driscoll family, including the kids and one spouse. There are no elders.

Let’s take a look at what the church website tells us.

Of course, Brother Mark is the lead pastor. His wife, Grace, is the head of women’s ministries. Landon Chase, who married Ashley Driscoll (Mark’s daughter) is a pastor at the church. Mark’s daughter, Ashley, runs the Real Faith program. Driscoll’s son, Zac, is the director of Interns.

The Driscoll kids are all walking with Jesus and helped plant The Trinity Church in Scottsdale, Arizona as a family ministry.

What in the world is a family ministry?  Apparently, it means a church in which Driscoll’s family members have been appointed into leadership roles. In the case of Driscoll’s church, his wife is also a  pastor and there are no elders who might turn on Driscoll as he implements his rather unusual ministry protocols. You can see Driscoll’s ministry hierarchy on the Evangelical Dark Web.

It appears that Driscoll has abandoned his Calvinista beliefs that John Piper admired so greatly.

Not unexpectedly, weirdness ensues. A teen boy kisses Driscool’s teen daughter which leads to the church hiring of a surveillance team paid for by church funds.

Warren Throckmorton posted  Mark Driscoll’s Cult-Like Actions: Julie Roys Enters the Chat and The Trinity Church May Be Watching You

The teenage son of Angelo and Katherine Manuele allegedly kissed Alexie, the daughter of the Driscoll. His entire family was thrown out of the church. According to Julie Roys:

The church then pressured other families to shun the Manueles, the couple says, and even filed charges with police against the Manueles for “threatening communication.”

The Manueles say they have threatened no one.

Trinity’s former head of security, Chad Freese, a cybersecurity expert and a former Marine, said Trinity hired a private investigator to surveille the Manuele family 24/7. He says teams, including pastors, tracked the Manueles as they went to local shops and businesses—even their own neighborhood.

On Julies blog, there is a message from one member of the church to Katherine, telling her that she will no longer be friends with Katherine. This decision was apparently reached “after much prayer.” How could this woman ditch her friend merely because her son kissed Driscoll’s daughter? I don’t know who she’s listening to during her sessions of much prayer but it most certainly isn’t God. She is being sucked into Driscoll’s bizarre behavior.

Thankfully, the Manueles’ family is going to fight back. According to Roys:

The Manueles say they’re going to fight the charge of “threatening communication” the church has filed against them. Plus, Angelo Manuele said he’s filed a charge of “false imprisonment” with Scottsdale Police for Brandon Anderson locking Vince in Anderson’s office and interrogating him.

According to Warren Throckmorton:

Church funds were expended to hire security personnel to follow them and report back concerning their activities.

He also states that the head of security, who eventually resigned, along with other staff and ‘members, claims the family was followed in the community during their day-to-day activities.

Chad Freese, a cybersecurity expert and a former Marine, said Trinity hired a private investigator to surveille the Manuele family 24/7. He says teams, including pastors, tracked the Manueles as they went to local shops and businesses—even their own neighborhood.

As Dee Holmes has often said, “This stuff reeks of the tactics of Scientology!”

It gets even weirder. It appears Driscoll has invented “the spectrum of trust.” Is he paranoid?

What? You never heard of needing to assess how close you can let people get to you on a scale of 1-10? According to Julie Roys:

On April 7, Freese said Mark Driscoll pulled the entire staff into a “training session.” Driscoll then reportedly drew his “spectrum of trust” on a dry-erase board, rating people’s loyalty from 0 to 10 to determine their access to Driscoll’s family.

Freese said Anderson then said that Freese’s security team was at a “level nine.” But because Freese and his wife had appeared in a picture posted on social media with former worship pastor, Dustin Blatnik, who reportedly had been fired by Trinity, Freese and his wife were a “level 8.

Given the fact that Mark Driscoll blocked me on Twitter years ago, I assume that I’m at “level 0” but I stand proud! This sort of thing appears to be paranoid behavior. Driscoll is apparently protecting himself from any person that he perceives will cause him pain. I would love to see the entire chart.

Dee Holmes (aka mirele) continues her one-woman protest outside of Trinity Church.

Dee has long been protesting outside of his church. She has ramped up her appearances in recent weeks. The following is a comment she made on Warren Throckmorton’s blog.mirele

* He filed charges of “threatening communications” against the M family for their Facebook posts.

* He allegedly spent $15K on hiring a security firm to spy on the M family, tail them, etc. I fully expect that Driscoll has told his staff and security to find out more information about me.

* His security team has a Be On the Look Out board of cards for people who are visitors to TTC and are a) all access, b) very limited access or c) completely forbidden.

* He also ranks people on their trustworthiness from 0 to 10. The 10s get to be in the inner circle. The 0s include people thrown out and presumably me as well.

…Oh, btw, David, Warren Throckmorton posted to his blog how Mark’s director of security, Chad Freese left, not because of the cops being called on the family, but because Driscoll authorized the spending of church money to hire private investigator(s). Back in the day, Scientology used to do that, they had Eugene Ingram on retainer and a bunch of other guys they’d hire to tail whoever was annoying them the most at the moment. 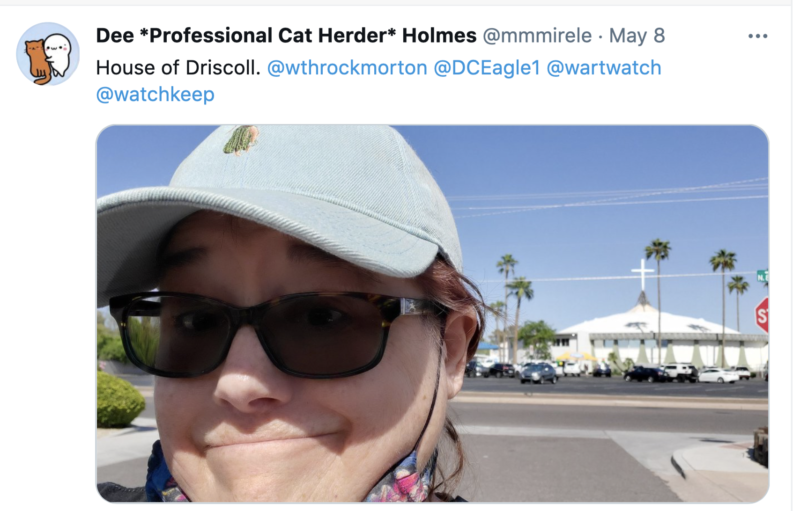 How many of you remember Mar Driscoll threatening to throw people under the proverbial bus while he was at Mars Hill? I find it odd that he has a beat-up old bus on the church property.  I wonder if this is his statement to a watching world? 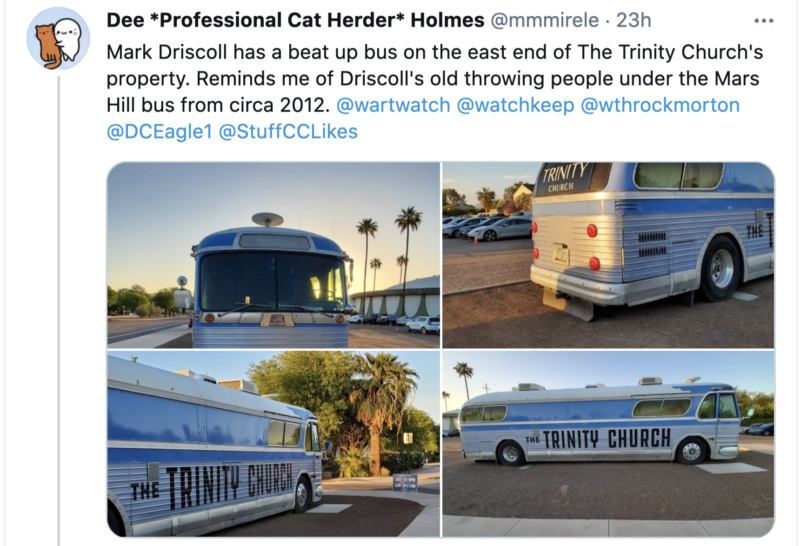 Please reads Julie’s blog post. It has lots of great information in it.

Now back to the beach with all of my family members, none of whom appear to be paranoid!