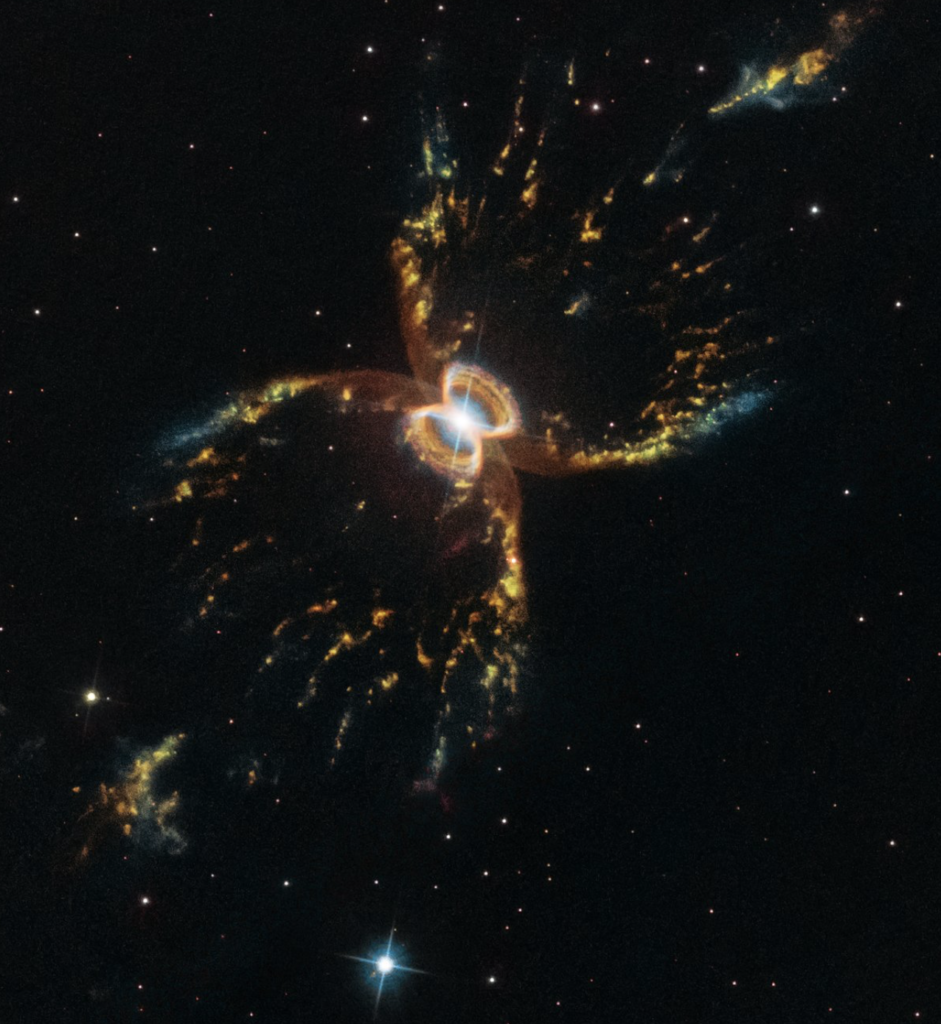 The Crab of the Southern Sky-NASA

“A proud man is always looking down on things and people; and, of course, as long as you are looking down, you cannot see something that is above you.”
― C.S. Lewis, Mere Christianity

Pride…the besetting sin of all mankind. I still remember reviewing CJ Mahaney’s book, Humility, True Greatness. In my opinion, Mahaney was the worst possible example of humility as he presided over one of the worst evangelical scandals of the last 100 years (in my opinion.) In my years of blogging, I have come to the conclusion that, when a pastor steps down, he claims the *sin of pride* when, in fact, the real sin is covered up. If *pride* was a true disqualifier, there would be few pastors left standing tall in the pulpits.

The Christian Post’s Leonardo Blair wrote an eyeopening post titled Dallas megachurch pastor who confessed to sin of pride resigns. TWW last left Wagner on leave due to pride in Todd Wagner, the Controversial Pastor of Watermark Church, Steps Away *for a Season.* For What? Did You Know This Church Is Closely Aligned with 9 Marx (sic)

Let’s take a look at what wasn’t said at that time.

Todd Wagner’s *I ain’t saying nothing to you pew-sitters while stepping away for a season* talk.

Here is my synopsis of his talk. I am quoting him except for my sarcasm which should be evident. (The talk has been removed from the website.)

Todd and the elders are *cooking the books.*

Let’s be frank. No one steps down for some innocuous sin. There is no one who does not struggle with pride and other sins. Read Martin Luther. I had a pastor once who talked about *cooking the books* when it comes to sin. I think that is what is happening here. By cooking the books, we delude ourselves that our sins are really better than the sins of others. We’re OK. Nothing to see here.

Think about what he said.

He has presented himself as the guy who didn’t really do anything bad. In fact, he loves you all so much that he worked himself to death. The elders don’t want anyone to gossip. There is a good reason for saying this. I believe that something really bad happened and they are not going to tell the church what it is. Also, keep an eye on that new guy they’re bringing on.

Now, let’s take a look at what he’s saying this time. The quotes come from the above linked Christian Post.

It was a miraculous experience.

Wagner explained that he had been contemplating the decision to resign for more than a year, during a process “that I can only describe as miraculous.”

Apparently, just a month prior to this miracle of an experience, David Leventhal, a major player in the board of elders, resigned because he could no longer trust Wagner.

David Leventhal resigned on March 26. Leventhal cited a lack of trust in Wagner’s ability to continue leading the megachurch.

“On March 26th, I shared this with the elders. I shared that the reason for my resignation was a loss of trust in Todd’s ability to lead in the role of pastoral elder and senior pastor,

Weirdness then ensued as Wagner rubbed the back of Leventhal as Leventhal discussed his resignation.

Was it weirdness, creepiness, or a statement of Wagner’s authority?

I shared that the reason for my resignation was a loss of trust in Todd’s ability to lead in the role of pastoral elder and senior pastor, which was the direction the elders had been wanting to move to,” Leventhal said as Wagner rubbed his back and struggled to maintain his composure.

If you go to this link, you can watch the entire, dragged-out meeting of the elders with the church members. I got a good pic of Wagner rubbing Leventhal’s back. 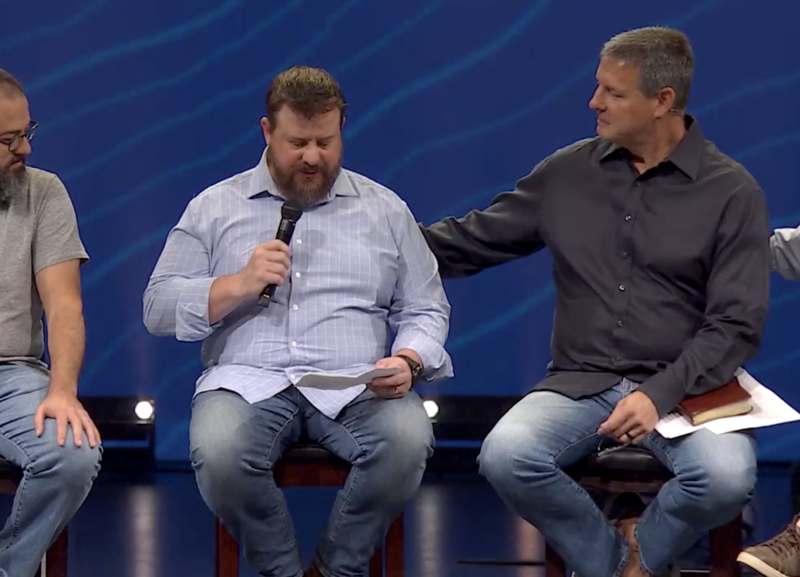 Here is the Leadership Statement on the resignation of Leventhal and Wagner: They are leaving their positions, sort of…

On Sunday, April 25 we shared three significant transitions to our leadership team with our church body.

David Leventhal resigned his position as Elder and staff member on March 26. His resignation was due to an erosion of trust in Todd Wagner’s ability to lead in the role of Senior Pastor and Elder. David arrived at this decision in concert with his wife, their family, and their community group.

Separately, in the following weeks, Todd, alongside his wife, Alex, reached the conclusion that the time had come for him to step down as Senior Pastor and Elder. Todd and Alex had been seeking the Lord for over a year to discern what their next step of faithfulness would be, and through conversations with family, friends, fellow Elders and their community, God gave them clarity that now was the time for a transition. Todd submitted his resignation to the Elder team on April 17, and it was accepted on that day.

So guess what? Wagner, who is so full of pride that he had to resign (if you believe that line), is now going to be an Elder Emeritus along with Leventhal and his well rubbed back.

Despite a challenging season, David and Todd are at peace with one another and will serve together on the Elder Emeritus team. We are currently processing how each person can best serve the mission in the days ahead.

But, hey…all is cool. They have the staff they need. Who cares that they lost their senior, and might I say, controversial, leader?

We are confident we have the staff team and lay leadership in place to lead us through this next season as we continue our mission to call all people to be fully devoted followers of Christ.

David and Todd just needed to *spend time with his family,* the ultimate excuse of men who are avoiding stating the real reason they stepped down.

Todd and David plan to serve Watermark in any way that would be helpful on the Elder Emeritus team. Additionally, they will spend time with their families preparing for whatever the Lord has next.

Since it’s my blog, I get to give my opinion first… Not a snowball’s chance in hell! There’s some really bad mojo going on here and they ain’t telling the church members what’s what.(In my opinion.)

Then, Wagner warns the congregation that savage wolves will come among them since he has stepped down!

Julie Roys wrote Pastor Todd Wagner Resigns from Watermark Amid Turmoil. She noted something that wigged me out. Folks, if you hear nonsense like this from the pulpit, go find a normal church.

He then applied the words Paul used to describe his apostolic ministry in Acts 20:26-32 to his own tenure at Watermark:

“With a clear conscience, I’m going to say this to you,” Wagner said. “‘Therefore, I testify to you this day that I am innocent of the blood of all men. For I did not shrink from declaring to you the whole purpose of God.’”

Wagner also warned the congregation with words from the passage, stating that “after my departure savage wolves” will come among you, “and from your own selves men will (rise up), speaking perverse things.” Then, modifying Paul’s description of his three years spent in Ephesus to Wagner’s 22 years at Watermark, Wagner added, “Therefore be on the alert, remembering that night and day for a period of 22 years I did not cease to admonish each one with tears.”

And, of course, there was the obligatory standing ovation (Don’t try to tell me it was spontaneous. I know how these things are planned.)

Of course, during the standing O, they had an elder tearfully claiming that Wagner demonstrated what faithfulness looked like better than any other. If so, why was he sidelined?

The congregation at Watermark responded to Wagner with a standing ovation. And Elder Kyle Thompson tearfully described how God had used Wagner “to disciple and grow and to model for me what faithfulness looks like more than anybody else, period.”

The elders then ended on an odd note, warning people not to judge whose version of events is correct.

This statement, more than any other statement, led me to believe that something is really wrong here. Why would God conceal sin?

Elder Mickey Friedrich then urged the church not to “try and judge whose version of events is right or wrong. That’s for God to reveal or conceal.” He added that “there are just too many layers” and that even Friedrich and Thompson “land at a different place than (Leventhal and Wagner) regarding why we’ve arrived here.”

I have heard that this church is quite controlling of its members. One person said she was required to disclose her salary to her care group. She was also told by her care group that she shouldn’t move to get a better job. I found that really weird (a word that I have used a bunch when writing about Watermark.) I love to read comments on posts online. The Christian Post is one of the few that continues to allow comments. I was startled to read this comment since I know it is not the person who contacted me. I think it is indicative of the rather controlling nature of the church and that may be the key to this whole mess. It’s all about control…

Were you asked to disclose personal financial information (tax returns, paystubs, etc)? Ohhhhhhh yes. This was the one thing I flat out refused to do because that was no one’s business but mine. This was something that was heavily pushed in the CGs and pushed from the pulpit too. The people on your CG needed to know everything about you, including how much you earned, spent, and saved. Because money was one of the most personal things about you so it was an area of your life that desperately needed to be spoken into biblically. Although, please chapter and verse where it says “thou shalt reveal the contents of thine pocketbook.” I refused to do this for 2 reasons: 1) None-ya-business 2) I knew for a fact that if I told the members of my CG what I earned in a year, life would get really awkward really quickly. I did not want to make people feel uncomfortable.Were you required to consult your community group before making certain life decisions (Who to date, marry; what job to take; whether to leave a job; where to move, etc)? Yes, yes, yes, yes. We needed to tell our CG about everything so they could speak into our lives and our decisions biblically. This was most important in our major life decisions. I experienced this because during my time at WM, I was trying to apply for jobs at ‘X’ Corporation. I told this to my CG, and they would ask “do you really think this is what God wants you to do? Should you be moving jobs? God has you at ____ for a reason during this season.”