[Prosecutor] Eazer drilled Lindblad [ARBCA Pastor Don Lindblad, a witness for the defendant, Tom Chantry] on a statement he had made in a deposition with her where he said, “We (ARBCA) believe the charges were not true.” Eazer asked Lindblad if ARBCA would take that position today. Lindblad said “yes.”
-Note from day 9 of the first trial of Thomas Chantry – Source

On February 25, 2021 the Arizona Court of Appeals reversed the conviction of Thomas Chantry on four counts of molestation of a child and remanded the case for a new trial.

In the words of Brent Detwiler, a fellow blogger and an observer at the two trials of Thomas Chantry, the Arizona Court of Appeals did not rule on the innocence of Thomas Chantry; rather, “they ruled on the admissibility of evidence at the trial. In fact they affirmed the evidence, Their ruling did not exonerate him of crimes.”

Cheryl Watson is a former member of an ARBCA church. She has a website where she has done an excellent job of documenting ARBCA’s coverup of the Thomas Chantry sexual abuse scandal and the resulting demise of ARBCA. You can view her website here: Ephesians 5:11.

Cheryl’s most recent blog entry, AZ Court of Appeals Reversed Thomas Chantry’s Convictions of Four Counts of Molestation and Remanded the Case for a New Trial, includes the following information along with a link to the complete Court of Appeals decision.  I would encourage you to read the complete document. Cheryl wrote:

Here are two of the most relevant quotes, but I encourage you to read the entire document:
“¶1 Thomas Jonathan Chantry appeals his convictions and sentences for four counts of child molestation. Because Chantry’s convictions were obtained with the use of impermissible ‘other act’ evidence, we reverse and remand the matter for a new trial.”

“¶27 We agree with Chantry that the superior court abused its discretion by admitting, under Rule 404(b), evidence of Chantry’s excessive, sometimes bare bottomed, spankings of J.W., W.W., and D.L. After prohibiting the State from offering the other-act evidence to show Chantry had an aberrant sexual propensity to commit the charged crimes, the court should not have permitted the State “to raise this same inference under the rubric of ‘intent.’” State v. Ives, 187 Ariz. 102, 110 (1996).”

The Decision of the Court can be read here: https://law.justia.com/cases/arizona/court-of-appeals-division-one-unpublished/2021/1-ca-cr-19-0427.html When I have obtained a copy from the court, I will add it to Scribd and embed it.

The Arizona Court of Appeals decision is undeniably a big victory for Chantry. He knew he was fighting a court battle where the odds were not in his favor and he admitted as much in a phone conversation with Dabney Olguin.

Below is a chart that shows nation-wide statistics for criminal appellate decisions in 2010. Obviously, the numbers would not be exactly the same for 2020, but I will assume they are close to the same. In 2010, 63 percent of appeals filed were actually reviewed on their merits. Of these 43,952 cases, 35,726 were affirmed and 8,226 were reversed/remanded/modified. That works out to 18.7 percent of appeals that were reviewed were successful. If one considers all cases filed, the successful appeal rate was only 11.8 percent. 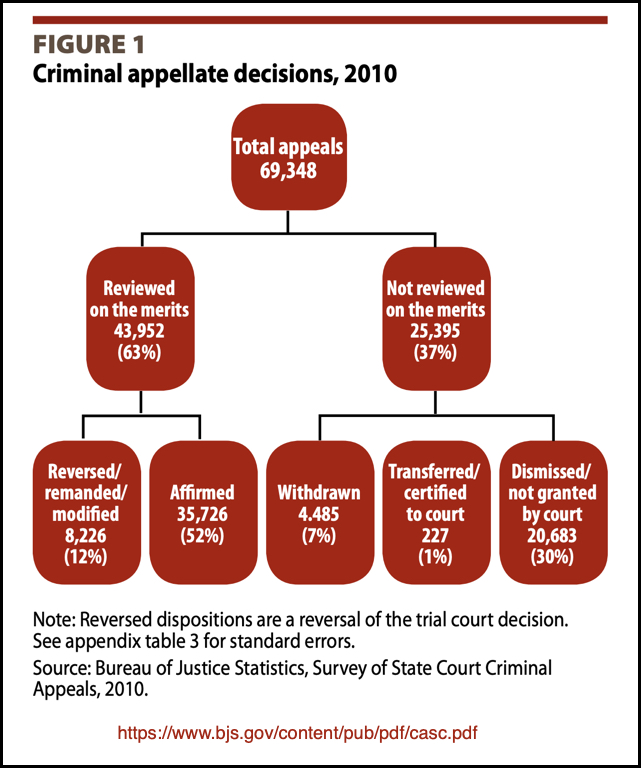 Unfortunately, it didn’t take long for fans of Thomas Chantry to crawl out from the rocks they were under and start in with their ridiculous (and for the most part, anonymous) comments. Here is a sampling of what I have seen from an individual who just started an anonymous account, calling himself “In the Know.” 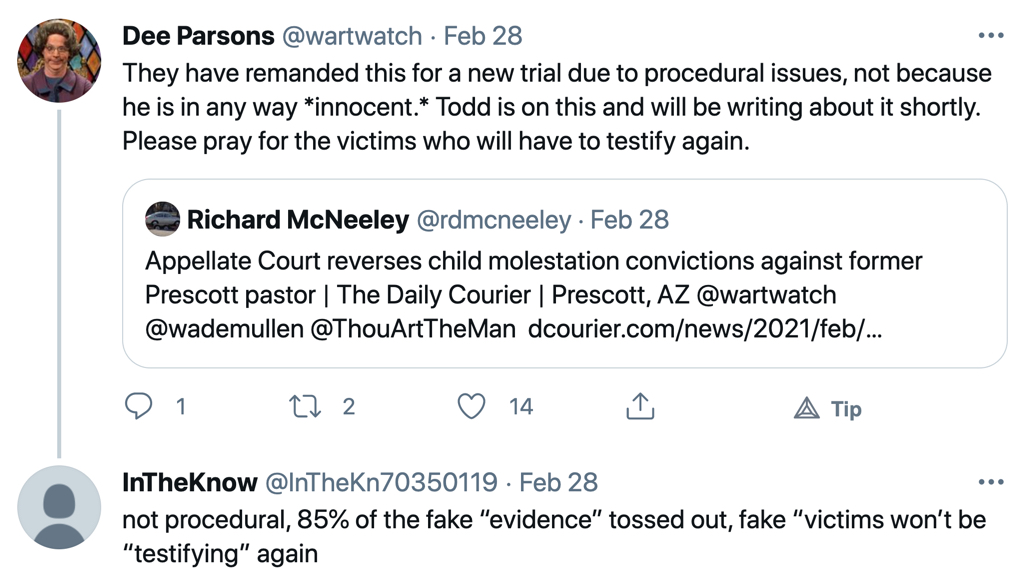 “In the Know” has demonstrated that he actually doesn’t know much. The ruling by the Arizona Court of Appeals was not “as big a slap down of a corrupt court as has ever happened.” As shown above, cases are reversed, remanded, or modified in nearly twenty percent of the cases that are heard on merit. This doesn’t mean the lower case is corrupt, nor is it a slap down. Legal matters are complicated and it takes years of schooling and experience to properly interpret case law. While I am not thrilled that Chantry will have a third trial, in the bigger picture of things we should be happy that our legal system is weighted in favor of the defendant.

Innocence has not been confirmed by the ruling of the Arizona Court of Appeals. They simply said that evidence that was allowed into the trial should not have been allowed in under Rule 404(b).

I am no legal expert, but it appears to me that the Judges who heard the appeal were doing their job. The appeal system is in place to ensure the defendant receives a fair trial. In Chantry’s case, they ruled he did not receive a fair trial, therefore Chantry is allowed another trial. Simple as that. It is my understanding that the State also has the option of appealing the decision of the Arizona Court of Appeals to the State Supreme Court.  We will wait and see what happens.

I found “In the Know’s” comments about fake evidence and fake victims to be repulsive. I have sat through two trials and listened to all the evidence. I have heard the victims tell their painful stories. I have listened to the tortured parents of victims relate the tragic details of their family’s lives torn apart by the actions of a man who was a “fake” pastor. Anyone who labels these people “fake” victims is, in my opinion, a heartless, cold bastard that is a sad excuse for a human being.

Remember that Thomas Chantry was convicted by a jury of his peers in his first trial of two counts of a Class 6 felony of Aggravated Assault against a child under 15 years of age. These are two of the “fake victims” that “In the Know” maliciously slanders.

If we review the two trials Thomas Chantry has now been through, 23 of the 24 jurors have voted to convict him of molestation of a child. The lone juror who did not vote for conviction was charged with perjury and caused a mistrial. 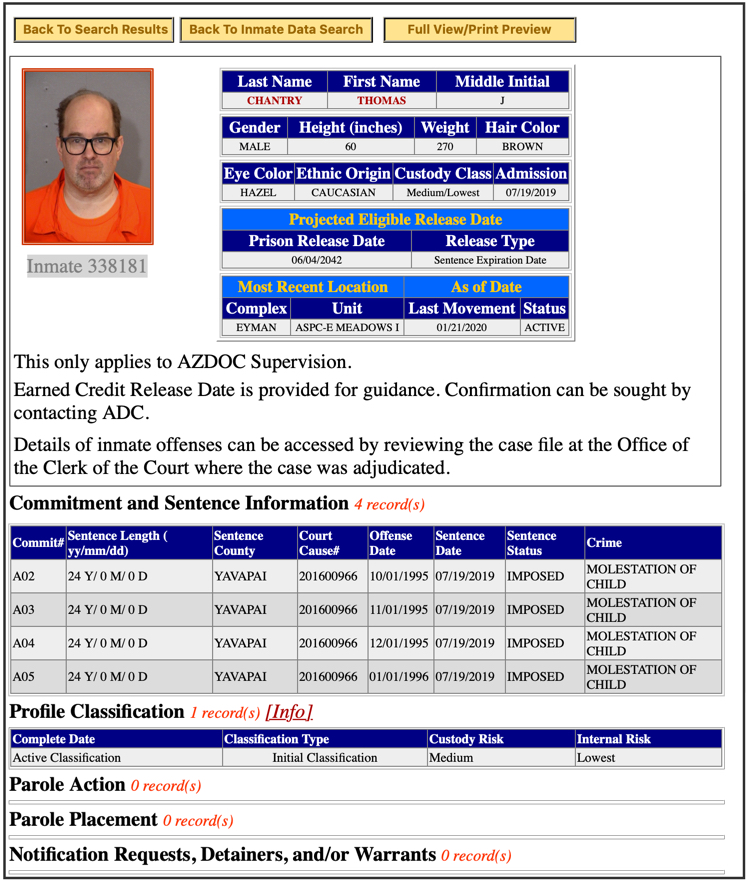