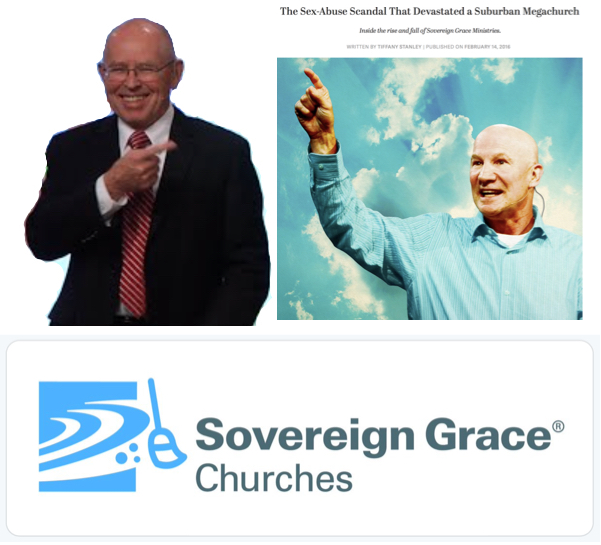 “He had, in fact, got everything from the church and Sunday School, except, perhaps, any longing whatever for decency and kindness and reason.”
Lewis, Sinclair. Elmer Gantry. Kindle Edition.

“I have been struck by how often we are told that Jesus saw. Matthew tells us that Jesus was going through all the cities and villages and that “seeing the people, He felt compassion for them, because they were distressed [harassed] and dispirited like sheep without a shepherd” (9:36 NASB).
Jesus continues to see, and he invites us to stand with him and see—to feel the pain, the sorrow, the crushing, and the agony of precious sheep who have no shepherd, no caregiver, no comforter. Much of Christendom today seems less interested in seeing as Jesus saw, less inclined to enter in, and far more interested in gaining power. We have acquired fame, money, status, reputation, and our own little kingdoms. We have read too many headlines about Christian leaders and Christian systems that look nothing like our Lord. I fear we have lost our way. It is time for those of us who name his name to stop and listen to our King, who was moved with compassion, a true Shepherd longing to both feed and enfold the sheep. We follow a God who listens to us and weeps with us. That is evident in the life of Jesus. The incarnation is perhaps the greatest expression ever seen of empathic listening. Jesus came and pitched his tent among us—a virtual refugee camp. That meant drinking our water, sharing our chores, experiencing our losses, joining in our laughter, and weeping with us when we mourned. We need to learn to listen as he does. You see, he knows what it is like to be you. He has given you the gift of being heard and known and asks you, in turn, to give it to others. He longs for us to walk with him, caring for the distressed, the fleeced, the ones damaged by violence and tossed aside. He desires us to look with his eyes of love and hear with his keen ears. He has invited us to labor with him and to be with others just as he was.”Langberg, Diane. Redeeming Power (pp. xi-xii). Baker Publishing Group. Kindle Edition. (Emphasis mine.)

On December 8, 2020, Phoenix Seminary released a video on Twitter (seen below) hailing the release of Wayne Grudem’s 2nd edition of Systematic Theology.

Today is the day! Congratulations @waynegrudem on the release of your 2nd edition Systematic Theology.

We asked some of Dr. Grudem's friends to share a word of encouragement on this great accomplishment.

Enjoy the video and please share how Dr. Grudem's work has impacted you. pic.twitter.com/W9MPKdcBUP 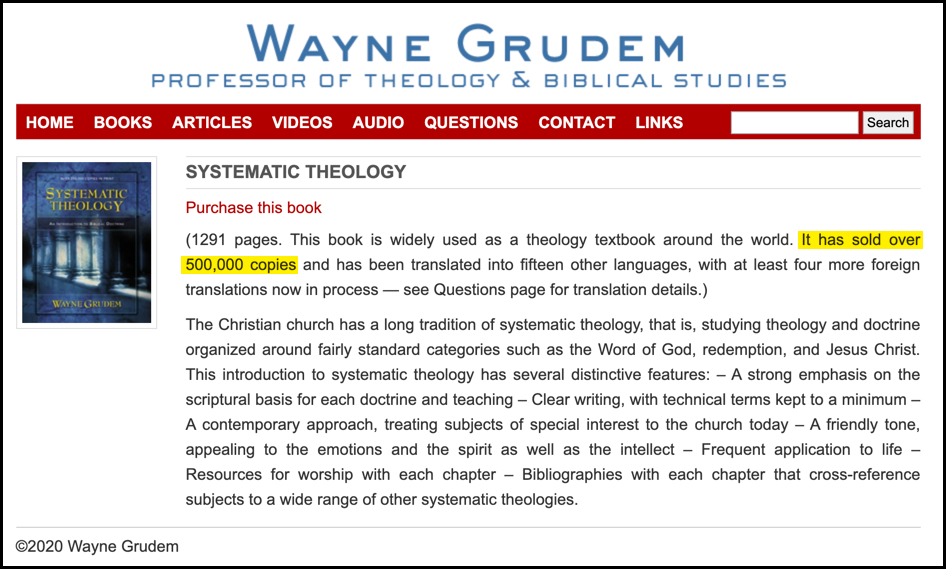 I was not surprised that Phoenix Seminary produced the video. Grudem’s first volume on Systematic Theology was wildly successful, selling over 500,000 copies. (The cover of the 2nd edition states that over 750,000 copies have been sold.) The video, effusive in its praise of Wayne Grudem, was expected from Phoenix Seminary leaders who, like any institution of higher learning, will attempt to capitalize on the release of a new book by a popular author whom (I believe) still serves in a limited capacity as a  Professor at their Seminary. The video should serve as a useful recruiting tool, indeed if you click on the link to Phoenix Seminary in the video you are taken to a page where you may obtain a free download of chapter 45 from the new book by merely providing your name, email, and checking a box which gauges your interest in enrollment at Phoenix Seminary.

However, Phoenix Seminary, unlike a secular institution, represents Christ to the onlooking world and therefore, prior to embarking upon a publicity campaign based on the release of Grudem’s book they owe it to their staff, faculty, students, and the greater cause of Christ to conduct at minimum a cursory check of the author’s life to ensure their colleague and well-known author has no potentially embarrassing issues in his life. Had the leadership of Phoenix Seminary done this they would have discovered that Wayne Grudem has, in my opinion, several issues that draw his character into question.

Chief among these issues is Grudem’s ongoing and strident support of C.J. Mahaney, a pastor who once was the Executive President of Sovereign Grace Ministries and Senior Pastor of Covenant Life Church. Mahaney has been credibly charged with covering up the sexual abuse of children in his denomination while he held the office of Executive President.

I took Phoenix Seminary up on their offer to download a chapter of Grudem’s new book for free. Included in this download was a lengthy list of endorsements by well-known men (and one woman – Dr. Sharon James, social policy analyst, the Christian Institute, UK, author and speaker. – I have never heard of her.) I was stunned to see that the lengthy list of endorsees included C.J. Mahaney!  What is Grudem thinking?  Is he attempting, once again, to legitimize his good friend?

Mahaney starts his endorsement with flattery, which is in character with his standard method of operation. What follows is interesting.  Are you aware that Mahaney utilized a ghost-writer for “his” books? I am not certain if the man has ever had an original thought in his life, and it appears he has stayed true to form in his endorsement of Grudem’s book.  Compare Mahaney’s endorsement to that of John Piper’s endorsement:

Do you see how they are similar but not exactly the same; of the same format but not plagiarizing? (See what I did there?) I am left to wonder if Ceej got in touch with Piper and asked for some helpful ideas on writing an endorsement, so Piper forwarded Ceej his endorsement? It’s rather eerie.

Speaking of eerie, who would include an endorsement from a guy who has been moldering in the grave for six months now? Wayne Grudem, that’s who. True enough, the endorsement states that it was actually an endorsement from the first version, but is it propper to cut and paste that to his revised version?  The first version has been out for years. Who is to say that were Packer still alive he would endorse the 2nd edition?  My feelings are it’s in poor taste to include it, yet not as crass as including an endorsement from Mahaney; it’s not advisable, yet somewhat understandable. (See what I did there? Sorry, I couldn’t help myself.)

Other men who endorsed Grudem’s book are Southern Baptist Theological Seminary professors Tom Schreiner and Bruce Ware. Both men (like Grudem) also made the trek to Mahaney’s runaway church plant in Louisville in 2013 to express their support for C.J. Mahaney. None of them have, to my knowledge, ever publicly retracted their support for the man who has (in my opinion) covered up the sexual abuse of children in his denomination and then lied about it.

The Charismatic Terry Virgo also endorsed Grudem’s book. When we last heard of Virgo he was seen urging Covenant Life Church to hire his good buddy P.J. Smyth to replace Joshua Harris. You may recall that P.J. Smyth was deeply involved in helping his father, John Smyth, avoid legal entanglements when in 1997 he was arrested and faced charges of killing a 16 year old boy, Guide Nyachuru, who was found dead in a swimming pool at one of the holiday camps in 1992. John Smyth was also accused of injuring the dignity of five other boys who alleged they had been subjected to savage beatings. Shortly after P.J. Smyth was installed as the new pastor at Covenant Life Church bloggers broke the story of his knowledge and assistance in his father’s problems. P.J. Smyth changed his story several times, eventually claiming amnesia. Soon thereafter Smyth and CLC parted ways. Of course they sold it to the church members as a church plant! John Smyth had a long history of abusing teenage boys and died just before he was to return to the UK to face an investigation. You can read about it here. So, thanks for the great recommendation, Mr. Virgo. Your endorsement of Grudem’s latest book inspires no confidence from me.

Here is an email I wrote back in 2013, urging Grudem not to speak at C.J. Mahaney’s runaway church plant. Grudem was too busy to reply to a lackey such as me, but he delegated the task to one of his lackeys. Note the sentence “Dr. Grudem is speaking specifically so that he can signal support for CJ in the face of unjust accusations.”

Grudem has had over 7 years and a mountain of evidence to reconsider his ignorant response. Apparently, he still thinks the accusations are unjust. To which I can only say, I certainly would not purchase a book written by this man. 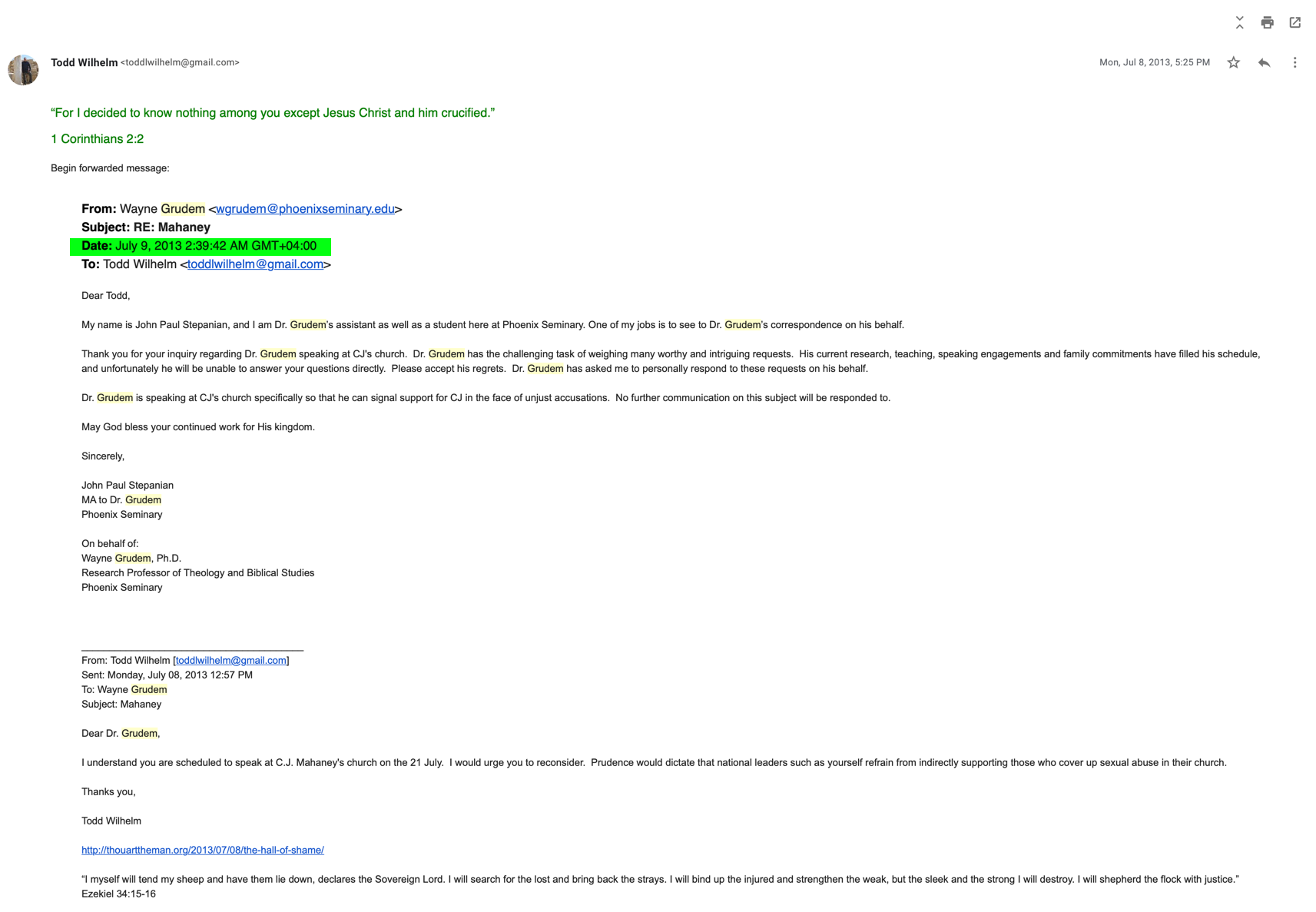 It is apparent to me that Grudem values the friendship, flattery, and financial support of C.J. Mahaney more than he values the lives of those who were sexually abused. Financial support, you ask? Yes. While I don’t know how much money Mahaney funneled, it was significant. 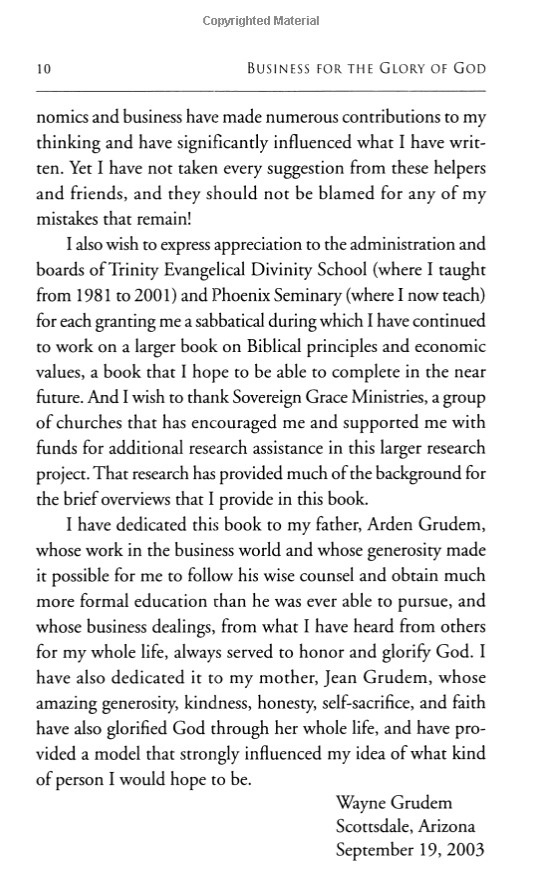 The statement below was taken from the SGM Survivors website. I believe Paul K. to be reputable and knowledgeable. He used to attend Covenant Life Church. 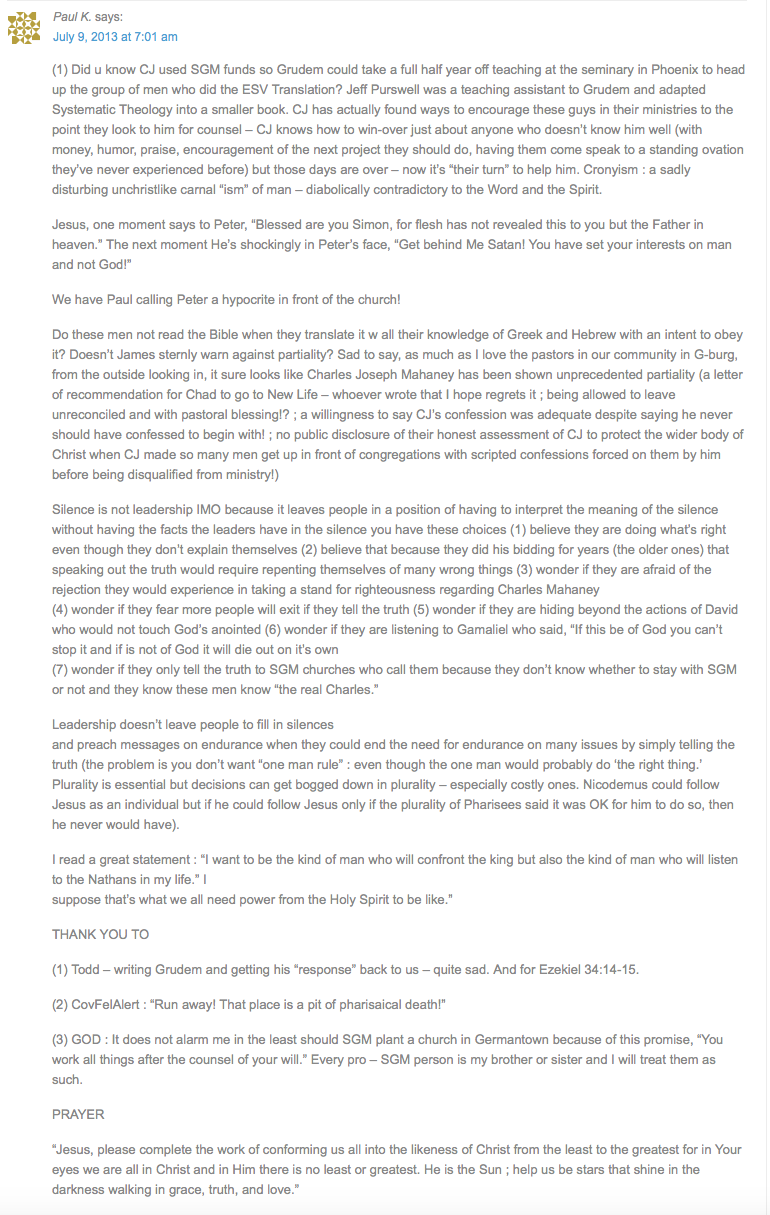 Here is the recording of Wayne Grudem speaking at C.J. Mahaney’s runaway church plant in 2013.

I wish to draw your attention once again to the video produced by Phoenix Seminary. This clip is of Ray Ortlund and I think it does an amazing job of revealing the proud, pompous hearts of many men in the Gospelly Celebrity Club. Not content to just praise Grudem, Ortlund has to insert himself into the narrative and boldly claim that he and Wayne have stood shoulder to shoulder and will be ushering in the 3rd Great Awakening!

I liked the comment Tweeted by Brent Detwiler in response to this video of Ortlund:

I also wanted to include this poignant statement from former Sovereign Grace member, Pam Palmer. She knows of what she speaks. Read the last 4 lines. Wayne Grudem is providing cover for those who have conspired to coverup the sexual abuse of children, yet all these leaders continue to support him. This must stop! 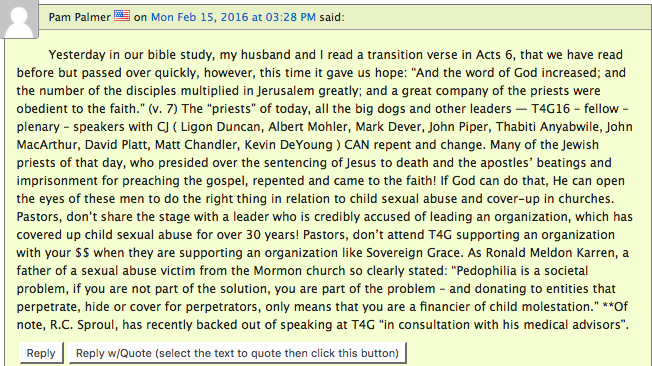 Mahaney, in a statement released on May 22, 2014, denied he had ever conspired to protect a child predator. 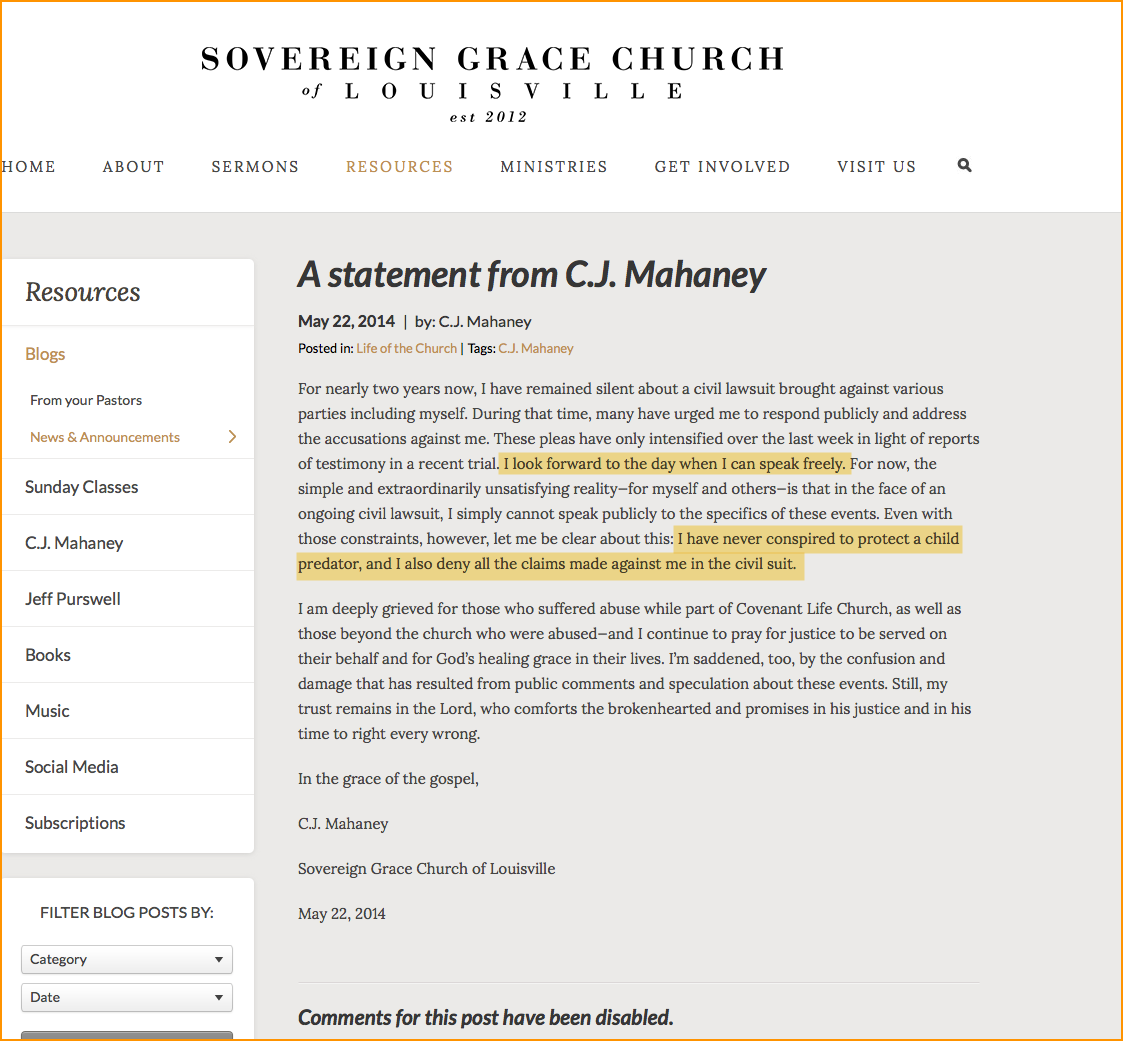 In spite of Mahaney’s statement that “I have never conspired to protect a child predator, and I also deny all claims made against me in the civil suit,” overwhelming evidence has been provided (and more evidence will continue to be revealed) to the contrary. Below is one such piece of evidence. 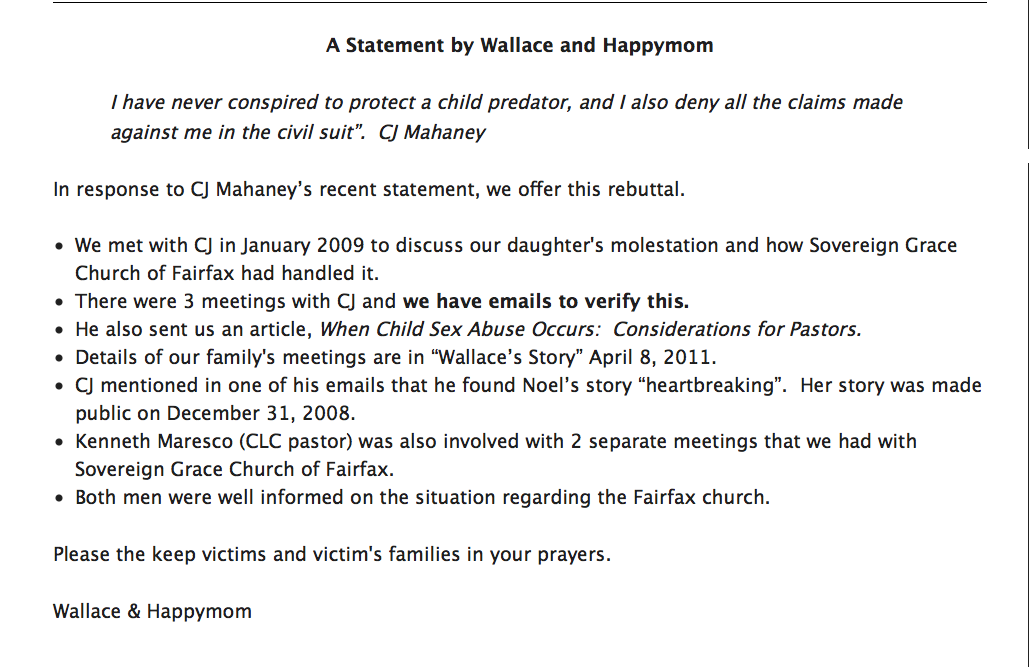 Finally, here is a letter from a young lady who is a graduate of Cedarville University. She gets it. She refuses to support those who support sexual abusers and their enablers. I pray her tribe greatly increases! 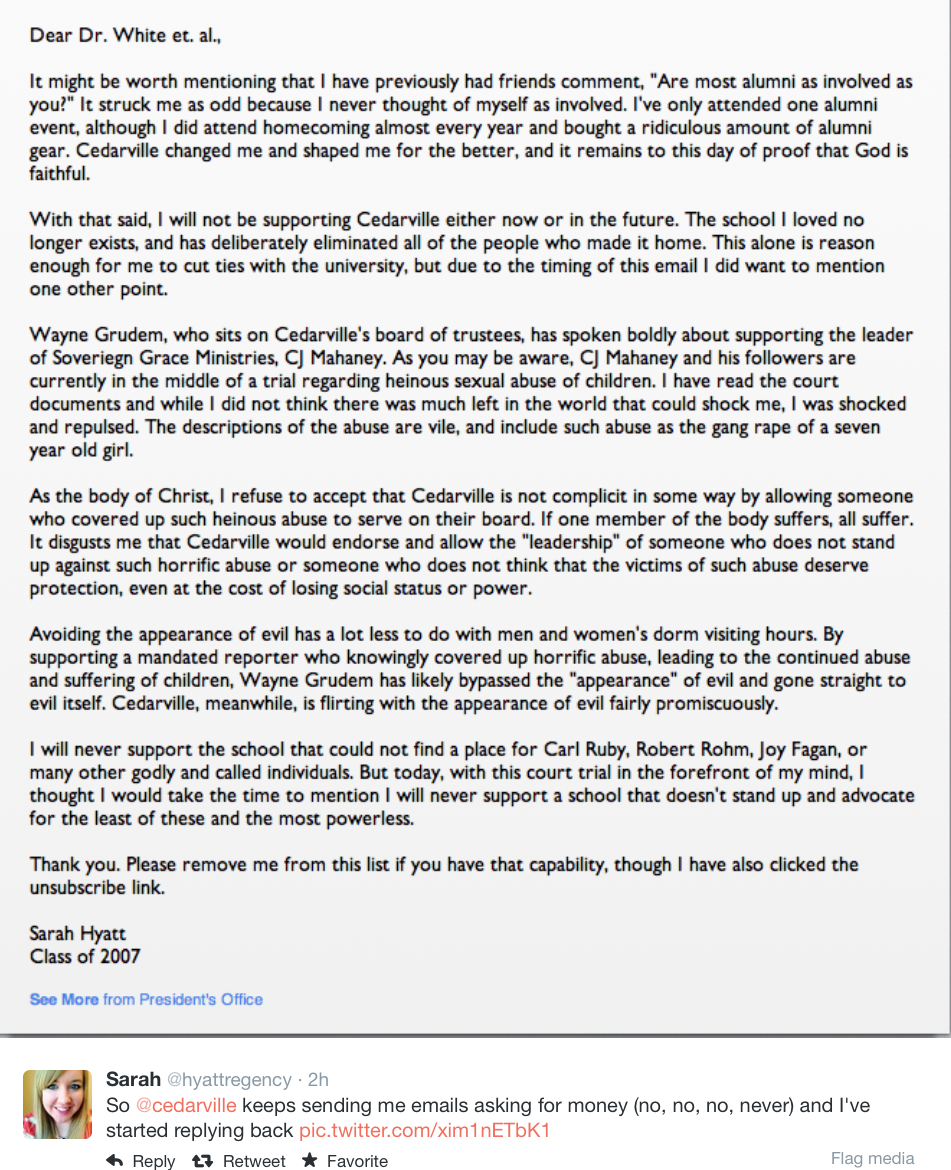 I have much more that needs to be said about Wayne Grudem, but I will have to say it in another post.